With the world still watching for news out of Ukraine, today the top trends forecaster in the world spoke with King World News about the ramifications of the West’s defeat in eastern Ukraine. What he had to say will surprise a lot of readers.

On the heels of the Federal Reserve revealing China dumped $76.9 billion of U.S. Treasuries, today one of the top economists in the world sent King World News an incredibly powerful piece warning that Western central planners are about to unleash economic hell on Earth. Below is the fantastic piece from Michael Pento. 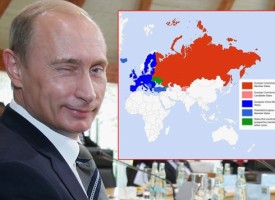 With the world still awaiting the outcomes in Greece and Ukraine, it appears that Putin’s brilliant tactics in Ukraine have confused the West and become a worry for NATO.

With the Dow near the 18,000 and the price of gold, silver and crude churning, today one of the greats in the business sent King World News a fantastic piece that covers everything from the gold and silver markets to concerns about financial hand grenades rolling around the globe.

With people around the world still nervously awaiting the outcome in Greece and Ukraine, today King World News is featuring a piece from one of the greats in the business. What we want to know is: Can it really be this easy?

With many global stock markets near record highs and the crude oil market struggling, many people are wondering if the there are reasons to worry about overvalued paper financial assets? Well, the remarkable illustration belows reveals why there is trouble ahead for major markets.

As the world continues to digest breaking news out of Greece and Ukraine, the Godfather of newsletter writers, 90-year old Richard Russell, warned that all major countries are now at war with one another. Russell also discussed what this will mean for gold and the currency markets.

With the world focused on news out of Greece and Ukraine, today one of the greats in the business told King World News that the West’s great charade is coming to an end. He also addressed the strange timing of the raid in the gold and silver markets and more.

With the price of gold and silver getting trashed, today a 50-year market veteran spoke with King World News about the real reason for today’s gold and silver smash. He also said that Dr. Paul Craig Roberts is right and warned that 2015 will be the year of the great reckoning.

With the eyes of the world focused on the war in Ukraine and the stalemate in the talks between the Greeks and the EU, today former U.S. Treasury official, Dr. Paul Craig Roberts, explained to King World News why Russian President, Vladimir Putin, has just warned the West that it faces terrifying consequences.

With talks between the EU and Greece reaching the boiling point, a former White House official warned that the Greek crisis is now a threat to the entire global financial system.

Today a 40-year market veteran sent King World News an incredibly important piece that warns we may now be headed into the most shocking panic in world history. This piece exclusively for KWN also exposes the continued mainstream media and government lies as the world stands on the edge of a precipice.

On the heels of another wild trading week in world markets, today one of the top economists in the world sent King World News an incredibly powerful piece warning that Europe may be engulfed by massive bank runs and economic chaos.

Today the man President Ronald Reagan called upon to help save the United States from collapse in 1981 made one of the most terrifying predictions of 2015. Below is the dire warning from former White House budget director, David Stockman.

With the Dow closing above 18,000 and the price of silver surging, along with crude oil, today one of the greats in the business sent King World News a fantastic piece that covers everything from the gold and silver markets to concerns about deflation and a global depression.