As the world edges closer to the next crisis, today the man who has become legendary for his predictions on QE and historic moves in currencies and metals told King World News that the world is now at the end of a Grand SuperCycle.

THE END OF A GRAND SUPERCYCLE
February 17 (King World News) – Egon von Greyerz:  There is a secret investment that virtually no investors are aware of. This is an investment that despite government manipulation and being besmirched by MSM still has outperformed all asset classes in this century. But it is not just an investment, it is the best hedge that anyone can buy against:

This asset costs almost nothing to hold and can be held virtually risk free outside the banking system.

This asset has some wonderful attributes:

It is an asset that has a limited supply and an increase in demand cannot be met by more production but only by higher prices.

THIS ASSET IS A HEDGE AGAINST IRRESPONSIBLE GOVERNMENTS
There are periods when monetary policies are sound and when the price of this asset is stable. But other times, like in the last 100 years, when credit expansion and money printing have been rampant, this asset appreciates significantly measured in paper money. In real terms this asset doesn’t go up in price. It just maintains stable purchasing power.  But measured in paper or fiat money, the asset appreciates significantly as central banks destroy the value of paper money by printing unlimited amounts.

The best time to buy an asset is when it is unloved and undervalued. Currently this asset is as an all time low, compared to the amount of credit creation. And since over time this asset will always react to increases in money supply and debasement of currencies, it is likely in the next few years to correct the current major current undervaluation.

MONEY PRINTING BONANZA WILL PROPEL THE ASSET
But there is more to it. Because governments have in the last few months started the biggest money printing bonanza in history. The continued Repos by the Fed and monthly QE of $60 billion plus, EUR20 billion QE by the ECB is just the beginning. The BOJ in Japan is printing $700 billion annually and the PBOC in China is injecting $100s of billions to alleviate the effects of the Coronavirus.

What is absolutely guaranteed is that we have only seen the beginnings of a massive global QE programme. As economies around the world slow down, deficits increase and the financial system comes under more pressure, the floodgates will open up totally.

So we are soon starting the acceleration phase of currency debasement which will further propel the “secret” investment I discuss above.

LESS THAN 0.5% OF INVESTORS KNOW THAT THE ASSET IS GOLD
For readers of my articles who belong to the less than 0.5% of investors who buy this asset, it is obviously not a secret that I am talking about gold. But the other 99.5% have not yet discovered gold or other precious metals like silver and platinum which are also massively undervalued.

Both technically and fundamentally, the metals are now poised for sustained uptrends that could see price rises of 10x or more. A major part of the rise will be price gains in real terms but as inflation catches hold, eventually leading to hyperinflation, we could see much higher prices in nominal terms.

The primary reason for buying gold is not to make money but to preserve wealth. As the biggest asset destruction period in history takes hold, most of the artificial wealth that has been created in the last 100 years and especially in the last 50 years, will implode. Since the world is totally unprepared for this, it will not only lead to panic in markets but also breakdowns in social structures.

Technically, virtually all governments will default but they won’t admit it of course. Instead, they will continue to print worthless money, combined with debt moratoria. Many will introduce a new currency like crypto dollars or crypto euros to defuse the situation. But since all they will do is to create another form of fake money, markets will only fall for this trick momentarily.

GOLD IS IN A 20 YEAR BULL MARKET
How 99.5% of all investors can have avoided a 20 year bull market in gold is mind-boggling. The two charts below tell the story…

Today gold in euros is at new highs above the 2011-2 highs. Gold has made new highs in all currencies except the US dollar and Swiss franc. In dollars, gold went up for 10 straight years from $254 in 2001 to a high of $1,920 in 2011. Gold then corrected for three years but has now been in an uptrend for five years. The $1,920 high is not an important level. Since gold has made new highs in virtually every currency, the $1,920 level will not represent any significant resistance. I would be surprised if gold doesn’t break the $2,000 level in 2020 as the dollar declines. 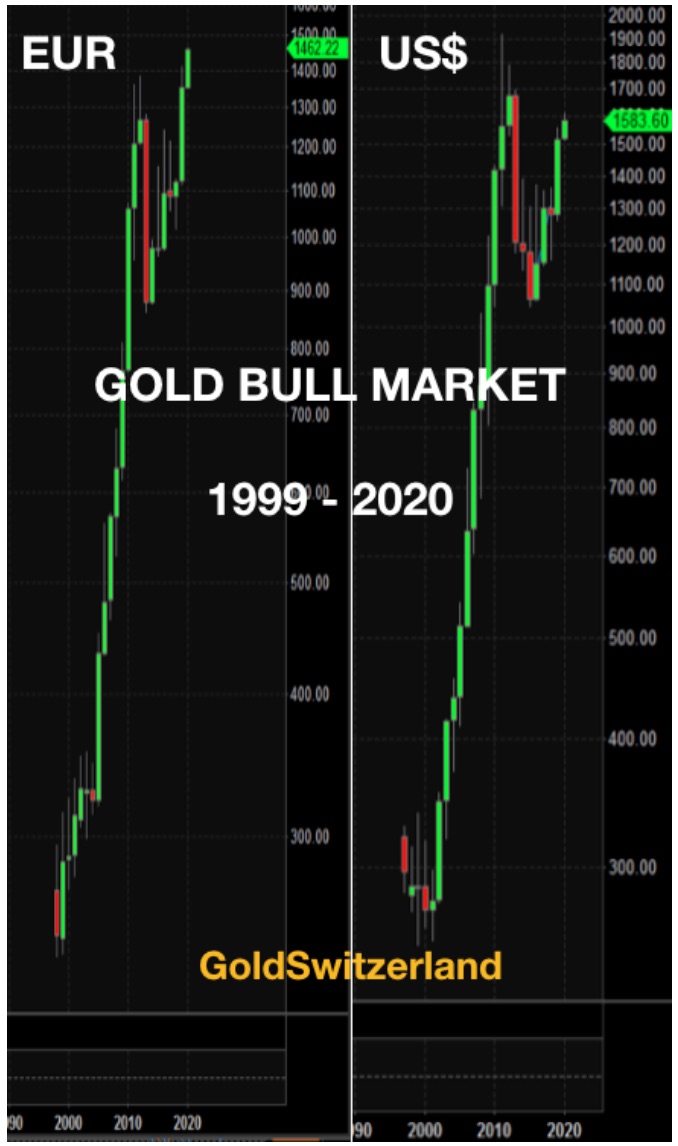 STOCKS AT THE END OF A MULTI CENTURY BULL MARKET
Stocks are finishing a move of historical importance. It could be the end of a Grand Supercycle from the 1700s. If that is the case, the fall in coming years will be greater and longer than the 90% crash in the Dow 1929-32. Most markets worldwide are in a similar position. As always at the end of major moves, we could see a final euphoric rise which would take the Dow to 30,000 and the Nasdaq to 10,000. But risk is now at an absolute maximum, so to try to grab the last few pennies out of a 3 century bull market would be extremely foolhardy.

As regards the bond markets and interest rates, the general consensus it that the US will have to reduce their rates significantly to stimulate a faltering economy and stock market. In my view it could be extremely dangerous to bet on lower rates and higher bond prices.

The contrarian position has a very good chance of being the wining one.

INTEREST RATES ARE BOTTOMING
The 35 year interest cycle peaked in 1981 and bottomed in 2016 as the chart of the US 10 year Treasury Note below shows. The current yield of 1.59% is not far from the low but the recent fall in rates has not been confirmed by momentum indicators. Thus the chart indicates a bullish divergence and therefore the potential of rates going up from here. Our proprietary cycle indicators confirm that move. 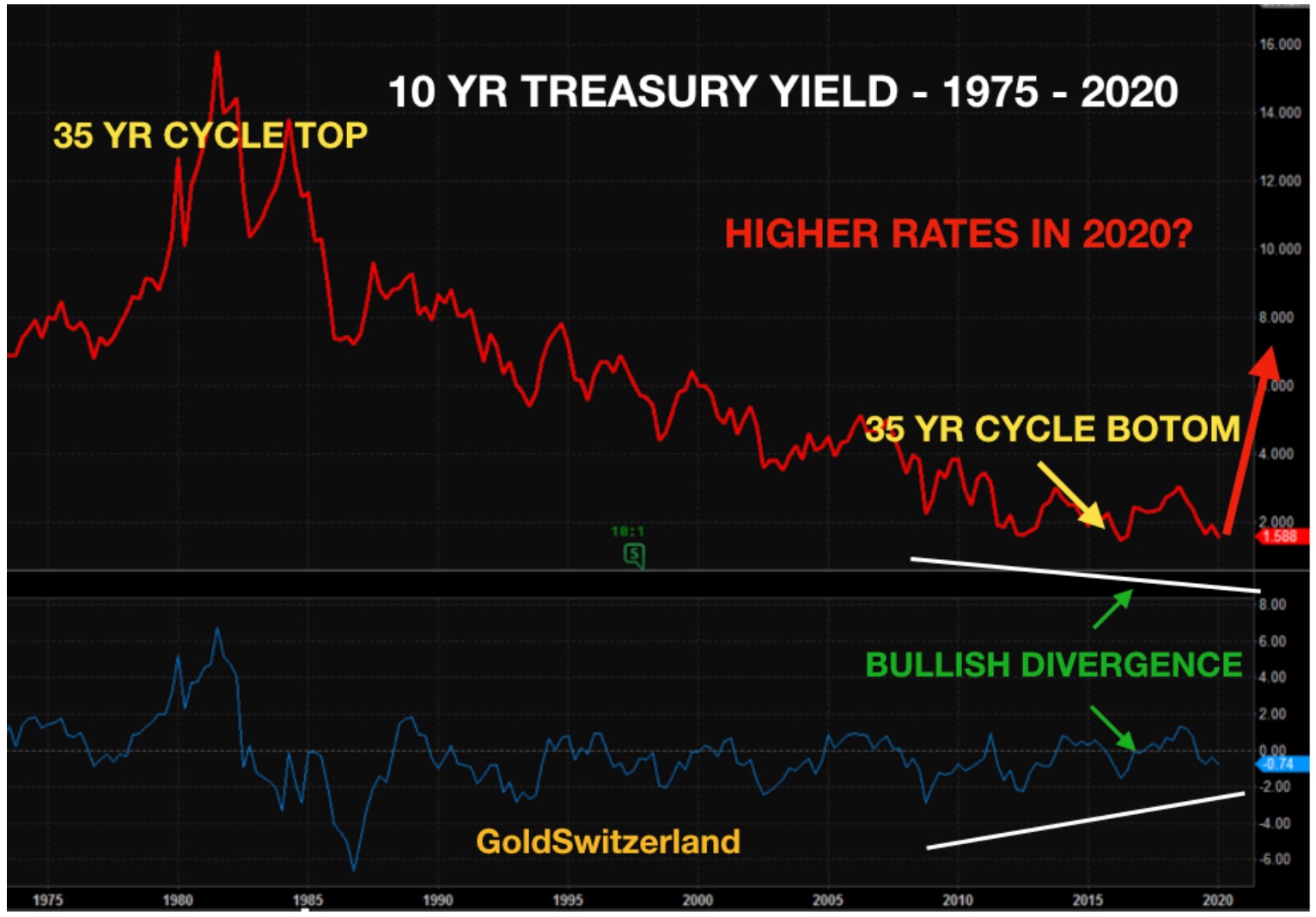 But whether rates go up from here or slightly later is of less importance. What is certain is that central banks will lose control of interest rates as bond markets collapse and yields surge when money printing takes off in earnest. The current belief in flight to “safety” by holding government bonds is absolutely ludicrous. At some point in the next year or so, investors will exit bonds at any price. Nobody will want to hold a toxic instrument issued by a bankrupt government who can neither afford to pay the interest or the capital without issuing more worthless bonds.

INVESTORS HAVE A BINARY CHOICE
So there we have it. Investors have a binary choice. Either they stay in the conventional and “safe” bubble assets of stocks, bonds and property and lose it all. And when I say all, I mean at least 90-95% in real terms which is against gold.

Or alternatively investors can save themselves from disaster by owning physical gold and some silver.

Sadly, the majority will take the wrong current and “lose their ventures.” (from Shakespeare’s Julius Caesar). For those who would like to read more of Egon von Greyerz’s fantastic articles CLICK HERE.