As the world edges closer to the next crisis, today the man who has become legendary for his predictions on QE and historic moves in currencies and metals told King World News that the world economy is collapsing and QE-to-infinity will be launched.

Trouble Ahead
February 23 (King World News) – Egon von Greyerz:  As the world is approaching the end of another failed monetary experiment, very few people are aware what lies ahead of them and therefore nobody is mentally or financially prepared for the massive shock that will hit the world.

Gold is now signalling to the few who follow the price that there is trouble ahead. But since less than 0.5% of investors own gold, virtually no one understands this important signal. I have told our investors who are in precious metals that they shouldn’t wish for the gold price to go up because when it does, we will enter a phase in history which will be extremely unpleasant. And this is exactly what will happen next.

PONZI SCHEMES EVENTUALLY RUN OUT OF MONEY
Central banks have totally destroyed the global financial system by believing that they can control the world by continuously printing money and extending credit. Like all Ponzi schemes, the present one only works by doing more and more of the same. But Charles Ponzi and Bernie Madoff could at least rob new investors of their money to pay the old ones. But a Ponzi scheme has one great disadvantage compared to a central bank. Eventually the Ponzi scheme runs out of new investors and the whole scheme collapses with everybody losing everything.

CENTRAL BANKS HAVE PRINTED $4 TO ACHIEVE $1 INCREASE IN GDP
Central banks have a major advantage because they don’t need new investors to pay the old ones. Instead they have a printing press or its modern electronic version so that they can just print money at will whenever there is a need. Just since the last crisis started central banks have caused a doubling of the amount of debt outstanding in the world from $125 trillion in 2006 to $260 trillion today…

So $135 trillion has been created out of thin air and no one needed to do any work or produce any goods. The money just dropped down from above or spurted out of computers. Just look at that manufactured and fake money in relation to global GDP. In 2006, global GDP was $51 trillion, and debt $125 trillion, which was 245% of GDP.  Today GDP is $87 trillion and debt $260 trillion. That means the world has achieved an increase in GDP since 2006 of $36 trillion but had to print $135 trillion to achieve this, which is almost 4x the increase in GDP.  So for every dollar of GDP increase $4 had to be printed.

WORLD ECONOMY RUNNING ON EMPTY
This is what is called running on empty. To fill the tank or economy with worthless pieces of paper can never create a sound financial system or real wealth.

So how are the central banks going to get out of this? The problem is that they are not. But they believe they can just continue the same game of expanding credit and keeping interest rates low. Sadly, they will fail miserably. If they studied history, they would know. But instead they show a remarkable arrogance in believing that it is different today. Since they are falling back on a relatively short period in history since the creation of the Fed in 1913 they can of course argue that they have been right for over 100 years.

WAS NIXON A GENIUS?
The genius move was of course made by Nixon to take away the gold backing of the dollar in 1971, and thus of all major currencies. This gave governments and central banks the freedom to flood markets with money which creates massive wealth for a few and unsupportable debt for the masses. So for almost 50 years asset markets have been fuelled by chronic credit expansion, creating enormous paper wealth.

Over time gold doesn’t go up in price but just maintains stable purchasing power. But gold obviously doesn’t move in a straight line and there are major fluctuations above and below the mean. In the period August 1971 to today gold has gone from $35 to $1,643. That is an annualised return of 10.66%. So in the last 49 years gold has doubled in values every 6 3/4 years, which is almost equal to the Dow which had doubled every 6.5 years.

PHYSICAL GOLD IS NO ONE ELSE’S LIABILITY
If you have physical gold and don’t lend or lease it out, there is obviously no dividend. This is of course the whole purpose of gold, especially when the financial system is virtually bankrupt. You own it directly in physical form and store it outside the financial system. This means that gold is no one else’s liability which is the only way to hold real wealth. Any asset within the financial system is someone else’s liability and all an investor holds is a paper claim with multiple counterparty risk. True wealth preservation must always be held in physical form, free and clear from any claims.

QE TO INFINITY NEXT
After having paused for a brief period, the Fed and the ECB as well as other central banks resumed QE in the autumn of 2019. I referred to these actions in a previous article as a seminal moment similar to Nixon closing the gold window in 1971.

Central banks could only stop money printing for a few months without the whole system imploding. The severe problems in the banking system necessitates a constant injection of fresh money. Banks shed almost 80,000 jobs globally in 2019 and since 2014, they have fired over 400,000 staff. Banks like Deutsche and Commerzbank are fighting for survival. But the problem is much greater, and if we take HSBC only, they will cut 35,000 jobs and shed assets of $100 billion. In addition they are taking a massive $7.3 billion hit to assets by writing off goodwill. The Fed’s aggressive actions in Repos and QE is a clear indication that also many of  US banks like JP Morgan and Bank of America are under real pressure.

What is clear is that we are now in the final phase of desperate actions by central banks to save the system. They have had a 10 year reprieve since the 2006-9 crisis. That has cost many hundreds of trillions of debt and derivatives to prop up a bankrupt system. But the stay of execution has only been temporary and the central banks are now embarking on the biggest money printing exercise in history to fight for their survival as well as the survival of the financial system.

But this time their eleventh-hour actions will fail. The size of the debt bubbles will guarantee that. It is incomprehensible that both Nobel Prize winners and central bank heads believe a debt problem can be solved by more debt. Yes, of course they will fudge it by creating new currencies like crypto-dollars or crypto-euros and with some hocus pocus make the debt disappear. The market will soon realise that and when the debt disappears, all the assets that the debt  supported will implode in value.

But before that the world will see a period of first inflation and then hyperinflation as the central banks flood the system with $100s of trillions and later probably also quadrillions of dollars of worthless money.

It is quite remarkable how Jefferson predicted all this already 200 years ago: 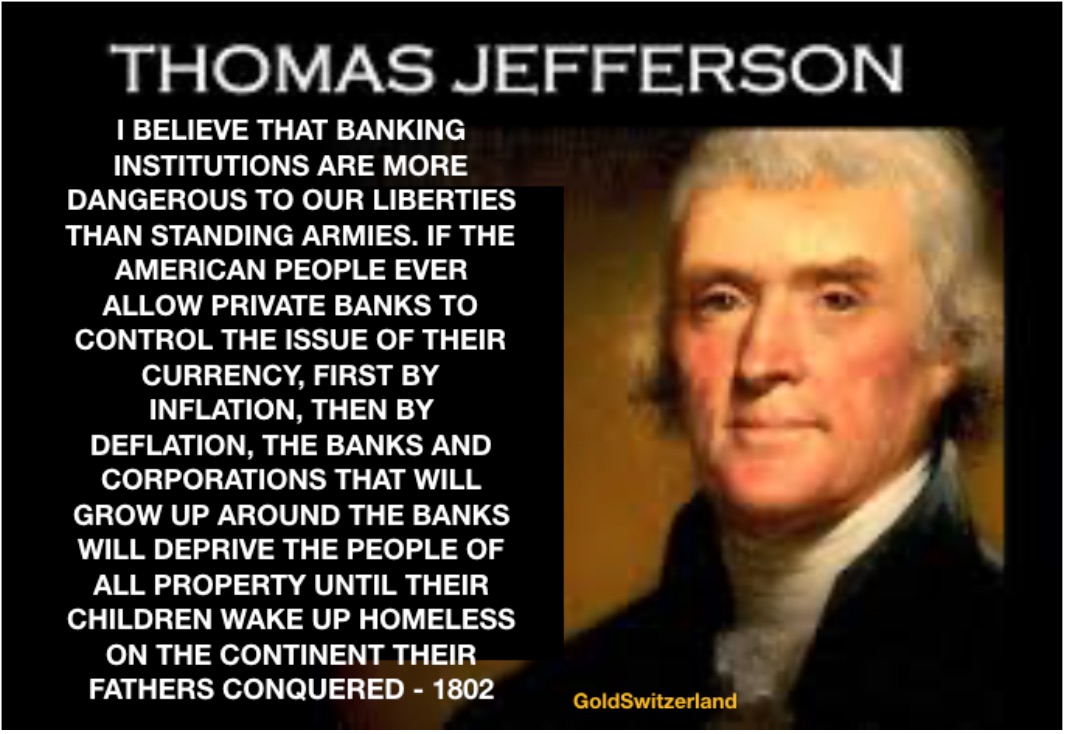 Instead of saving the system, the central banks will be hoist by their own petard. Because the more money they print, the more bankrupt the world will become and the less money will be worth.

As history shows, all paper or fiat money has without fail always gone to ZERO. I have quoted Voltaire for over 20 years, but it is still worth repeating this inevitable fact: 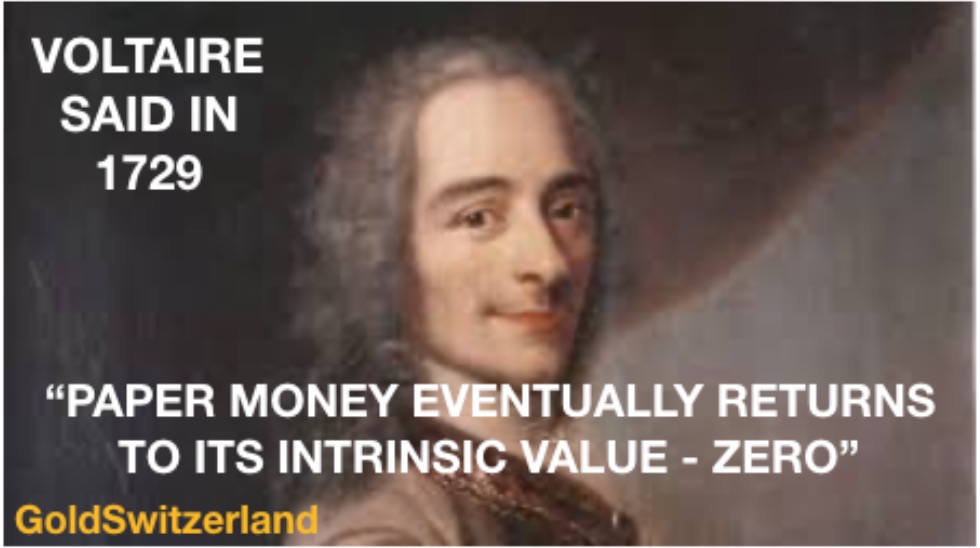 Basically there are three kinds of money: 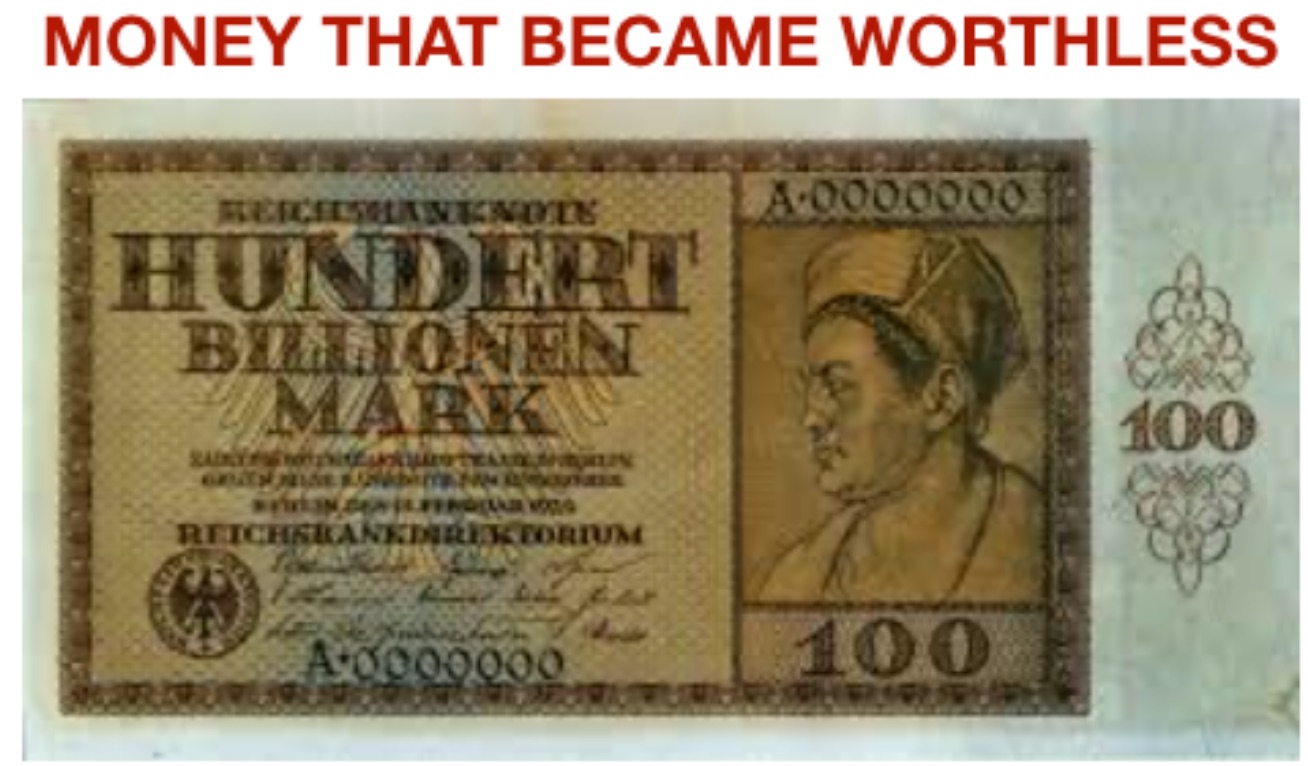 It wasn’t that long ago that Germany experienced hyperinflation which was in the early 1920s in the Weimar Republic.  Above is a 100 trillion mark note. (Billion in German is Trillion)

Both the Euro and the Dollar are likely to reach Zero in the the next 5 years.

As paper money is destroyed in coming years, gold will continue to preserve real purchasing power, as it has for the last 5,000 years. (Picture above shows 1/2 tonne of gold bars worth $26M). And this is why anyone who wants to preserve their wealth should hold physical gold as insurance. With the likely catastrophic collapse of major parts of the financial system, gold is likely not just to preserve wealth but also to enhance it substantially.

WEALTH DESTRUCTION OF EPIC PROPORTIONS
The alternative of holding on to all the bubble assets like stocks, bonds and property, is likely to lead to a loss of at least 90% when measured against gold. That would be a wealth destruction of epic proportions which would decimate most fortunes permanently.

Since we have had such a long period of markets only going up, even after major corrections, no conventional investor will ever believe that their wealth can be destroyed by over 90% in coming years. Therefore no one will position himself for such a scenario. This means that the coming implosion of markets will come as a total shock to most investors, a shock that they will never recover from.

I have been standing on a soap-box for almost 20 years endeavouring to explain the virtues of gold for wealth preservation purposes. Only a very small group has understood. The great majority will sadly learn their lesson the hard way…For those who would like to read more of Egon von Greyerz’s fantastic articles CLICK HERE.