On the heels of continues wild trading across the globe, a major breakout in the gold and silver markets is now underway. Here is a stunning look at what is driving prices higher.

Gold Breakout
February 19 (King World News) – Graddhy out of Sweden:  “We got the expected breakout yesterday. It chose a middle route between my purple and pink assumed alternative routes to breakout. This also confirms my DCL (Daily Cycle Low) at day 15. Now it is game on again after this 1.5 months flag consolidation, as expected. (See below).

Major Breakout In The Gold Market 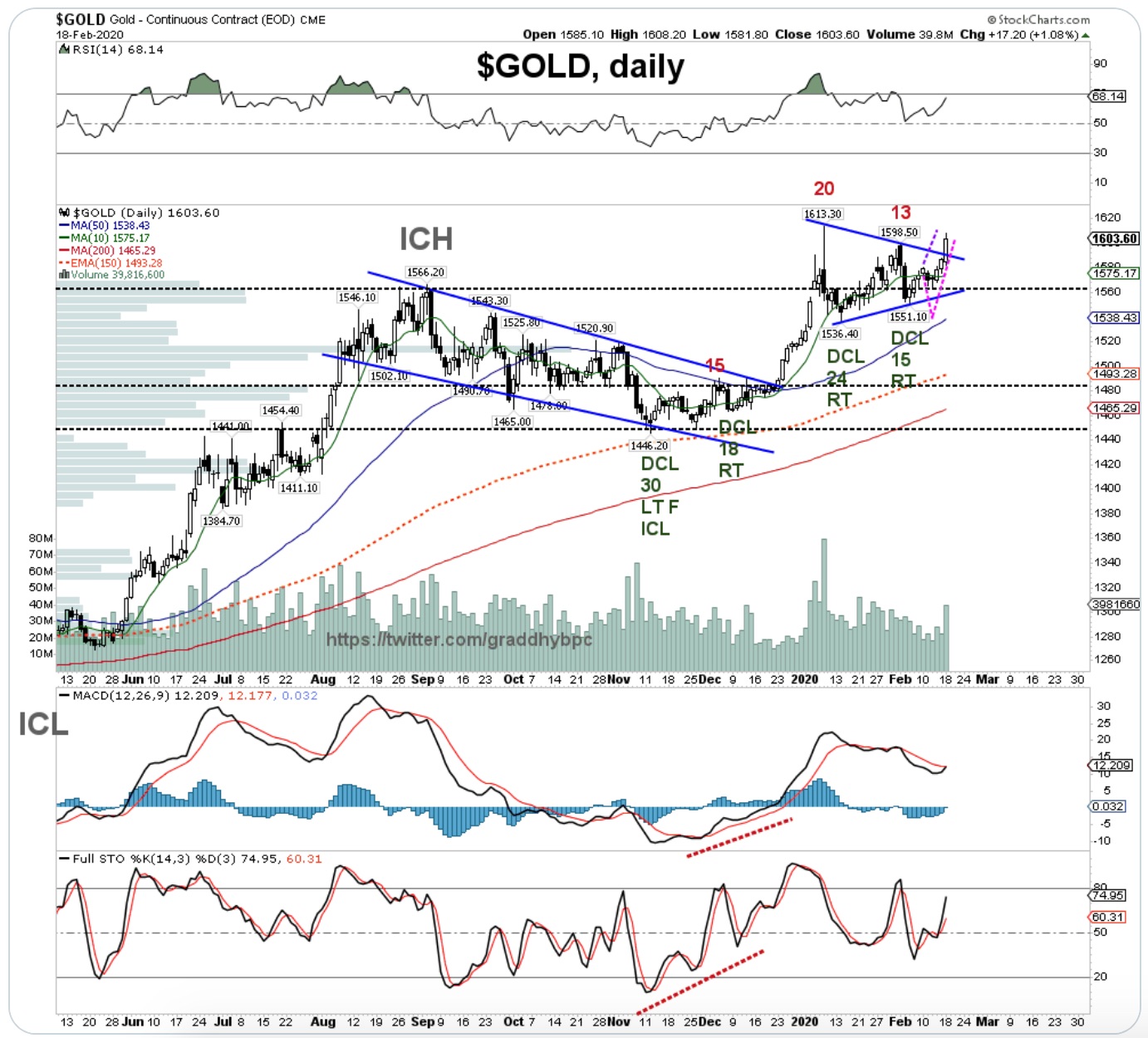 Silver Breakout
Graddhy out of Sweden:  “We got the breakout yesterday, out of the 5.5 months consolidation. This confirms both my DCL (Daily Cycle Low) at day 34, my long called for green rounded bottom, and my red dotted FBO (Fake Break Out) plus end around the apex move call. (See below). 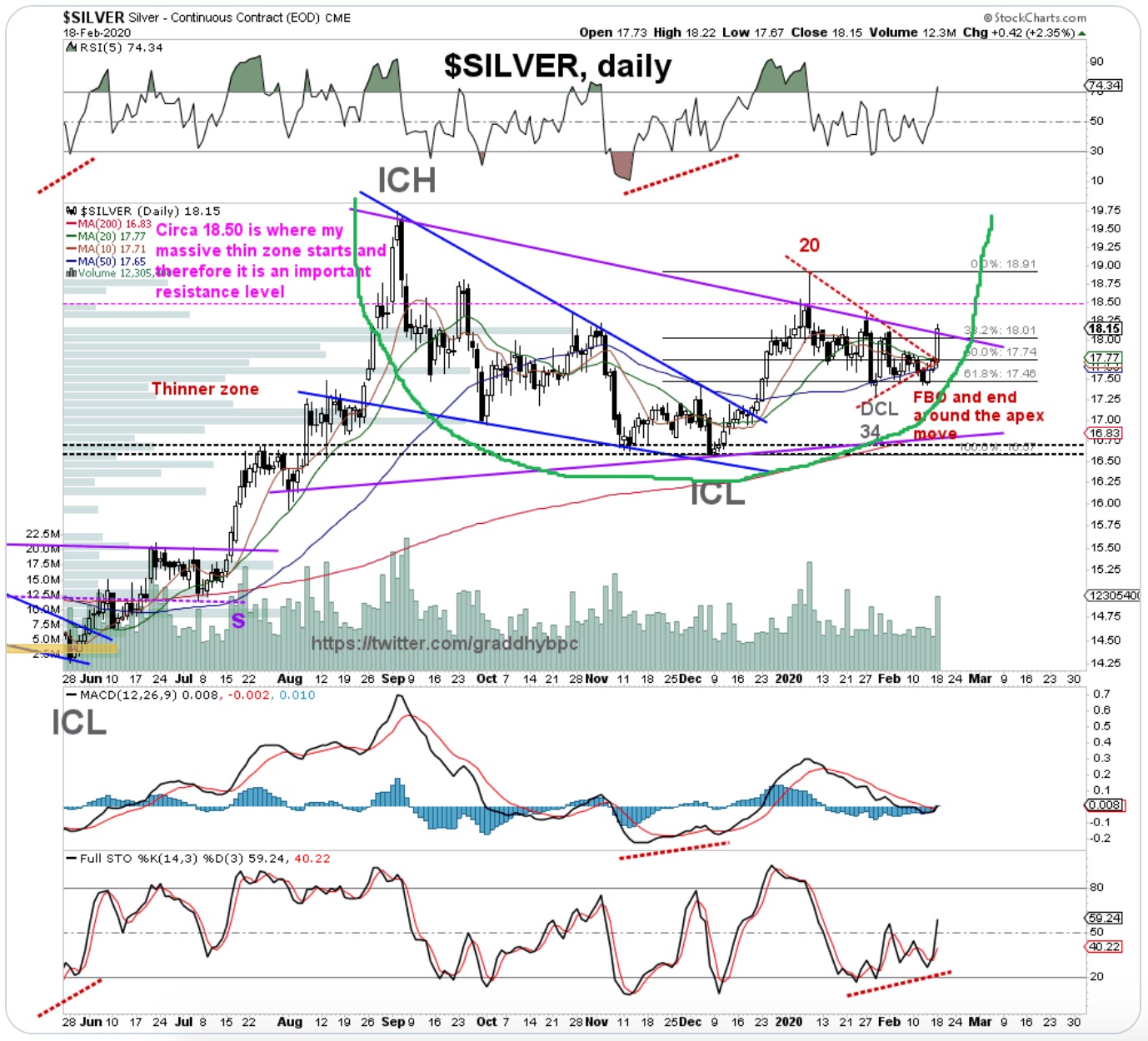 Gold Bullish, Plus Silver Most Attractive Asset
Peter Boockvar:  “Meanwhile, gold continues its move higher in the face of a stronger dollar and that is because real rates continue to decline and I remain very bullish on gold. I also love silver and think silver is the most attractive asset right now on the belief that it will play catch up to this move higher in gold and the ratio between the two will narrow. (See below). 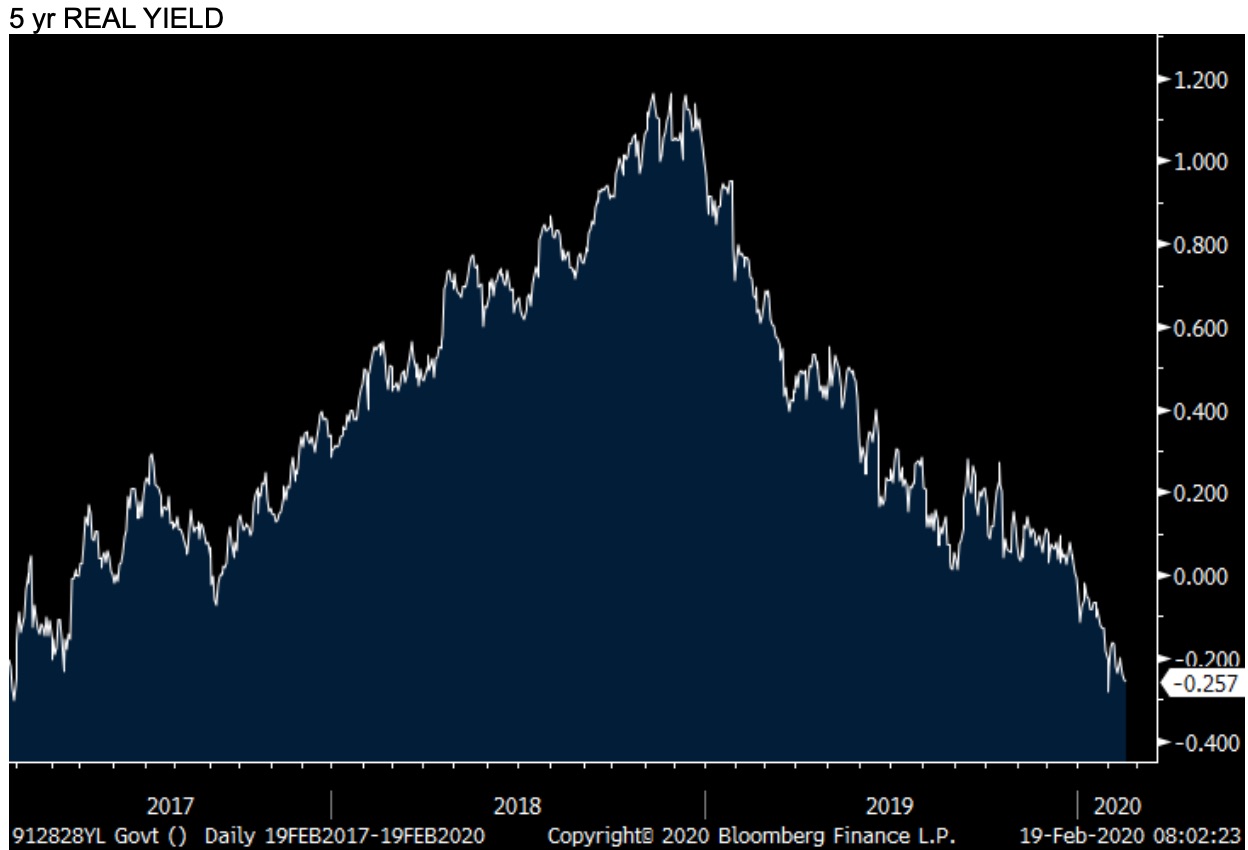 Silver Is The Most Attractive Asset Now 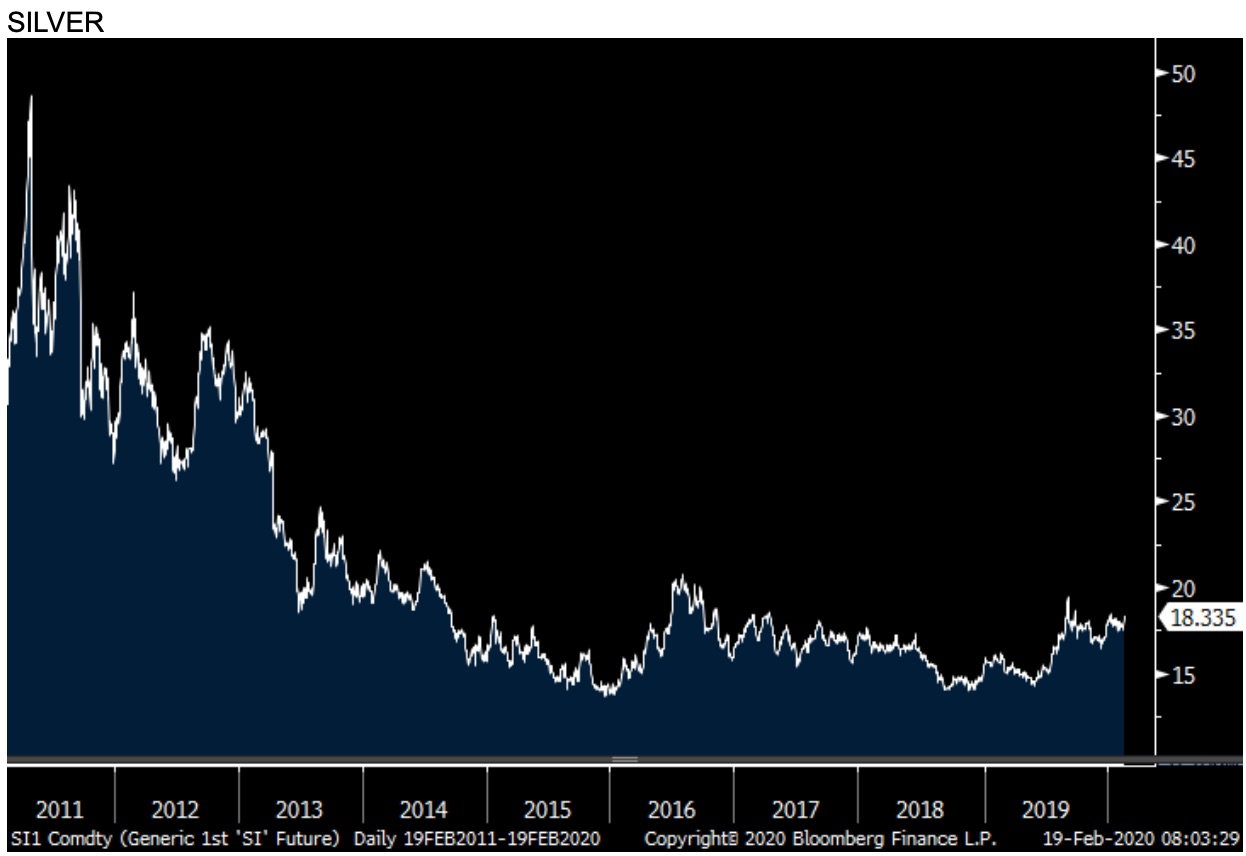 Gold & Silver Rallies Extend Further
Ole Hansen, Head of Commodity Strategy at Saxo Bank:  “Gold continues its impressive rally and yesterday it broke back above $1600/oz to reach the highest close since 2013. The recent move has been particular impressive occurring at time when the dollar has been breaking higher against several major currencies. The dollar strength has been particular noticeable against the euro which has dropped to a near 3-year low and in the process gold priced in euros has rallied to a fresh record high at €1490/oz.

The rally has also occurred despite reduced COVID19 fears with the market right or wrongly increasingly adopting a belief that it will primarily be a Q1 event. This on the assumption central banks and governments will do whatever it takes to support a return to trend growth later this year…

So why is gold in demand when other markets are doing better and the dollar is rising? We believe that the combination of additional rate cuts, increased stimulus, negative US real yields and U.S. stocks back to record levels will continue to drive strategic diversification and safe haven demand. Adding to this the potential risk that the virus outbreak may have a longer than expected impact. 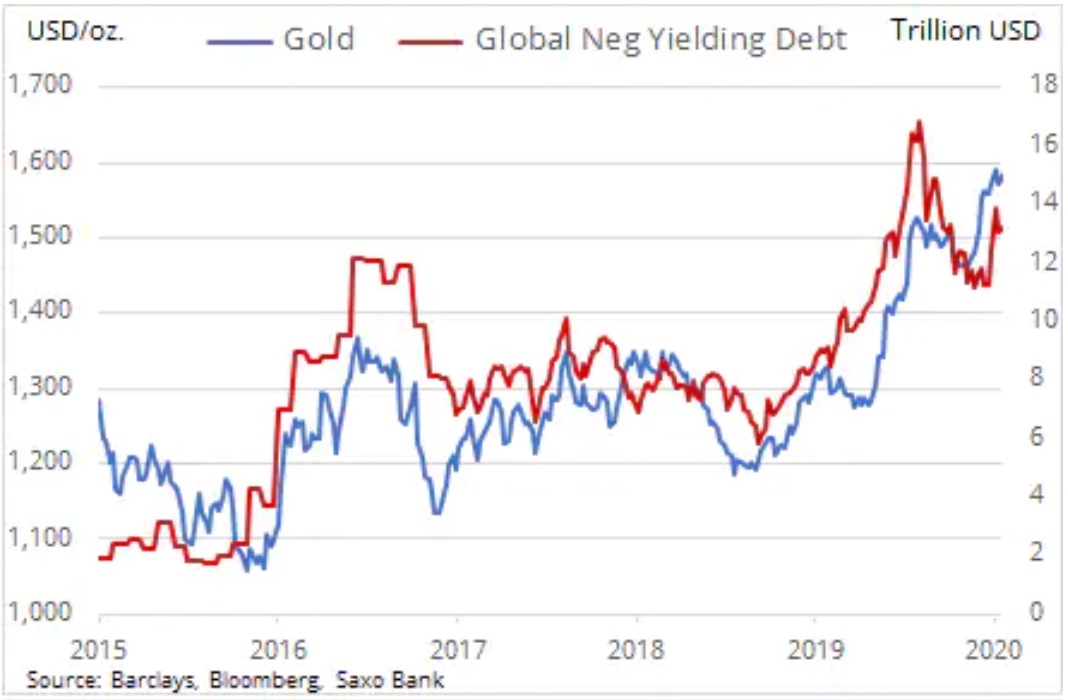 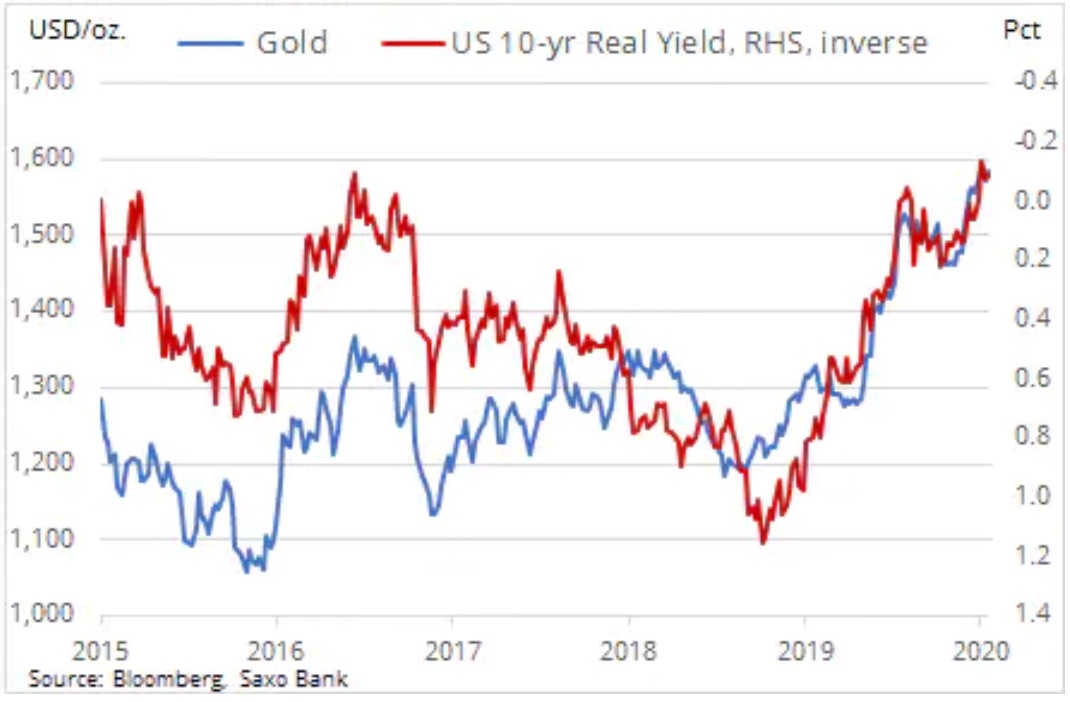 Further Interest Rate Cuts
Will Be Bullish For Gold 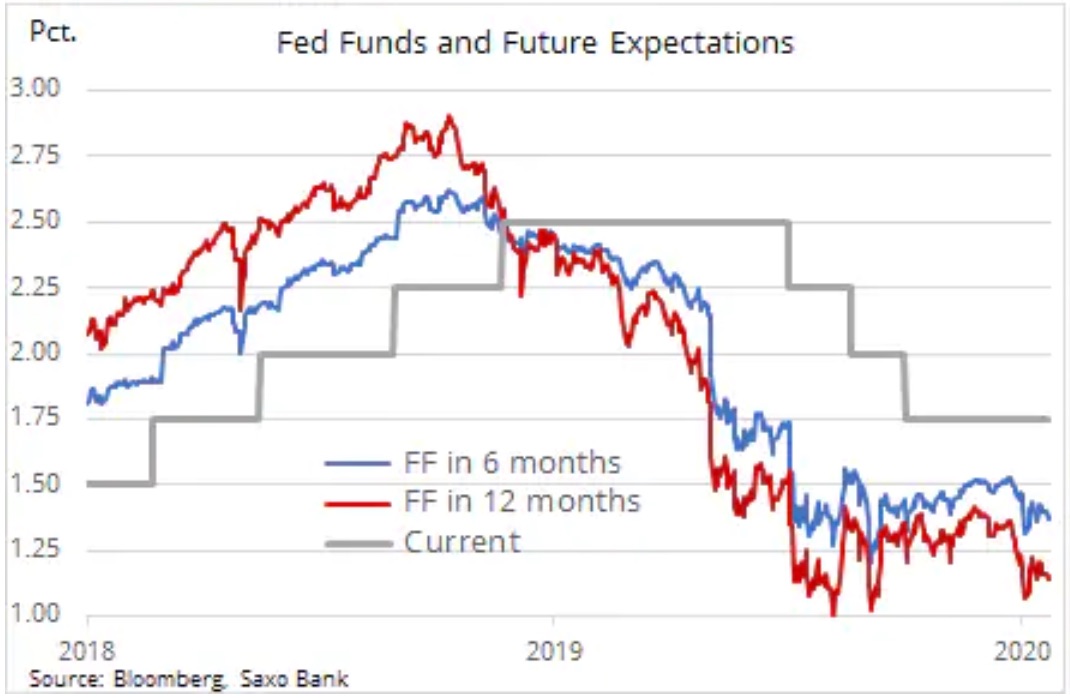 January was a particular worrying months for the markets with U.S.-Iran tensions being followed by the virus outbreak. During January total holdings in Exchange-traded funds backed by bullion rose by an average of 1.3 tons/day. So far this February holdings have, despite the mentioned dollar strength and recovering markets, been rising by 1.9 tons/day. 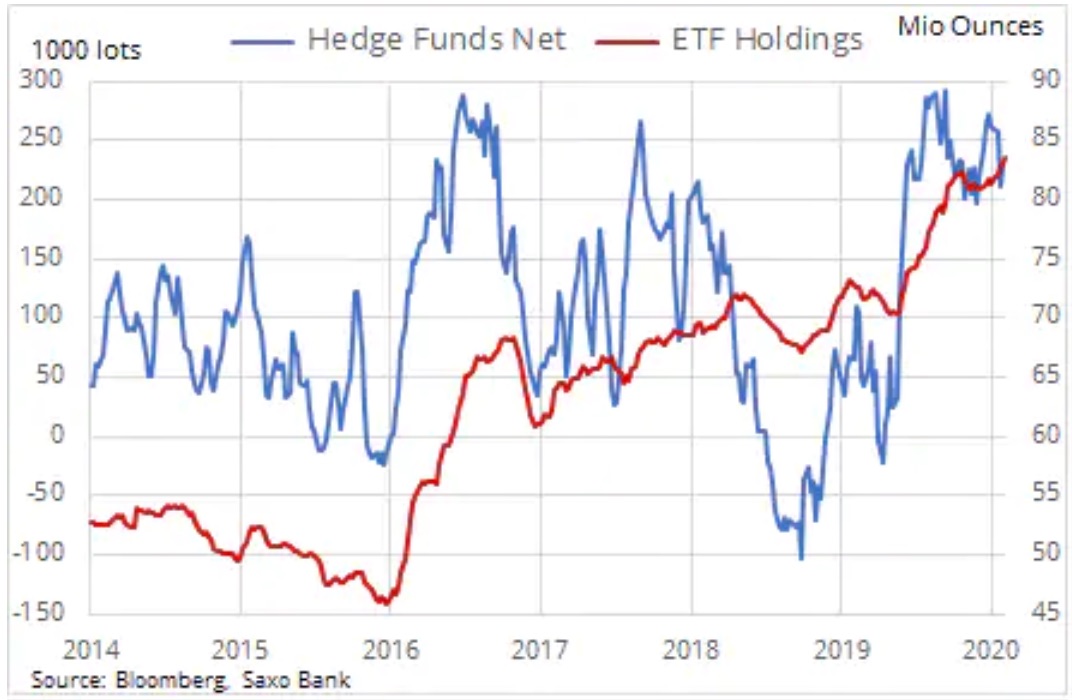 Gold has extended its rally today and reached the January top at $1611/oz. With the metal moving higher, despite the mentioned headwinds from other markets, it is difficult to see what at this stage can halt or pause the rally. 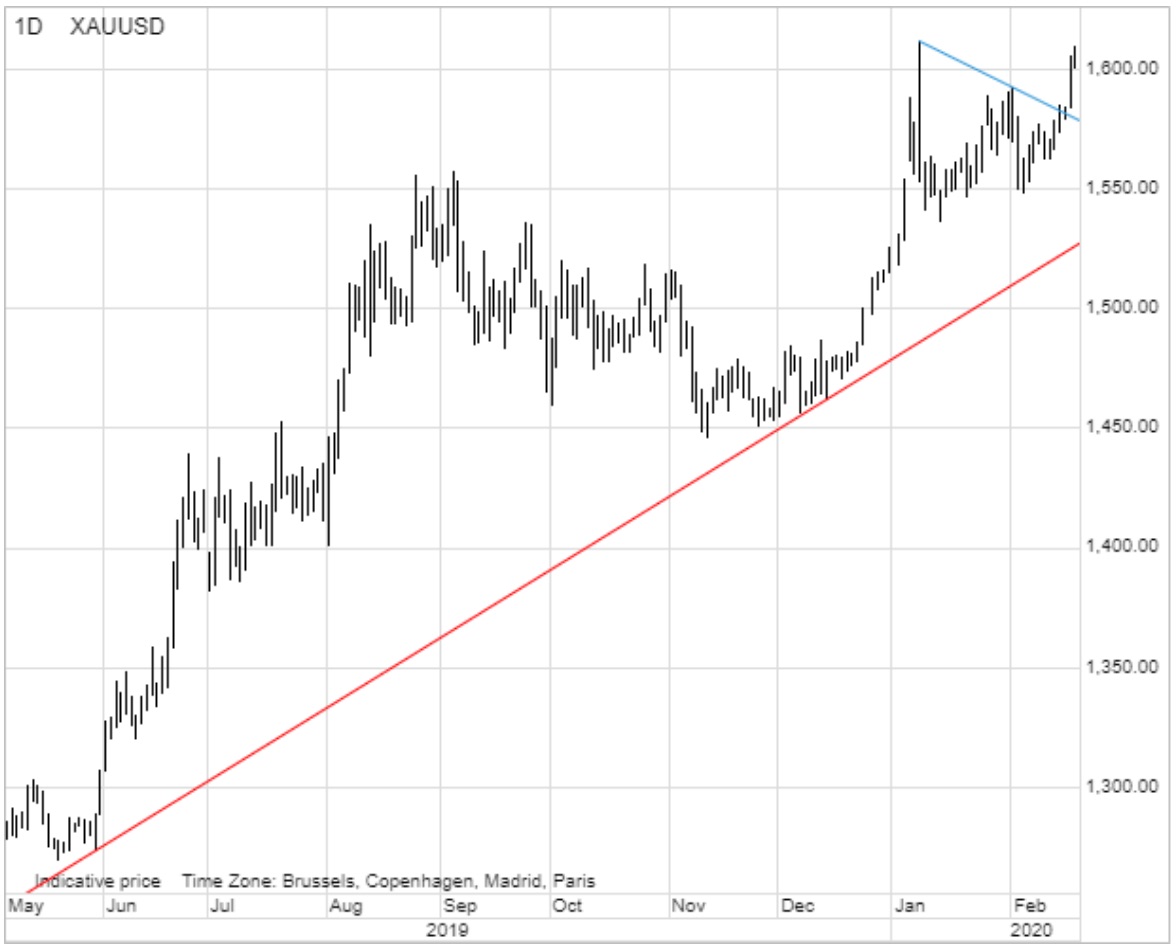 Silver
Silver which suffered a deeper correction than gold last year has benefited from the ongoing focus on precious metals. Over half of silver demand comes from industrial applications and this is the main reason why it has struggled amid worries about the virus impact on global growth.

However with a lighter position than gold the continued rally has once again helped attract interest from traders looking for relative value. After finding support at $17.50/oz it has spent the past five days outperforming gold with the gold-silver ratio dropping back towards 87 (ounces of silver to one ounce of gold). 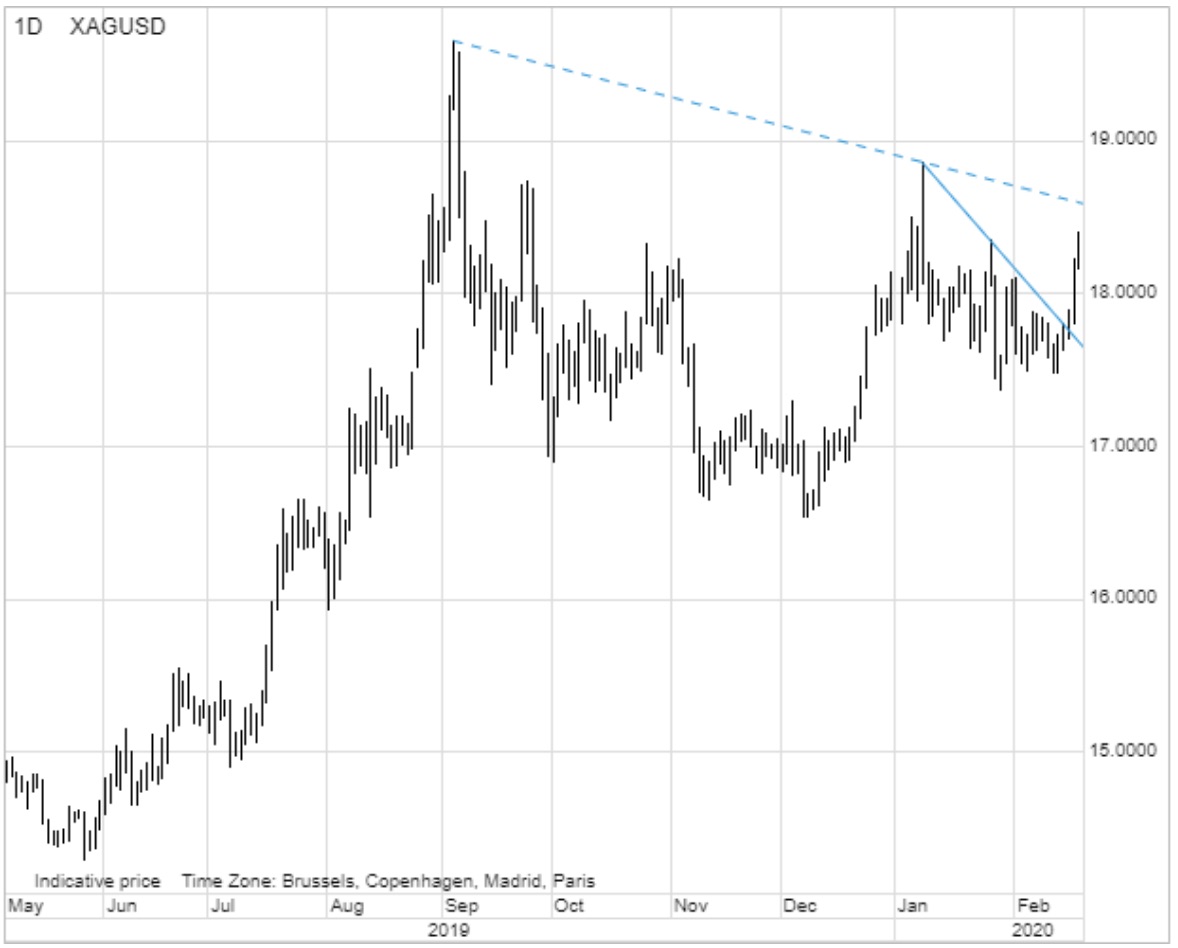 Silver may find some resistance ahead of $18.60/oz (dotted line) while gold, for lack of clear technical levels, could be heading towards the next round number at $1650/oz. However having reached resistance at $1611/oz it may pause first in order to gauge the level of support at these higher levels. A small correction could see it test the recent high at $1590/oz.

ETF Holdings Expand
While total ETF holdings continue to reach new record highs hedge funds have maintained a net-long between 200,000 and 300,000 lots since last October. The latest breakout is likely to attract fresh momentum buying which will be added to the 229,369 lots (22.9 million ounces) they held during the latest reporting week to February 11. The speculative long in silver is significantly lower than gold and at 56,011 lots there is still some room to go before reaching the 2017 record at 99,000 lots.

Room For Gold Longs To Add To Positions 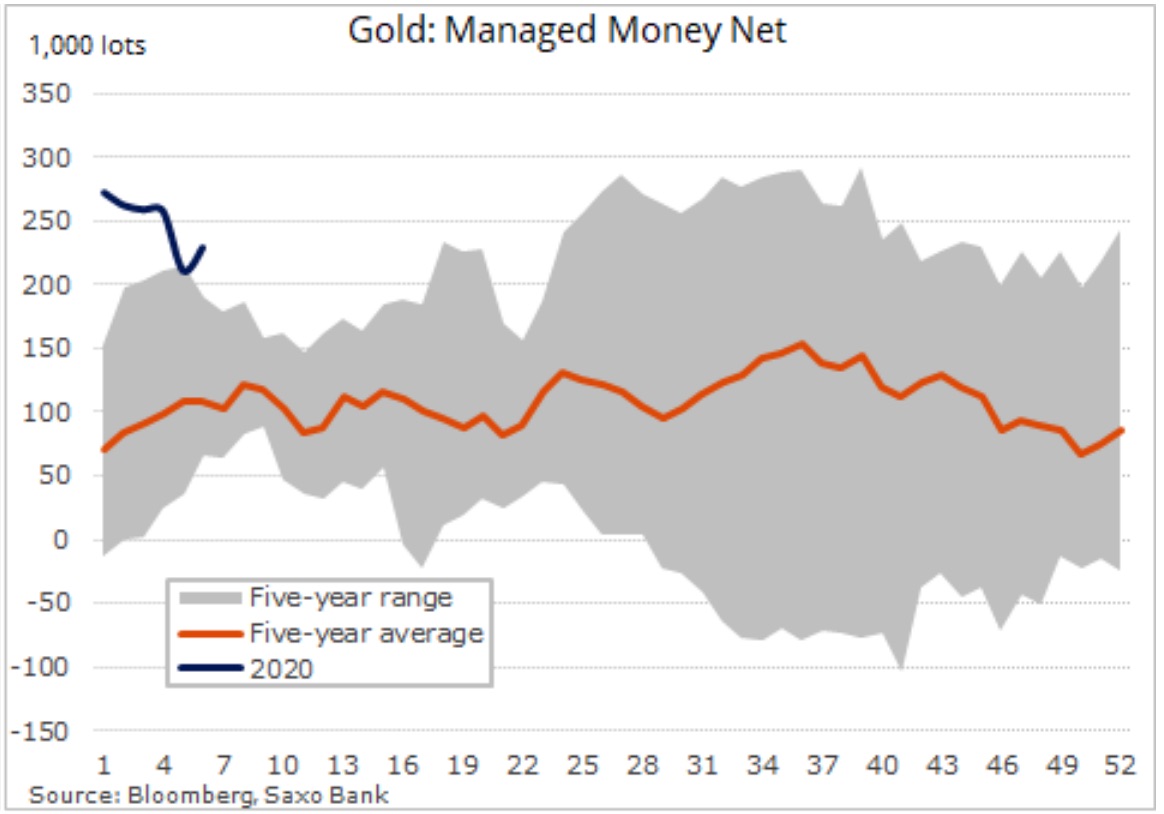 Room For Silver Longs To Add To Positions 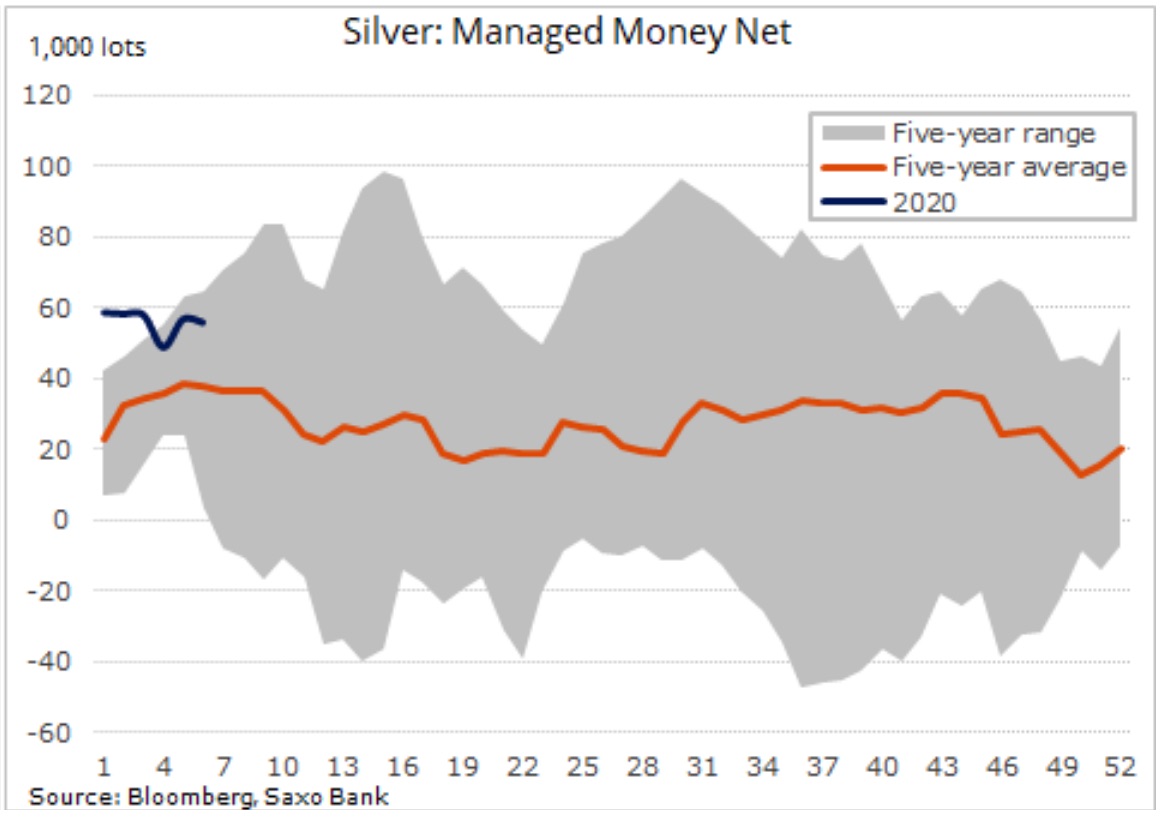 Summary:
Gold continues its impressive rally and yesterday it broke back above $1600/oz to reach the highest close since 2013. The recent move has been particular impressive occurring at time when the dollar has been breaking higher against several major currencies. In this update we take a look at why gold remains in demand despite the apparent headwinds.

Gold & Silver Pull Back After Massive Surge, But Here Is The Good News