The price of gold is continuing to surge, trading well above $1,900 as massive Chinese buying spurs rally.

Gold challenges $1900
January 13 (King World News) – Alasdair Macleod:  Gold and silver were in bullish mode this week, with gold rising strongly and silver consolidating earlier gains. This morning in European trade, gold was at $1905, up $40 from last Friday’s close. On the same time frame silver was unchanged to trade at $23.78. Comex volumes were healthy in both metals. 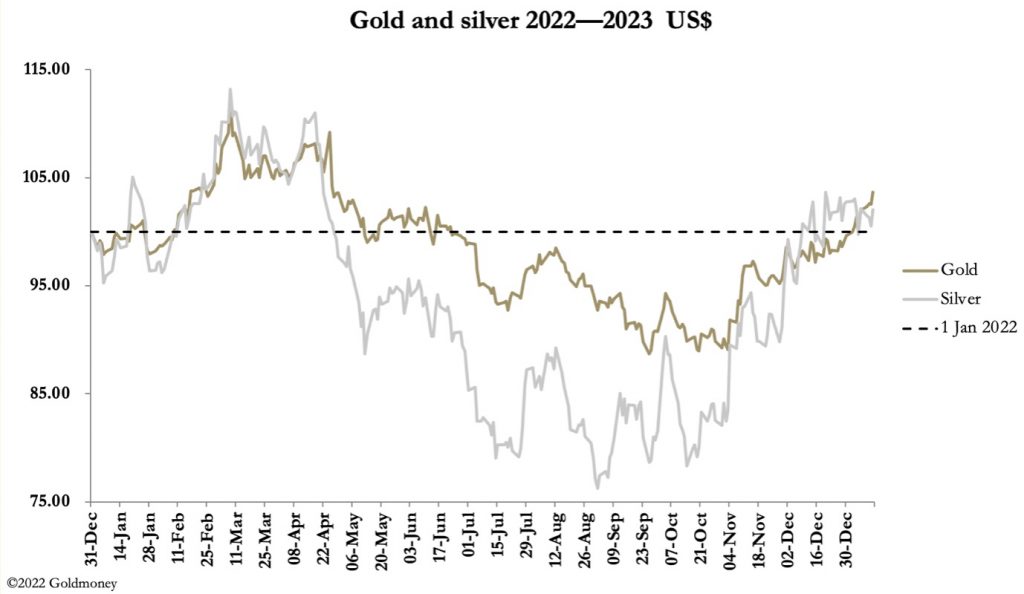 Since early November, gold has rallied $280, encouraging technical analysts to call for a correction. But there are two things that confound them: while Open Interest on Comex has risen sharply, at 488,147 contracts it is still in marginally oversold territory, suggesting gold could easily run further. The OI position is up next. 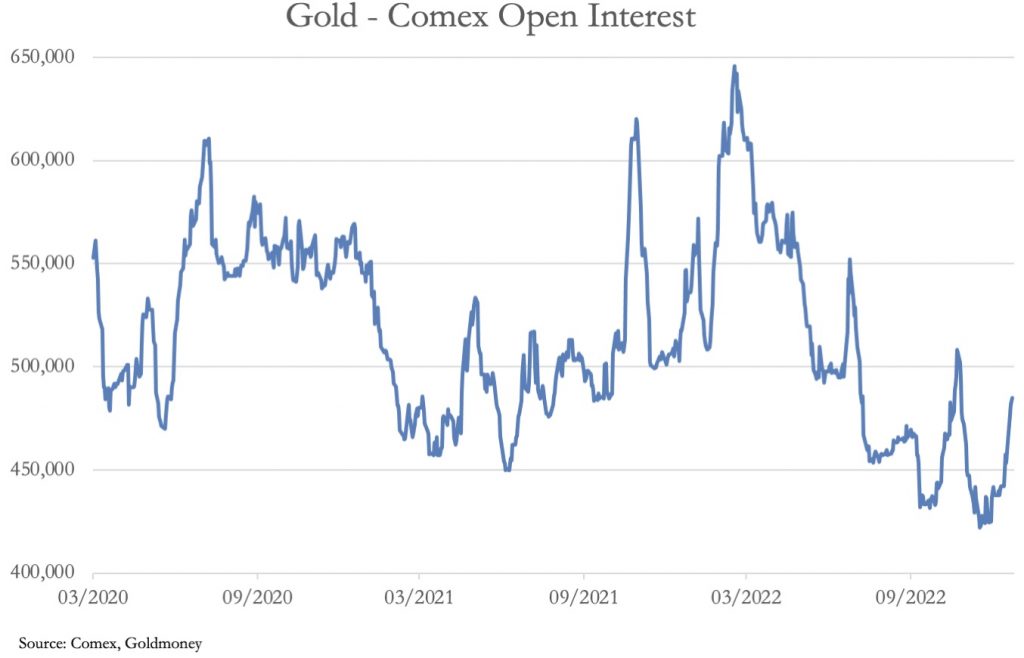 On this measure, before gold is truly overbought we can expect to see Open Interest rise by at least another 100,000 contracts towards the 600,000 level. Meanwhile, there is very good momentum under the price, as my tweet of last Wednesday pointed out. 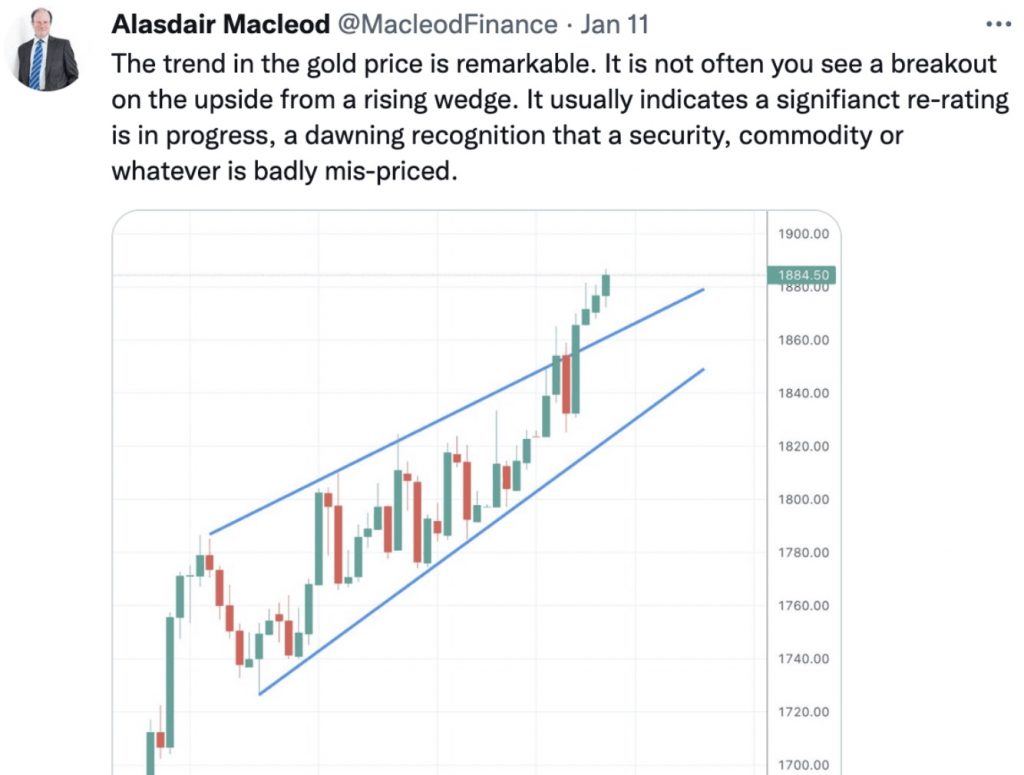 The other side of the gold trade is the dollar’s trade weighted index. This is up next. 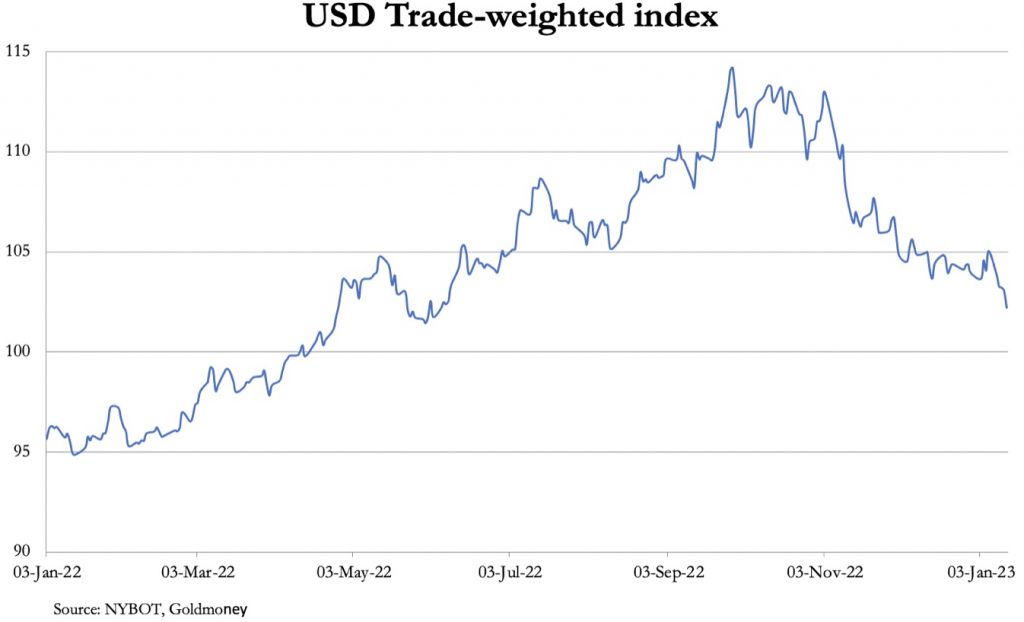 The TWI has been in freefall, again encouraging technical analysts to call for a countertrend rally. But the problem here is that bond markets are adopting the view that the ECB and Bank of Japan are still raising rates, while an end is in sight for increases in the Fed funds rate. This is particularly the case for Japan, where the BoJ’s upper yield limit of 0.5% for the 10-year JGB has been challenged and broken. 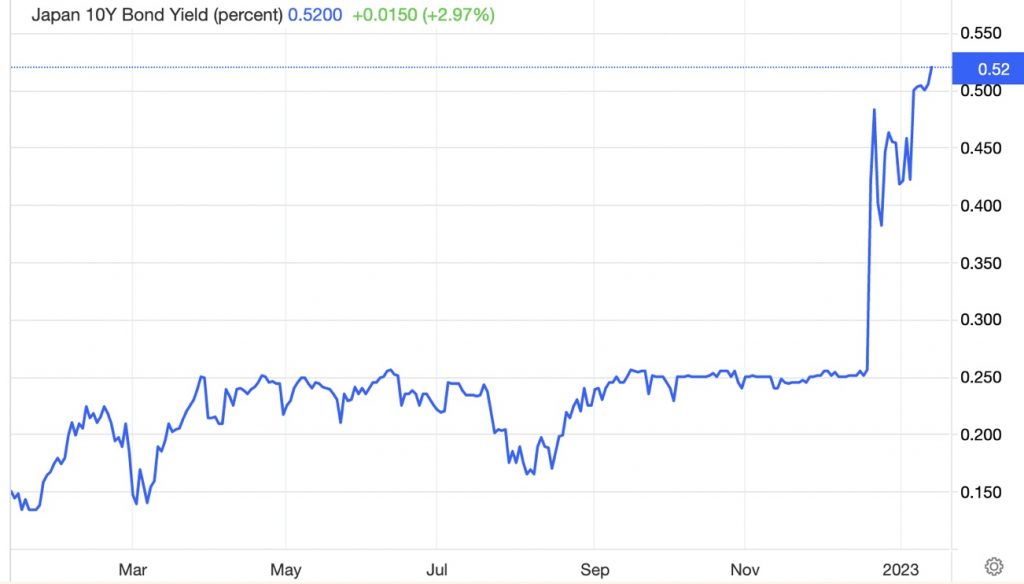 There is little doubt that the BoJ will have to move its yield target higher. In December, CPI inflation registered 4%, above the forecast 3.8% and double the 2% band. This matters for the dollar, because Japan is a larger exporter of capital than the EU, and her institutions have turned sellers of foreign markets. Furthermore, the carry trade which sold yen for dollars to arbitrage yield differentials still has some unwinding to do, and the sharp rally in the yen could become a rout for the dollar…

This Company Has A Massive High-Grade Gold Project In Canada And Billionaire Eric Sprott Has A Huge Position! To Learn Which Company Click Here Or On The Image Below.

China Adds Another 30 Tonnes Of Gold
At the highest levels, these forces appear to be understood. In December, China declared an addition to her official reserves of 30 tonnes. But Mark Bristow, the highly respected and well informed CEO of Barrick Resources revealed that his information was that China had actually acquired “in the higher 200s” tonnes of bullion in December. That the largest gold mining nation by output is selling US dollars for additional gold bullion in the international markets surely tells us something is up.

There is little doubt that Saudi Arabia’s move to accept petroyuan at the expense of petrodollars will have a major impact on how, not just oil producers but also the entire list of Asian nations, view the dollar. Meanwhile, North American based commentators are broadly unaware of the consequences of these pressures, adhering to the belief that there is only one reserve currency, which foreigners will need to continue to accumulate. Accordingly, they underestimate the forces driving the dollar lower and gold higher.

While a pause in gold’s rally appears likely, it could be dangerous to trade for a setback.

Eric King:  “Simon, I think some people were stunned by the announcement this morning from IAMGOLD stating that their Nelligan Project now has a monster 5 million ounce resource. This is only 9 kilometers from your property, and as you already know, you are rapidly expanding your resource with the continued solid drill results your team continues to deliver.”

Simon Marcotte:  “Yes, Eric, that announcement makes this camp very, very real and has put this camp on the map in a big way. A 5 million ounce deposit like this increases the value of the ounces surrounding it in a big way. We continue to be impressed by the results from the 2022 drill program. Results continue to show high-grade gold over considerable widths along strike and down dip. We still have a lot of drill results to come. We remain on track for an updated resource estimate on Philibert in the next few months, which we trust will establish Philibert as a pillar of this rapidly emerging gold camp.

Keep in mind that in 2022, Norther Superior consolidated pretty much everything surrounding Nelligan, once again increasing the value of those ounces as they can ultimately be part of an integrated mine plan.

The year ahead promises to be a busy and exciting year. Not only do we still have 23 holes pending from the Philibert program, but results from the recently completed drilling campaigns at Lac Surprise and Croteau Est, cumulating over 19,000 metres, will also provide for significant news flow in the weeks and months ahead, leading to the resource calculation on Philibert. Northern Superior Resources, symbol SUP in Canada and NSUPF in the US.