Here is a major update on the gold and silver markets.

Gold Bulls Stay Resilient
October 16 (King World News) – Ole Hansen, Head of Commodity Strategy at Saxo Bank:  “Gold has now spent more than two months trading sideways around $1500/oz. From a chart perspective the lower highs point to fading momentum. The same formation however could also signal the emergence of a bull-flag which, if broken above $1510/oz, could see it resume its rally. A deeper correction to $1450/oz or even $1415/oz would do little to remove the long-term bullish view many currently hold on gold. Only a break below $1380/oz, the old range top and 61.8% retracement of the June to September rally could change this view. (See chart below). 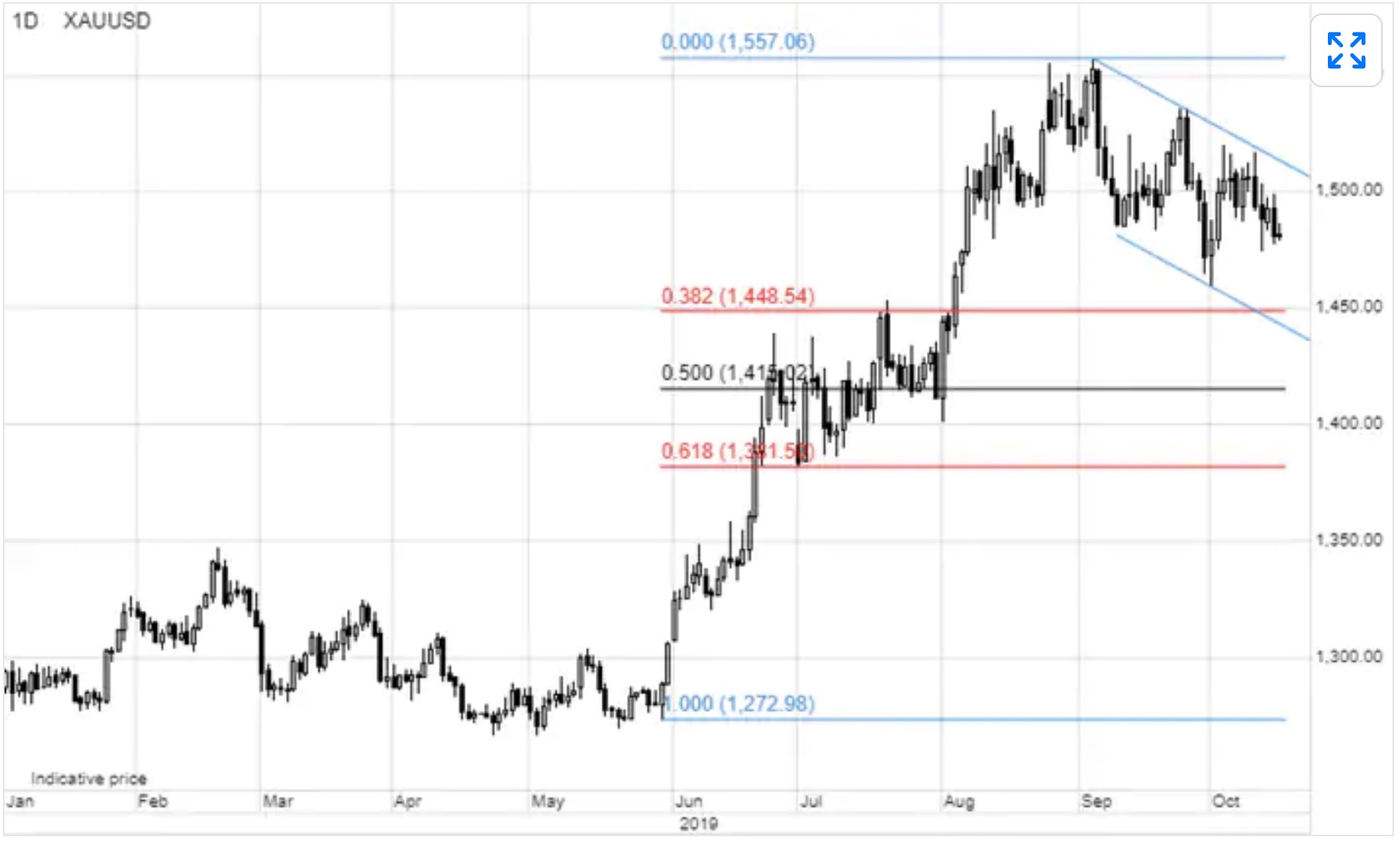 Gone for now is the roaring bond engine which back in June helped the yellow metal break above $13850/oz and with that out of its year-long range. But despite seeing bond yields stabilize following their rapid decent, U.S. stocks near record high and the outline of a trade deal emerging, gold has nevertheless managed to avoid a major correction…

An indication that it remains in demand, not only from short term speculative players – who otherwise would have tried to send the market lower to squeeze out longs – but also real money investors looking for diversification amid a slowing global growth outlook and various geo-political risks.

At the annual London Bullion Market Association conference just held in Shenzhen, China, the attendees were asked in survey to say where gold, silver, platinum and palladium would be trading by this time next year. The results were the following:

While not that surprising to see expectations for higher prices it was the sharp recovery in silver and platinum that caught my attention. Such outperformance is likely to assume that fiscal stimulus programmes may emerge to replace failed central bank experiments with low and negative interest rates.

The below charts show some of the current drivers impacting the price of gold and with that also silver and to a lesser extent platinum. 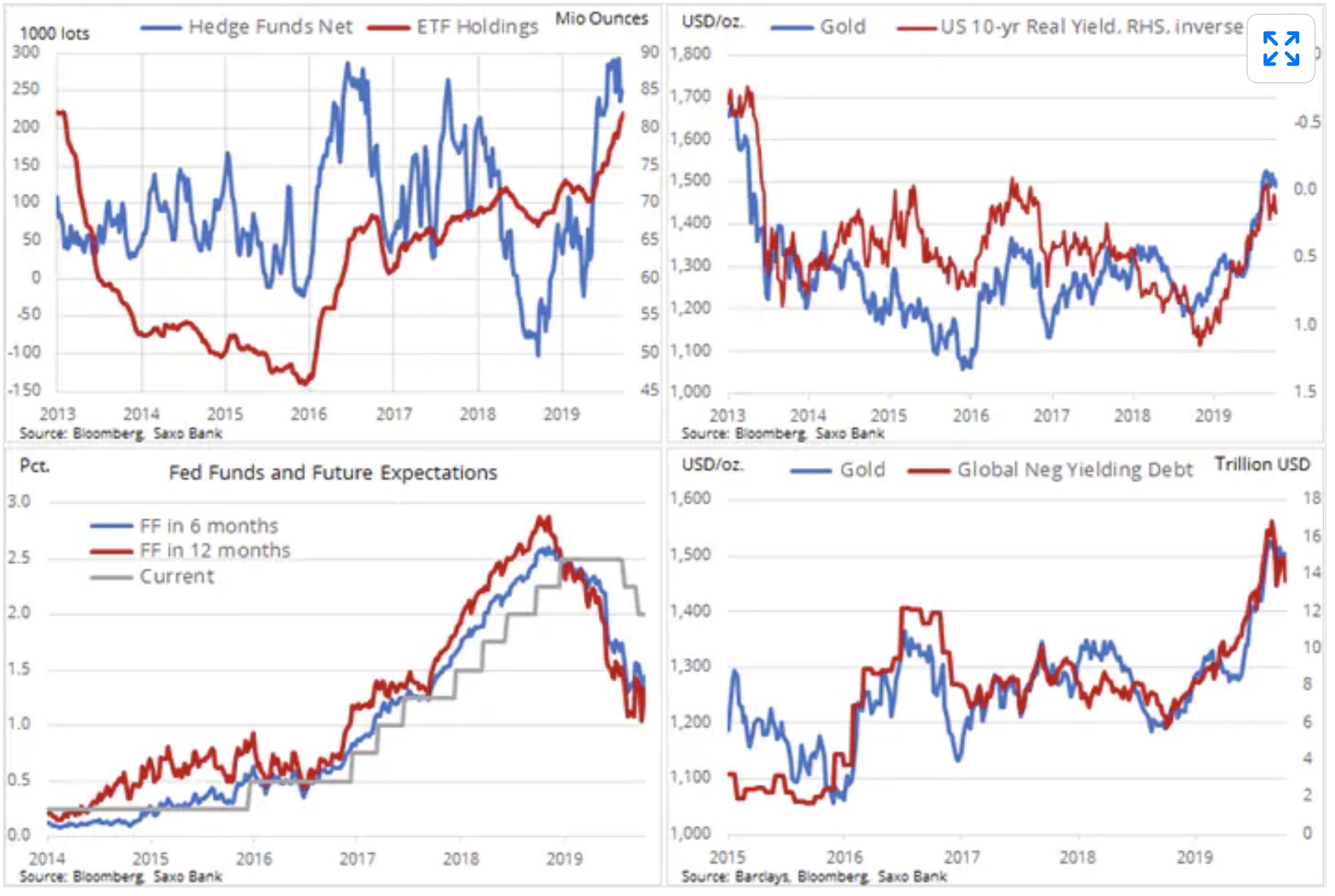 The recent rise in real yields and reduction in global negative yielding debt from 17 to the current but still formidable 13.4 trillion dollars have both helped reduce but not remove the appetite for investment metals.

Total holdings in bullion backed exchange-traded funds have seen a relentless rise since May and is currently just 26 tons below the December 2012 record. Hedge funds maintain a near record net-long through futures and it is the potential reduction from this category of traders that currently poses the biggest challenge. (See chart above).

Following a period of consolidation, we see gold move higher to reach $1550/oz by yearend before moving higher into 2020.

Our main reasons for maintaining a bullish outlook for gold and with that also silver and platinum, given relative value plays, are:

Summary:
Gold remains range bound around $1500/oz and on the lookout for the next driver. Gone for now is the roaring bond engine which back in June helped the yellow metal break out of its yearlong range.

Cashin – Fed Engaged In More QE Than In 2013
READ THIS NEXT! Art Cashin – Yes, The Fed Is Engaged In QE And It Is Larger Than It Was In 2013! CLICK HERE TO READ

KWN has released the powerful audio interview with Egon von Greyerz and you can listen to it by CLICKING HERE OR ON THE IMAGE BELOW.

Gold Continues Its Correction, Fed Closes In On ECB, Plus World Economy In Trouble CLICK HERE TO READ

This Is What Is Moving Markets Today CLICK HERE TO READ

Art Cashin – Focus Is On China, London And Syria CLICK HERE TO READ

Yes, Russia To Unleash Black Swans Against West But Here Is The Scary Part