Gold May Have Bottomed Today, Plus Look At What Hit The Lowest Level Since 1979

The gold market may have bottomed today, plus look at what just hit the lowest level since 1979.

Gold Bottom
July 21 (King World News) – Fred Hickey:  Today’s intra-morning reversal COULD signal a bottom – we’ll only know in hindsight. What I do know is that in the over 2 decades I’ve invested in PM’s, the couple of times Managed Money went net short: 2015, 2018/19 – I was rewarded very handsomely for buying at low prices.

Very heavy gold physical buying out of the East in recent weeks, as usual when the highly levered NY/London speculators have tried to stampede other (mostly Western) gold investors. That’s the specs game -concentrated paper gold selling/shorting to instill fear and cause selling panic.

The Easterners (Asians & others) always buy PMs when they’re given the opportunity at low prices. They help set gold/silver floor prices. The hedge fund manipulators come in and cover their shorts and buy too… once they realize their push is over. Losers are those that panic sell…

Rate Hike
Peter Boockvar:  Firstly, the ECB did the right thing in raising rates by 50 bps back to a still embarrassing level of zero with inflation above 8% but with growth slowing notably. It’s the first time since 2014 that it’s not in negative territory and expect a plus sign in front of rates in September. They also gave details on their Italian bailout plan, I mean their anti fragmentation plan and said they will have flexibility in using it (not subject to ‘ex ante’ use).

People Are Getting Laid Off
Initial jobless claims rose to 251k from 244k and that was 11k more than expected. That’s also the first time above 250k since last November. The 4 week average rose to 241k from 236k. Continuing claims rose 51k to 1.384mm, the highest in 3 months. 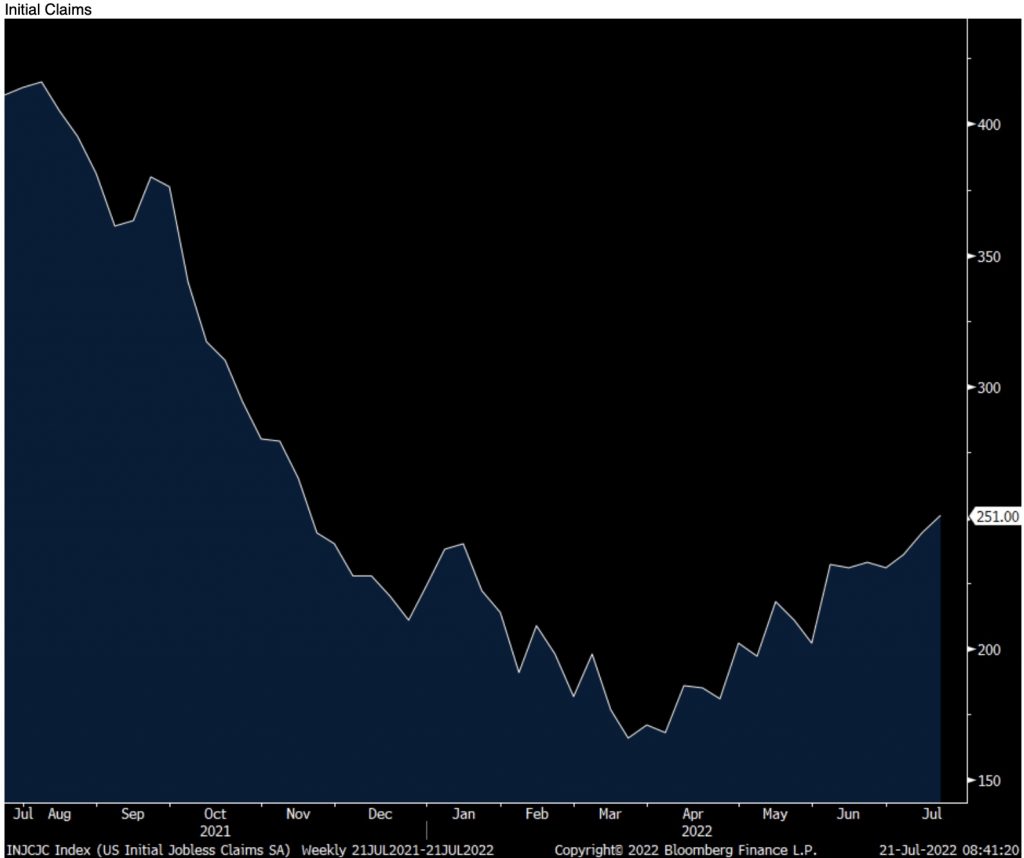 Pace Of Firings Hits 8 Month High
The bottom line is becoming ever more clear in the trajectory of the pace of firing’s to now an 8 month high. Making the case for a strong economy because the unemployment rate is just 3.6% is missing the historic turns. The economy peaks when the unemployment rate bottoms and vice versa. And the pivot off the inflection point is when the economy turns and that is currently happening. The Fed has been able to stand on the crutch of a solid labor market in getting very aggressive with monetary policy but now as the labor market is in the process of turning, we’ll see how long that can last.

Manufacturing Collapse
The July Philly manufacturing index fell to -12.3 from -3.3 and that was well worse than the estimate of +.8. It’s the 2nd month in a row with a negative print for the first time since the 2020 shutdowns. 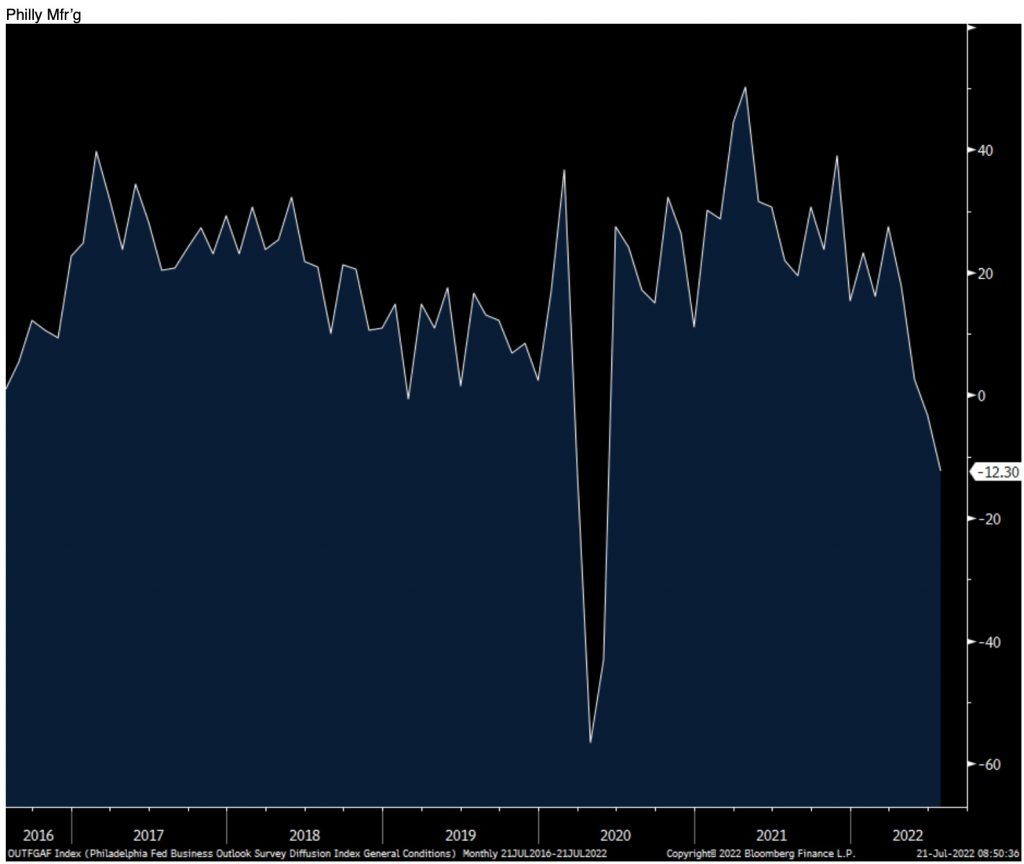 New orders plunged to -24.8 from -12.4 and that is the worst since May 2020. Backlogs fell further below zero and inventories declined to -9.3 from -2.2. Delivery times went negative and prices paid and received both eased along with the drop in commodity prices. Employment and the workweek also softened with the former at the lowest since May 2021. 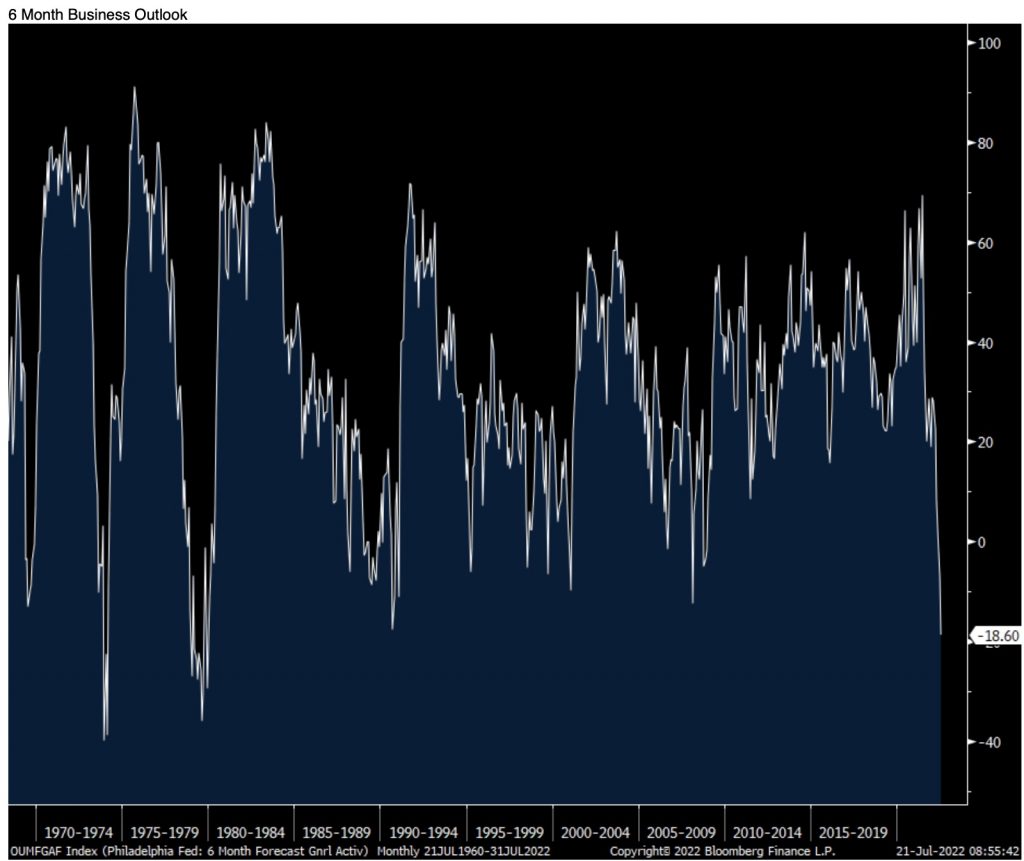 Bottom Line…Trouble
Bottom line, this data point is further evidence of the manufacturing weakness now upon us as goods demand has been greatly satiated and then some over the past few years at the same time inflation has made everything more costly. So we have consumer spending slipping in REAL terms, residential real estate contracting, global trade weakening and now capital investment softening. A recession is upon us.

When An Economy Shifts
When an economy shifts to one of slowing activity from growth it all doesn’t happen at once but because of that there are always confusing signals being sent as different industries experience different time frames with this pivot. We know housing is clearly slowing and subprime delinquencies for auto’s are rising (stated again by auto retailer Lithia this week). We know some areas of the supply chain like certain goods sold at Walmart and Target that people bought too much of over the past two years have too much and are being marked down.

But, because of ‘just in case’ now being the inventory management focus of choice and memories over the past two years of not having enough inventory, there is a concerted effort on the part of some (we heard this from Hasbro this week) to make sure they are stocked up so as not to be short of anything. We see the Philly manufacturing survey today but what was noteworthy with NY last week was the current state of things jumped but the outlook tanked as just maybe all the inventory needs in this new world order have been satiated.

With Hasbro, they are not messing around with having any shortages for Christmas so inventories have gone up sharply in anticipation. For those producing those goods, shipping them and stocking them, that seems like economic growth is just fine but it’s not sustainable if end demand is inevitably faltering. Maybe that explains why banks still see decent economic growth and C&I loans have gone up? Maybe that is why even though spot trucking rates have fallen sharply, contracted rates are hanging in?

There is also a clear differentiation in the newly forming spending habits of different income groups. The CEO of AutoNation said sales are slowing for those auto’s priced below $20,000, particularly used ones. By the way, the average price for a new car is at a record high of $48,000 according to Cox Automotive.

With the labor market, and we’ll have an update today, the upward trend in the pace of firing’s is becoming more obvious but there is still unevenness in the labor market. Many tech companies are limiting hiring and even trimming workers that they over hired over the past few years but the airline industry and many within leisure and hospitality can’t find enough.

I guess my bottom line on this is that the destination to me is inevitable with the economy but the trip there is uneven.

Trouble In Japan
The BoJ overnight did nothing and while they raised their inflation forecast to 2.3% for this year, Kuroda said he has “absolutely no plan” to increase interest rates or its YCC cap as they also cut their GDP estimates. He was quite clear by saying “Right now, we need to continue to tenaciously pursue monetary easing.” By the way, he’s been doing this for 10 years now. He elaborated by saying:

“The economy is in the midst of recovering from the pandemic. Japan’s worsening terms of trade are also leading to an outflow of income. As such, we must continue with our easy policy to ensure rising corporate profits lead to moderate wage and price growth.”

On the continued yen weakness, he doesn’t think he can do much about it.

“I don’t think a small rate hike could stop yen falls. If we were to stop yen falls with rate hikes, we would have to raise rates a lot. That would inflict huge damage on the economy.”

Here’s one last quote from him of note:

“Allowing interest rates to rise about our target, just for the sake of protecting market function, would run counter to our objective of keeping monetary policy loose.”

As the Japanese banking system continues to die off from the lack of a yield curve, Kuroda continues to be mistaken in his belief that his policy is stimulative. And if the yen continues to weaken, it will do even more damage to the aging Japanese citizenry. Kuroda is really just a government employee that is financing the Ministry of Finance.

On his continued defense of current policy, the yen is weaker and JGB yields slipped in response.

We Like Uranium
The only thing of economic note in Europe was July French business confidence which fell 1 pt to 103 as expected but that is the weakest since April 2021. Manufacturing confidence was down by 2 pts, services, retail and construction by 1 pt while employment rose by 2 pts but after dropping by 3 in June. I really don’t see how Europe avoids a recession strangled by high energy prices, even though the French in particular are more immune because 70% of their energy needs come from nuclear which is now officially part of the EU ‘green’ approach. We still like uranium.