As we approach the end of July, this will signal the major breakout for the gold market.

Gold
By Michael Oliver, MSA (Momentum Structural Analysis)
July 24 (King World News) – Not quite there yet, but if gold can post a weekly close during this quarter at or above $1265, then this quarterly momentum chart (and comparable long- term momentum charts) will break out. By “break out” we’re referencing the peak weekly closing readings along the red horizontal. They all come out, credibly, with a weekly close at or above $1265. That’s $10 above last week’s close. 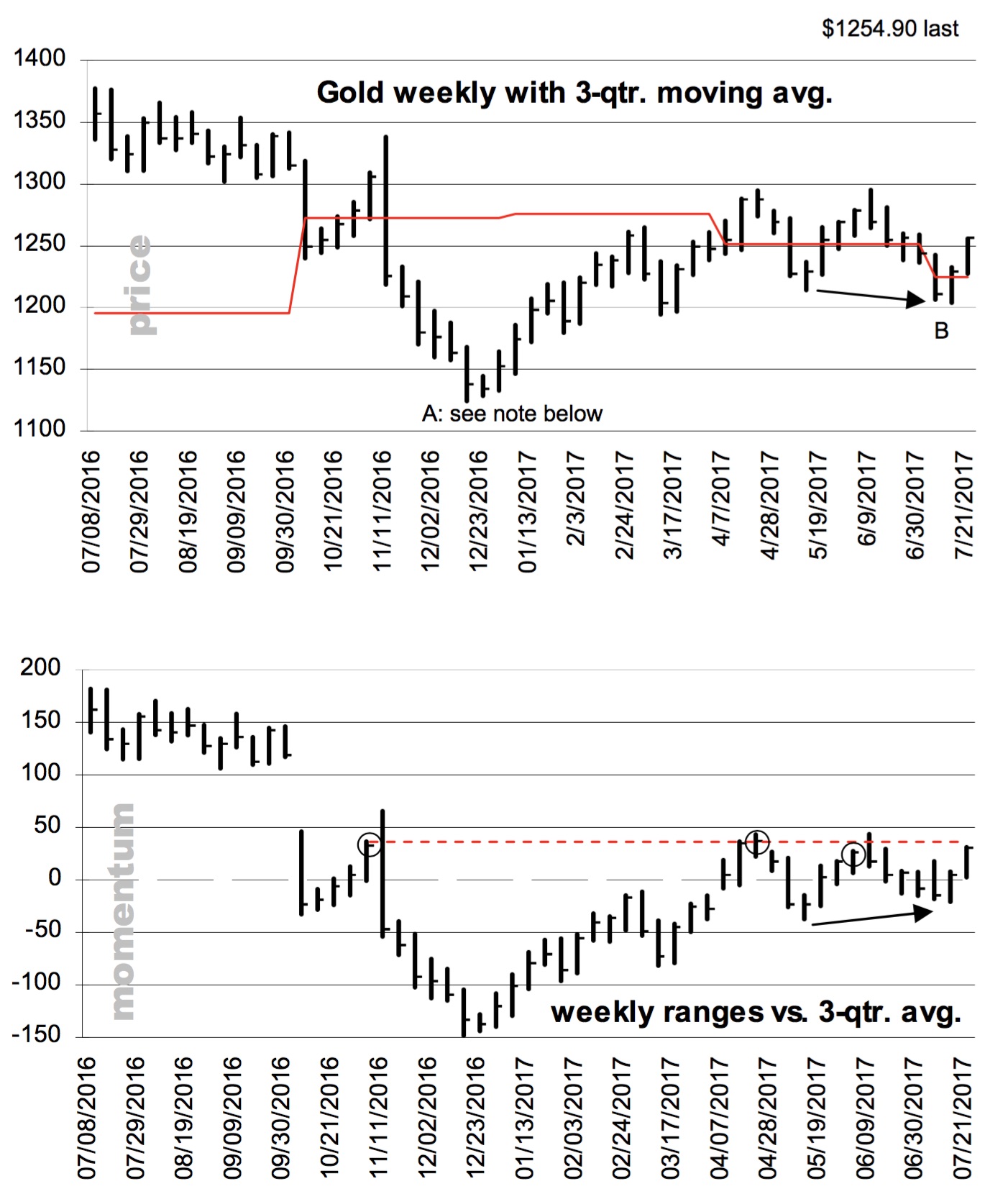 For those who were stopped out at the recent price low due to its take-out of the May price low, compare the price chart with the momentum chart. Contrasting arrows. Momentum did not threaten its May low. In other words, the recent drop was a “clean out” of an aged pattern of higher price chart lows that had been generated since the major corrective low of December. It’s best to reference momentum when assessing price. If momentum is chuckling at price, then price is probably being deceptive.

On an intraweek basis (without referencing weekly closing price), if gold trades to $1280 any time this quarter, then that is also a buy signal. (Recent dual price highs of this year were around $1295; so this $1280 level, based on momentum, will signal a breakout before price returns to its prior dual peaks. )

If you aren’t long or are seeking a secondary or add-on buy signal (the original MSA buy signal was in February 2016 between $1140 and $1160), then a $1280 trade or a $1265 weekly close should be considered that secondary long-term entry point for gold.

A: The December 2016 selloff was a serious test of the integrity of the bull trend for gold. MSA defined a number, before gold reached its low in December, that we did not want to see traded, as it would cause us to shift to long- term neutral. That number was $1119.60. Trading to that price would have caused annual momentum to post a downtick that meant a neutral stance was justified. The selloff low turned out to be $1123.90. MSA therefore remained bullish.

B: Before the recent low, MSA also indicated a number that we didn’t want to see traded: $1197. Again, it would have caused us to shift to long-term neutral. The low turned out to be $1204. MSA remains bullish based on long- term momentum trend factors, in particular annual momentum.

King World News note:  The bottom line is KWN readers around the world need to watch for a weekly close above the $1,265 level.  That will be the bullish breakout signal according to MSA.

***ALSO JUST RELEASED: Greyerz – We Are Now In The Frightening Endgame CLICK HERE.