Paul Volcker surfaces and what the elites are trying to foist on the unsuspecting public. 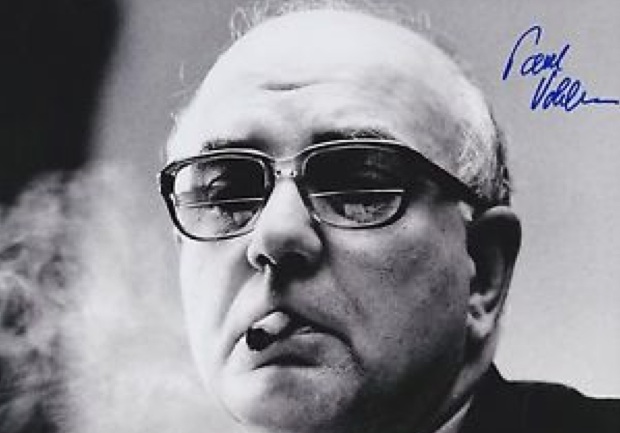 Volcker Surfaces
John Embry:  “Eric, the presidential campaign and debates have been so sophomoric as to be embarrassing to everyone connected to the whole process.  It’s so bad it triggered an article in the New York Times by two luminaries, Paul Volcker and Peter G. Peterson, titled Ignoring The Debt Problem…

John Embry continues:  “While essentially correct in title, it was so understated that it was almost comical.  They used the federal debt held by the public to assert that the ratio to GDP was only 75 percent, while in reality, accounting for total funded debt, it comfortably exceeds 100 percent.  They did not even bother to acknowledge the unfunded liabilities for Medicare, Medicaid, Social Security, etc, which are now several multiples of the funded debt.

What was perhaps most off-putting was their inference that there was a palatable solution to this issue if the new president just did the right thing.  This is a global problem that is so massive the only outcomes are ultimately hyperinflation and/or a debt deflation so severe that it will dwarf anything seen in the 1930s.  Given that Herbert Hoover is still reviled some 85 years later for presiding over the onset of the Great Depression, I’m not sure why anyone would want the job of U.S. president because what is going to transpire over the next 4 years will make President Hoover’s regime look absolutely pristine in comparison.

The New York Times was also lamenting the breakdown of trade talks between Europe and Canada last week.  In the article they made a very telling comment when they stated that “liberalized trade has amplified economic growth but the spoils have been largely monopolized by wealthy and corporate interests.  Truer words have never been spoken. Perhaps that accounts for the increasing backlash against the Trans-Pacific Partnership and the Trans-Atlantic Trade and Investment Partnership, which the elites are trying to foist on the largely unsuspecting public.

Switching to gold and silver, Alisdair Macleod recently stated that the gold price, based on historical comparisons, should be roughly 8 or 9 times the current price relative to the amount of fiat money presently in existence.  This is just more support for the estimates put forth at KWN by Egon von Greyerz and Stephen Leeb.  The current gold and silver price suppression is unquestionably more blatant than it has ever been in its long, sordid history, as the powers that be try to hold things together until the U.S. election.  Thus, investors must buy whatever physical gold and silver they can lay their hands on because time is getting very short to do so.

The upcoming price explosions in the metals will propel the gold and silver mining shares to unimagined levels.  One must remember that the HUI Gold Index was trading in excess of 600 just 5 years ago and is currently just above 200, so there is an enormous amount of room on the upside.”