As stocks remain near all-time highs and the price of gold and silver continue to be volatile, here is the remarkable truth about gold vs the stock market, and the all-important question, is a major turning point really only days away?

These signals were based on very long-term indicators varying from quarterly momentum to annual and on up to 200-wk. momentum (shown here): 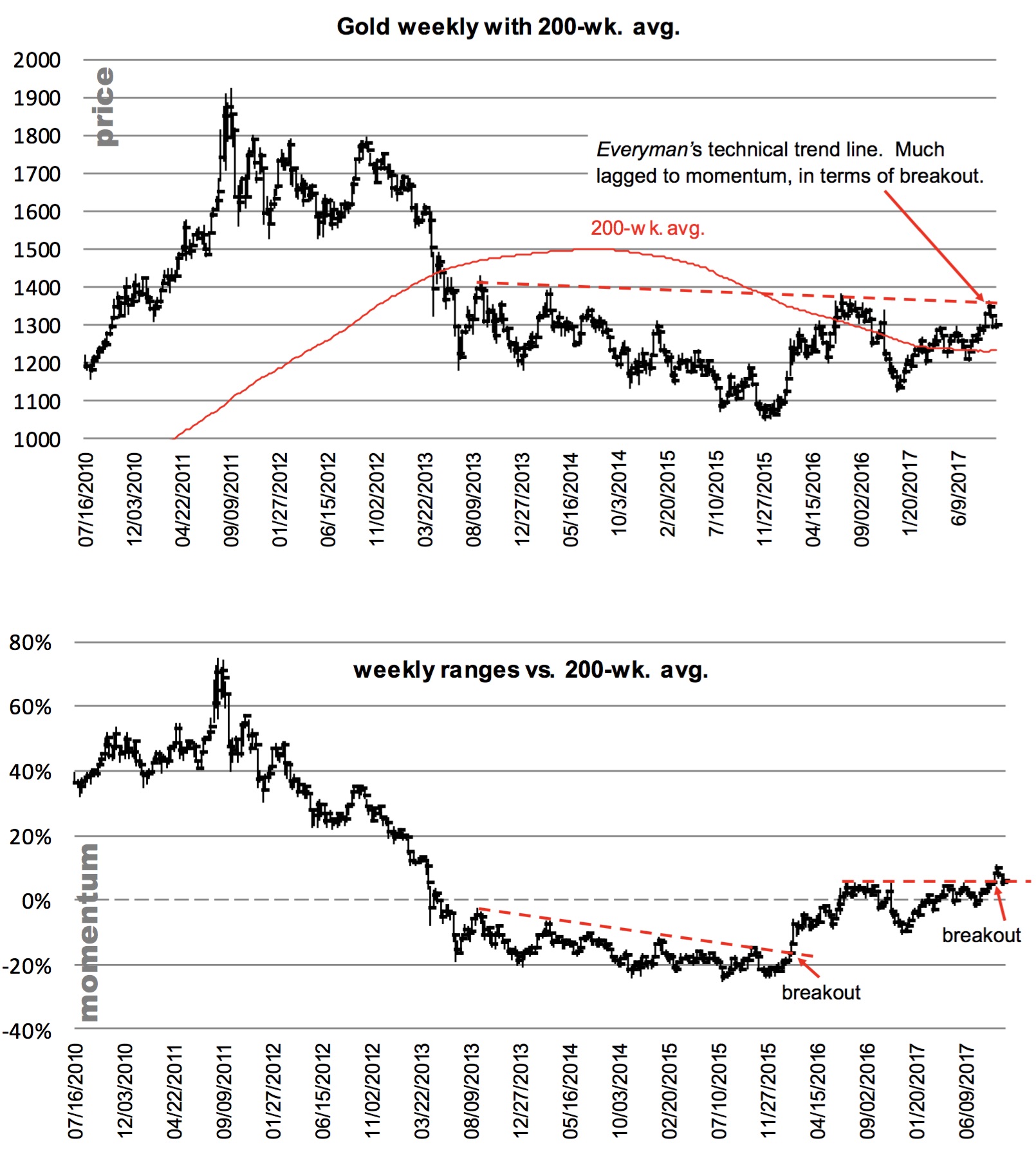 Primary/initial buy was issued in February 2016 between $1140 and $1160 trigger zone (first “breakout” highlighted above).

Secondary or add-on buy thresholds were crossed in the past two months (July and August) when weekly closes over $1265 and $1303, respectively, were  recorded. Those were labeled as possible points for investors to add to existing positions but  should be treated as secondary  levels, not places to begin to build major positions…

What is clear to MSA now is that while momentum action has cleared all hurdles that our work defines, price has once again butted up against a simple line plotted across rally highs since the latter part of 2013. Anyone can see it and anyone with crayon can plot it, and no doubt has.

“Their Final Line Of Defense”
That line was hit a few weeks ago and the sellers “played” the line again. We think it’s their final line of defense and once that price chart feature is overcome (closing out credibly over $1350 should do it) — and we believe it will be overcome soon (momentum has already overcome its equivalent lines of resistance) — then there is likely to be an awakening on the part of price-based chartists as to what gold has been doing over the past four years. Basing and advancing!

Long-term momentum has already based and broken out, but price, which is so often lagged to its own momentum, has yet to render the obvious-to-everyman sort of breakout. And we argue it’s that red line on the price chart that so many are looking at (labeled on right hand side of first chart).

Gold Still Outperforming S&P 500
Not noticed by most, but since the close of Dec. 31, 2015 gold has marginally outperformed the S&P500 on a percentage basis, even taking into account the several percent drop in gold of the past few weeks (while S&P500 lingers near its highs). We argue that major asset tops and bottoms are often associated with asset class preference shifts by investors. While smart money has probably already begun to vacate extended and central bank priced (non-market priced) stocks, gold is no doubt getting some of that divergent flow. And when stocks generate their first sharp selloff (we tend to expect to see a 5-8% drop between now and the close of the year) that should begin to generate more evident asset preference shift among investors as it rattles their confidence.

The Major Catalyst Is Days Away
But our recent analysis argues that the onset of that sharp initial stock market drop (major stock market vulnerabilities are likely reserved for 2018) is a Q4 2017 event, probably precipitated by violation of quarterly momentum trend structure by the S&P500. Therefore the delay or further congestion by price action of gold below that publicly (obvious) line over recent months is and was likely to persist until that initial shaking of the S&P500 occurs. And we think that vulnerability for the S&P500 is now set-up and ripe, probably for triggering very early in Q4. Days away.

That event on the part of S&P500, is probably a more important domino factor for gold than is any intermediate up or downswing in the Dollar. Because any shaking of faith in the pricing of equity markets will lead to investor movement to that which has felt good. And gold has actually felt good on a measured basis (ignoring its swings), beating the S&P500 over the past twenty one months. Shake the S&P500, even if its denouement is not fully evident until 2018, and gold is going to be one of the prime beneficiaries.