On the heels of yesterday’s global stock market turmoil and today’s attempted rally, today one of the greats in the business sent King World News a powerful piece warning about a black swan that will shock the world and rock the financial markets.  There is also a key note in here from market veteran, Jim Brown. 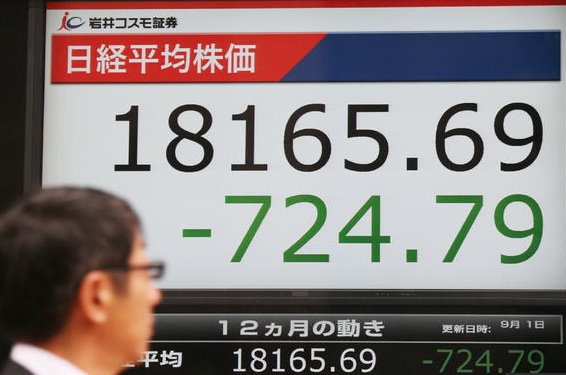 Japan And The Global Meltdown

Japan Joins The Fray – As noted above, Japan was a key factor in Tuesday’s global meltdown. To avoid reinventing the wheel, I’ll let my friend and fellow market veteran, Jim Brown, over at the insightful Option Investor tell the tale. Here’s a bit of what Jim wrote on the topic:

The overnight sell off was started by news out of Japan. Capital spending by Japanese companies fell – 1.8% in Q2. This reflects a slowdown in demand because of the first sales tax increase in 17 years. Corporate revenue and profits also fell an estimated -3.2% as the economy continued to deteriorate. Preliminary GDP estimates for Q2 showed a contraction of -6.8%. The revised estimates are due out next week. Mizuho Securities is predicting a decline of -7.9%. The prior week a report showed consumer spending declined -5.9% year over year for July. All of this negative data is coming from a country that is in the middle of a massive QE program and debt is now 230% of GDP.

The central bank has been buying 8-12 trillion yen in Japanese bonds every month and they have nearly exhausted the market supply. That equates to an average of $83 billion in QE purchases every month. The Mizuho Research Institute said the QE purchases could continue until 2020 in an unimaginable accumulation of debt. I have said multiple times in the past, “Japan is a bug in search of a windshield” and that windshield could be here sooner rather than later. 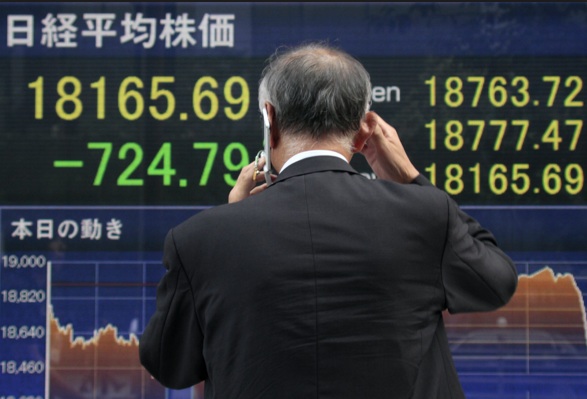 Obviously, with the economic data showing an accelerating decline in the economy the concerns are increasing over an eventual disaster. Since Japan is the third largest economy in the world, the implications are clear. If Japan’s economy collapses, it will be a global event. The Federal Reserve will need to factor in the new Japanese forecast before they hike rates.

The Japanese Nikkei declined -3.84% on Monday and odds are good it will see new lows in the days ahead.

We think traders would do well to put Japan and its markets back on their daily checklists.

A Cautionary Call – In his September letter, Bill Gross seems to suggest shifting to “cash or better yet, near cash” equivalents. We’ll look for details.

Overnight And Overseas – Shanghai fell only slightly thanks to a late session rescue rally that lifted it from an early 4% loss. Hong Kong, with no rescue team, fell 1.6%. Tokyo’s rally try and failed and it closed basically flat.

European markets are mixed to very slightly higher. Gold and the yield on the ten year are about flat with crude under pressure again. U.S. futures are rallying.

Consensus – Fed Tan Book at 2:00 will be pored over for a sense of a Fed move. If it shows economy sluggish, rate hike may be postponed. Crude may take center stage again. Stay wary, alert and very, very nimble. ***ALSO RELEASED: Government Propaganda Increasing As The Global Financial System Begins To Disintegrate CLICK HERE.

A Terrifying Lehman-Style Banking Crisis Is About To Be Unleashed