Here is a look at silver, skyrocketing food prices, plus an email from a KWN reader about multi-billionaire Hugo Salinas Price, the BIS, Putin & China.

Silver Is Preparing To Launch 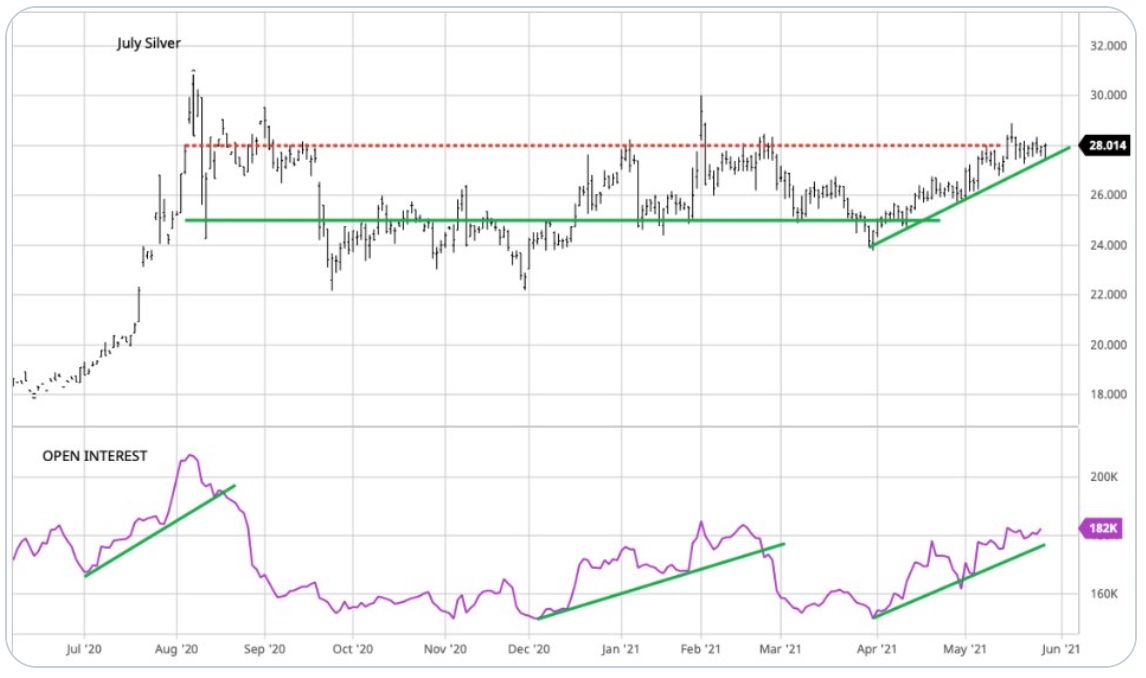 Skyrocketing Food Prices
Dean Christians:  Food prices have been surging of late. The last time they were this high on a y/y basis in 2011, emerging market stocks struggled. 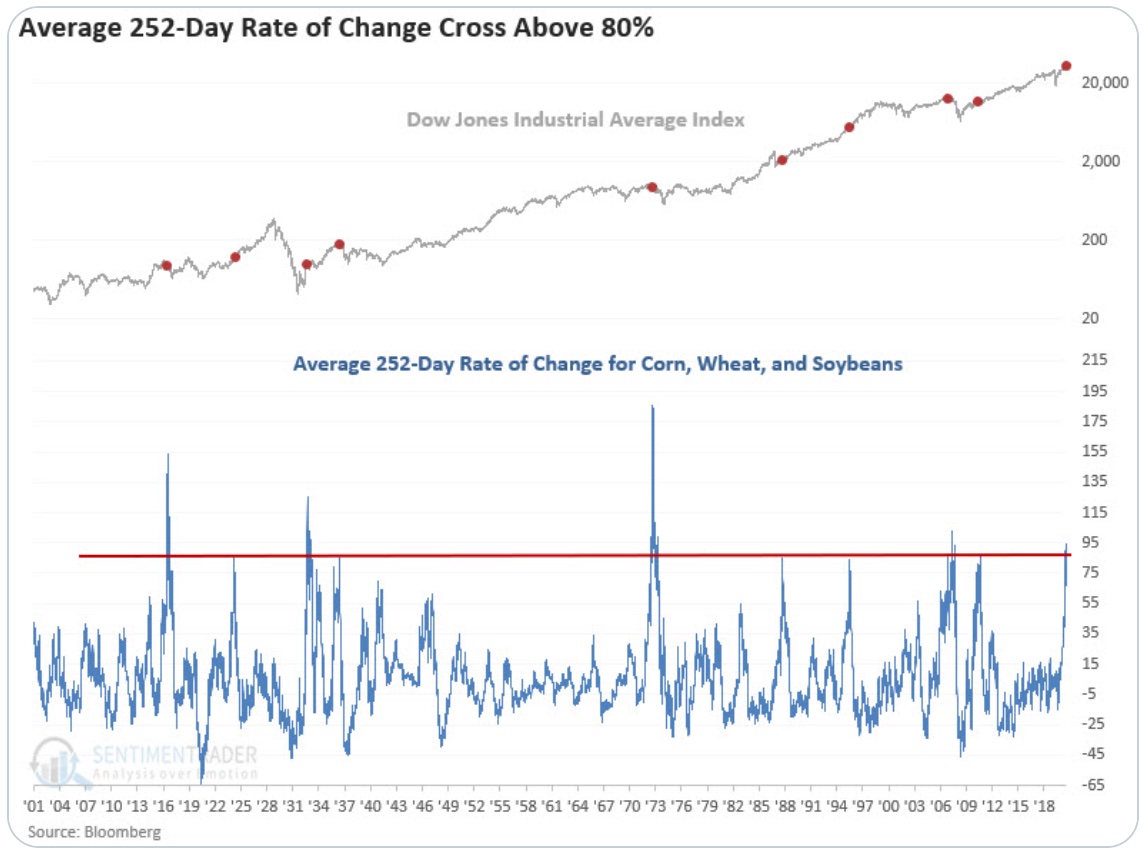 Email From A KWN Reader
The email is from a KWN reader:  I shared these thoughts with friends, based on the Hugo Salinas article today…..
regards,
George

Friends: This short article linked at the bottom is very interesting and could have epic effects on the financial markets worldwide, especially in the US and UK.

It basically explains that the accounting method of using ‘paper gold contracts’ that have been used for decades by US and UK banks to “sell” paper gold contracts and suppress the price of gold are coming to an end. A rising gold price means that currencies (backed by nothing but government fiat/laws, are becoming less valuable, less desirable, and their value in the world will fall.

This threatens the stability of national currencies and their entire economic systems. The primary way governments and banks have kept the gold price from exploding for decades is by constantly selling tons of ‘paper gold’, gold contracts for gold that does not even exist, and that is more than the annual mine production of the metal. The way banks have been able to do this is by an accounting trick allowed by the BIS (Bank of International Settlements) to count those paper gold contracts on their books as an asset, and not a liability.

This article indicates that Russia and China have threatened the BIS with changing the game and backing their two currencies with gold, which they have been accumulating for a long time. This would make their currencies much more desireable and stronger than the USD or any other currency. If the US loses its ‘world reserver currency’ status, it will no longer be able to spend more than it makes, or creates, by real labor and production of goods. This could be catastrophic for the US economy…(this is like taking the credit card away from a spoiled rich kid who doesn’t work and only charges things using daddy’s credit card- he’ll be broke, since he doesn’t work and doesn’t get paid)…

A brief history lesson:
In 1944, at Bretton Woods, an agreement was made between 44 countries, that the USD would be an international currency, meaning that all countries agreed to use it (and not their own currencies) for all major trading transactions between them, and their currencies were pegged to the USD. The USDollar at the time was backed by gold, in exchanges between countries (individuals did not have this option of trading dollars for gold), meaning those countries could send their physical dollars back to the US and get gold in return. (https://www.investopedia.com/terms/b/brettonwoodsagreement.asp)

In the late 1960’s, England started  exchanging  millions of US dollars they accumulated in their international trade with the US, for gold, at the rate of $35 for an ounce of gold. This came about because the US was spending more dollars for other countries’ goods than it was receiving for the sale of its goods.  (that’s like a person who uses a credit card to buy stuff but doesn’t earn enough to pay for it, so his outflow is greater than his inflow, and his debt is growing)  US national debt is over $28 Quadrillion. How did the US do that? It was creating money out of thin air, that wasn’t backed by anything of substance, and because it was the world’s reserve currency, they could get away with it…. other countries had to buy US dollars to do international trade. Other countries have known the US was inflating its money supply, thus devaluing the US dollars they are holding, and they don’t like having their asset diminished in value because of what they consider the US’s unfair and irresponsible money mechanics, creating dollars out of thin air.

As a result many countries had millions of US dollars, which the US was printing for free basically. Other countries could not do this. Because England was depleting the gold at Fort Knox, President Richard Nixon ‘closed the gold window’ in 1971, and said that the US would no longer honour that system. Now you could only exchange US dollars for other US dollars, which the US  government could create with a printing press, or more recently with zeros on a computer… ie for free…no work involved…no products created. But the USD was still the reserve currency, so countries have to use their currency even though they didn’t like it.

Keeping The Ponzi Going
To keep their Ponzi scheme going, the US and UK have allowed their banks to write paper contracts to sell gold (that they don’t even have) and show those contracts on their bank balance sheets as assets. That’s basically legalized fraud. By selling these contracts in the marketplace where gold is priced and traded (the COMEX in the US), banks have thus been able to suppress the price of gold, which keeps their worthless currencies from appearing worthless (if gold cost $5,000 per oz, compared to $35 per oz, would people think US dollars are getting more valuable or less valuable? What if it costs $10,000?).

Western Ponzi Scheme Ending On June 28
That legalized fraudulent accounting system of paper gold contracts being counted as assets is ending June 28, due to the threat of Russia and China to back their currencies with real gold….so the BIS has changed the accounting rules for banks because of their threat….that’s what this article is saying….the implications are staggering. The cost of foreign goods to the US could increase dramatically. To read the Hugo Salinas Price feature piece on KWN CLICK HERE.

Millions Impacted By Cutoff Of Benefits, But Are People Really Going Back To Work?