It appears that people just want to get away from the chaos as this indicator just hit an all-time record!

Highest Level Since 2001
By Peter Boockvar, author of the Boock Report
October 31 (King World News) – Here is what Peter Boockvar wrote as the world awaits the next round of monetary madness:  The Conference Board Consumer confidence index for October rose 5.1 pts to 125.9 and that is the highest since December 2000. Both main components contributed to the rise. Also, the answers to the labor market questions improved further. Those that said jobs were Plentiful jumped by 3.6 pts to the highest level since June 2001. Those that said jobs were Hard To Get fell .5 pt to the lowest since August 2001… 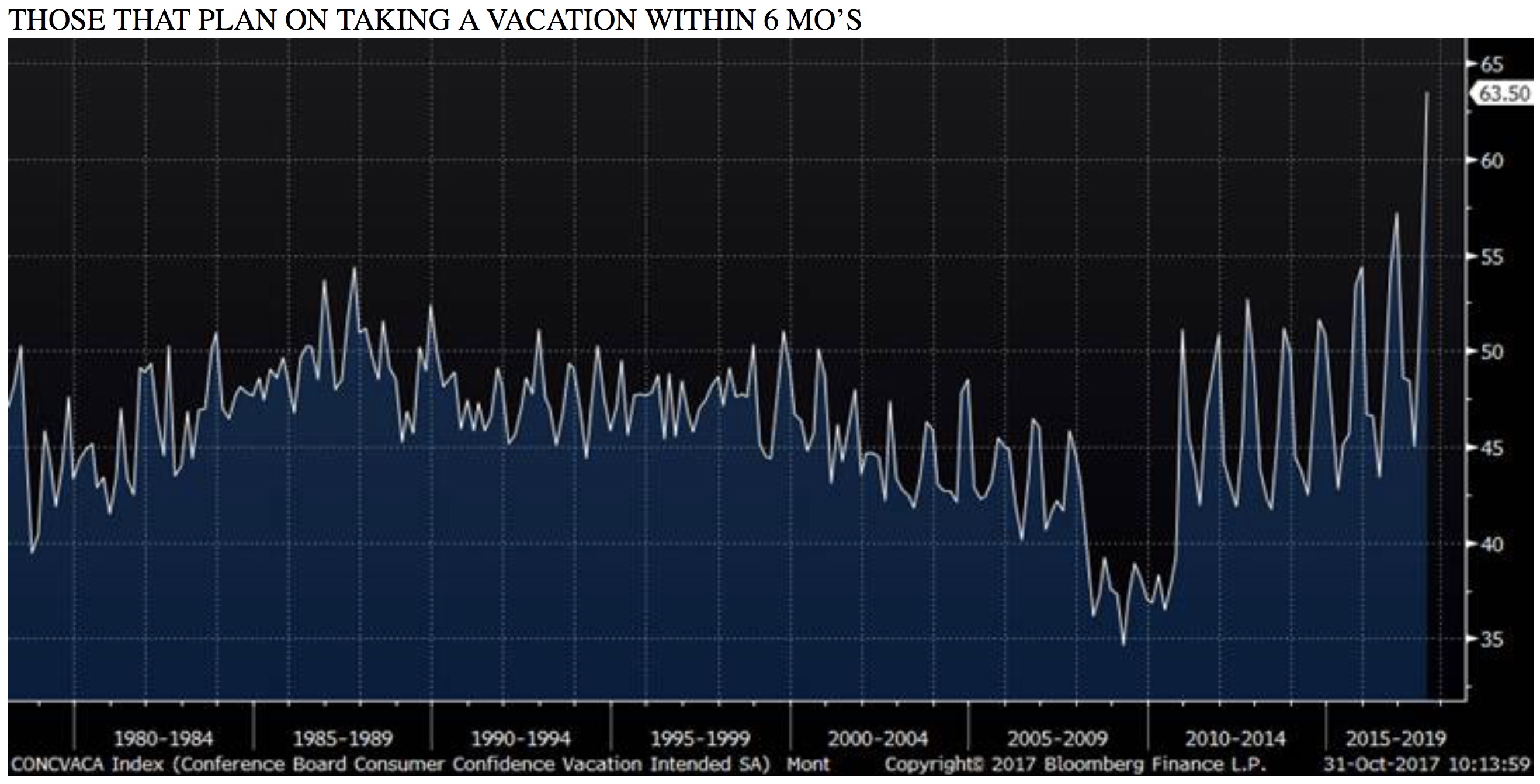 Lastly, there was a bifurcation in the confidence breakdown amongst ages. Those under the age of 35 saw confidence fall to the lowest level since February. Those aged between 35-54 rose to the best since November 2000.

Bottom line, notwithstanding how millennials feel, overall confidence is certainly robust driven by optimism with the labor market but I’ll say again, this data only is a snapshot and is rarely a good indicator to tell us what is to come and why it’s never market moving. In fact, when it gets very stretched either up or down it typically marks a top or a bottom.

Fed To Keep Raising Interest Rates In 2018
Following a string of good regional manufacturing surveys (except Richmond), the Chicago PMI index for October rose 1 pt m/o/m to 66.2 and that was 6 pts above the forecast and the best since March 2011. The components however were mixed. New orders and backlogs (43 year high) accelerated but inventory growth slowed and employment fell into contraction. Prices paid moderated due to “a partial stabilization in material prices and an abating of input shortages, both initially induced by the storms.” The reason for the backlog spike is “partially brought on by the disruption caused by the recent storms.” MNI also said “The storms across the country were also culpable for both longer supplier delivery times and firms stockpiling goods last month but in October Supplier Deliveries and Inventories softened.” With employment, “Firms have repeatedly reported a shortage of skilled and trained workers and have resorted to having existing staff working overtime or to hiring temporary workers. In what was a new development, there was evidence of firms losing their skilled workers for higher wages elsewhere in October, further reinforcing the shortage of this profile of employees. The underline is mine.

Bottom line, all the regional surveys has the ISM estimate expected to fall 1.4 pts to 59.4 but that is off the best level since 2004. What I underlined above is why the Fed will keep raising interest rates in 2018 after doing so in December (all else equal right now).

***ALSO JUST RELEASED: Greyerz – The Ultimate Panic Is About To Be Unleashed In Financial Markets CLICK HERE.