Fiddling While Rome Burns – Macleod’s Terrifying Warning
(King World News) Alasdair Macleod:  Technical analysts seem divided on where gold is going in the short-term. Some think it is consolidating before pushing higher to over $1,400, while others are calling for a steep fall into October, before gold resumes its bull market…

All I know is the motive force for owning gold is negative interest rates in Europe, zero rates in the US, and systemic risk in Italy, Portugal, and even Germany and Switzerland, with Deutsche Bank and Credit Suisse respectively. Look no further than these banks’ share prices.

The Fed’s monetary policy is a mess. It is a little known fact that bank lending in the US is increasing, and the closest thing we have to free market interest rates, USD LIBOR, is signaling that demand for money is now driving the rates. Higher LIBOR confirms the growth in bank lending, and you can see how LIBOR is moving in the chart below. 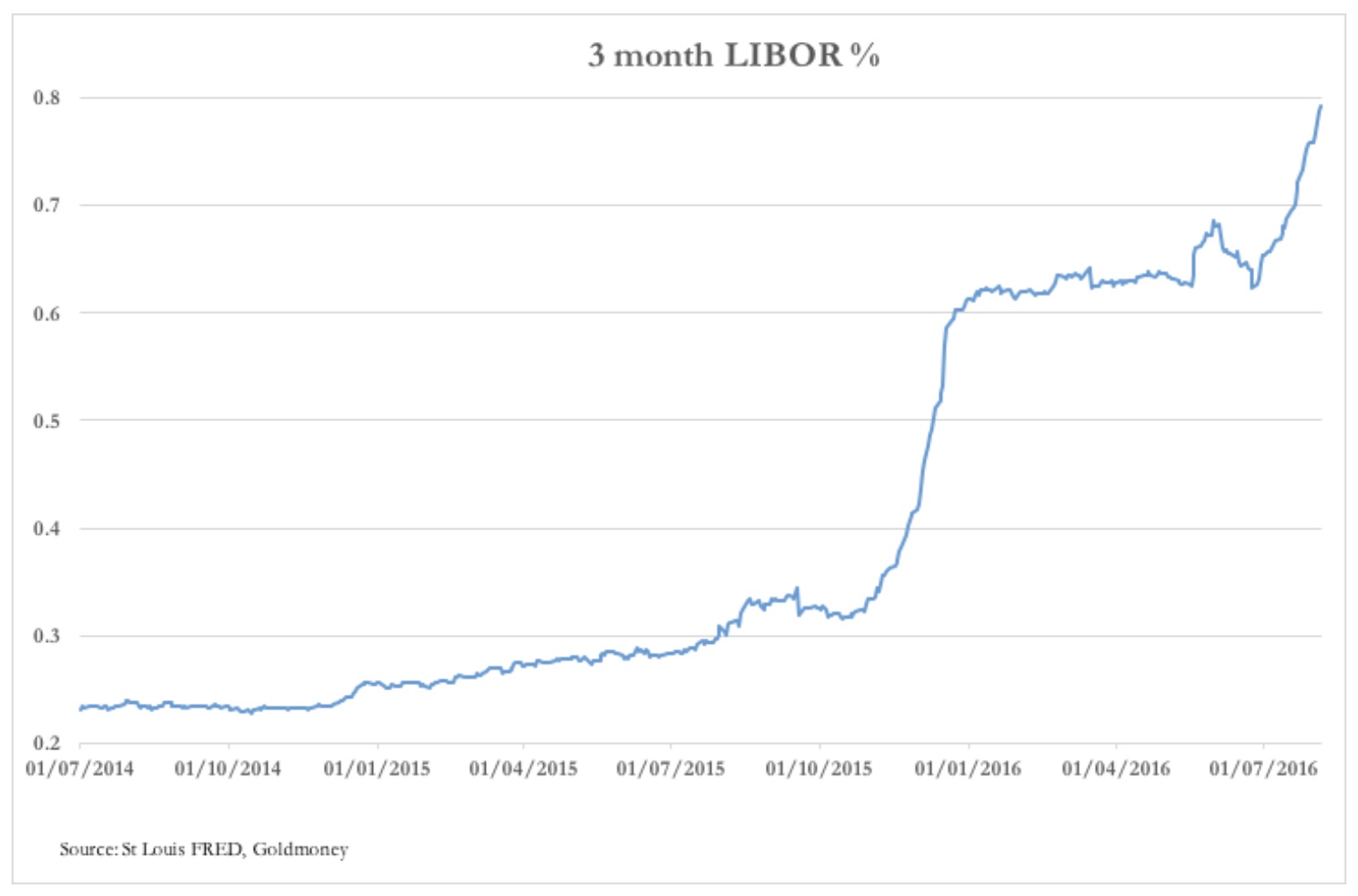 LIBOR Headed To The Moon
If this was a stock, you’d buy it because it is obvious it’s going to the moon. But it’s not a stock, it’s LIBOR, and it’s telling us that for whatever reason, businesses are borrowing money again.

To be fair, there is a distortion ahead of regulatory changes on October 4th. Prime money market funds are being encouraged to convert to holding T-bills and short Treasuries. This is creating a funding shortage for prime borrowers in the money markets. But how about the earlier rise, at the end of last year? That was real, which is why LIBOR is going higher.

We really don’t know why it’s going higher, other than that October deadline, but higher it is going. Meanwhile the Fed is borrowing from the banks at 0.25-0.5%, well under LIBOR. And 3-Month treasuries are yielding only 0.26%.

The next chart shows what is happening to bank lending. 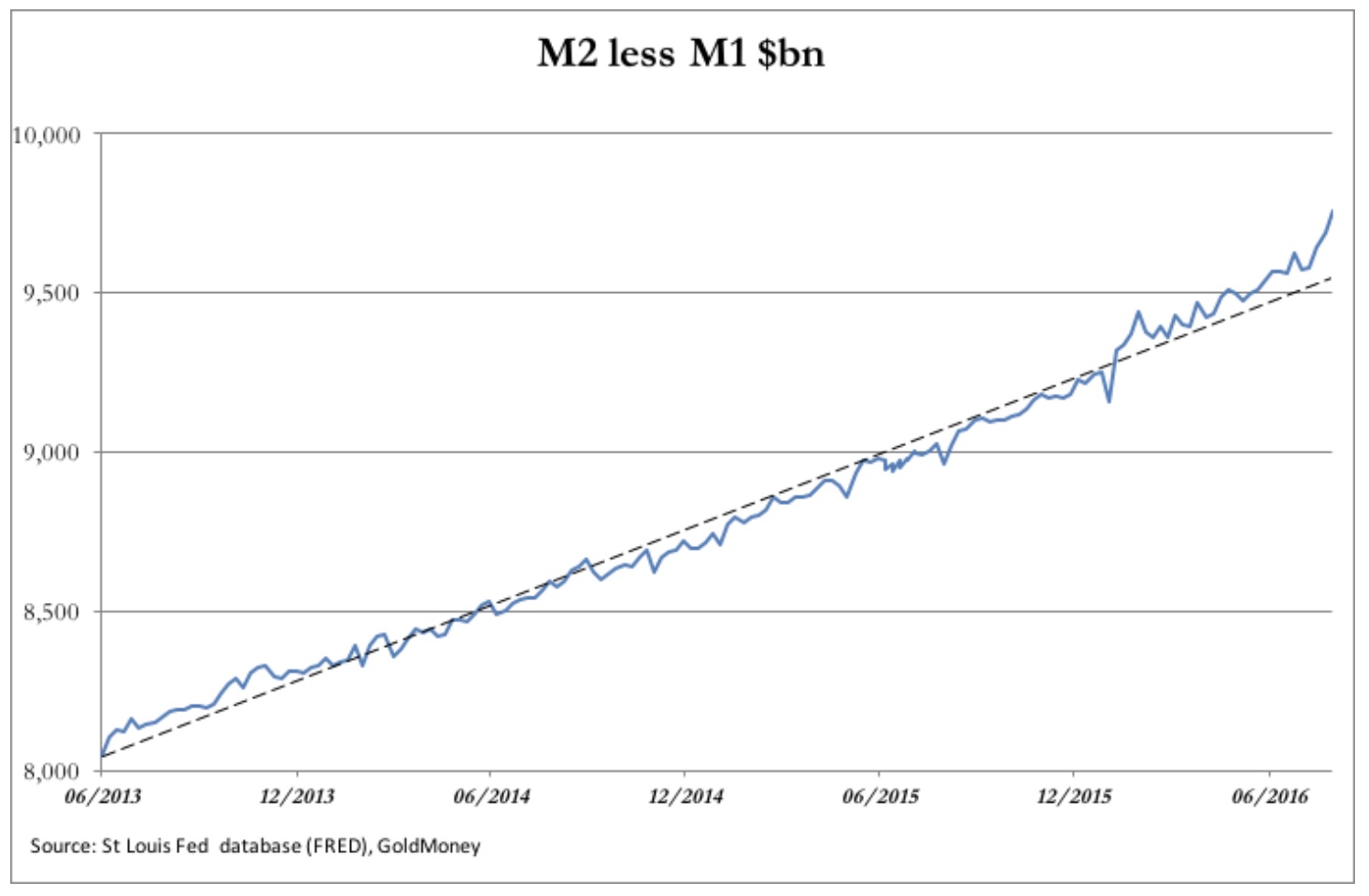 This Is Scary – Money Supply Shooting Out Of Control
This is scary, because it confirms that bank lending, which is broadly the difference between M2 and M1, is shooting out of control. The Fed should raise rates immediately, but it won’t, for the simple reason it doesn’t believe it has a problem, and it’s more worried about economic growth. But anyone with long experience of markets knows that this is the Fed falling behind the curve, and it will only raise interest rates too late and then by not enough.

This Caused The Price Of Gold To Skyrocket In The Hairy 1970s
The point about the increase in bank lending going into the economy is it will drive the rate of price inflation higher. The similarity with my memories of the 1970s, when central banks were slow to raise rates is becoming apparent. Last time it led to near-hyperinflation, and drove the gold price up from $100 to over $800, before Volcker raised the Fed Funds Rate to over 20%.

The difference today is the amount of debt. Volcker’s move was dramatic, but today’s Fed can only raise rates to somewhere between 2-3%, before setting off a debt mega-crisis. That’s not too far from where the 3-Month LIBOR rate is taking us. And by the way, 12-Month LIBOR is already over 1.5%.

Alasdair McLeod Issues An Ominous Warning
The technicians can argue all they like about the next move in gold, consolidate here or drop towards $1,200 in October. But I don’t think any of them have a clue how serious the situation has become.

***ALSO JUST RELEASED: Russian Leader Vladimir Putin’s Hand Is About To Get Much Stronger CLICK HERE.