As the chaos in global markets continues, legend Art Cashin warns liquidity strains are developing all over the world. Plus Ray Dalio, Ben Rickert and Peter Brandt weigh in on why the ongoing crisis will be catastrophic.

Hyperinflation Or Great Depression
June 17 (King World News) – Ben Rickert:  It’s becoming more & more obvious the Fed is out of options. Death by hyperinflation or death by great depression. Take your pick. Either way, the Fed’s credibility is heavily in doubt…

Wow!
Genevieve Roch-Decter, CFA:  This is not oil, a meme stock or even a shitcoin. It’s the average monthly mortgage payment in America up 50%. 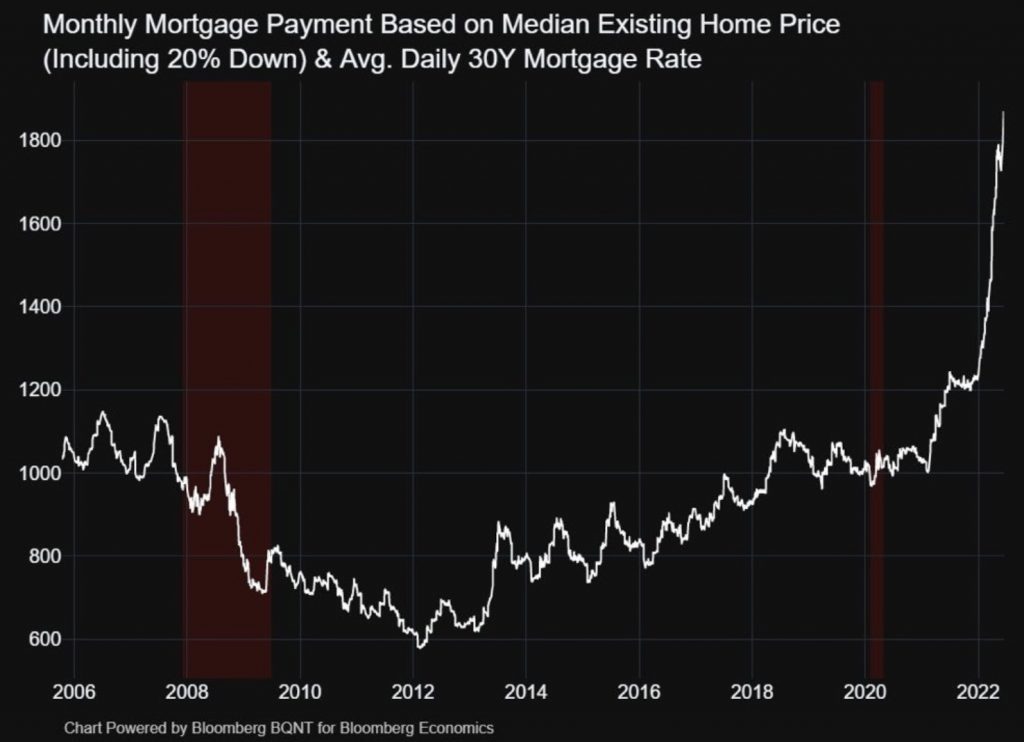 US Default In 1971
Billionaire Ray Dalio:  In 1971 when I was a young clerk on the floor of the New York Stock Exchange, the United States ran out of money and defaulted on its debts. That’s right, the US ran out of money. 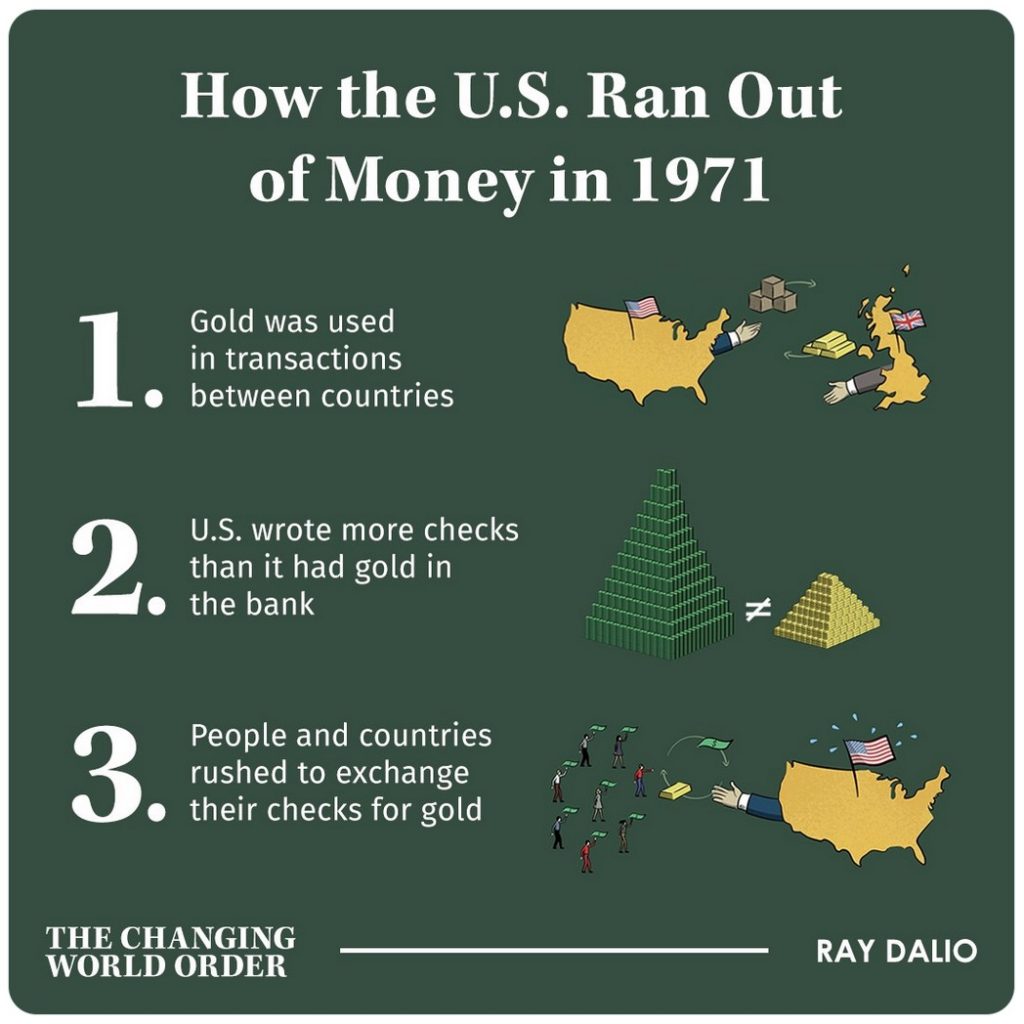 How? Well, back then gold was the money used in transactions between countries. Paper money, like the dollar, was like checks in a checkbook in that it had no value other than it could be exchanged for gold, which was the real money.

At the time, the United States was spending a lot more money than it was earning by writing a lot more of these paper money checks than it had gold in the bank to exchange for them.

As people turned these checks into the bank for gold money, the amount of gold in the US started to dwindle.

It soon became obvious that the US couldn’t keep its promises for all the existing paper money, so people holding dollars rushed to exchange them before the gold ran out.

Behind The Curve
Peter Brandt:  (The following note and chart is from thechartstore.com) The Fed has never in modern Fed history been so far behind the curve. Embarrassing. Not only did the Fed create this mess, they are way behind the curve in fixing it. Solution: Fed rate hike by 400 BPs, let stock market collapse and then hit the reset button.

Most Negative Real Rates In History
Including The 1970s! 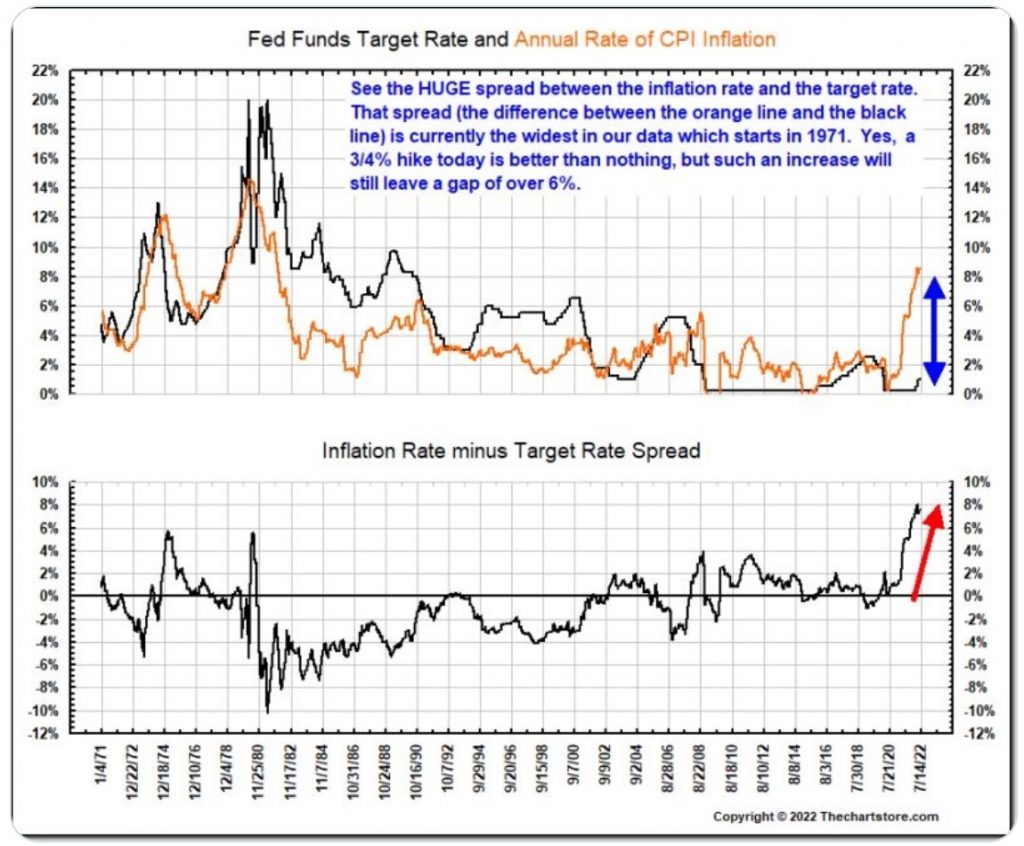 Liquidity Strains Developing All Around The World
Art Cashin, Head of Floor Operations at UBS:  On this day in 1972, a group of five men skillfully jimmied the lock on the service stairs of an elegant office complex. They would climb the stairs and slip into the offices of a powerful adversary, gathering data and planting bugs. But to do that they might need more equipment. And that would mean up and down the stairs several times – and several times through that door.

Too lazy to keep picking the lock, they decided to put duct tape over the face plate so the lock would not snap shut. The rest of the burglary went well. They set off no alarms. They eluded surveillance cameras and avoided the security team patrolling the office floor. It was almost perfect.

But a part-time watchman walking around the building was routinely checking doors. He pulled on one and it opened. Did someone forget to lock it? No, there was this piece of tape. So he called the D.C. Police. The building was Watergate. The office belonged to the Democratic National Committee and two years later, one of the largest electoral landslides in history turned to mush as a president resigned under threat of impeachment.

Luckily, that was the last time in American History that anyone tried to lay crime and cover-up at the White House doors.

And yesterday after more than 50 years, Americans particularly those in Wall Street found themselves distressed by the bungling experts in Washington. This time it was not the “Plumbers” who were supposedly skilled campaign operatives but, rather it was the Board of the vaunted Federal Reserve Board. We left the markets, wondering exactly where things were going.

Overnight we had quickly shifted from the rather celebratory, rejoicing that has gone on after the press conference and the 75bp hike by the Fed of the funds rate. The beginning of the surprise was at 3am New York morning time moved by the “SNB”, which surprised everyone by making a rate hike that no one had expected, and making one of 50bp, which was much stronger than anyone would’ve guessed if they were guessing. That set stocks off in the wrong direction. Even before the opening bell the futures were selling off. We covered a good deal of that in the late morning update. So to save time and space, why don’t we shift directly there.

… The day wore on and they looked, in early to mid- afternoon like we might see a final hour of freefall. As you would note in that late morning update, we talked about some secondary support in the S&P at 3,640. And wonders of wonders the lows in the afternoon turned out to be 3,639. Which is, once again good enough for Government work.

The concern had to do with the chance with the last 90 minutes, could turn into absolute freefall, and if that was true, late selling could have projected what I tend to call one of those Thursday/Monday/Tuesday turnaround bottoms. They usually come later in the morning, but we’ll take whatever we get.

We have forgotten, however that Monday we are closed, for the recently declared federal holiday of Juneteenth. So that whole Monday/Tuesday is invalid.

The late day selloff in stocks never fully materialized since, as noted by the very savvy afternoon anchor, Sara Eisen, bond yields began to pull back. So we saw that yields on the two year and the ten-year and the thirty-year had come off their highs and were pulling back. And she correctly assessed that could be one of two things, either a bit of a flight to safety, or the fact that people would realizing that the economic numbers that the Fed hiked into were a lot weaker than many had thought. And with that hinting that the hiking could be halting.

Anyway, good call Sara and that dip in the yields for whatever reason, prevented the market from making lower lows and going into a late afternoon freefall.

That brings us to this morning and as we mentioned Thursday again and again. It is scheduled to be a massive option expiration, with some speculating that it could lead to record volume, on the NYSE, we are not sure of that. But, we’ll watch carefully and gage the action. The other thing we were watch is follow-on with the other Central banks, particularly people like the SNB which has part of its package is rumored to have bought lots of US stocks, especially the high cap techs.

They may in fact become sellers of Apple, of which they own a lot, and other tech stocks. In order to raise money, while they try to protect their currency and maintain liquidity within their banking system.

This game is getting to be quite interesting folks. As we have said for days, we think there are liquidity strains developing all around the World and I think some of them maybe because of real or perceived movements by the Fed tightening up its balance sheet.

Keep an eye on what’s happening with M2 showing signs of contracting choppily, and I will be watching things like default swaps and the MBS ETFs. They call it the Chinese curse, “may you live in interesting times” and this is better than the Uncle Milty show.

Overnight the global markets continue to be somewhat confused although leaning to be a little bit better. In Asia, Japan is odd man out, as their government and their Central bank continue toward an easy posture, while others were moving away. Although, China which is also still leaning easy has its equity markets somewhat improved. European markets are improved on gossip that they may be moving ever so slightly closer to talks on Ukraine.

US futures are mildly better. At dawn the equity futures are discounting an up 250 opening in the Dow. A lot of focus will be on Powell, who speaks this morning and he may want to be careful, so as not to disrupt a market that is trying to stabilize. But, all eyes will be on that Powell’s speech.

As I said earlier, Monday is a Stock Exchange holiday, Friday before a 3-day weekend has a 60% to 68% mild upward bias. The shorts are nervous about 3-day weekends. So, we’ll hope that the seasonality, bears up and keep your eye on Apple and Bitcoin and there’s possible hints of that liquidity squeeze. But, stick with the drill, stay near the newsticker, keep your seatbelt fastened and stay nimble and safe. And have an absolutely wonderful long weekend.