With the Dow near 20,000 and the U.S. Dollar Index above 103, and the Electoral College finally confirming our 45th President, look at the startling differences between when Reagan entered office vs Donald Trump.

Trump: From Zero to Hero?
By Ronald-Peter Stoeferle, Incrementum AG Liechtenstein
December 20 (King World News) – Gold And The Illusion Of Monetary ValueThis time last year, we were expecting the US dollar to depreciate drastically since we regarded the then held opinion of four interest rate hikes in 2016 as defying implementation. At first, this assessment turned out to be the right call. The US dollar experienced a trend reversal, with the gold price recording a fantastic first half of the year. However, the BREXIT put an end to this development, and Trump’s victory turned the development by 180 degrees. 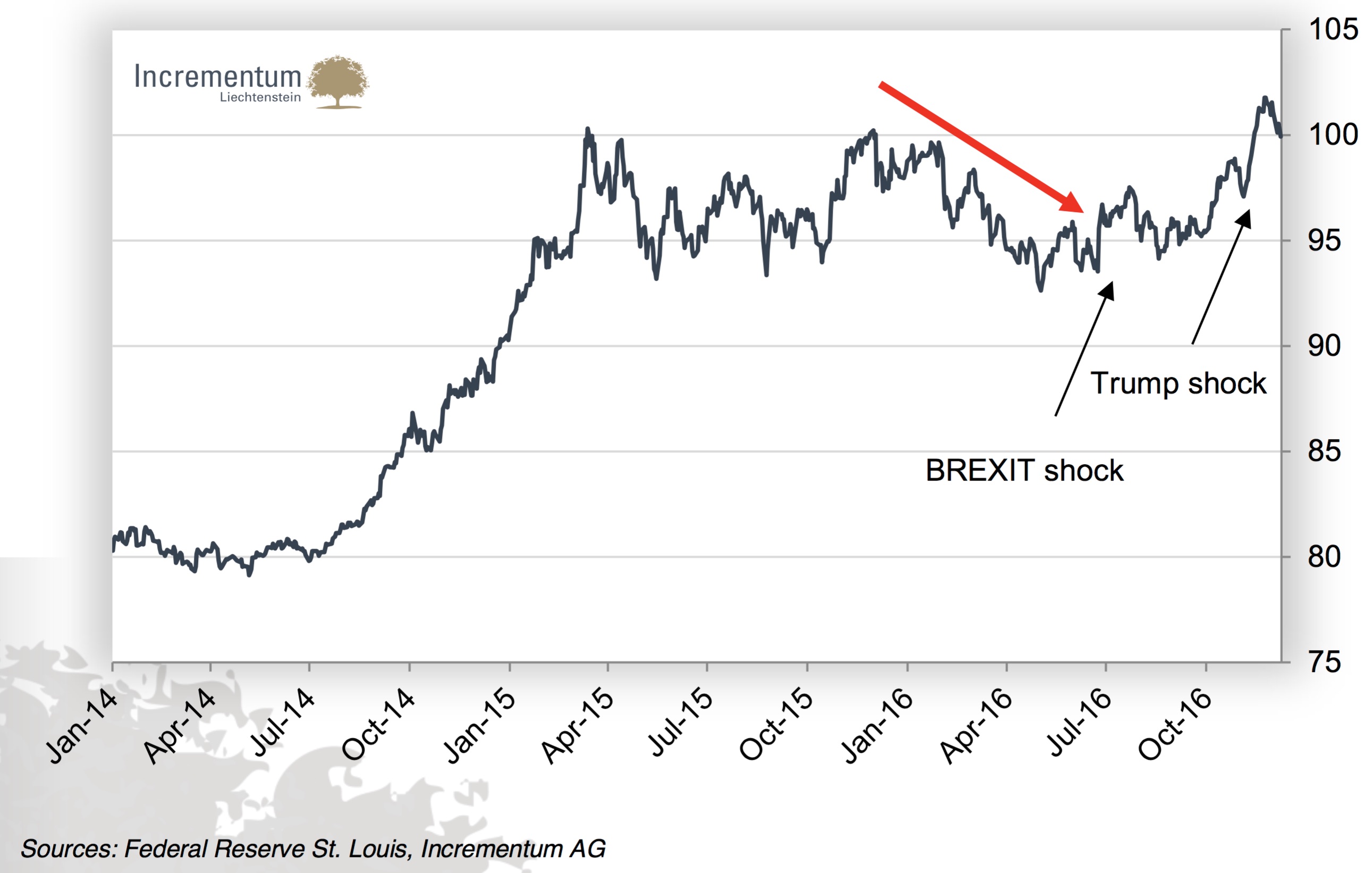 As early as June 2016 we dedicated a part of our tenth “In Gold We Trust” report to the phenomenon Donald Trump, and even at that time we regarded his election victory as possible contrary to the expectations portrayed by the media. This is also what we published as one of our ten propositions for the coming year at the International Precious Metals & Commodities Show in Munich in early November 2016, prior to the US election. In other words, we were less surprised by the result than many others; that being said, the reaction of the markets did indeed come as a surprise to us. But why did Donald Trump, much-criticized by the markets in the run-up to the election, cause a veritable euphoria on the US equity and foreign exchange markets?…

We attribute this situation mainly to the clear majority the Republican Party now holds as a (surprising) result of the US election. The Republicans will shortly command a majority in both chambers, and they are in the White House. There is also the hope that after years of below-average growth an effective, business-friendly US government might be able to sort out the mess by granting tax cuts and that it could generate a self-supporting upswing. In this context, market participants have likened the Reagan era to the forthcoming Trump era. From our point of view, this comparison does not hold; neither in terms of personalities nor when it comes to the economy: the economic situation that Reagan started out on is practically contrary to what Trump will be finding upon taking office! 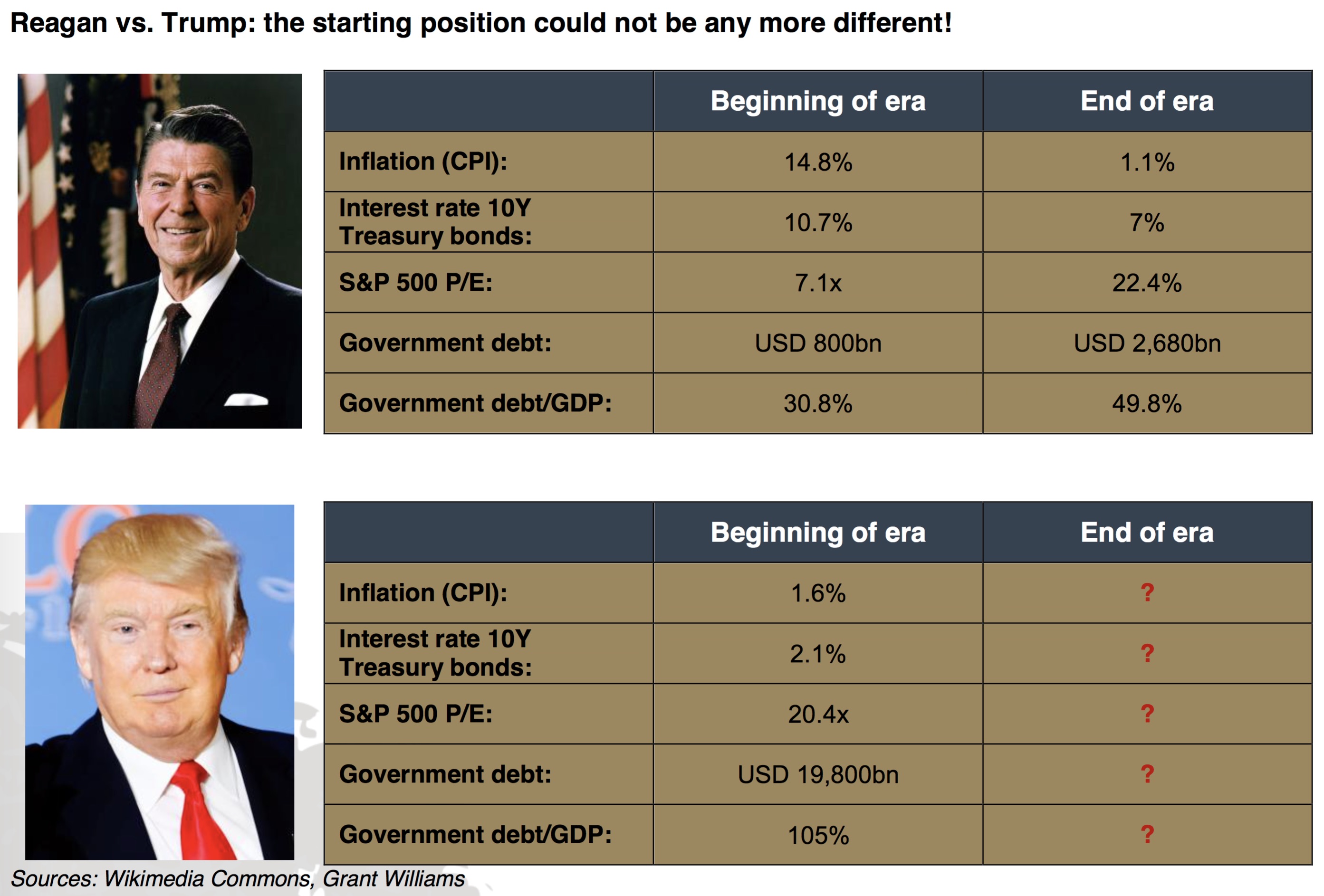 Throughout the election campaign, Trump had been playing the role of a savior who would “Make America great again” – both the failing economy and the stricken country. But the root causes of the current stagnation are more deep-seated, and an ailment cannot be cured by just changing doctors. “Let me through, I am the President!” – seems to encapsulate the aura of the alleged savior Trump. What is his recipe? The old story of debt-based, fiscal stimulus. Keynesian Economics 101.

The plan seems to currently allow for a tax relief of USD 500 billion spread across the next ten years. By comparison, Reagan’s tax cuts at the beginning of the 1980s were significantly more profound in relation to economic output. Given that government debt at the time was substantially lower, the program was also far more effective: as a result of the high level of government debt, the marginal utility of fiscal stimulus measures is nowadays much lower.

One should also ask the question how Trump’s economic program will be financed once the budget deficit has reached a dimension of unforeseen proportions. We believe that the idea of helicopter money – vigorously debated a few months ago – is very likely to worm its way into monetary and fiscal policy practice. However, given that it was a centrally planned monetary policy that led the US economy (and others) to its current place of misery, we believe that a centrally planned fiscal policy that picks up from where its monetary counterpart has left off will at best produce a dead cat bounce. From our point of view, a severe recession will inevitably occur in Trumps’ first term of office!

The strong US dollar will constitute another entry hurdle for Trump; the US currency is currently trading at a 14-year high, while the Chinese yuan is at a 7-year low. A continuation of this dynamic would rather indicate a disinflationary, if not deflationary, development. 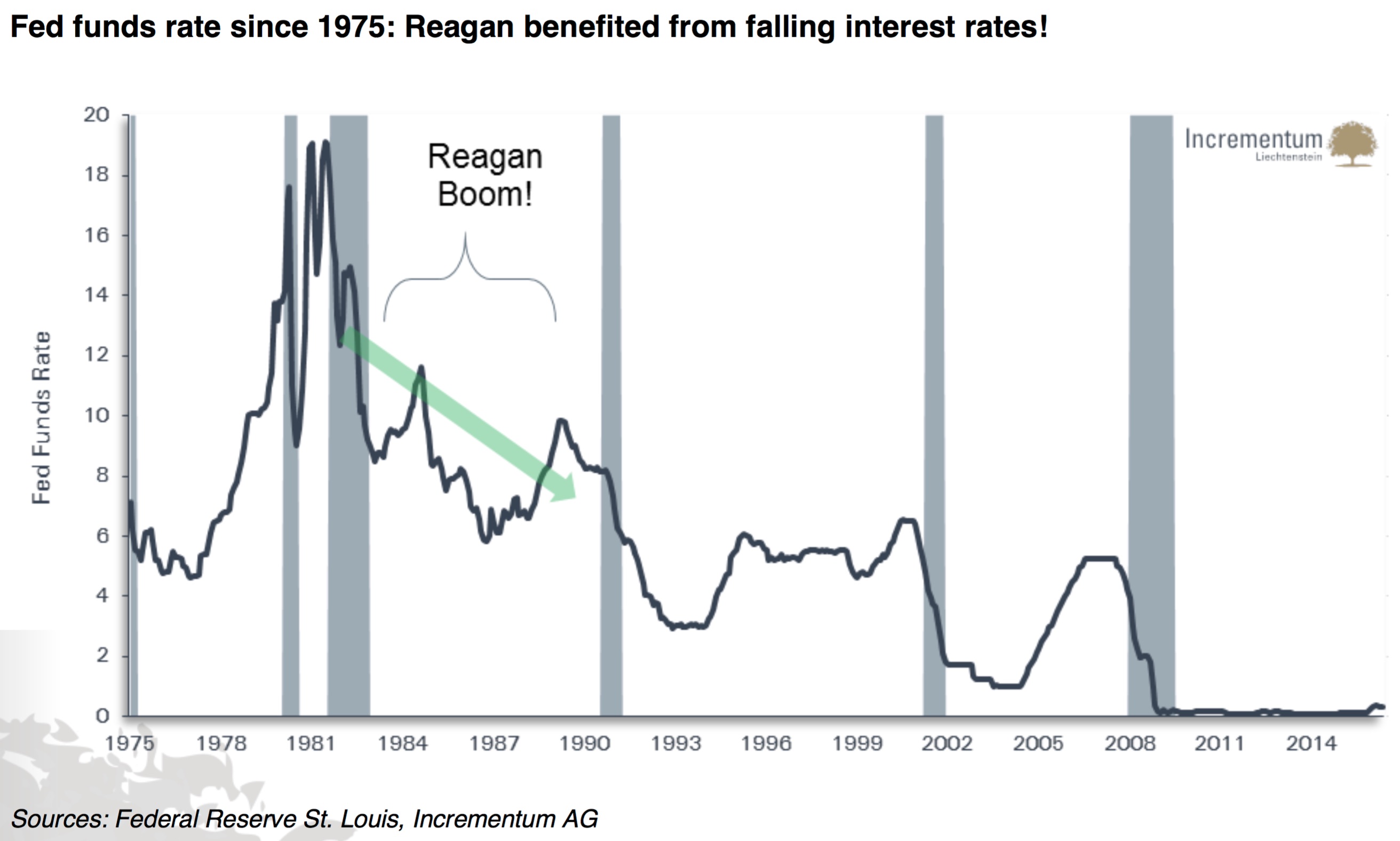 To sum it up, the comparison of the imminent Trump era with the premises prevalent under President Reagan does not hold. The economic upswing under Reagan from 1982 to 1989 was the strongest boom in the history of the United States. However, it occurred in an environment of falling interest rates and inflation rates, which provided an enormous tail wind. At the outset of Reagan’s term, two severe recessions occurred and had cleansed the system.

At the moment, interest rates and inflation are at respective lows, but at the long end of the curve we are witnessing an interest rate reversal: if this trend were to hold, it could badly affect companies in the emerging markets or in the Eurozone that depend on low interest rates or a cheap US dollar. This in turn could directly translate into a setback on the financial markets and in the US economy. We are caught in a zero interest rate trap. Our optimism about Trump changing course sustainably without a cleansing recession happening before is very limited indeed.