On the heels of chaos igniting in the Middle East, today James Turk spoke with King World News about the Iranian trigger and why 2020 will be a momentous year for gold and silver.

Even Bears Now See Gold Is In A Bull Market
January 6 (King World News) – James Turk:  “It is now more than four years, Eric, since gold made its low in December 2015. Prices have been trending upward since then. It’s not been a straight line of course; it never is. But even perennial bears are now starting to accept that gold is in a bull market…

Old-timers who have been around for while are fond of saying that there is no bull market like a gold bull market.  Anyone who experienced the 1970s – like me – knows that adage rings true. So does anyone living in Venezuela today who looks at the gold price in terms of their currency.

The Iranian Trigger
Currency debasement – or currency destruction in the case of Venezuela and dozens of other countries – means higher gold prices. The Iranian situation is just the trigger causing this latest jump in the gold price. And when people seek protection of their wealth from geopolitical events, they don’t want paper gold, they want the real thing – physical metal.

So the recent jump in demand for physical gold has highlighted the existing hair-trigger imbalance between paper gold and physical gold. It caused an upward explosion in the gold price.

The question now is whether the central planners, intent on keeping gold from rising toward its fair value, have lost control. It’s too early to say, but the following chart presents an interesting picture. 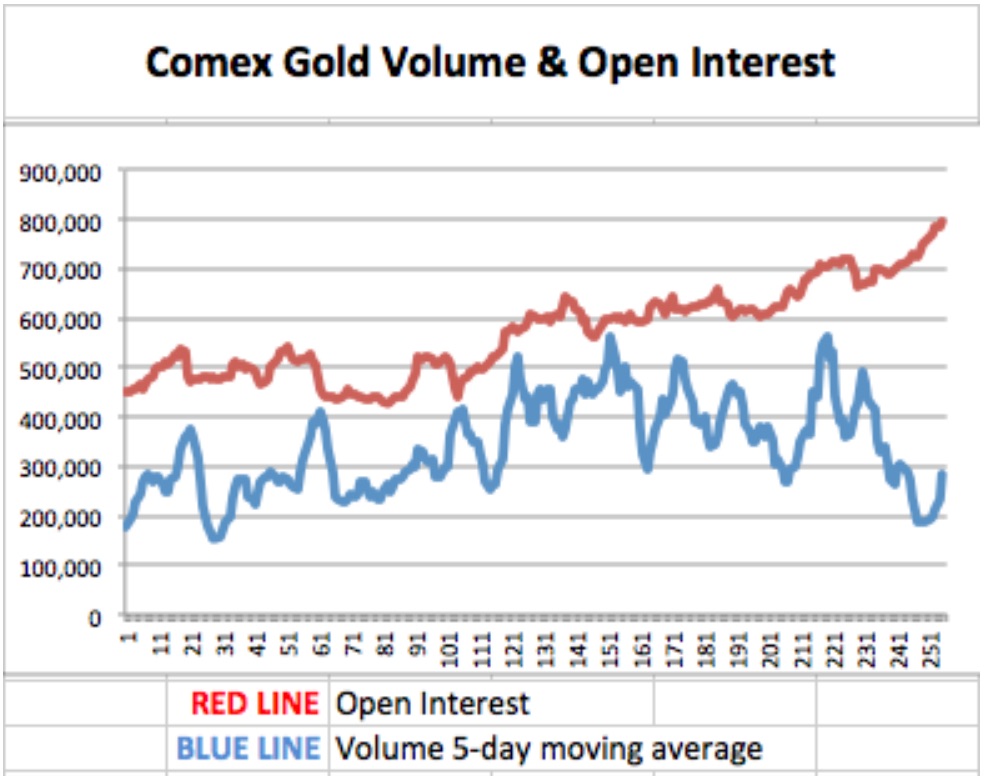 Volume then began to fall while open interest continued to grow. It is interesting to think about the reasons that could have caused this unusual pattern. For example, traders may simply be abandoning futures and buying physical metal instead, which in fact is what everybody should be doing. But it does make clear that we have a “whale vs whale” situation.

We have die-hard paper longs taking on die-hard paper shorts. The longs are probably knowledgeable traders with deep pockets, like hedge funds. The shorts of course are the central planners. Only governments would be foolhardy enough to incur huge losses as gold rises. And these losses are indeed huge. Consider this: At gold’s low point in December 2015, open interest was 391,000 contracts. As of Friday it was 797,000 contracts. The 406,000 contract increase represents 40.6 million ounces of gold.

2020 – A Momentous Year For Gold & Silver
Since December 2015 gold has risen $510, or $255 on average. Multiplied by 40.6 million ounces means that the shorts have lost $10.3 billion over this period. Who can take losses like that other than governments with their mindless interventions? Eventually the central planners will throw in the towel just like they did back in March 1968 when their cartel was called the London Gold Pool. The bottom line, Eric, is that 2020 looks like it will be a momentous year for gold and silver.”

Forget The Mainstream Propaganda, We’re In A Full-Blown Global Depression And It’s Scary