One thing is certain, we are in for a wild ride in global markets and gold in 2022, plus a look at Putin the chess master.

The Fed’s REAL Mandate
As expected, the Fed is an essential starting theme in any conversation of this nature.

But for those who understand even the most rudimentary (and sordid) history of central bank origins and operations, its real mandate is serving (controlling?) the banking and market masters from which it was not-so-immaculately conceived on Jekyll Island…

Critical to this rigged-to-fail charade is the Fed’s artificial manipulation of otherwise natural supply and demand forces with regard to Uncle Sam’s increasingly unloved IOU’s—aka: U.S. Treasuries.

Stated simply: There is far more supply than there is demand for American promises…

Filling the Gap with Artificial Zeros & The Taper’s Hard Math
To fill this gap, the Fed desperately adds zeros to its balance sheet (QE) to purchase these increasingly unpopular credits.

Of course, any meaningful taper of this “gap financing” (i.e., Fed accommodation) would create what Powell euphemistically described in December as a “market dysfunction,” the occurrence of which would violate the Fed’s unofficial yet openly obvious (and primary) mandate of propping stocks not citizens.

The mathematical syllogism behind such a potential “market dysfunction” is algebraically quite simple, namely:

…and for nations and corporations hitherto living exclusively off cheap debt, such higher debt costs = a severe “uh-oh” moment in the risk asset bubbles (stocks, bonds and real estate) which the financial world has confused with an “economic recovery.”

A Cynical Revisit of the Fed Conundrum: Just Follow the (Desperate) Self-Interest
Based on such domino effects, the Fed now finds itself in a pickle.

If it tapers, rates rise and asset bubbles tank, which is bad for the markets which the Fed so loyally serves.

However, if the Fed doesn’t taper, inflation continues its steady rise, which is bad for everyone else.

Given such options, the choice for the always self-serving, public-ignoring and market-supporting Fed would seem to be against a taper, no?

The 2022 Taper: Having Their Cake and Eating It Too
As we’ve argued in various articles and interviews, we feel that the much-telegraphed 2022 taper will be short-lived, publicly hawkish yet ultimately dovish.

Optically, of course, Powell needs to look tough on inflation in the same way certain politicians like to appear a tough on crime (despite a reality in which both inflation and crime keep rising).

A 2022 taper gives the Fed the chest-puffing surface shine of seeking to combat inflation by reducing its balance sheet and allowing rates to rise in a comically pseudo, Volker-like manner.

But as Wall Street already knows, the Fed will quietly keep feeding the bond market its needed liquidity via trillions of Standing Repo Facility and FIMA swap line support.

Former Fed Vice Chair, Stan Fisher, by the way, effectively foreshadowed this scenario in August of 2019, confessing that once any nation’s debt to GDP ratio hits 130%, its only options are: 1) sustained periods of inflation to inflate away its debt, or 2) a deep restructuring of its debt.

This just means that in either scenario, bond-holders get crushed in either real or nominal terms, something almost impossible for investors (or the media) to imagine on the tails of a 40-year bull market for bonds.

This, again, is bad for the real world but good for the policy makers.

That is, the Fed gets to have its cake (tough-guy taper talk) and eat it too (by inflating away debt)…

Smoke & Mirrors vs. Central Bank Realism
The reality, rather than optics of such central bank realpolitik explains why even the most hawkish talk from Powell pre-Christmas saw a positive rather than negative market reaction—especially from industrial equities, commodities, gold and BTC.

When the much anticipated “taper” does kick-in, small caps, growth stocks, tech names and other risk asset “speed boats” will likely flounder in the coming market turbulence, which will likely create the kind of panic to necessitate a rapid course reversal on the taper, as we’ve seen many times in the past (i.e., early 2019).

With so much smoke and mirrors in play, the next few months should therefore be interesting as we watch market reality collide with central bank fantasy.

Fantasy vs. Facts
As for fantasy, many investors (and the media pipers who guide them) simply refuse to consider that American exceptionalism (from Afghanistan to twin-deficits, external financing and unpayable entitlements) just aint that exceptional anymore…

As I argued recently, the harsh reality of these mathematical facts makes the U.S. more reminiscent of Weimar Germany than that debt-to-GDP monster otherwise known as Japan.

This, however, doesn’t mean wheel barrels of money and hyper-inflation are around the American corner.

The World Reserve U.S. currency of 2022 is not the Deutschmark of 1923 Germany; nevertheless, the directional similarities are impossible to ignore for those not burying their heads in the comfortable sands of cognitive dissonance or an otherwise “cancelled” history.

Unless US policy makers miraculously achieve magical productivity growth (in a locked-down world?) or get honest about the need for the kind of severe spending cuts which kill their re-electability (good luck), the coming years will see the harsh consequences of the “strongest economy in the world’s” fiscal sins.

Groans from the EU
In all fairness to Uncle Sam, his first and second cousins in the EU are also feeling (as I am feeling in my oil bill in France) the pre-recessionary (as well as inflationary) pinch of an energy crisis, as oil and gas prices mount in the backdrop of headline-making forecasts of output declines out of Saudi.

Natural gas benchmarks on the European side of the Atlantic closed at record high settlement prices heading into Christmas.

Putin the Chess Master
Meanwhile, as the West plays checkers with lockdowns, mandates, central bank optics, climate change virtue/fear-signaling and moral concern (?) for the Ukraine, Russia’s Mr. Putin is playing Chess while media darlings in the US condescendingly compare Russian GDP to that of one or two American states.

But what the West is ignoring, as always, is the painful yet patient long-game–something Putin in particular, and Russia in general, know all too well.

Putin’s Russia, for example, has lots of oil and far less foreign debt than his smug detractors in DC and elsewhere.

Equally worth noting, and not surprising to us, is that Russia is also playing the long game in physical gold.

Just one year ago, the following chart confirmed that its nearly $600B in FX reserves hold more gold than U.S. Dollars. 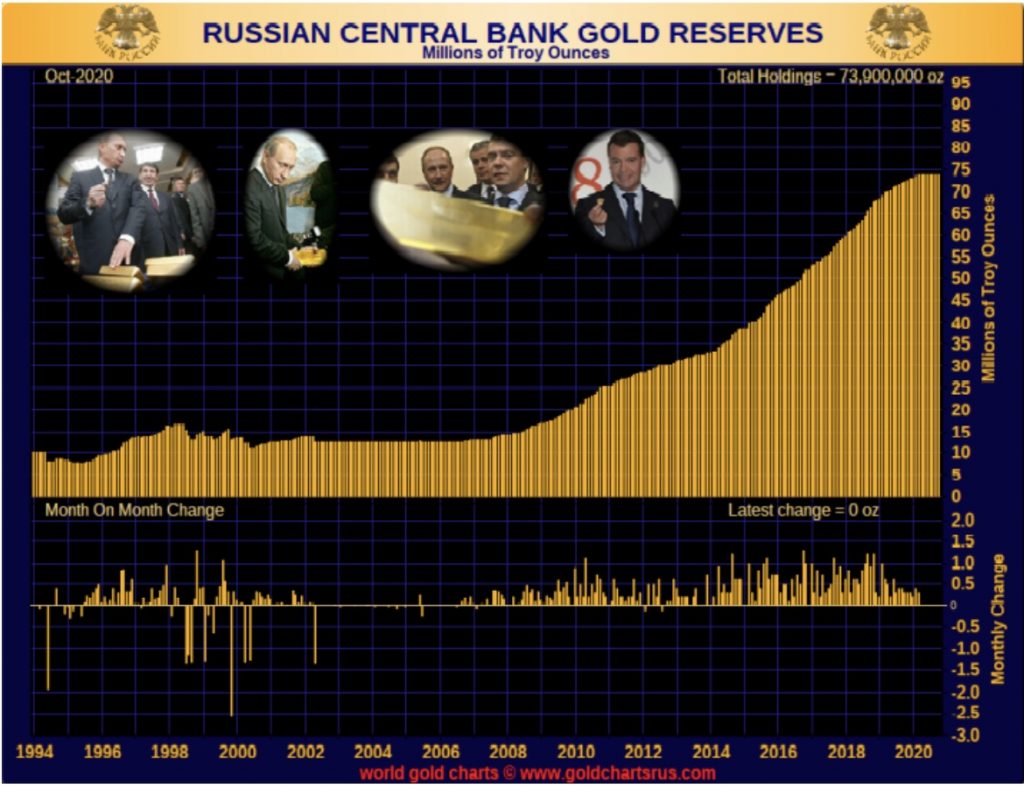 Why the rising love for this long-game precious metal from a long-game political and economic player like Putin?

Whatever one can say or think of Putin (and there’s a lot…), perhaps this reputed chess player knows more about real debt, energy demand and real money than Powell?

Perhaps that U.S. Dollar just aint what it used to be, and perhaps Putin sees the longer play?

In such a global chess match, I already know who would win, and when it comes to gold vs. the USD, the checkmate is already obvious. 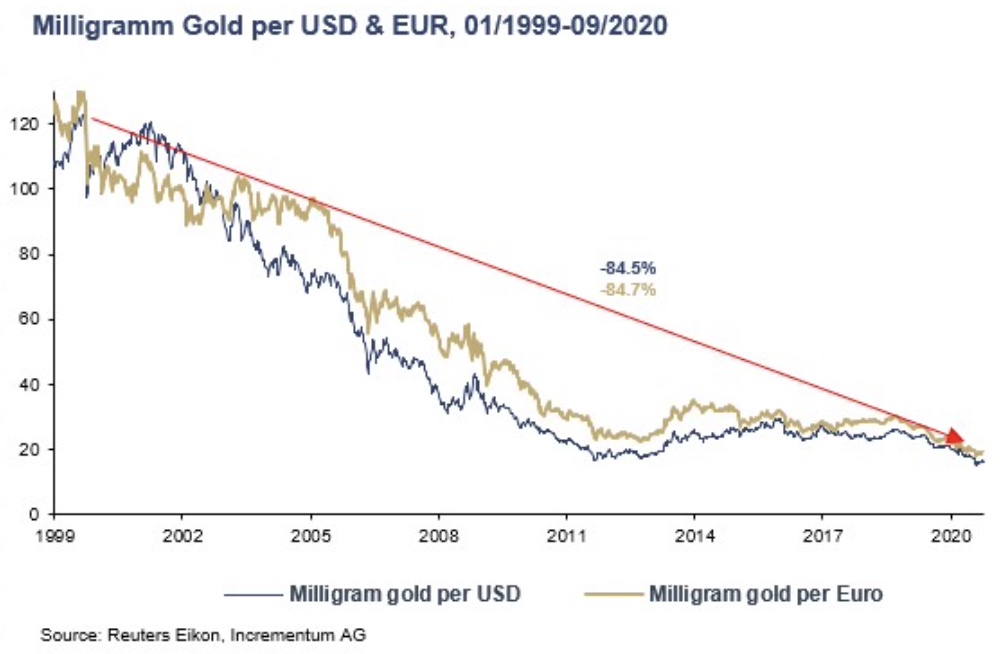 This will link you directly to more fantastic articles from Egon von Greyerz and Matt Piepenburg CLICK HERE.

To listen to Matthew Piepenburg discuss why gold is set up for huge upside gains in 2022 as well as what other major surprises to expect next year CLICK HERE OR ON THE IMAGE BELOW.

To listen to Alasdair Macleod discuss why silver and gold are set up for huge upside gains in 2022 CLICK HERE OR ON THE IMAGE BELOW.