Why The 1970s Gold Bull Mirrors Today’s
By Ronald-Peter Stoeferle, Incrementum AG Liechtenstein
June 2 (King World News) – Since 15 August 1971, i.e. the beginning of the new monetary age, the annualized increase in the price of gold has been 8%. The real appreciation of gold relative to the US dollar averages 4.5% per year. The following chart shows annual average gold prices in USD since 1971, and puts the recent gold price correction into a long-term perspective. It clearly illustrates the benefit of a regular accumulation of gold (“gold savings plan”) as a long-term strategy, which takes advantage of the cost average effect of regular acquisitions. 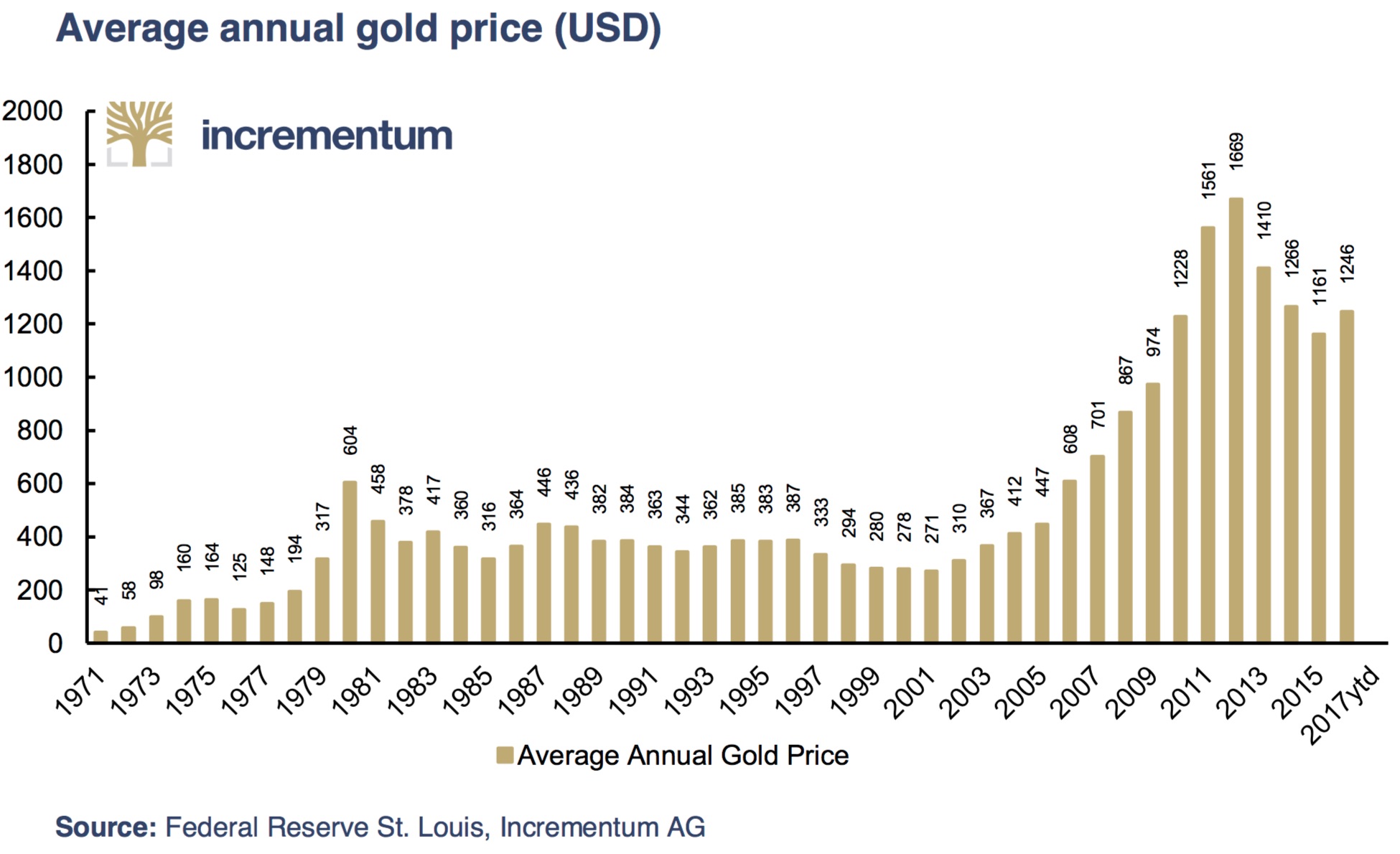 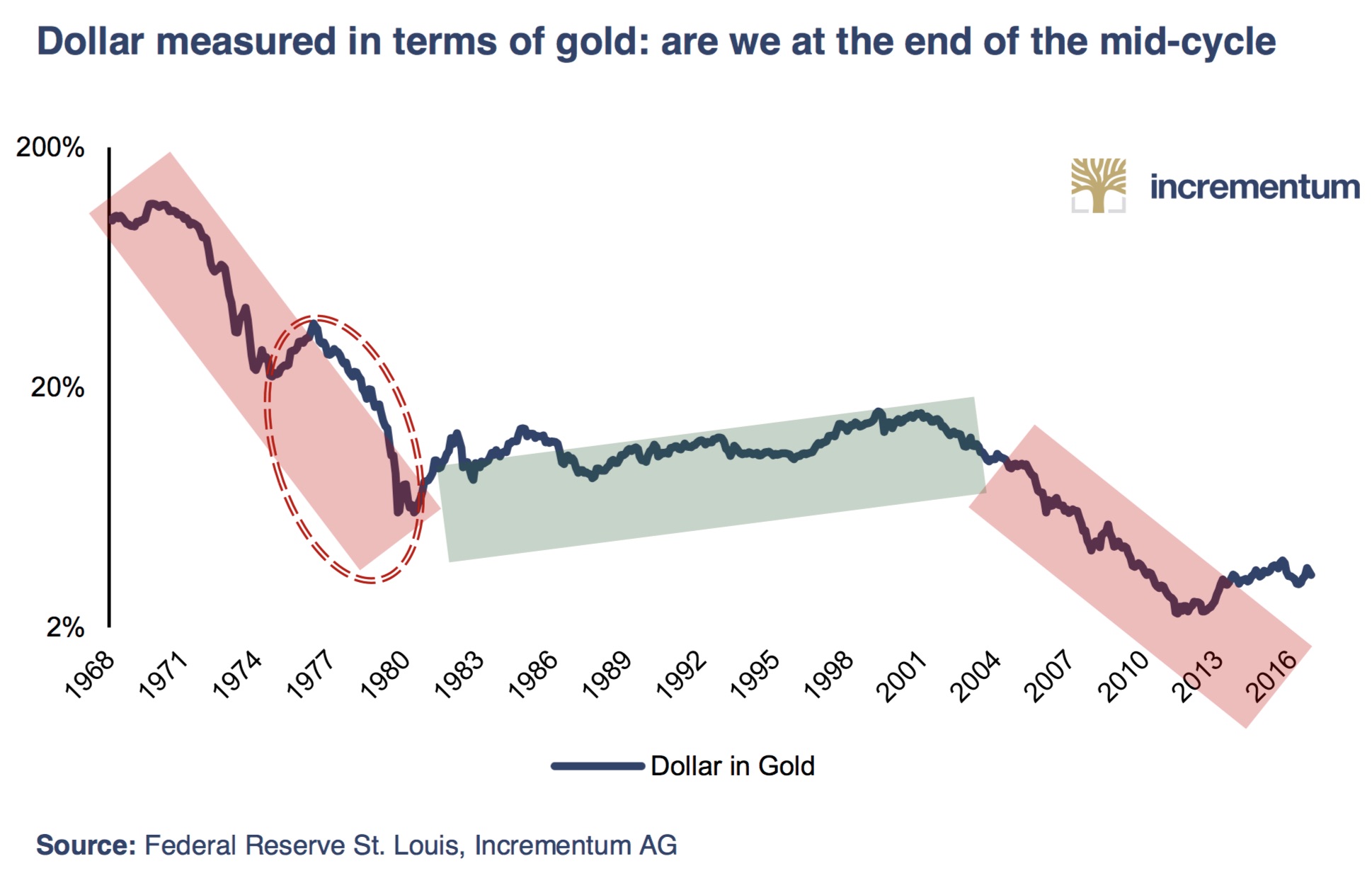 The Similarities Are Striking Between 1970s Gold Bull vs Today
The chart illustrates the fact that the current depreciation phase has been very moderate in comparison with the 1970s. The final trend acceleration that we can see in the 1970s (as marked by a circle in the chart) has not happened yet. In terms of timeline, the short-term dollar strength reminds us of the prior period around the middle of the 1970s, when gold was being sold off and the US dollar appreciated significantly within the context of two years of disinflation coupled with a weak economic improvement. From our point of view, the similarities to this mid-cycle correction are striking…

The following chart also confirms the similarities between the 1970s and the status quo. The analysis reveals the fact that the bear market since 2011 has been following largely the same structure and depth as the mid-cycle correction from 1974 to 1976. However, we can see that the duration of both corrections diverges significantly. 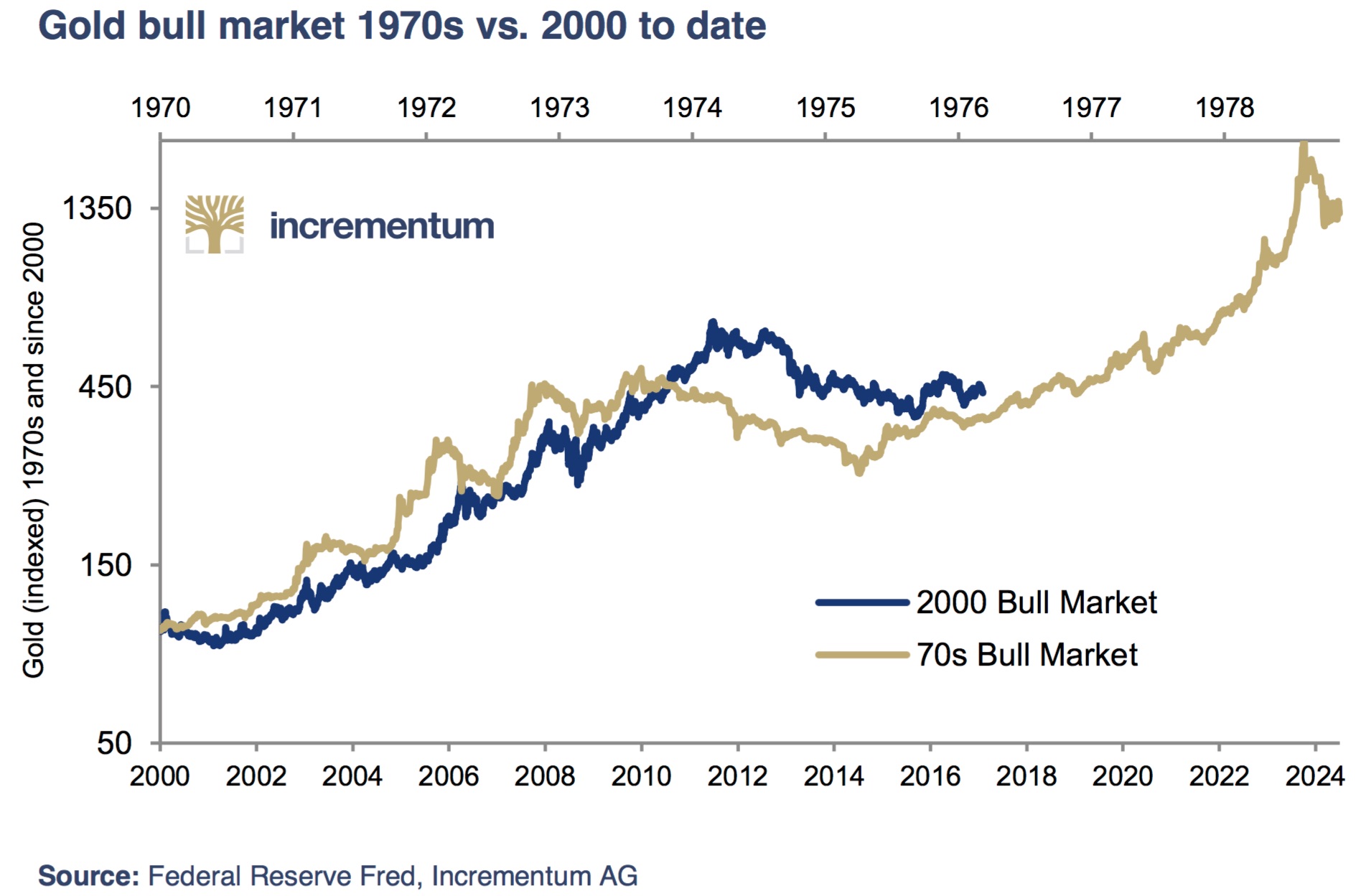 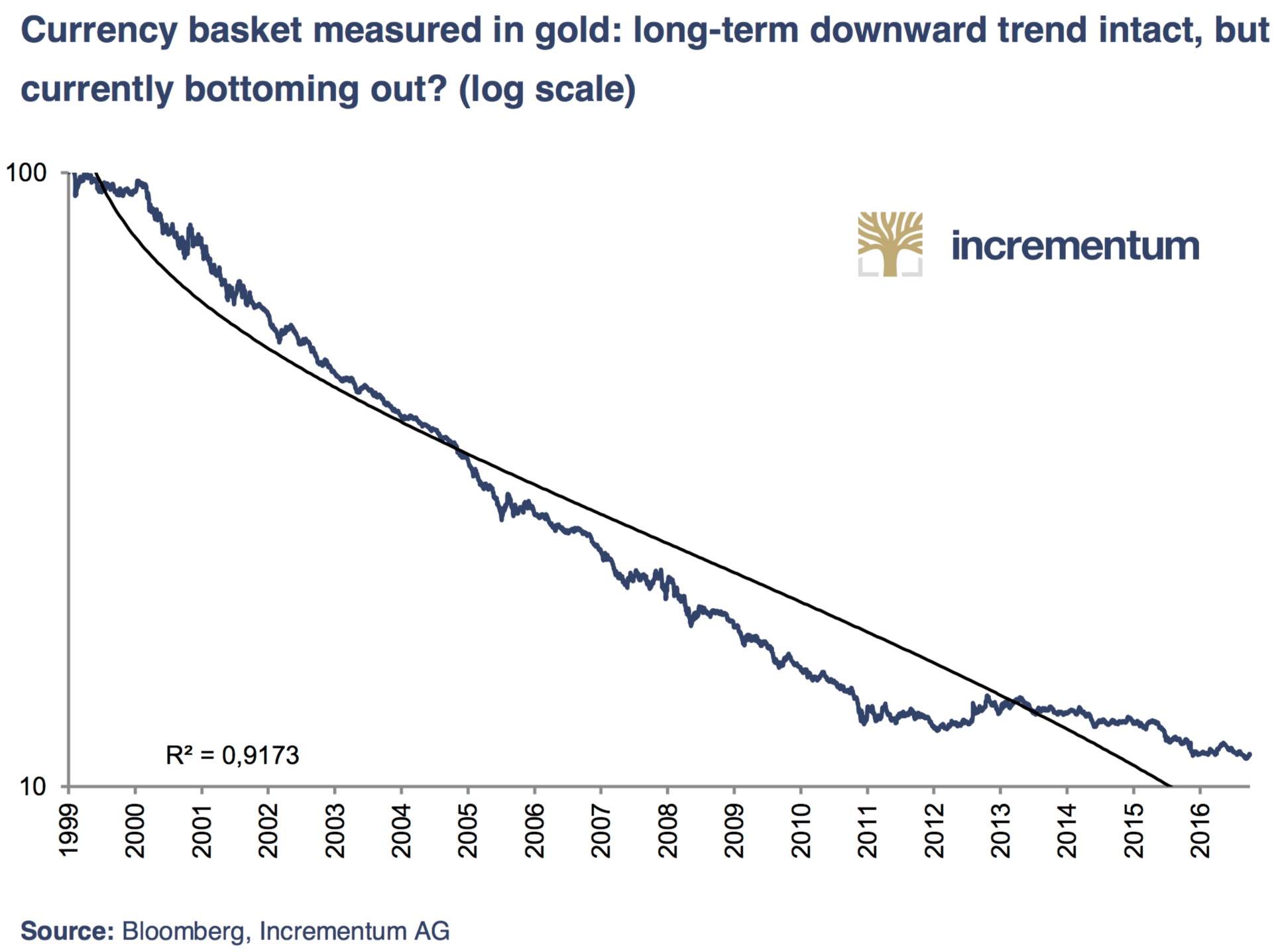 We can conclude that the gold price rises in the long run both in dollar terms and, more significantly so, in terms of an international currency basket. Vice versa, the purchase power of paper money in gold is on the decline, which is even more obvious regarding the basket than in terms of the globally leading currency, the US dollar. 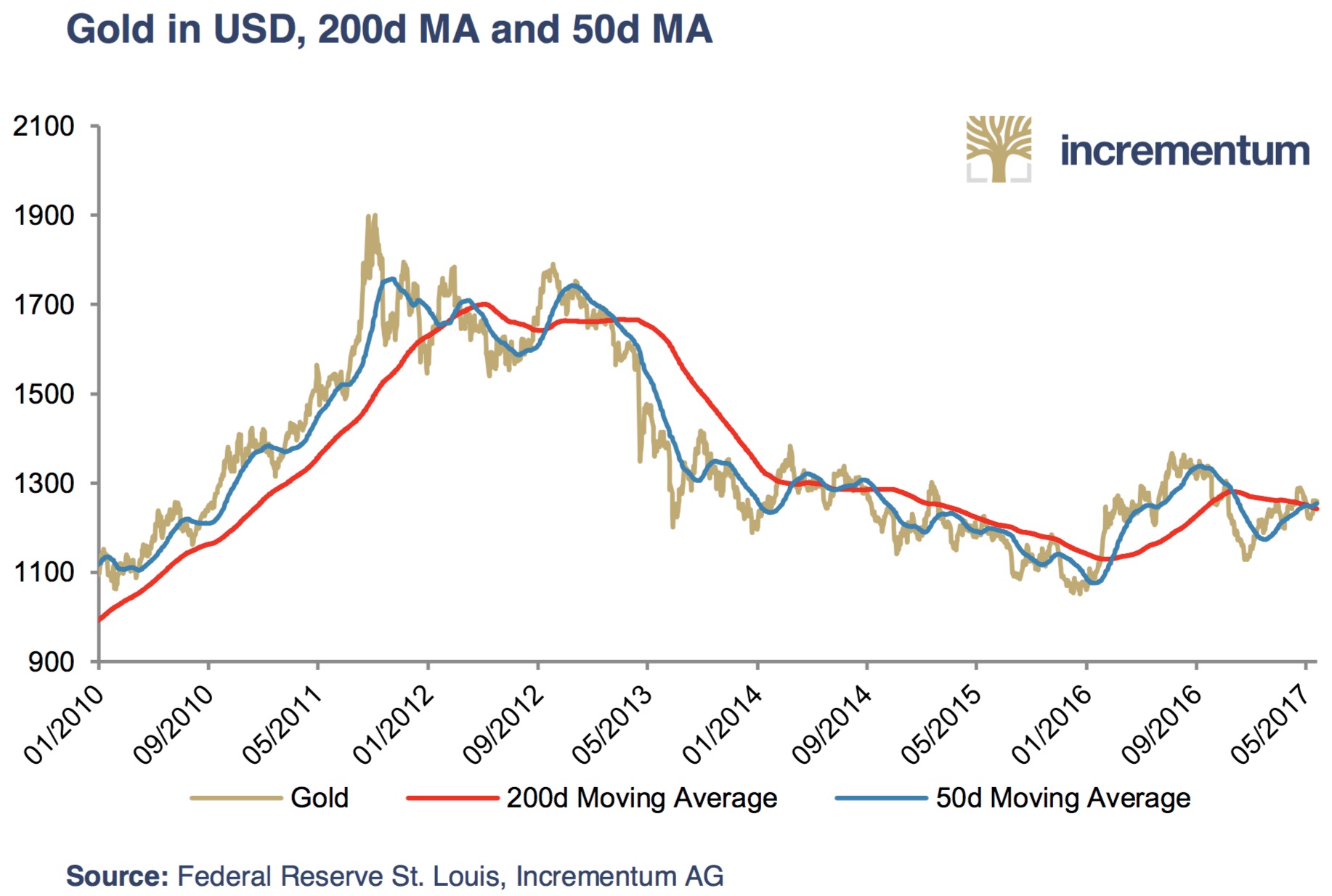