End Of The Gold Mid-Cycle Correction
August 3 (King World News) – Paul Wong, Market Strategist at Sprott Asset Management:  Gold bullion regained some ground in July, climbing 2.49% for the month. Gold, however, remains underwater at -4.43% YTD through July 31, 2021. Gold mining equities also rebounded in July, up 3.33%, but are down 3.70% YTD as of July 31. Silver lost ground in July (-2.43%) and is down 3.45% YTD.  We view 2021’s weak performance as a mid-cycle correction for precious metals, which we explain in greater detail in this month’s report. 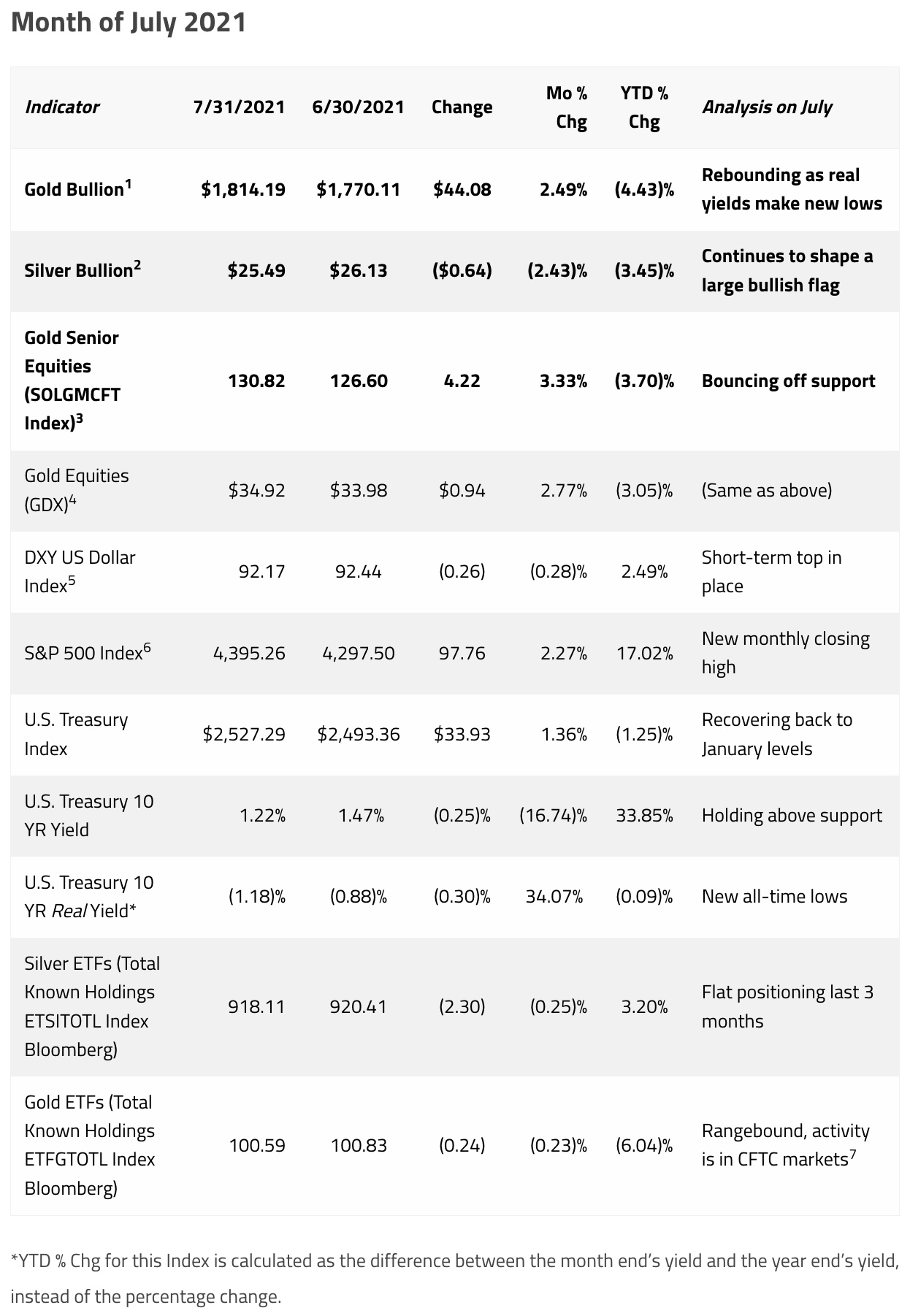 During July, spot gold rose $44.08 per ounce (2.49%) to close the month at $1,814.19. We believe the June smackdown on gold was more likely due to an across-the-board fund de-grossing event than any fundamental gold driver. July saw a recovery in gold bullion investments as positions were repurchased and the fall in real yields to all-time lows added to the buying rationale. With new all-time lows in real yields, the U.S. dollar (USD) topping out, positioning still light and tapering/tightening fears waning, we believe that gold is well-positioned for the typical August-September rally.

After the surprising June Federal Open Market Committee (FOMC) hawkish reaction, the Federal Reserve (“Fed”) messaged a more consistent statement that the market received as dovish. Real yields fell to an all-time low, as shown in Figure 1, as the market appeared to be pricing in a peak rate of change (but not peak levels) in seemingly everything (growth, profits, stimulus, gross domestic product [GDP], etc.).

The recent surge in the COVID-19 Delta variant has recently raised the specter of a return to shutdowns and a possible hit to the economy. The USD has also put in a short-term top in July. The long-term picture on the USD remains bearish with a large top in progress but not triggered yet. Recent price action continues to reflect more short covering dynamics than a new USD bull market. Nominal yields continued to retrace back to early Q1 levels before the surge. June month-end saw a sharp positioning squeeze resulting in the yield curve flattening. Significant short positions in U.S. Treasury shorts were squeezed, pressing yields lower. Falling yields, in turn, reinforced the “peak everything” narrative. 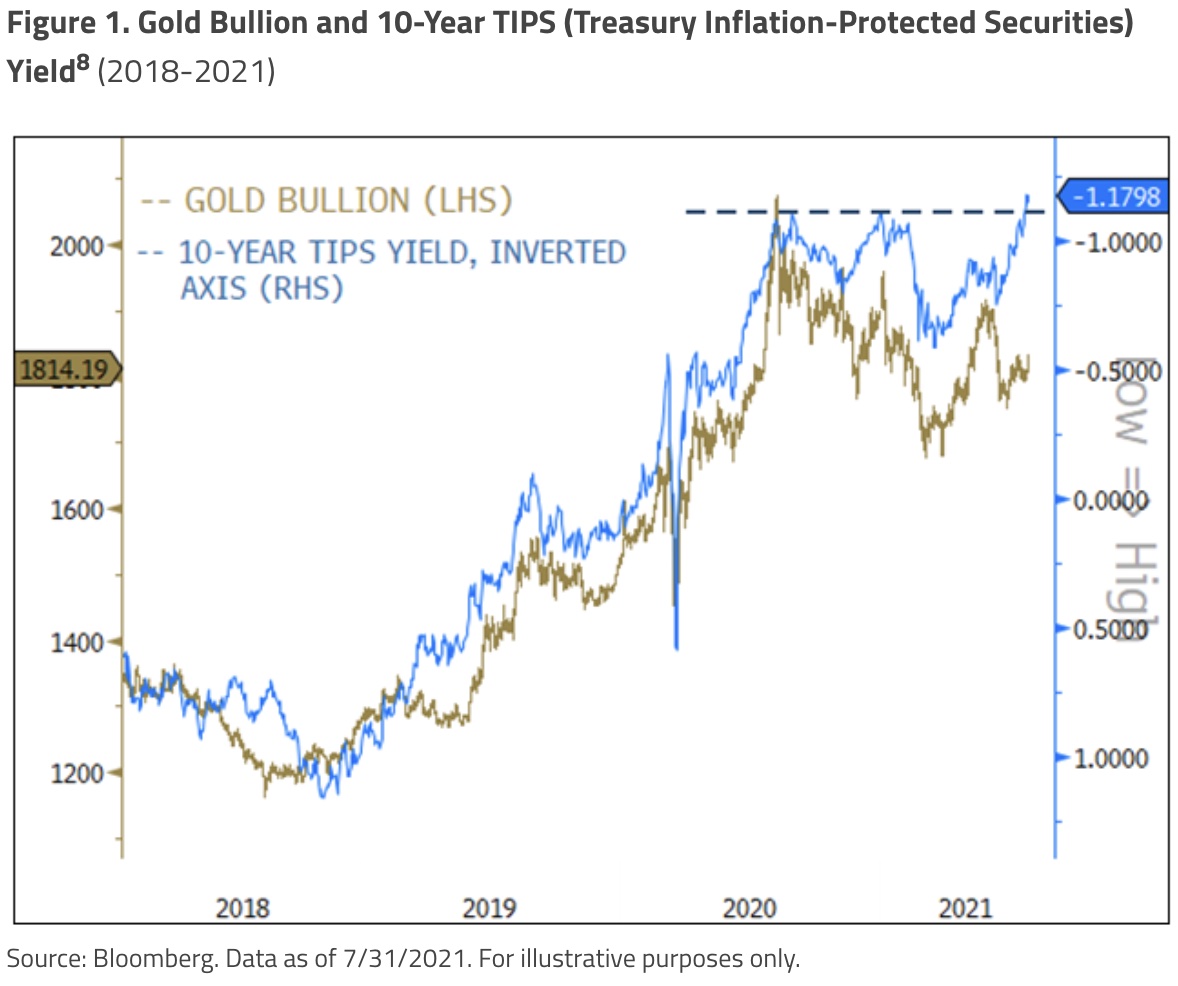 Real Yields Continue to Fall
Since the last low in real yields back in August 2020, in just one year the market has gyrated from deflation, reflation, inflation, and tapering to tightening. The one constant has been the grinding down of real yields by the Fed’s actions and policies (financial repression) throughout the past year. The 10-year TIPS yields (real yields) broke to all-time lows in July even as the U.S. economy continued to expand at one of the fastest rates in decades. Market expectations were that real yields would rise as the Fed would eventually taper and tighten into a robust economic recovery. The sharp sell-off in gold bullion in Q1 was a reaction to this tapering and tightening fear, a replay of the 2013 Taper Tantrum beating of gold bullion.

Figure 2 is a weekly chart of the 10-year TIPS yield since the global financial crisis (GFC). We marked the price action of the 2013 Taper Tantrum effects on the TIPS yield. Back in 2013, there was a near 200 basis-points ramp up in real yields. In early May 2013, the breakout was triggered on the 10-year TIPS yield, and the shocking rate of change wiped $200 per ounce off the gold price in a little more than a week. Up to that point, the market had not discounted the Fed’s message of tapering and tightening. The USD had already made its low in 2011 after a decade in one of the worst USD bear markets. By 2013, the USD was in a choppy bottoming process. The red lines, bottom right, in Figure 2 shows a clear technical breakdown of real yields. Typically, the Fed will provide more precise guidance either at its upcoming Jackson Hole, Wyoming, meeting (August 26-28) or the September FOMC meeting, and we may be able to fine-tune the projection targets a little better. 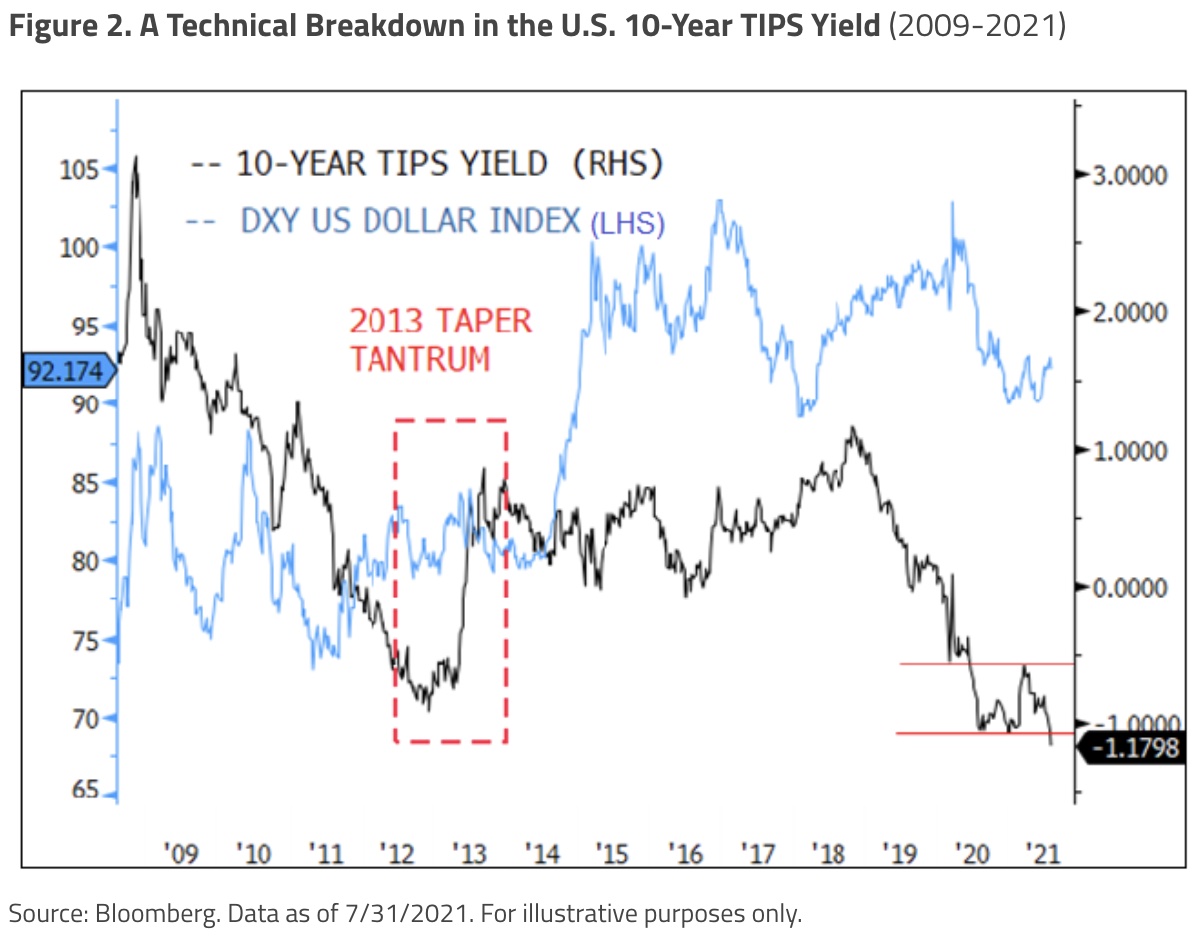 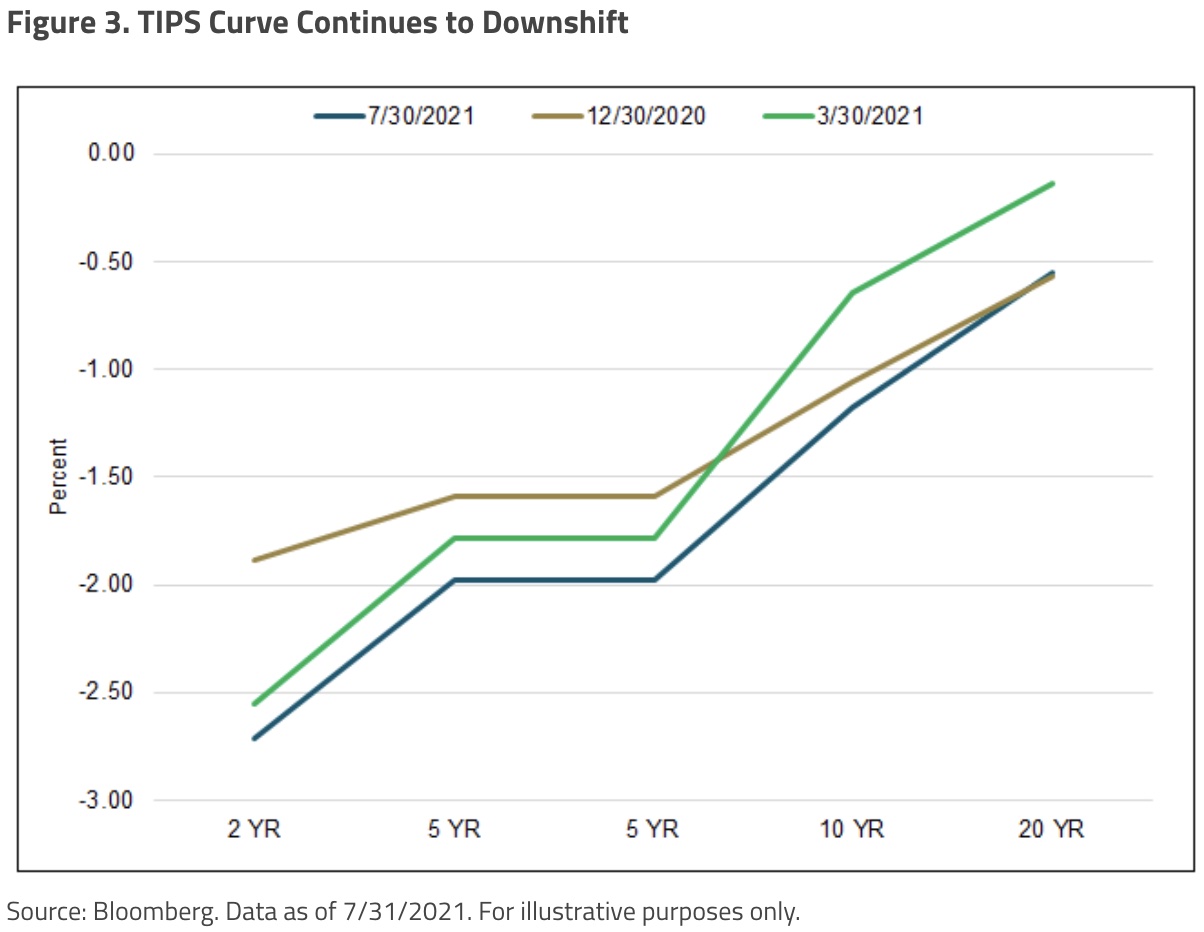 As a reminder, the 2013 Taper Tantrum was Fed-driven. Today’s “taper tantrum” is bond market-driven. The Fed has a printing press (quantitative easing [QE] program of $120 billion per month) and it can crush the bond market any time it wishes. The days of “bond vigilantes” have been relegated to history in a QE world. Market measures sensitive to Fed tapering/tightening intentions such as the 2-year Treasury yield, the 2Y2Y inflation swap and Eurodollar futures continue to indicate an uncertain view of Fed tapering/tightening intentions. Gold price action has started to reflect this view as well, and we are likely past the extreme tapering/tightening fears displayed in Q1. The Fed will probably move to a tapering stance by year-end, but the overblown extreme tightening fears that dominated Q1 are no longer a plausible course.

DXY Index Indicates Opposite of 2013 Tantrum
When one hears the term “Fed tapering/tightening,” the reflex action or muscle memory is the painful 2013 experience. Figure 2 shows how TIPS yields are nowhere close to repeating the 2013 action. The long-term DXY chart also indicates a non-2013 pattern as well. During the last gold bull cycle, the USD bear market was a primary driver of the 2001 to 2011 gold bull market for a decade. From the peak in July 2001 to the trough in March 2008, the DXY fell 40%, one of the worst bear markets on record. A few years before the August 2011 gold peak, the DXY started carving out a basing pattern. Today’s DXY pattern is a large pending double-top formation after a relatively tepid 13-year long bull run since the GFC. The March 2020 USD squeeze lesson is clear; no central bank (least of all the Fed) wants a significantly stronger USD. A USD funding squeeze would wreak havoc on global flows and economic expansion. 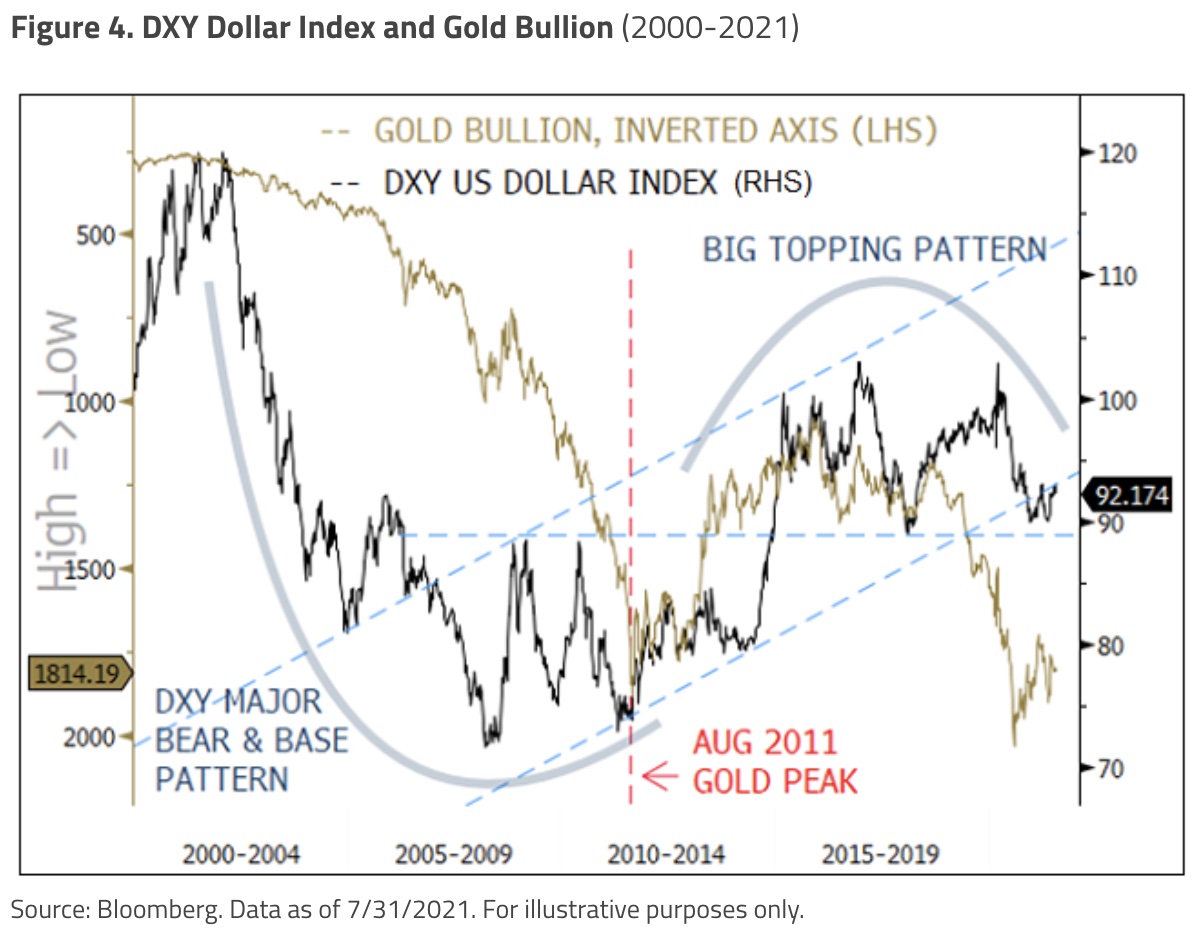 Recapping Today vs. 2013: A Different Type of Tantrum
The Fed initiated the 2013 Taper Tantrum. The bond market at the time dismissed the initial Fed signals only to reverse course and reprice aggressively. As a result, real yields exploded higher, rising almost 200 basis points. The DXY had a bullish breakout after a decade-long major bear market. At the time, the Fed appeared to be on its way to a “normalization path.”

In this current cycle, the bond market has initiated the taper tantrum, although the Fed continues to message patience. Real yields continue to make new all-time lows. The DXY is in a multi-year topping pattern after a choppy recovery from its GFC low. The Fed is now on an AIT/ZIRP (average inflation targeting/zero interest rate policy) path, which essentially translates to a dollar debasement and financial repression path. Aside from the phrase “taper tantrum,” market conditions are near the opposite of the 2013 Taper Tantrum. Yes, the Fed may begin the taper process in early 2022, but it will not be anywhere close to the 2013 experience…

A Mid-Cycle Gold Correction: We See Gold Breaking to New Highs
Gold bullion remains below its 2020 August highs ($2,067 on August 7, 2020) but well supported above the March 2020 lows. If this is not a cycle peak (it’s not), we are most likely in the latter stages of a mid-cycle gold correction. During the 2001 to 2011 gold bull market, there were two significant mid-cycle corrections that lasted over a year (2006 and 2008).

We would expect gold bullion to shape a base breakout pattern to new highs in time. We are convinced the correction lows on gold this past March will hold as they were made on capitulation selling on overblown Fed tightening fears. With new lows in real yields and the DXY unable to break higher (only short-covering buying), we see gold breaking to new highs. If history repeats, we believe the approximate timing will be early 2022. In Figure 6, we repeat the exercise for the gold mining equities, and we see a similar pattern. In Figure 7, silver shows a much stronger response in this cycle and is yet another technical element of strength.