As the world edges closer to the next crisis, today the man who has become legendary for his predictions on QE and historic moves in currencies told King World News that we are going to see a panic into the gold market.

Gold & Silver Breakout Has Now Started
June 9 (King World News) – Egon von Greyerz:  “The breakout in gold and silver that we have been patiently waiting for is now starting. The long term up move in the precious metals, which has been pausing since 2011, is now resuming. We can with confidence expect all the short term resistance levels to be broken. The first obstacle is the Gold Maginot Line at $1,350. This 6 year resistance is certain to be broken within a short while. It has already been broken in most currencies, so gold in dollars is not going to hold out much longer. Next target for gold is above $1,600 and for silver (at least) $25. When the real move starts, silver will lead the way, which means that the gold/silver ratio will fall rapidly from the current 89 level…

At the beginning of this century, we judged that risk in the financial system was becoming too elevated for comfort. We thus came to the conclusion that there would be serious problems in the system, leading to money printing and currency debasement, and that wealth protection would be critical. Which asset to use for insurance against these risks was an easy choice since physical gold is the only money that has ever survived in history and is no one else’s liability. Although the first serious problem started in 2006, the gold price was already giving clear indications of problems in the financial system in 2002, and this is actually when the real move up in gold started.

So let us look at how gold has performed from 2002 – 2018 in three major currencies, namely the US Dollar, British Pound, and the Euro:

The first remarkable observation is that from 2002 to 2012, Gold in Dollars did not have one single loss year. The average annual gain for gold in that period was 20%. The six year correction from 2013-18 has been both long and significant. But we must remember that the long term bull market in gold started in 1971 at $35. And the latest uptrend in gold began in 2000 at $250. So a significant correction is part of climbing the ladder of worry.

If we look at the whole period from 2002-18, Gold in Dollars and Pounds has, in spite of a major correction, gained a very respectable annual 12% on average and also outperformed the Dow Jones and all global stock markets. Gold in Euros returned an average of 14% from 2002-12 and 9% in 2002-18. Interestingly, Gold in Euros had a significant correction (31%) in only one year, which was 2013. That was also the year that Gold In Euros bottomed.

Gold has also outperformed all stock markets since 2002 (even more so since 2000). The Dow, for example, (excl. dividends) has lost 46% against Gold since 2002. If we compare the return on Gold to interest rates, it is far superior. Dollar rates crashed from 2007 and were at zero percent between 2008 and 2015. Euro rates are still negative up to 12 years’ maturity, which is quite remarkable. Between 2002 and 2018, interest rates averaged between 2.5% and 0% depending on the currency. With gold returning 9% in Euros annually and 12% in Dollars and Pounds in the same period, it has clearly outperformed the return on Fiat money.

So the conclusion is straightforward. Whether we take 2002 as a start year, since that is when our company decided to invest significant amounts in physical gold, or we take the whole of this century, Gold in all currencies has outperformed all major asset classes (and naturally Fiat money).

Aurum non gratum – Gold not welcome
So why is gold not acceptable to Western investors, Governments, or Central Banks. Western Gold Reserves have been reduced significantly in the last few decades. It would be surprising if there are even half of the 23,000 tonnes of official gold holdings left in Western vaults. Most of the gold has been covertly sold or leased to the market and bought by China, India and Russia. All Central Banks hold is a worthless IOU from a Bullion Bank that they are owed gold. The Bullion Banks can of course never get hold of the physical gold to honor the IOU.

Gold is the best kept investment secret in this century. It is such a well kept secret that less than 0.1% of investors have participated in the ascent of gold since 2000. As a company, we entered the gold market at the beginning of 2002 when gold was $300 an ounce. Our analysis at the time was that gold was an asset which was unloved and oversold at the same time that risk in the world was increasing rapidly.

It was such an easy risk analysis and investment decision, which makes it totally surprising that so few in the West saw it. At the same time as the West was selling gold, the East started to accumulate major amounts. The chart below show the Folly of the West versus the Wisdom of the East. 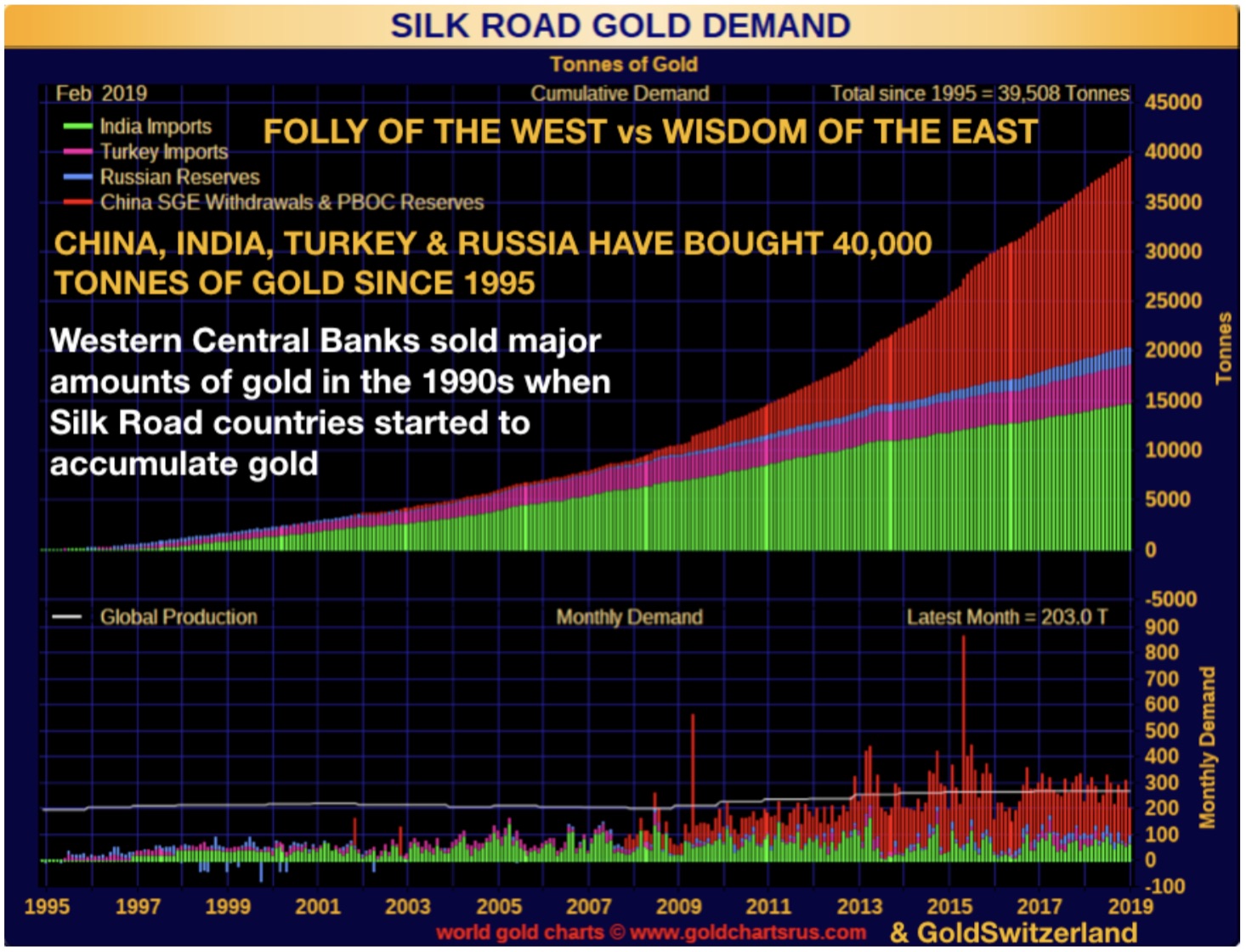 The Western economy and financial system is based on greed and unsound principles. When you run out of money, you just print more and expand credit. You would have thought that Governments and Bankers are really stupid as they can’t see the virtues of sound money and gold.

But we know that it is not stupidity that leads the Powers That Be to ignore gold and print money. They know what they are doing. They have created a system that makes the rich significantly richer every year. Let’s just take the Forbes World list of billionaires. This list was first started in 1987:

So the financial system designed by the elite has served them perfectly. The unlimited money printing and credit creation in the world since Nixon closed the gold window in 1971 have led to a small elite getting a bigger and bigger piece of the pie.

There is of course one major problem that they are not prepared for. The coming implosion of asset bubbles and debt will lead to a global wealth destruction that has never been seen in history. The bubble assets, stocks, bonds and property, will decline by more than 90% in real terms. By 202, the Forbes Global Wealth list will be totally decimated and unrecognizable compared to the 2018 list. So although they have done much better by multiplying the paper assets than they would have done in gold, that is all about to change.

In 2002, I introduced some investors to an insurance (Gold) that gave them a 9% to 12% annual return ON the capital (depending on currency) in the ensuing 18 years plus a guaranteed return OF the capital. A few wise investors jumped on it. The investment was of course gold. Over 99.9% of investors would have laughed at the idea.

If today I suggest that there is an investment that will give double-digit returns for at least 6 years and guarantees the return of the capital, most investors would love the idea. If I then explain that the investment is physical gold, there will be no takers.

Whether it is the Forbes billionaires or ordinary investors, today they have a unique opportunity to insure their wealth with virtually no risk. But no one will do it. Everyone will continue to believe that trees grow to heaven and that their wealth can be multiplied again and again.

The Western world at large will only look at gold when it has doubled or more. Then they will wait for a correction which will not happen. Then, at multiples of today’s price, they will rush to buy gold and silver, but at that time there will be virtually no physical gold or silver available at any price.

We will see a similar panic that took place in China in the 1948 hyperinflation when people were panicking to get hold of 40 gram of gold allocated by the government. 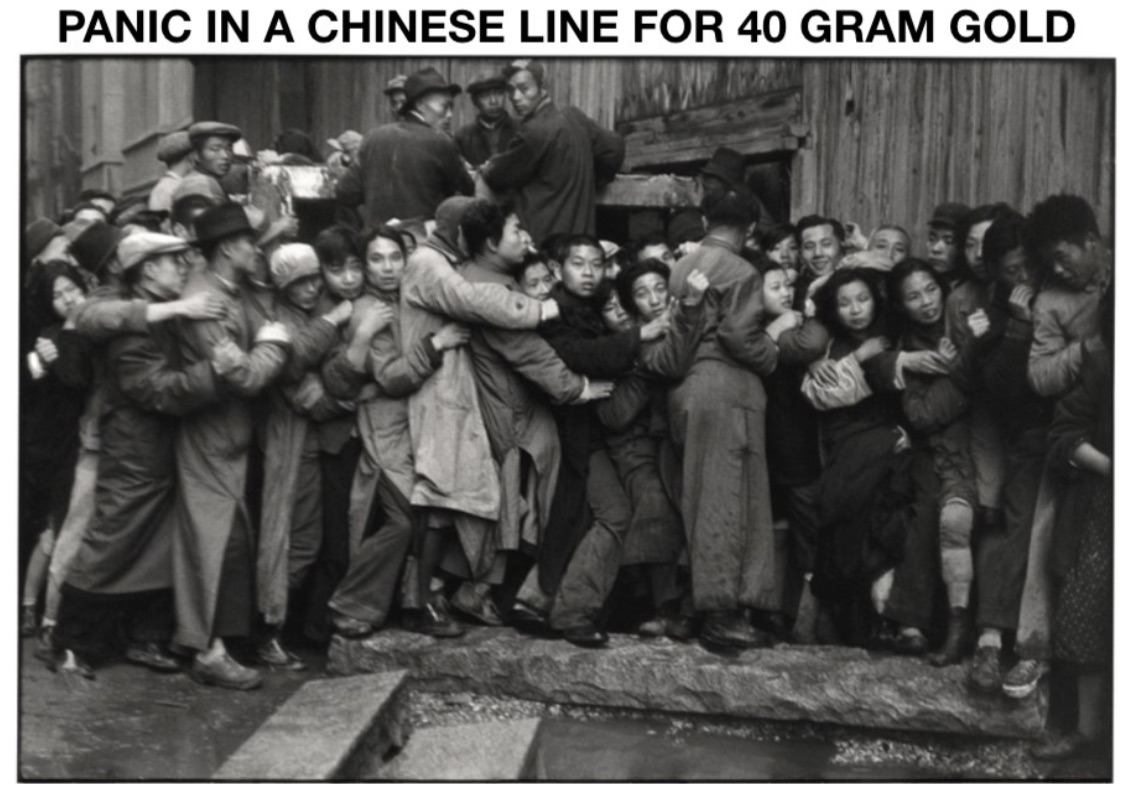 Insurance must always be bought when you don’t need it. Afterwards it is too late. For investors who want to avoid the coming panic in financial markets, now is the time to buy protection in the form of physical gold and silver. This is probably the last chance to buy insurance which will not only give a guarantee of the return OF the capital but is also likely to give an extraordinary return ON the capital…For those who would like to read more of Egon von Greyerz’s fantastic articles CLICK HERE.

And discussing the coming market collapse, the surge in gold and silver and what to expect next for the metals, KWN has now released Egon von Greyerz’s powerful audio interview and you can listen to it by CLICKING HERE OR ON THE IMAGE BELOW.