Fed’s Decision Will Heavily Impact These Two Major Markets, Plus A Look At Silver

On the heels of the Fed’s decision to taper more aggressively and raise rates 3 times in 2022, two major markets will be heavily impacted, plus a look at silver.

Keep An Eye On Silver
December 15 (King World News) – James Turk:  It’s too early to say whether today was another head-fake below $22 trying flush out some sell stops on this NY spot silver chart. But it’s encouraging silver closed in its support zone back above $22. Let’s see if silver can now climb higher from here like it did back in October. 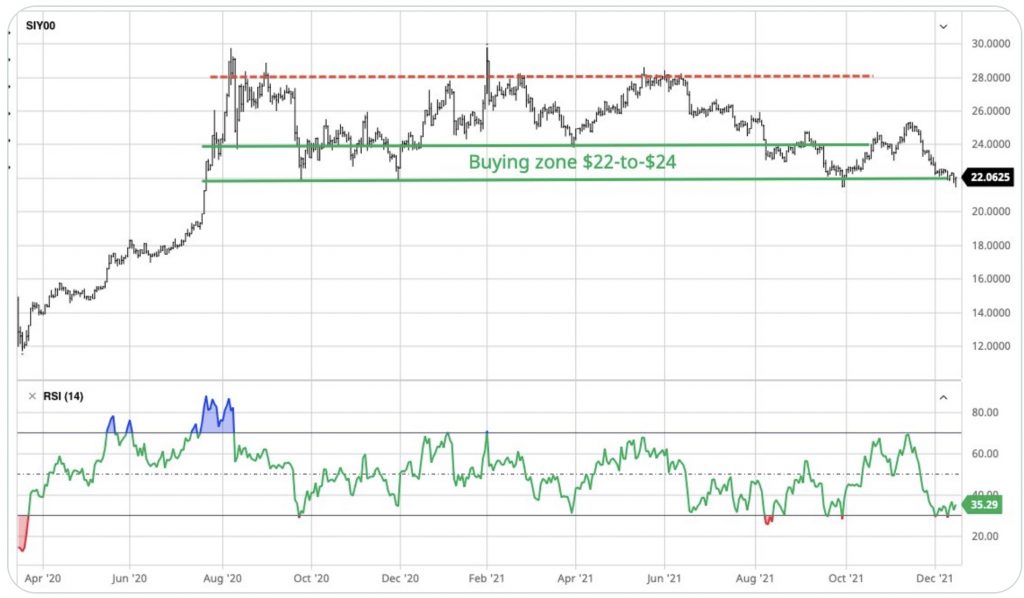 INFLATION RUNS FASTER AGAIN IN NOVEMBER
Gerald Celente:  The U.S. Consumer Price Index grew by 6.8 percent last month, year on year, faster than at any time since June 1982, when prices rose at a 7.2-percent clip, the U.S. Labor Department reported.

Inflation’s rate was just 1.1 percent in November 2020 and had shot to 6.2 percent in October this year.

The index added 0.8 percent from October through November.

Fast-food restaurants tacked 7.9 percent onto their menu prices, the fastest climb on record, largely due to wage bumps to attract and keep workers in a notoriously underpaid industry facing the tightest labor market in memory.

This year’s rise in restaurant prices indicates that businesses are ready to pass their higher costs through to consumers rather than accept narrower margins, economists told The Wall Street Journal.

Sixty percent of small businesses increased prices between 1 September and 30 November, according to a recent WSJ poll of 560 business owners.

Although U.S. wages have grown 4.8 percent during the 12 months from November 2020, inflation has not only erased those gains, but also reduced earners’ actual buying power.

“We find that real earnings growth has been negative for the past eight months, coming in at negative 2.1 percent,” in November, year over year, according to a report by the nonprofit Mises Institute, a conservative website devoted to economic education and commentary.

Combining November’s inflation and wage-growth number yields a “misery index” of 10.82, the highest since June, the Institute noted.

Misery should ease and inflation’s pace slow next year as more workers return to the labor force, consumer spending softens, factory production accelerates, and supply-chain kinks are ironed out, economists told the WSJ.

However, other costs such as rents and medical care will continue to rise, keeping inflation alive, analysts believe.

Also, a surge in COVID variants could send the economy back into recession.

The mixed news and views of inflation come as the U.S. Federal Reserve is balancing two risky policy options: raise interest sooner than planned to pull back inflation or leave rates near zero to continue to support an economy still healing from the COVID War.

The larger risk: workers, now experiencing power that today’s tight labor market has bestowed on them, will continue to demand higher wages, employers will accommodate them to keep good workers, then raise prices to cover the added payroll expense, leading workers to demand even higher pay because everything is then even more expensive.

The result would be a classic wage-price spiral, which Fed policy would be weak to control.

The Fed has not changed policy so far, in large part because, until recently, it has insisted that inflation was “temporary” or “transitory” and would slow by itself. (See “Fed Holds Firm on Policy Despite 5-Percent Inflation,” 20 Jul 2021.)

Last month, the Fed announced that it would wind down its $120-billion bond-buying program by mid-2022, soon followed by hints from chair Jerome Powell that the central bank might well end the program sooner, clearing the way for higher interest rates before summer. (See “The Powell Push: For Better or Worse,” 7 Dec 2021).

He believes inflationary pressures will ease on their own, but probably not until next summer, so “it seems pretty clear that [Fed officials] are going to have to speed up” the bond program’s closure.

The higher interest rates that follow would make loans of all kinds more expensive, slow the rise in home prices, and generally slow the economy, which would moderate inflation’s pace.

However, that also likely would shrink the labor market, leaving more than two million workers still jobless after the COVID War with less chance of finding work.

More U.S. politicians from both Republicans and Democrats parties are growing more skeptical of President Joe Biden’s plan to invest almost $2 trillion in infrastructure at a time when inflation is raging, the labor market is tight, and U.S. government debt continues to balloon to near $30 trillion.

TRENDPOST:
And while it is barely mentioned by the media, the bottom line is, when the Fed raises interest rates, so too with the cost of servicing the debt rise… which in turn will put the nation deeper in debt.

Fed’s Actions Will Heavily Impact These Two Major Markets
TREND FORECAST:
We have long said that when the Fed ends bond purchases and boosts interest rates, the equity and housing markets will fall.

News that the Fed will enact those policy changes even sooner than expected brings those market reversals even closer.

TRENDPOST:
“There is some evidence” that inflation will continue higher after the COVID War ends than it was before the virus arrived, Wall Street Journal analyst Justin Lahart noted in an 11 December essay.

Core service prices, which are less affected by the lingering global supply-chain snafu, were up 3.4 percent in November, year on year, their fastest rise since May 2007, Lahart noted.

The key to next year’s inflation rate will be the rate at which workers’ compensation increases and how much of that increase companies will pass to consumers through price increases, he said.