With gold near$1,230 and silver above $17 as the U.S. dollar and stocks rally, today one of the greats in the business answers the all-important question, what does the 40 percent collapse in oil prices mean for investors?  There is some incredible information in this piece about the stunning collapse in the oil price.

December 11 (King World News) – “However, the Saudi spokesman came out last week saying that the price of oil will settle around $60 per barrel. This is in stark contrast to what they have said in the past that $100 per barrel was the proper price.” — Portola Notes 12-6-14

I found Portola Notes particularly interesting yesterday as crude oil nosed towards the $60 a barrel level. I think the Saudi spokesperson's comments that, “The price of oil will settle around $60 per barrel” is timely for the same reason. Then, into my mailbox, came the attendant chart showing the long-term “uptrend line” for crude oil.

KWN note:  The oil chart below is from top Citi analyst Tom Fitzpatrick and he stated the following, “A bounce back towards $90 or above looks likely over the next 12 months.” 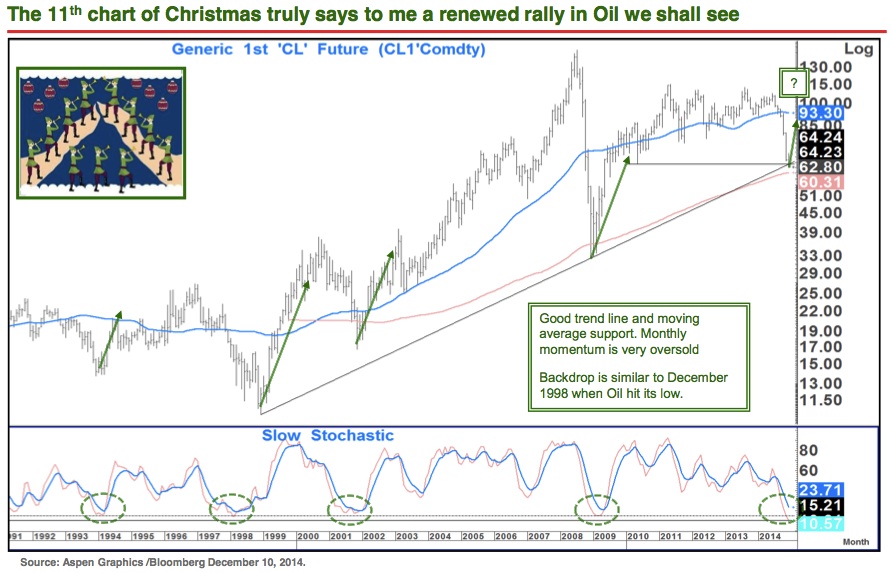 Saut continues:  “Notice that the 15-year ascending trendline suggests $60 is where price support should be found. Then too, as often stated in these missives, Saudi Arabia's social agenda cannot be executed with $60 oil.

The good folks at Portola seem to agree as they went on to note, “The Saudi national budget is predicated upon an average price received of $102. At $60, it has been estimated that the Saudi revenues are lower by about $100 billion per year. That probably is not sustainable, regardless of whatever reserves they might have socked away over the years. Our suspicion is that the Saudis saw an opportune moment to strike against shale oil believing that the tight supply/demand relationship would make the trip to $60 brief before heading back up to their $100 target.” Whether or not oil trades back to $100 anytime soon is debatable, but the “call” for some kind of bottom in oil prices is consistent with Raymond James' fundamental energy research team, which thinks oil is in a bottoming phase. A little later in yesterday's session came an energy piece from portfolio manager Ed Cowart, who hangs his hat at our asset management affiliate, Eagle Asset Management. He had this to say (as paraphrased):

* There is no more “cheap” oil to be found. It is true that some OPEC producers have additional barrels that they could bring on at a relatively low cost but it is generally acknowledged that the marginal cost of new production is in the $80-per-barrel area.

* Over time, the price of a product must converge with the cost of production. That is not controversial. What we don't know is exactly what time period we are looking at.

* Historically, oil price declines that weren't associated with recessions have been rather short-term affairs because demand growth continues while a supply response from higher-cost producers can happen pretty quickly.

* The global oil market is not greatly oversupplied at probably less than 2 million barrels a day. OPEC had been overproducing its quota by nearly 1 million barrels a day. If one wants to find a glimmer of hope (for oil prices) in OPEC's statement, keeping the current quotas implies a cut in current production. Unfortunately, there was no mention of more vigorous enforcement.

* OPEC will be disappointed if it believes it can “kill” U.S. shale-oil production growth. With prices below $70 per barrel, companies will curtail – and soon – their drilling on marginal acreage. But I have no doubt that the long-term outlook is for oil prices to move higher. Demand increases with economic growth, industrialization and modernization of emerging markets. Meanwhile, supply from existing reservoirs inexorably declines. The U.S. shale resources are known and the techniques to exploit those resources have been well-learned over the past five years. Some slowdown in activity is inevitable at lower prices but companies eventually will recover that oil. In the meantime, all OPEC members except Saudi Arabia, Kuwait and the United Arab Emirates are suffering. We would not be surprised if OPEC revisits its decision well in advance of the next scheduled meeting in June.

* In the past four years, the following OPEC members have experienced some sort of violent turmoil in or near their oil-producing facilities: Algeria, Ecuador, Iran, Iraq, Libya, Kuwait, Nigeria, Saudi Arabia and Venezuela. Add in non-OPEC member Russia for a more complete list. Given the propensity for problems in these countries, all of which are necessary to maintain the fragile balance of world oil flows, the lack of supply disruption over the past few quarters is remarkable.

Therefore, I am unconcerned with the “crash” in oil prices, believing the benefits to the economies of the world far out-weigh the negative impact to capex spending in this country and the concurrent employment impact, which is less than the monthly non-farm payroll increases. Additionally, I am fielding questions from folks like, “Are the MLPs really going to run out of oil,” which are the kinds of questions that typically have occurred at bottoms. I think buying the midstream MLPs in tax-loss selling season makes a lot of sense. For midstream ideas, please listen to yesterday's MLP recorded call from our analyst Darren Horowitz.

Today, the two most important economic numbers are Job Claims (E: +295K) and Retail Sales (E: +0.4%). Overnight the Russian central bank raised interest rates, Norway cut rates, the Euro zone equity markets stabilized on ECB stimulus hopes, China told its banks to increase lending, and French core inflation turned negative. All of this has the preopening S&P 500 futures better by 2.40 points at 7:00 a.m., but that is normal following what seems to be a 90% Downside Day yesterday where 90%+ of total volume, and total points, traded came in on the downside. However, the perfect set-up for the Santa rally would be to have another decline into the 2000 – 2010 level by the S&P 500 (SPX/2026.14).”