Today the man who has become legendary for his predictions on QE and historic moves in currencies and metals told King World News that the Bank for International Settlements (BIS) just intervened in the gold market as all hell is about to break loose in financial markets.

January 10 (King World News) – Egon von Greyerz:  Donald Trump is probably the luckiest presidential candidate in history to have lost an election. He doesn’t realise it yet as he suffers from a self-inflicted wound in the final moments of his presidency. Nor does Biden yet realise how unlucky he is to have won. But that will soon change as Biden’s presidency goes from crisis to crisis in all areas from monetary to fiscal to social and political. Very little will go right during his presidency.

The next four years could easily be four years of hell for Biden, for the US, and thus for the world. That is if Biden stays the course for the whole four years.

TRUMP OBLIGED AS PREDICTED
When Trump won the election in November 2016, I wrote an article dated Nov 18, 2016, called “Trump Will Grow US Debt Exponentially”

The article also contained the following graph. In the article I predicted that US debt would double by 2025 to $40 trillion and that it would be $28 trillion in January 2021 at the end of the four years. 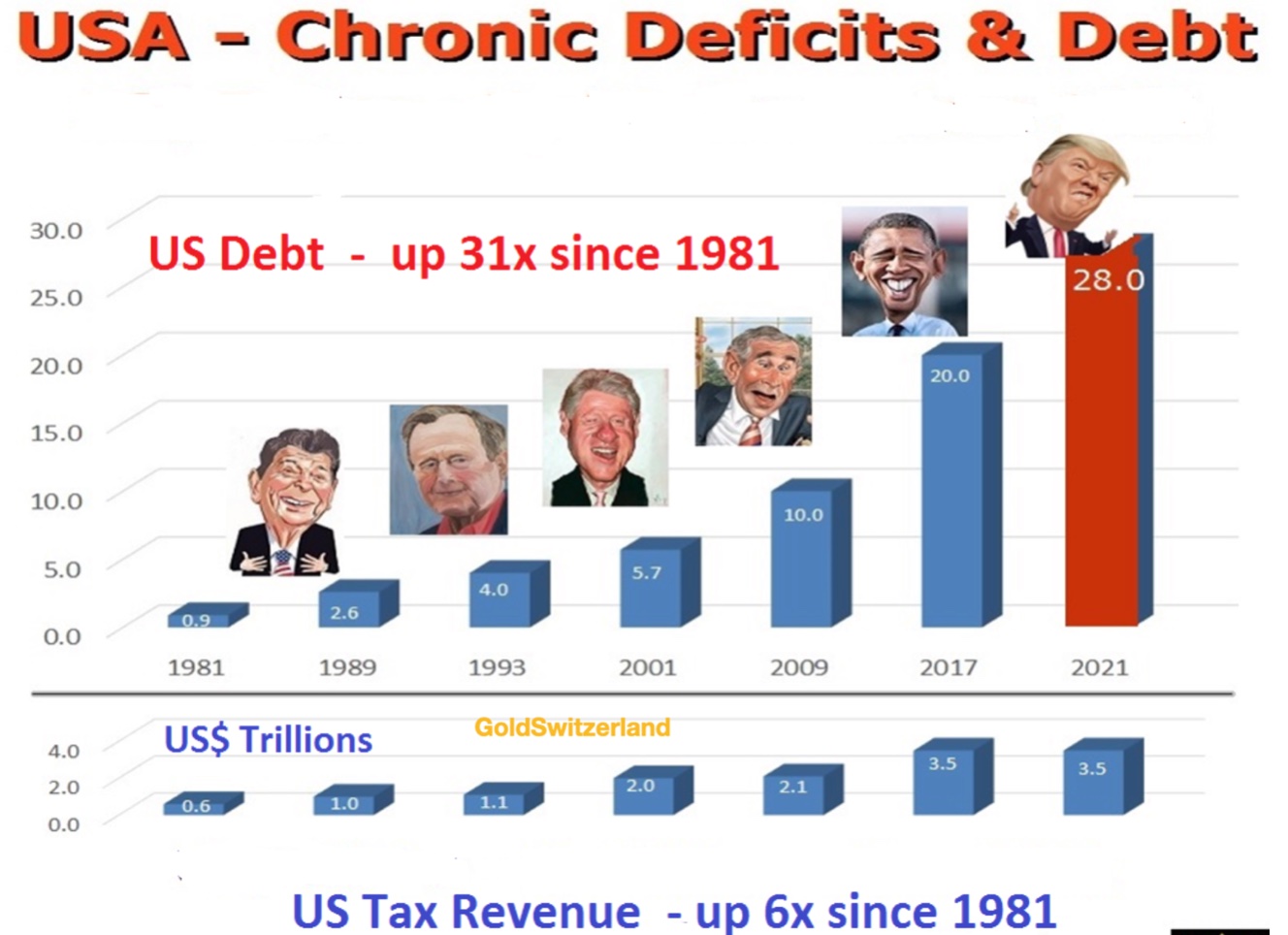 Well, surprise, surprise, the debt is today $27.77 trillion, which can easily be rounded up to $28t. I am certainly no forecasting genius, nor was the forecast just luck. No, it was applying the best method that we have all been given but that few apply or understand. This method is called HISTORY.

Even worse than the debt explosion is the the lack of tax revenue to finance the escalating and chronic budget deficits. As the graph above shows, debt has grown 31x since 1981 whilst tax revenues have only grown 6x.

The US deficit is currently $3.3t which is virtually equal to total tax revenue of $3.4t. This means that 50% of annual government spending needs to be borrowed.

BANANA REPUBLIC
The US economy now clearly fits the definition of a Banana republic. A brief description is:

“In political science, the term banana republic describes a politically unstable country with an economy dependent upon the exportation of a limited-resource product, such as bananas or minerals.”

In the case of the US, the product they export is of course dollars printed out of thin air – a wonderful export item since supply is unlimited…

“Typically, a banana republic has a society of extremely stratified social classes, usually a large impoverished working class and a ruling class plutocracy, composed of the business, political, and military elites of that society.”

Like all Banana Republics, the US economy and social structure is now on the way to perdition with virtually no chance for Biden & Co. to reverse the inevitable course of events.

HISTORY – HISTORY
So back to history – History is what has formed us and history doesn’t just rhyme as Mark Twain said but it often repeats itself. The debt explosion is another good example.

If more people studied and understood history, they would not just recognise the utmost importance of what lies behind us but also that history will teach us about what lies in front of us.

But very few scholars and no journalists study history. Instead we are now in an era when both the media and universities worldwide want to erase history and rewrite the history books. This shows us the total lack of understanding of the utmost  importance of history in the evolution of the world.

But this is part of the total decadence and denial that we see at the end of major eras or cycles. The current cycle, whether it is just a 300 year cycle or a 2,000 year old cycle is now coming to an end. These changes clearly don’t happen overnight but the first phase of the fall can be dramatic. And that phase is likely to be starting very soon.

BIDEN ONLY HAS ONE TRICK UP HIS SLEEVE
So what will Biden and his masters do? Well, Biden has already called for $ trillions of further support. He also said: “If we don’t act now, things are going to get much worse and harder to get out of a hole later.”

We always knew that Biden really only had one trick up his sleeve – TO PRINT MORE than any president has done in history. To beat Trump is not hard, he only printed $8t in 4 years!

Let’s just remind ourselves that it took 200 years (1808-2008) to increase the US debt from $65 million to $10 trillion. When Obama took over in Jan 2009 he inherited a $8t debt.  Eight years later he handed over a $20t batten to Trump. In 8 years Obama printed and borrowed more money than what the previous presidents had achieved in the course of 200 years!

So will Biden print more than $10t? Definitely! Will he do it in 4 years? Most probably!

As I forecasted in my article in 2016, the debt will be at least $40t in Jan 2025, a $12t increase from today. But no one should believe that Biden will stop at $40t. The US economy is already leaking like a sieve. And the problems have just started.

The problems in the currently semi-paralysed US economy will escalate at a rapid rate and the Biden team will attempt to plug every hole at all levels from a minimum wage to saving major corporations.

PROBLEMS IN THE FINANCIAL SYSTEM AND NOT CV-19 STARTED THE CRISIS
Still, we mustn’t forget what started the latest phase of problems in the US economy. It wasn’t Covid back in February 2020. No, that was a mere catalyst. The underlying disaster was a lot deeper. The real problem started back in Aug-Sep 2019. This is when the problems in the financial system became acute and both the ECB and Fed started flooding the system with money. But not real money, just worthless paper money created with the push of a button.

Between the Fed and the ECB roughly $8t of “fake” money has been created digitally since September of 2019. It must obviously be called fake since nobody had to perform any work or produce any goods or services against this money. It is really scandalous to call it money since it is no different from the  Monopoly game money.

WHEN THE MUSIC STOPS…….
The printed $8 trillion at $15 per hour (Biden’s new minimum wage) equals 60 million man hours. But in the modern MMT (Money Market Theory) paradigm, you don’t need to work for the money. Whatever the world needs, central banks and governments can just create out of nothing. That is until the music stops. And Biden or Harris are the likely conductors who will preside over the music stopping and the whole edifice collapsing.

The wise will obviously find a chair now because when the music stops there will be no chairs and all hell will break loose. By that time debt will not just be in the $trillions or $100s of trillions. No, the printing will have reached $ and EUR quadrillions as not only most collapsing debt will need to be bought by central banks but also derivatives which probably amount to $2 quadrillion or more.

In addition, medical care, social security and unfunded pensions, will probably exceed $1 quadrillion globally, and add to the demise of the financial system. Could I be wrong? Maybe. Someone gave me once a T-shirt with the inscription:

“I AM NOT ALWAYS RIGHT – But I am never wrong”!

The gift must have been a subtle hint – Hmmm.

Still, in my humble view I don’t believe that any orderly reset will change the inevitable course of events. So as far as I am concerned, it is not IF but WHEN. A professional life of over half a century has taught me that even the most evident events can take longer to develop than you think. But as I see risk at an extreme, now is the time to prepare.

MARKETS
So to finish, let’s have a quick look at where I see markets. I know forecasting is a mug’s game and I am not really interested in how markets move in the short term, this is more from an observational point of view. In the next few years it is all about economic survival and wealth preservation rather than worrying about where the Dow or the Dax is going next.

STOCKS
During 2020, I wrote and spoke about a potential Meltup in markets before a crash. The latest article was called “LIFTOFF & COLLAPSE” published in October of 2020. Well, the liftoff is happening and the Dow is up almost 5,000 points since then and the Dax 2,500 points higher.

The meltup could go a lot higher like exuberant markets often do before they collapse. But due to the extreme overvaluation based on many criteria, the market could turn at any point. So whether we see a top in the next few weeks or months is irrelevant. The risk is to the downside. When markets crash it will be long and violent. A 90%+ fall in real terms is likely over 2-5 years.

Therefore it is much more important to safeguard the position now rather than to go for the final 10-25%. Once the market starts falling, it will be virtually impossible to get out for most investors.

According to our sources, a sell order for 1.4 million ounces (43 tonnes) went through Comex with a value of $2.7 billion. This was most clearly one of the bullion banks acting with the BIS (Bank for International Settlements) in Basel.

No sane trader would ever dump 1.4 million oz of gold in one go in an illiquid market. If he did, he would be fired on the spot. So this was clear manipulation. The big short position of the bullion banks clearly necessitated a lower gold price.

This is what the chart looks like at that time: 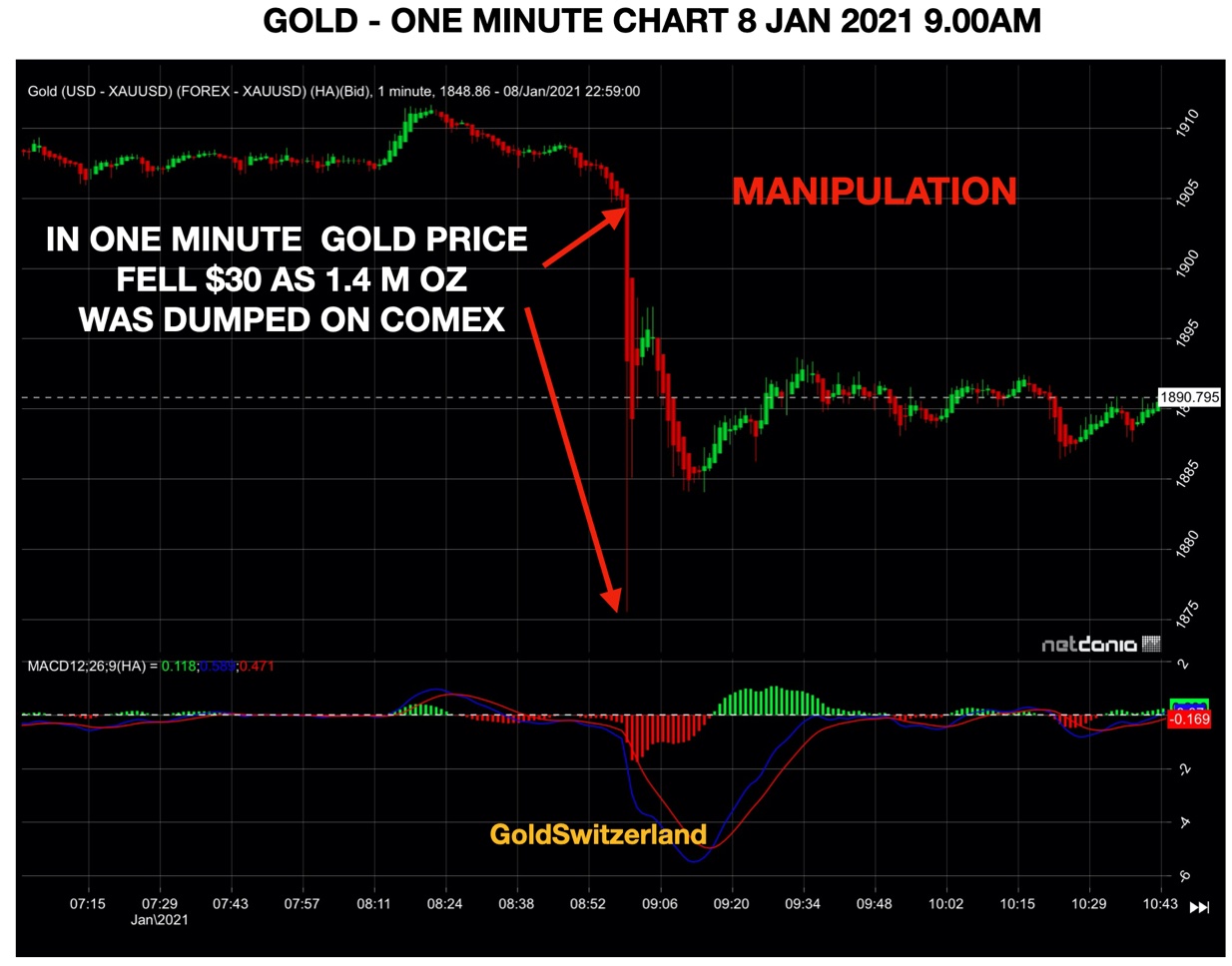 This last move may feel even more frightening since gold came from $1,960 just two days earlier.

But this has no effect on gold’s long term uptrend since 1999. We have seen manipulation before, and the quarterly chart below shows what looks like manipulation on a long term basis.

GOLD MAGINOT LINE
Back in February 2019 I wrote an article about the Gold Maginot Line which had held as a resistance for gold at $1,350 since 2013. I also forecasted that the Maginot line would be broken within the the following 3 months which happened. 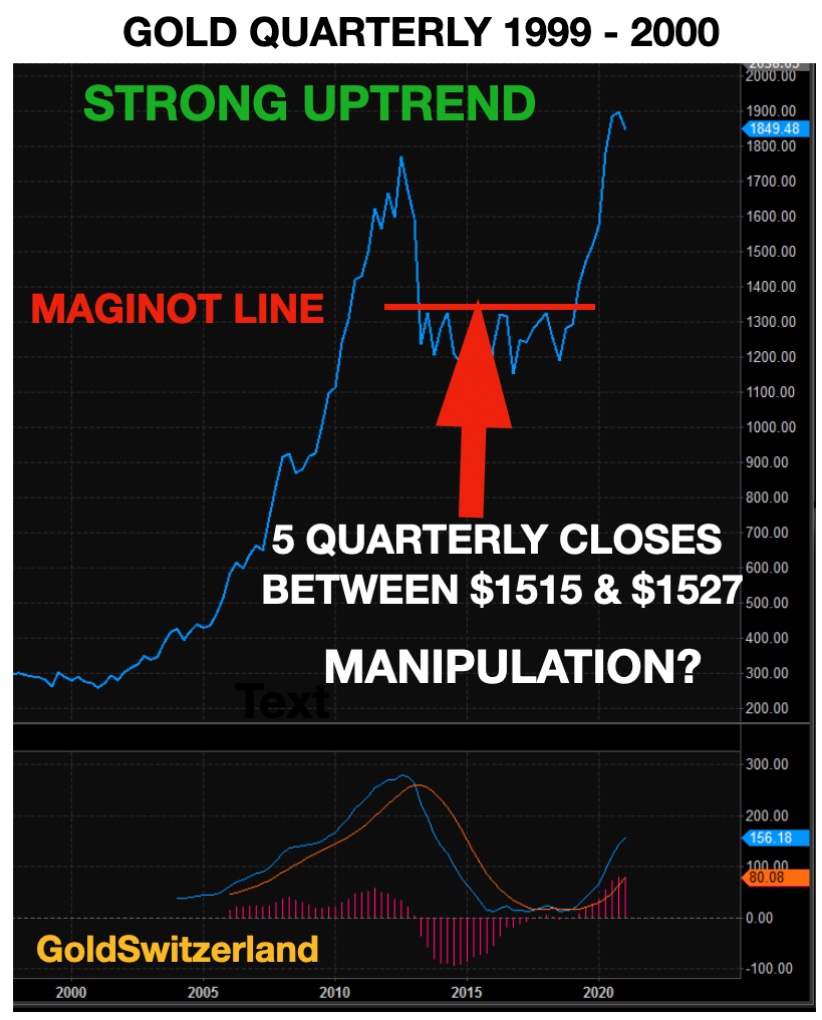 Some invisible hand seems to have been at work.

When the current correction finishes, which shouldn’t take too long, gold will start the journey to much, much higher levels. Next week I will discuss why Gresham’s law will support gold as it moves on into the $2,000s.

But although it is always interesting to talk about the price of gold, it is really quite meaningless. 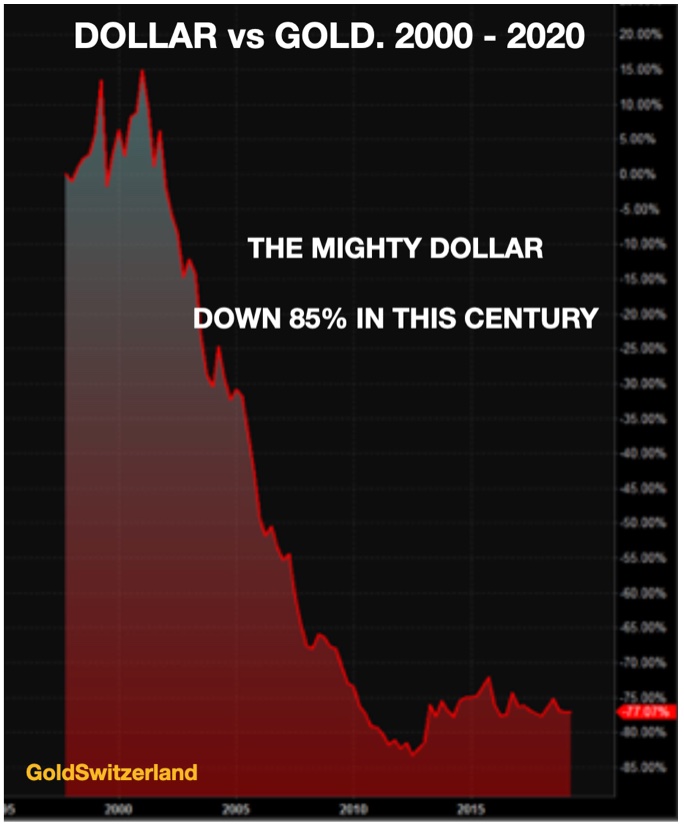 Because we must remember that physical gold is held for wealth preservation purposes only.  To measure its value in increasingly worthless fiat money serves very little purpose.

The state of the world necessitates holding gold as life insurance. Whether gold reaches $2,000, $20,000 or $200 trillion has nothing to do with the value of gold but all to do with a bankrupt financial system and worthless fiat currencies…This will link you directly to more fantastic articles from Egon von Greyerz CLICK HERE.