As the world edges closer to the next crisis, today the man who has become legendary for his predictions on QE and historic moves in currencies spoke with King World News about $18,160 gold and the wisdom of Jesse Livermore.

The Wisdom Of Jesse Livermore
July 7 (King World News) – Egon von Greyerz:  “Lemmings have a herd mentality.  But following the crowd, can have grave consequences like falling off a cliff and drowning in the ocean. Many investors have the same instinct. They follow the crowd and buy or sell when other people do. This probably won’t end in the same disaster as for the lemmings, but following the crowd virtually never leads to a successful long term investment performance.

The biggest investment profits are normally made by investing long term. But the key is to buy when an investment is undervalued and unloved. That reduces the risk substantially and thus the potential return.

Extremely important when investing is to be patient and wait for the right opportunity. As Jesse Livermore said:

“It was never my thinking that made the big money for me, it was my sitting.”

I have probably been following the gold market for longer than most people still being active today. When gold went from $35 in 1971, to $850 in 1980, I owned only a little physical gold. I also owned some Australian mining stocks since the bank where I worked in Geneva was advised at the time by Adolf Lundin. Adolf was a legendary Swedish resource investor who lived in Geneva. Sadly, he died too early in 2006, but his sons have continued to expand the Lundin Group to one of the most successful businesses in the resource sector in the world.

So back in 1969 I made my first investment in mining stocks based on Adolf Lundin’s recommendations. I remember Adolf phoning in the middle of the night in Europe from Australia with the latest hot tip. At the time there was a boom in mining stocks. The most infamous company was nickel miner called Poseidon which rose dramatically and later collapsed. Then, when Nixon closed the gold window in August 1971, a spectacular bull market in precious metals started and a bear market in paper money which lasted until January 1980…

I Believed The World Economy Would Have Very Serious Problems
After the 1980 peak, as gold and the gold mining stocks started falling, I was involved in corporate life and stopped following the resource sector. But then in the 1990s, I started analyzing global financial and economic risk and came to the conclusion that the world economy at some point would have very serious problems. At the time I considered that the two most likely areas that would cause this were derivatives and debt.

We Then Aggressively Moved Into Gold
I was looking at how best to protect against these risks and gold was the obvious solution. But gold at the time was totally out of fashion and central banks around the world had been reducing their holdings. From the January 1980 high of $850, gold crashed to just over $300 in 1982. Thereafter gold traded between $300 and $500. Central bank selling pushed gold down to a bottom in 1999 at $250. Finally, at the end of 2001 gold seemed to have stabilized around the $300 pivot point. We then decided that risk seemed right with gold totally unloved and undervalued. So we decided to make physical gold our primary investment in early 2002 when the price was around $300, or in pounds, £200 per ounce. At the time we were based in the UK.

So when we entered our physical gold investment in 2002, I had certainly been “sitting” for a very long time. Gold started the current bull market in 1971 at $35, made a temporary top in 1980 at $850 and then spent 20 years correcting. But the gold bull certainly hadn’t finished, central banks  saw to that. They continued their irresponsible monetary policy, leading to a chronic credit expansion, debasement of currencies and thereby permanently underwriting the gold price.

Inflation-Adjusted Gold Price
Looking  at gold on an inflation adjusted basis, 2000 was the lowest point since 1971 when the price was $35 per ounce (based on Shadow Government Statistics inflation calculation). 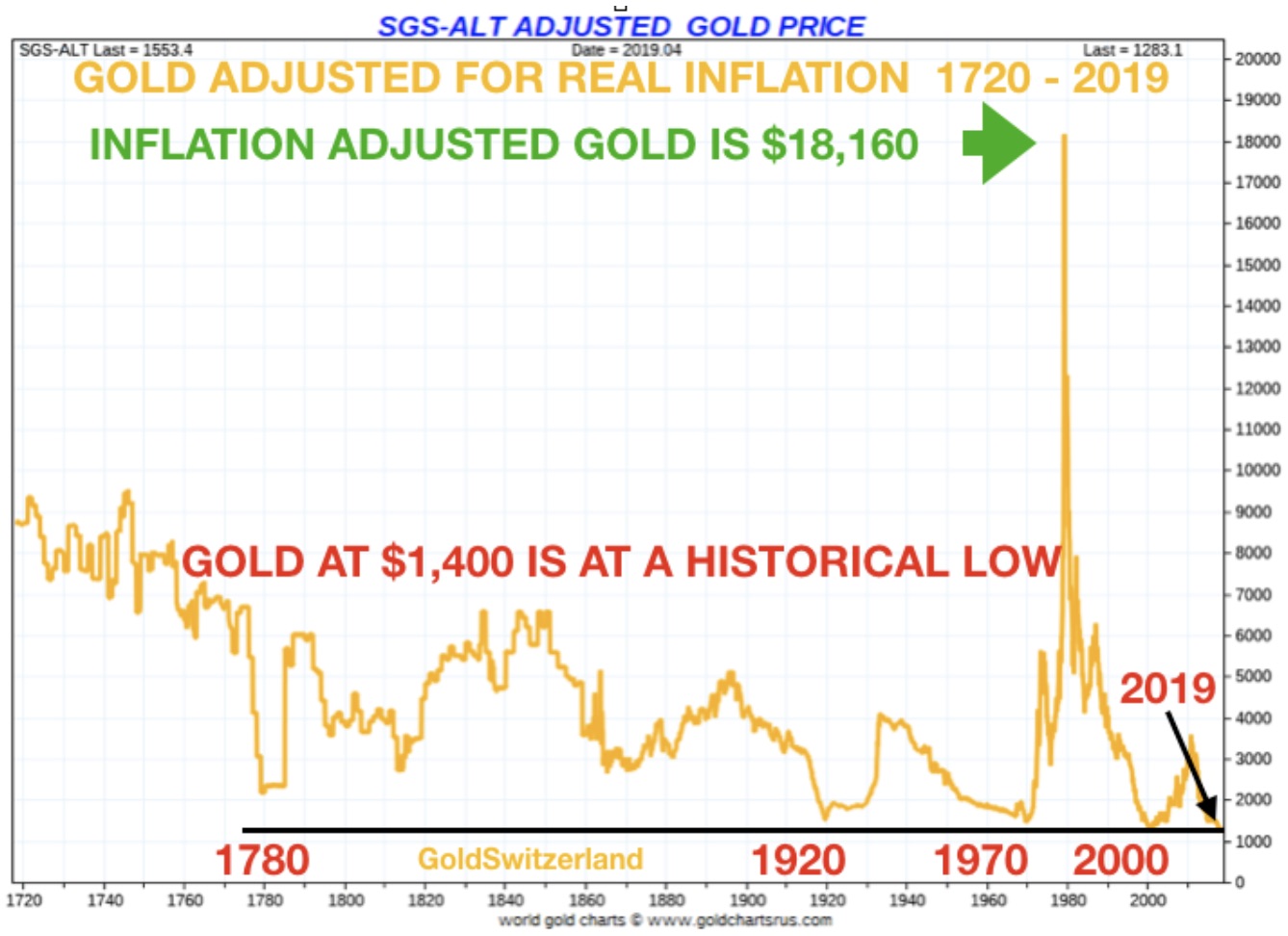 $18,160 Gold
What the above chart also shows is that the peak price for gold in 1980 at $850, today would be $18,160 adjusted for inflation. There is no reason why gold wouldn’t reach that level in the next few years, especially as the gold paper market implodes.

“the desire of gold is not for gold.
it is for the means of freedom and benefit”

Once we owned the best insurance you can buy, our intention was to keep this cover indefinitely.

It is the best kept secret in the world that you can buy an investment with the following attributes:

It is the opportunity of a lifetime to acquire insurance that is also a superb investment, or an investment which is also the ultimate insurance, and all this at the lowest price ever in real terms.

We have been sitting with our gold position since 2002, and virtually all the investors we advise have also kept their gold since they acquired it. So when would we dispose of all or part of our gold and advise our investors to do the same? First, I doubt we would ever dispose of all our gold. Because gold is generational wealth and an asset that should always form the foundation of your wealth pyramid. 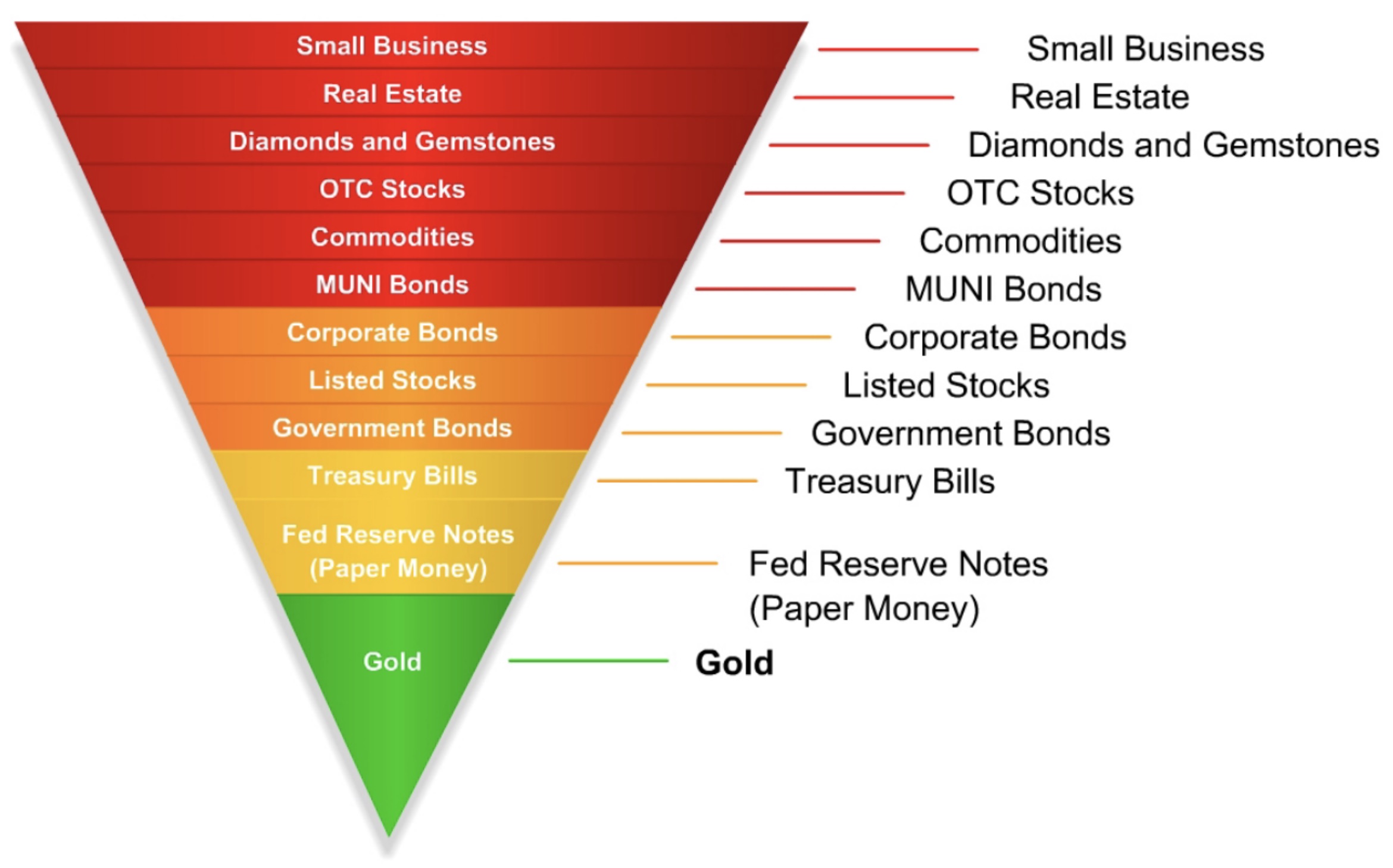 Today…
Today, most of the clients we advise hold at least 25% of their financial assets in gold. Some hold a much bigger percentage. It must of course be pointed out that our clients believe strongly that wealth preservation is extremely important at a time when risk is greater than ever in the global financial system. But even if we will always hold some gold, there will be a time when gold becomes over-loved and overvalued. I don’t expect this to happen for quite a few years, whether it is in 5 or 10 years or even longer. At that time we will analyze the state of the world economy and financial system and decide if we should reduce our gold holdings and what we should do with the proceeds.

If the financial system still has major unresolved problems like massive debts and derivatives, then it will still not be the place to put your money. Only when debt and derivatives have imploded and the system is restructured will it be safe to put your money or assets there. Until then, if you can swap your gold for real assets like land, income producing property or  sound businesses at bargain prices, this would be a serious opportunity. History is full of examples of people who used their gold to pick up absolute bargains in periods of economic distress and hyperinflation. 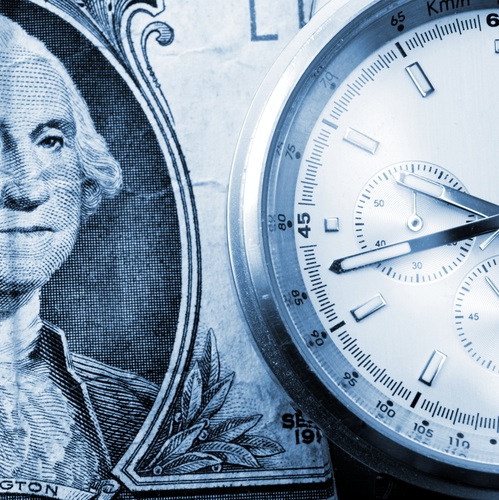 When The Time Is Right…
When the time is right, investors with bigger gold holdings will be able to buy valuable assets with their gold for a fraction of what they cost before the crisis. Price reductions of 90-95% are not uncommon in these periods, especially if measured in gold grams or kilos. For people with smaller gold holdings, this will guarantee them the ability to continue to lead a decent life, as opposed to, for example, the Venezuelans who are now living in total misery.

But we must also remember that if you hold gold, it is extremely important to keep a low profile from a social and personal safety point of view. It will be essential not to flaunt your wealth like many people are doing today. You will also be able to help family and close friends. Remember that with bankrupt governments, there will be virtually no social security or pensions, so there will be many people who will need your assistance.

The inflation adjusted gold chart above is one method of illustrating the real value of gold. Another way is to adjust the gold price for the increase in US money supply. As the chart below shows, on that basis gold is as cheap today as it was in 2000 at $280 or in 1970 at $35. So whatever method we apply, it comes back to the fact that gold today is an absolute bargain. 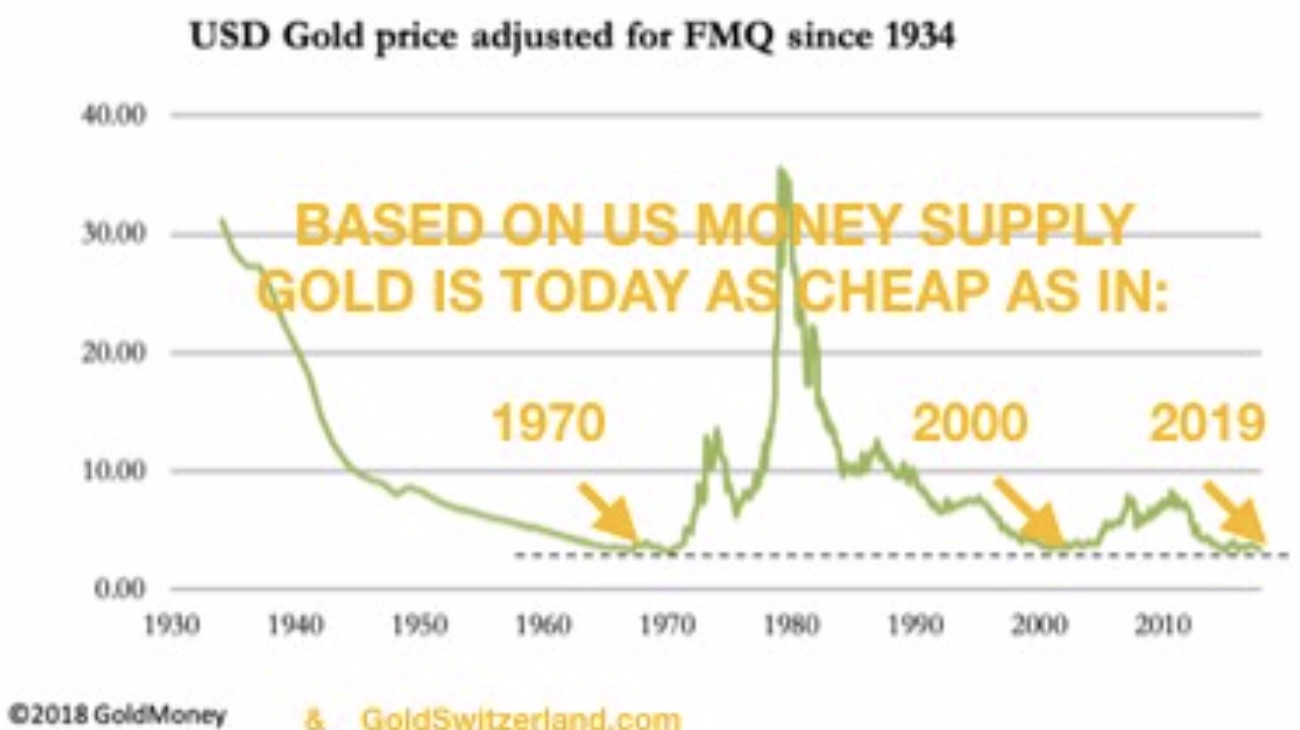 Some of these investors bought early and some bought at higher prices as gold was rising quickly to the $1,920 top in 2011. The good thing is that it doesn’t matter at what level you bought your gold in the last 17 years since gold will go to multiples of the current price. As I have already stated, it will be the ultimate form of wealth preservation and a superb investment over the next 5-10 years.

So some of us took our positions in gold 17 years ago and many others later. But since we are all holding gold for wealth protection reasons, we will be “sitting” for many years to come without any concern about the value of our gold holding. We know with absolute certainty that governments will continue to oblige by destroying the economy, spending money their countries can’t afford to spend, increasing deficits and debts, and totally debasing currencies until they are worthless. For those reasons we are holding gold and sleeping well at night…For those who would like to read more of Egon von Greyerz’s fantastic articles CLICK HERE.

It’s Like Magic, Plus This Remarkable Chart Tells You All You Need To Know About The Gold Market CLICK HERE TO READ