As we get ready to kickoff the second week of trading in May, today the man who has become legendary for his predictions on QE, historic moves in currencies, told King World News the shocking truth about what is really happening that is being hidden from an unsuspecting public.

All Of This Is Being Hidden From An Unsuspecting Public
Egon von Greyerz:  “So here we are again! Thousands of tonnes of paper silver and paper gold are being dumped over just a few days. For anyone who doesn’t understand what is happening, let me categorically state that this has nothing to do with the real physical market in gold and silver. No, this is blatant manipulation by governments and bullion banks as well as speculators…

Bullion Banks Leveraging 20-50 Times Clients’ Money
Egon von Greyerz continues:  “What is happening has nothing to do with real markets or real supply and demand. What we are seeing is governments trying to obfuscate their total mismanagement of the economy and the currency. We are also seeing bullion banks leveraging their clients money by 20-50 times in order to stop gold and silver paper holders from calling their bluff and asking for physical delivery. We know and the banks know that the day they will need to come up with real gold and silver bars, it is game over. They don’t have enough physical gold or silver to cover even a fraction of their paper shorts. Between futures exchanges, bullion banks, including precious metals derivates contracts, there are hundreds of ounces of paper gold and silver outstanding for every ounce of physical backing.

The problem is that it is not only the bankers that are the culprits in this game. No, governments are just as culpable. Western banks officially hold 30,000 tonnes of gold. Virtually no Western central bank has ever had a physical audit of their gold. The US had their last audit during Eisenhower’s presidency in 1953? Meanwhile, in the last few decades Western central banks have been liquidating a major part of their gold holdings. For example, the UK sold half of their gold holdings at the end of the 1990s and Switzerland sold over half. Norway sold ALL their holdings in the early 2000s.

What the central banks didn’t sell, they lent or leased to the market. They did this to earn a return on their gold. Most of the lending took place through the LBMA (London Bullion Market Association) banks in London and some in New York. So a central bank would lend part of its gold to the market and the gold would stay within the London or New York pool. But that changed in the 2000s. The big buyers of gold are now China and India. Neither of these countries is interested in keeping their gold in London or New York. Instead they want physical delivery. The normal pattern is for the 400 oz bars to be sent from (primarily) London to the Swiss refiners to be broken down into 1 kg bars. The kilo bars are then exported from Switzerland to the buyers in China and India plus other major buyers like Russia. This is why the UK appears as a major exporter of gold.

The consequences of these transactions are very serious for Western central banks. Their gold, which was leased to the market, doesn’t exist anymore. It has been broken down into new 1 kilo bars and is gone forever, now in the hands of the Silk Road buyers. The West will never get this physical gold back. All they have is an IOU from a bullion bank that will never be able to deliver physical gold against their paper commitment.

Nations That Understand What Is Going On Are Not Panicking…
Since there have never been any audits, nobody knows how much unencumbered physical gold is still left in Western central banks. It is very unlikely to be even 50% of the 30,000 tonnes that they officially hold. The people and nations that understand that this Ponzi scheme is going on are not panicking when the price dips in the paper market because they know that the ones who hold the physical gold also have the power. However, it is not only a question of power, but also confidence that physical gold will protect the people who understand the significance of holding it.

But The Weak Hands Are Being Shaken Out
At times like we are seeing right now in the precious metals markets, the weak hands are shaken out. Weak hands are speculators who buy gold on margin. Let me make it very clear. You must never buy a wealth preservation asset and leverage it by borrowing against it. When you borrow against your gold and silver, it doesn’t belong to you anymore. Instead it belongs to the bank or the lender. Buying physical gold and pledging it serves no purpose. That is pure speculation. In that case, you might as well just buy gold futures, which of course has nothing to do with wealth protection. 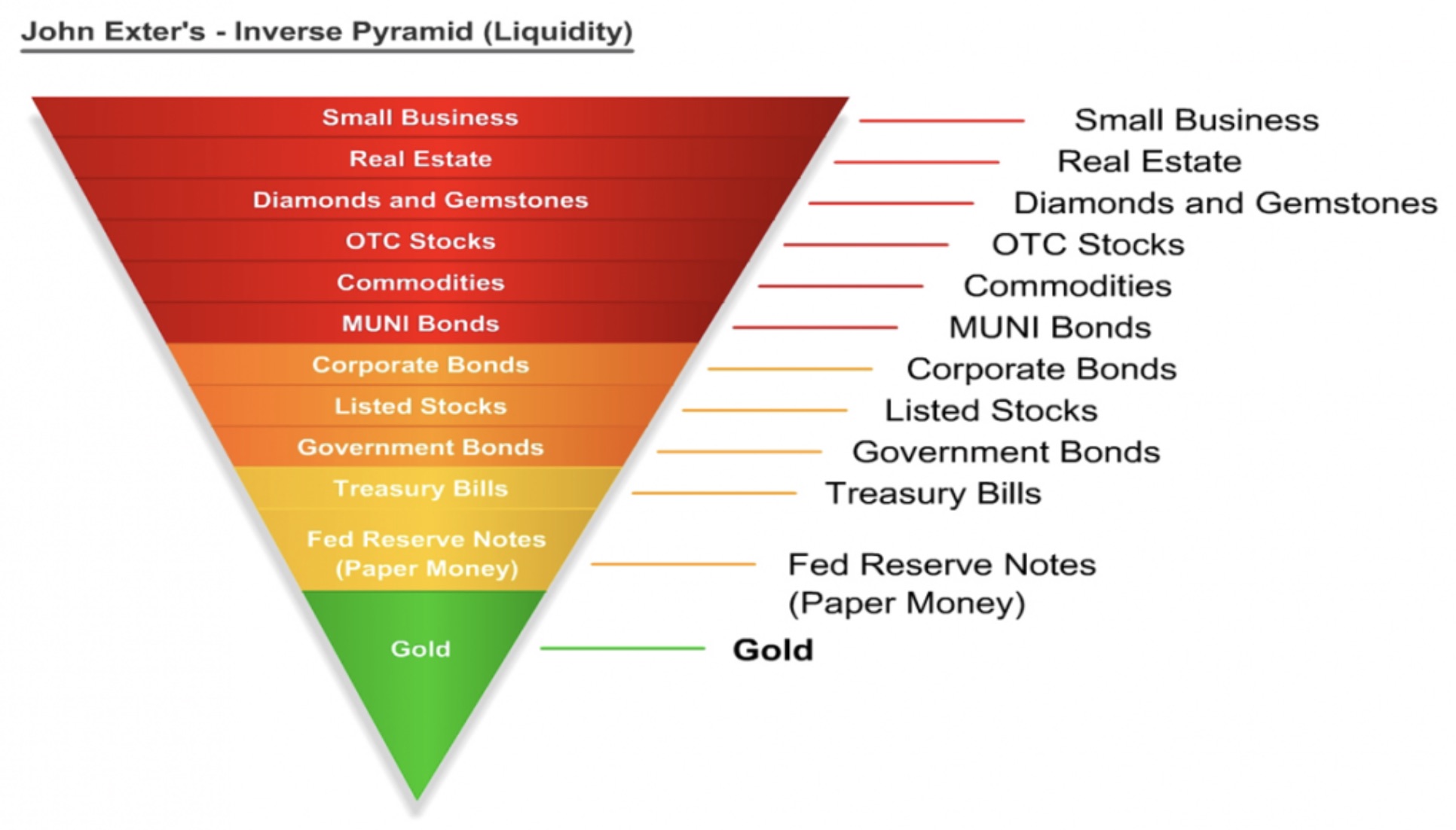 In an era when governments print unlimited amounts of money and expand credit ad infinitum, precious metals are the only assets that will maintain purchasing power and preserve wealth. But they must of course be stored in a politically safe country and outside the banking system.

Regarding Some Small Retail Investors Selling Gold & Silver…
We now hear about major liquidations of gold and silver by small retail investors. The people who sell do not understand the purpose of holding gold and silver. They are in it for a quick buck and will have nothing left when the real crisis starts. And it is absolutely guaranteed that we will have the biggest financial crisis in history in the next few years.

Our Clients Are Not Selling Even One Ounce Of Gold Or Silver
Since our company is very close to the real physical gold market, let us report that we are seeing no selling of physical gold or silver. Our investors understand precious metals and they know why they are holding physical gold and silver. They are not fickle or nervous because manipulators are trying to frighten them into selling their gold and silver. They know that in the next few years their precious metals will not just maintain purchasing power, but will instead actually magnify their wealth. They also know that, as most assets crash including paper money, gold and silver will vastly outperform all investments.

Here Is What The Swiss Refiners Are Saying
We also speak to our friends the Swiss refiners who produce 60-70% of all the gold bars in the world. They are seeing continued strong demand from Asia and particularly China. The West has been selling physical gold for a few decades, while the East has continued to buy massive quantities. 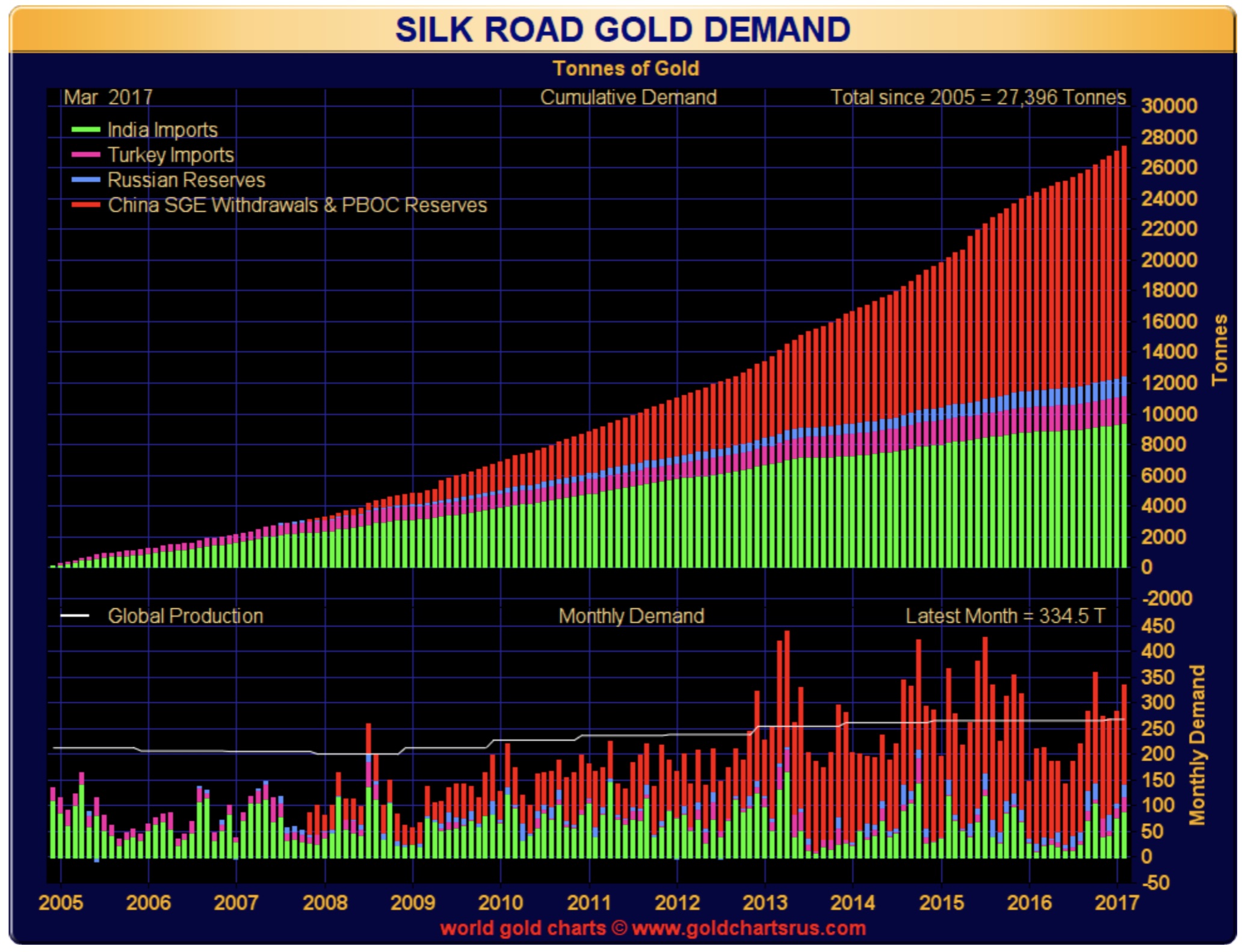 This Is Why China Is Really Buying All The West’s Physical Gold
China started accumulating gold serious amounts of physical gold in 2008, during the Great Financial Crisis. They knew what was coming and they knew that the Western financial system would not survive the massive money printing that the West had embarked on in their futile attempt to save the system. The Chinese also know that the 2006-9 crisis was just a rehearsal. This is why they have increased their gold holdings substantially since then.

Of the Silk Road countries, only India and Turkey had substantial holdings at the beginning of the crisis in 2006 — just below 2,000 tonnes in total. China started buying gold on a bigger scale in 2008. Since then China has accumulated a substantial 15,000 tonnes. The total purchases of the four Silk Road countries, China, India, Russia and Turkey, since 2005, has been a staggering 27,400 tonnes. This means that 4 countries have in the last 12 years absorbed all the gold mine production in the world. These countries totally understand the uncontrollable risks in the global financial system and they also know that gold is the best protection against these risks.

Western Investors Should Mirror What The East Is Doing
Investors should follow the wisdom of the East and continue to accumulate gold and silver at the current very advantageous prices. There is no doubt in my mind that in the next few years, gold and silver will be multiples of today’s price.”

Silver Will Stun Investors By Surging Above $50 In 2022