CAUTION BEARS: Stock Market May Continue To Surprise On The Upside

Even with the pullback in the stocks today, bears need to be very cautious here because the stock market may continue to surprise on the upside.

From nay to yay
A little over a month ago, we looked at the internal recovery among stocks in the S&P 500 after a string of violent moves. Similar behavior preceded excellent returns. It’s only gotten better since then.

With a continued rise last week, more than three out of every four stocks in the index recovered above their 50-day moving averages, the most since the beginning of the year. The other two times in the past five years, when this cycled from fewer than 5% of stocks to more than 75%, it coincided with the kick-off to sustained rises. 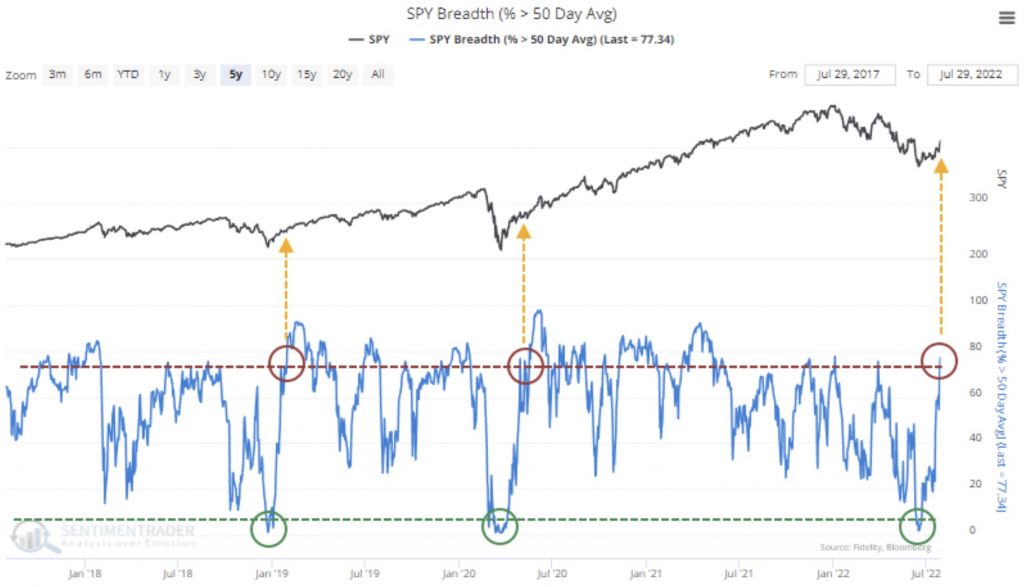 Historically, this was more the rule than the exception. Since 1950, there have been 25 times when medium-term uptrends in S&P 500 stocks plunged to an extremely low level and then recovered to a high level. Over the next 6-12 months, losses were rare, and there was really only one complete failure in 1969. 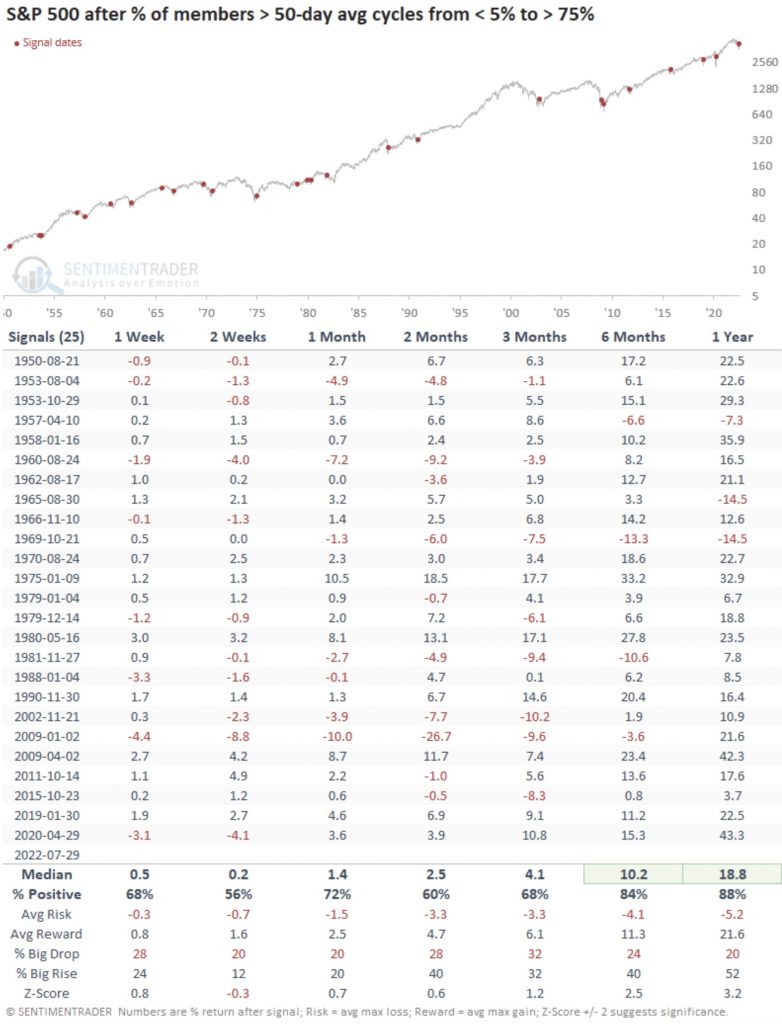 The current cycle is even more notable because of how quickly it unfolded. It took only 27 trading days for stocks to recover, the 6th-fastest cycle in more than 70 years. The table below filters the cycles to include only those triggered within two months. The following 6-12 months showed excellent returns, with no losses a year later. 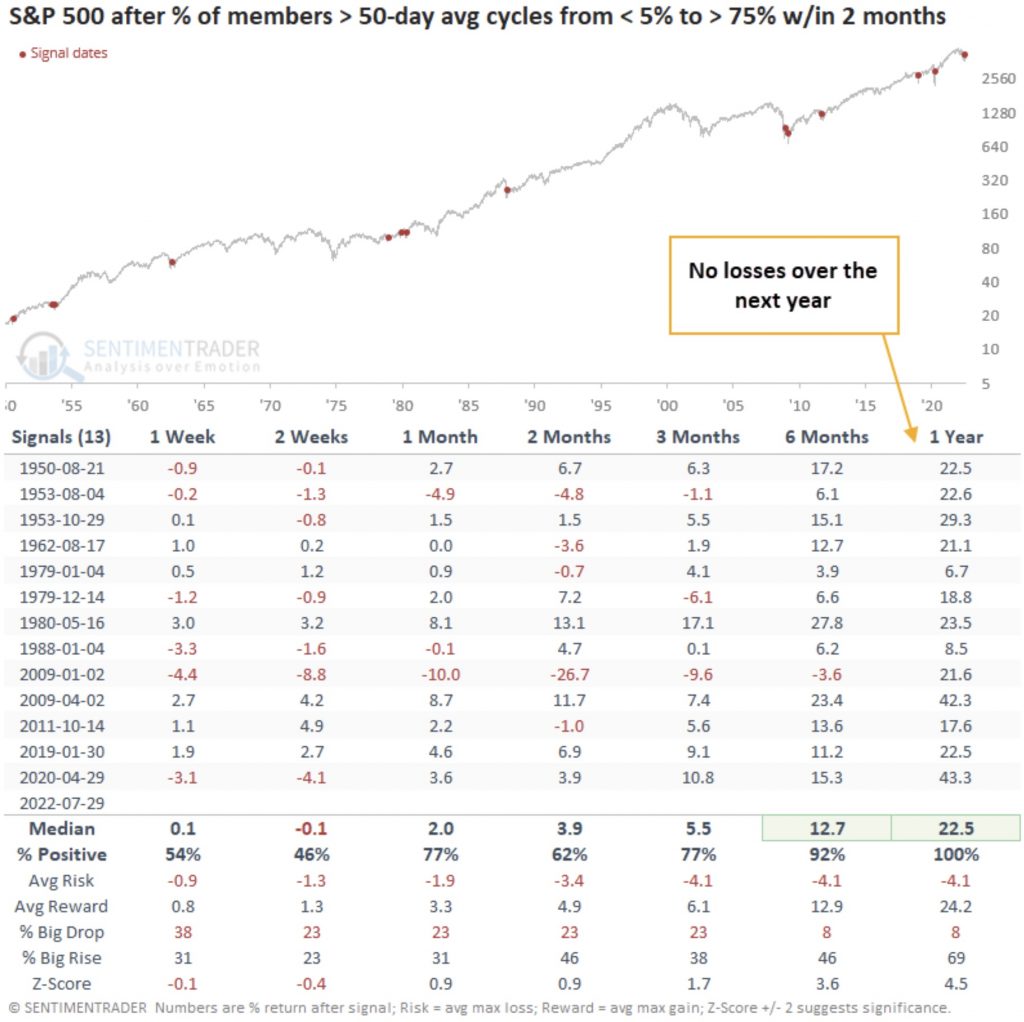 It took some grit for an investor to hold after the January 2009 signal, suffering a nearly 30% drawdown within the first three months. That was the only one that an investor would have hold through a double-digit drawdown. On the flip side, all but two signals enjoyed a gain of 20% or more at the best point during the next year (okay, it was 19.7% in 2011, but close enough).

The index made an impressive recovery, too
The stock recovery helped propel the index to its best monthly gain in almost two years. That relief was welcome, as it came on the heels of a 12-month low and a 20% drawdown. 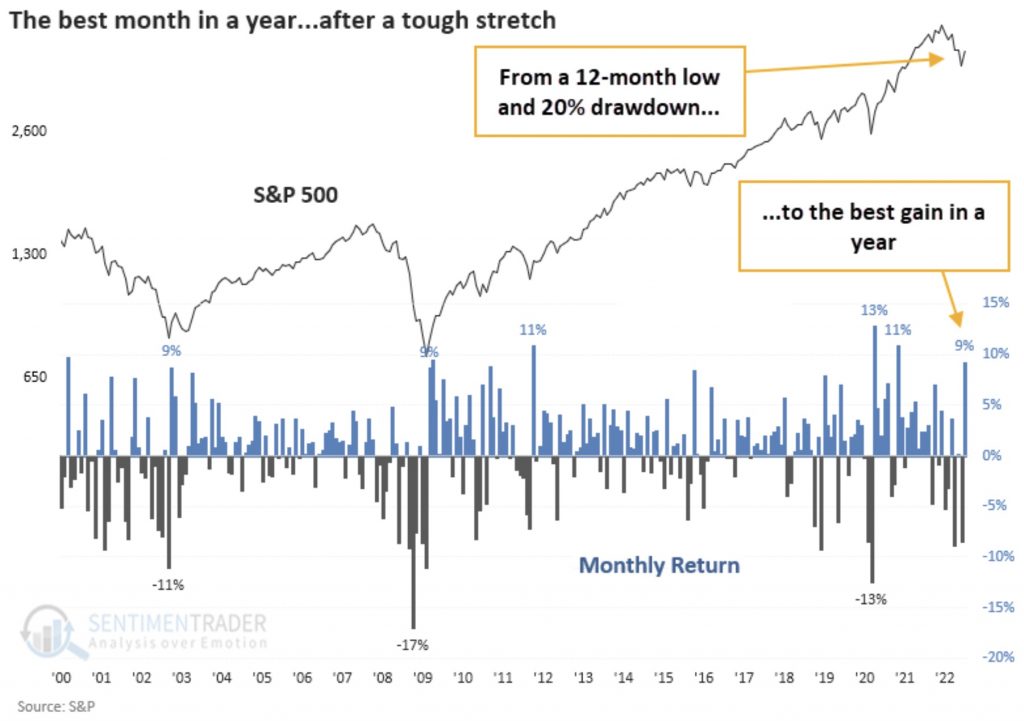 Similar behavior mainly occurred at the ends of bear markets. There were two exceptions, in 1931 and 2001, both of which failed almost immediately. The others may have some shorter-term weakness, but the losses tended to be limited. Over the next 6-12 months, returns and maximum gains were excellent. 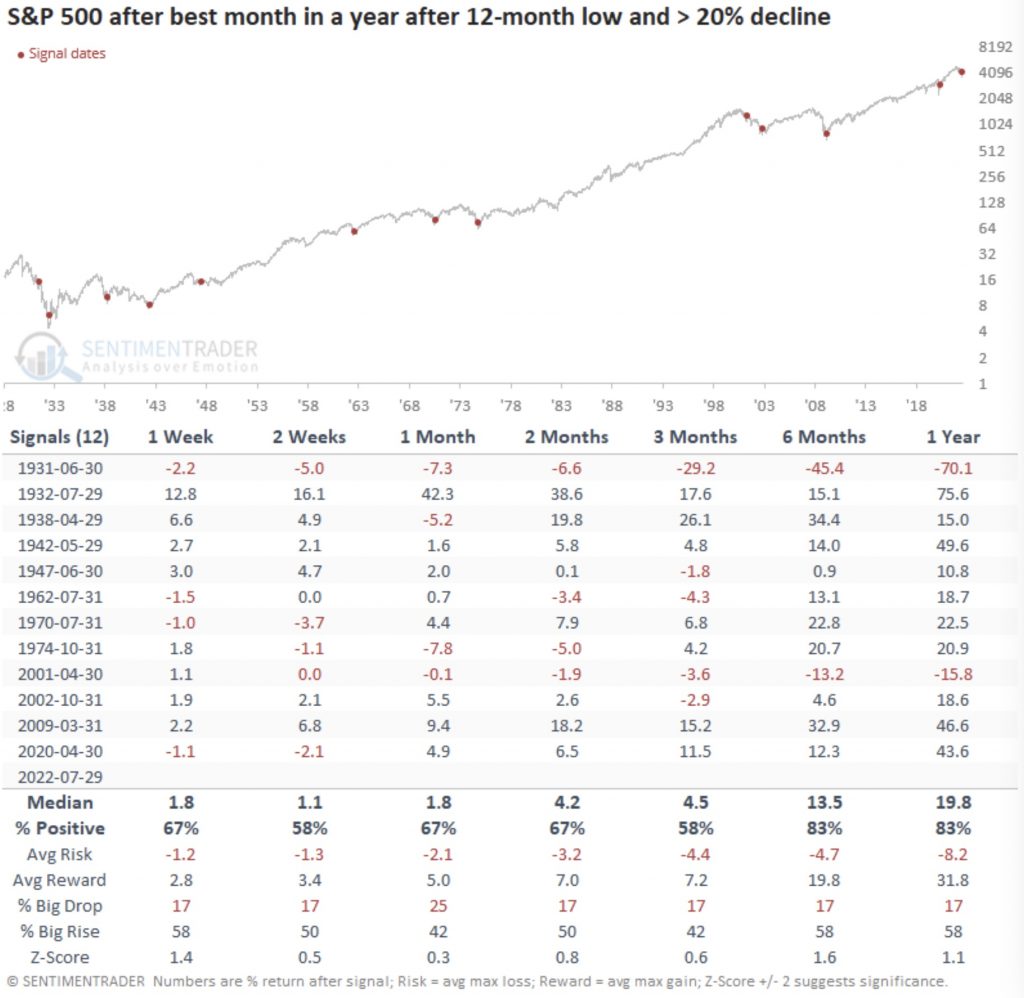 What the research tells us…
The setup was ripe for at least a bear market rally in late June. Sentiment was about as bad as it gets, for as long as it gets before dip-buyers tend to step in. And they did, aggressively. That triggered some thrust-y signals a month ago, and unlike others over the past six months, buyers persisted and triggered even more compelling signals. It’s another sign that this recovery should have legs. This is another example of why Jason Goepfert is the best in the world at what he does – providing actionable market data. To subscribe to the internationally acclaimed work Goepfert produces at SentimenTrader CLICK HERE.