Gold and the mining shares are preparing to blastoff!

UPDATE: Gold & Mining Shares
April 17 (King World News) – Below you can see that the GDX (Mining Stocks) vs Gold have been strengthening. This is bullish action. 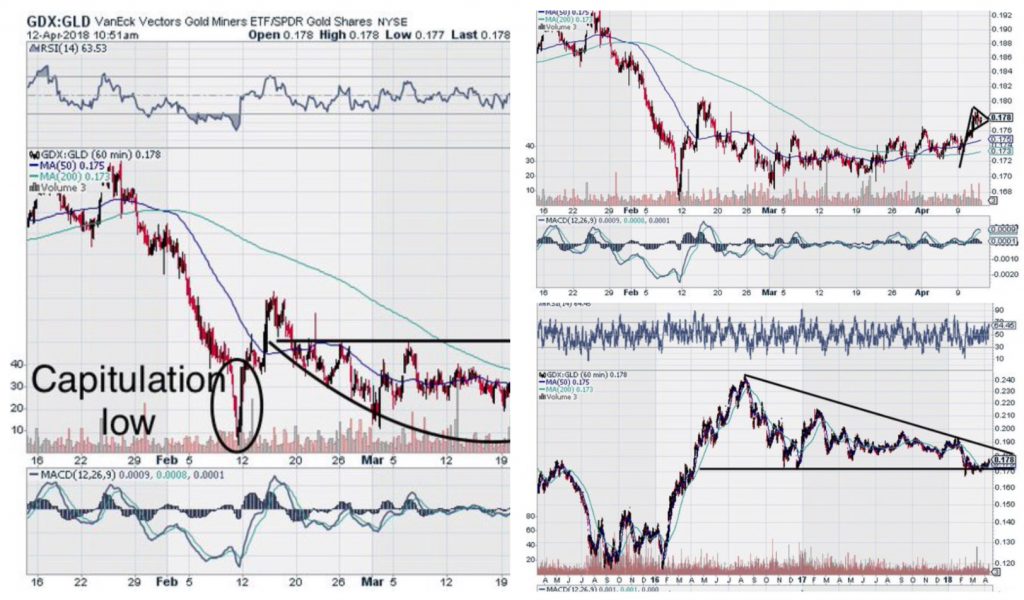 You can see from the chart below that the price of gold has remained above the key $1,300 level for the longest amount of time in the past 5 years.  If the miners can mount another significant advance, that should unleash the price of gold, creating a major breakout from the multi-year inverse head & shoulders formation.

Gold Holding Above $1,300 For Longest Amount Of Time In The Past 5 Years!

The Big Picture For Gold
King World News note: Up to this point the price of gold has been capped on rallies and has remained trapped in a tight range. Games aside, time is running out for the manipulators playing games in the paper market because the long-term charts are incredibly bullish for gold. When $1,400 is taken out on the upside, the real fireworks will begin.

April 17, 2018 Vancouver, British Columbia – April 17th, 2018 – Auryn Resources Inc. (TSX: AUG, NYSE American: AUG) Auryn is pleased to announce that it has completed a long-term access agreement with the Huancasancos Community which covers approximately half of the 2016 Sombrero claims located in southern Peru. The agreement gives Auryn surface access where exploration programs are underway in anticipation of an initial drill campaign. The Company has also expanded its land position by a total of 34,180 hectares through staking ground contiguous to the project area creating a 47,320 hectare district scale land position.

Ivan Bebek, Executive Chairman, stated, “The Sombrero Project represents a major discovery opportunity for Auryn shareholders because of the scale of the project, the high grades observed on surface and and the prolific region in Peru where it is located. Although there has been impressive surface sampling by Auryn, the concessions have never been drilled and we are very excited to be commencing our upcoming exploration programs.”

Sombrero Overview:
The Sombrero property is hosted in the Andahuaylas – Yauri belt and is interpreted to be on the north-western margins of the Eocene-Oligocene aged copper porphyry and skarn belt that hosts the Las Bambas, Haquira, Los Chancas, Cotabambas, Constancia, Antapaccay, and Tintaya deposits (Figure 1). The principle targets at Sombrero are copper-gold skarn and porphyry systems and precious metal epithermal deposits.

Surface Work and Planned Drilling:
The surface work at Sombrero will consist of mapping, soil and rock sampling, trenching and ground magnetics expected to be completed prior to an initial drill program.

The aim of the surface program is to expand upon the previously recognized surface mineralization and to delineate drill targets on the southern half of the project where the Company has secured a long-term agreement with the Huancasancos community. Additional community agreements for the northern portion of the project are currently being negotiated.

Expanded Land Position:
The expansion of the land position is based on the results of a stream sediment survey (Figure 3). An initial one day follow up on one of the anomalous drainage basins immediately to the north of the Sombrero project identified a previously unrecognized intermediate sulphidation system characterized by a hydrothermal breccia zone covering an area of approximately 400 meters by 200 meters. A single rock sample was taken in this area yielding 0.49g/t gold, 285g/t silver, and 1.39% Cu. Auryn’s technical team believes this initial follow-up demonstrates the effectiveness of the stream sediment technique in this region and that it could lead to new discoveries in and around Sombrero project.

Michael Henrichsen, P.Geo, COO of Auryn, is the Qualified Person who assumes responsibility for the technical disclosures in this press release.

ON BEHALF OF THE BOARD OF DIRECTORS OF AURYN RESOURCES INC.

***Also Just Released ALERT: Look At What Else Is Getting Ready For A Major Breakout! CLICK HERE.