Today the man who has become legendary for his predictions on QE and historic moves in currencies and metals told King World News that final and total catastrophe lies ahead for the global currency and financial system.

June 13 (King World News) – Egon von Greyerz at Matterhorn Asset Management (based in Switzerland):  The coming 5-10 years are likely to see asset prices decline by at least 90% in real terms. Yes stocks, bonds and property prices will in coming years collapse. But that’s not enough, the whole structure of society will also fall. There will be no or negligible pensions, there will be no social security system and the standard of medical care will fall dramatically.

So is this another sensational prediction by a Cassandra or Doom and Gloom know-it-all?

100 YEARS OF A FALSE AND CORRUPT HOCUS POCUS SYSTEM
Hardly, it is just the consequences of 100 years of a false monetary system based on corrupt principles, fake money and unlimited credit, only backed by inflated asset prices in a vicious cycle of self-destruction.

All actions have consequences but the creators of our current Hocus Pocus monetary system never worried about the negative effects. And why should they since they for over 100 years have been the major beneficiaries of the Hocus Pocus system they created on Jekyll Island.

The current monetary system was created on Jekyll Island in November 1910 by some influential and disingenuous bankers backed by a couple of duplicitous influential politicians. They were guided by Mayer Amschel Rothschild’s motto – “Permit me to issue and control the money of a nation and I care not who makes its laws.”

The system was based on unlimited debt and fiat money creation. Politicians quickly learned that there was an unlimited source of money that they could tap in order to buy votes.

WIN-WIN FOR THE BANKERS
What a beautiful system! Politicians have access to all the money they need to please the people whilst the bankers both issue and control the money. A real win-win for the bankers with unlimited financial benefits and power by total control of the politicians and the financial system in one fell swoop.

It is only with this ingenious Hocus Pocus scheme that the politicians have been able to increase the US federal debt every single year for 90 years without a financial collapse. And at the same time the scheme has allowed the politicians to stay in power without the system going bankrupt.

US debt to GDP is now at 135%, the highest in history and above the WW II level. The average debt to GDP since 1790 is 35% so the current level is 100 percentage points above that. In the next few years, I would expect the ratio to go substantially above 200% in a banana republic fashion. 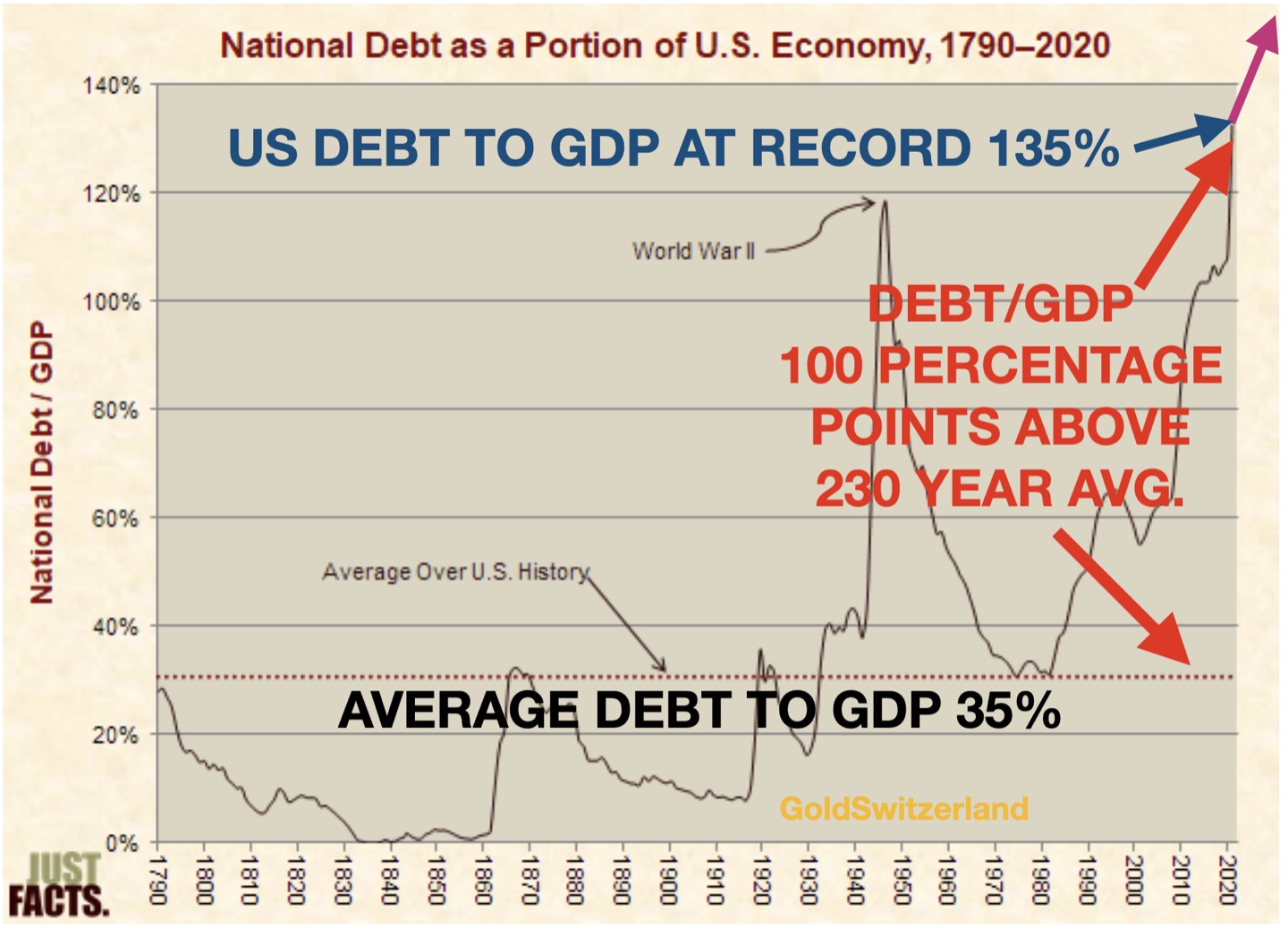 For the sake of good order, let me confirm that there were two years in the 1940s and three in the 1950s when the debt actually didn’t increase. But they were the only exceptions. Don’t be fooled by the Clinton surpluses that actually never happened. Debt continued to increase in the late 1990s and the claimed surpluses were only achieved by moving deficits to debt thus creating the illusion of surpluses. It seems that there are neither honest bankers nor politicians.

WHY WARNING SIGNALS DON’T WORK
So the above Hocus Pocus scheme explains why a country can run deficits for 90+ years. The conventional red warning signals of deficits and debts leading to economic collapse are temporarily not functioning. Almost 100 years of disequilibrium, with the conventional laws of nature such as supply and demand seem set aside, seems longer than possible.

Thus for a period, manipulation, deceit and the will of the people to be fooled can be stronger than the natural laws of nature. The warning signals can therefore be ignored as the momentum of debt and deceit can, by its sheer force, drive the system forward. That is, until the whole Hocus Pocus scheme dissolves itself by the pure weight of the falsities.

All this has happened many times before, for example during the Roman Empire when it took 100 years between 180AD and 280AD for the Silver Denarius to lose 100% of its value and silver content.

So there are always CONSEQUENCES as history proves!

CURRENCY DEBASEMENT TO ZERO NEXT
And history gives us a good indication where we currently are in the cycle. If we take the creation of the Fed in 1913 as the start of the current monetary system and Nixon’s seminal decision to close the gold window in 1971, as the beginning of the end, we are now in the end game.

We could easily point to the economic, political and social decadence as clear evidence of the coming global collapse. But the easiest method for measuring where we are is obviously the debasement of the currencies.

So the destruction of money is now accelerating in parallel with the deficit and debt expansion. This is the typical course of events for the end game.

As the currencies collapse, debt explodes. 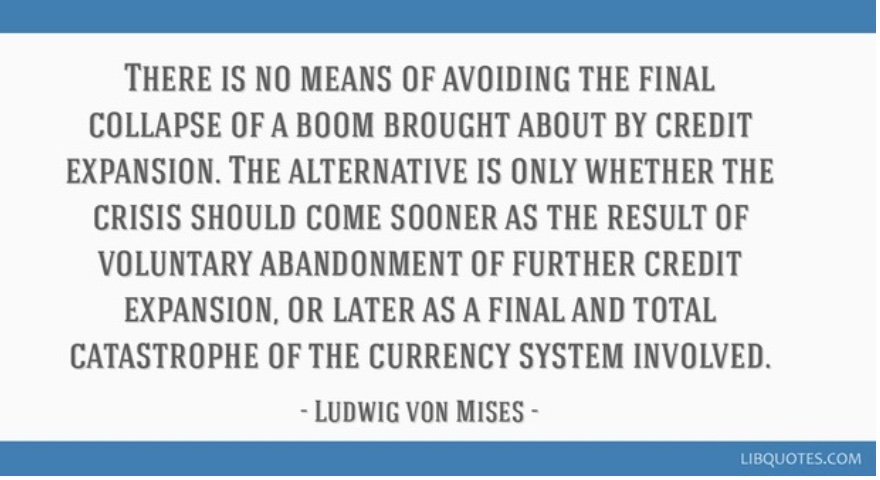 Presidents and Prime Ministers can stand on their soap boxes and tell their people about all their good intentions.

But we mustn’t believe one word of what they say. Because they have forgotten one simple little fact – HISTORY.

Because history would teach them some critical lessons, if their arrogance permitted them to look. They would learn as they reach the end game that global debt of $300 trillion will in the next circa 5 years grow to not just $500 trillion but quadrillions as the financial system reveals its true problems. This will happen as gross derivates of  $1.5 quadrillion turn into debt when counterparties fail. As this happens, banks will also need to be propped up to the tune of $100s of trillions together with most sovereign debt as bond markets collapse and interest rates surge.

BROKEN RECORD
I have written articles, normally weekly, about the world economy, wealth preservation and gold & silver for around 20 years.

I seldom get direct criticism from readers about my articles. The good thing is that no one is of course forced to read them so people can instead vote with your feet.

Some people complain that my message is the same every week. Others enjoy having the message reinforced weekly. Obviously, it is never exactly the same but variations on a theme.

Still, the ones who point out that my message sounds like a broken record are not totally wrong. I would obviously say that it is not a broken record but a record in a constant loop with the same consistent message every time.

From the time I started writing regularly 20 years ago, I have not changed the drift one iota. The piece might be played slightly differently each time but the tenor never changes.

So readers could in essence read the same article over and over again since my message has been consistent for the last 20 years. And it will not change before the cycle has terminated in “final and total catastrophe of the currency system involved.”

The big problem this time is that we are talking about the global system and not just one currency or nation. Because the debt catastrophe today involves both East and West as well as all developing nations. Thus the length and depth of the coming fall is likely to be greater than any time in history.

TESTED PRINCIPLES NEVER CHANGE
Since the essence of my writings is based on principles tested for 1000s of years, they will not change. And as my readers know, the thrust of my message is what every politician and leader should have learnt by now. Sadly they will never learn since they always believe that things are different today.

The message is incredibly simple. Every empire and every country carry within them the seeds of their own destruction. Cycles are infallible, whether they are political, historic, economic or cycles of nature like climate.

Still most leaders believe they can manipulate not only economic cycles but even climate cycles. What they don’t realise, is that in the end the laws of nature will always win.

Going back to empires, like the Persian, Roman, Mongol, Ottoman or British they thrive due to the treasures, commodities or cheap labour they gain access to. The American empire was not based on land grab but on financial and military dominance.

Once empires reach a certain size, they become fat and inefficient. Political and military struggles lead to corruption and living above your means. The only way to manage short term is then to print money and thus debase the currency. As the currency collapses, so do the military and political structures. As the currency approaches zero a hyperinflationary depression normally follows.

The above is obviously a simplified potted version of the economic cycle but very typical. Still, it has major implications for the measures investors must take.

WEALTH PRESERVATION & PRECIOUS METALS
As we reach the end of a major economic cycle, protecting wealth is critical. When stocks, bonds, property and currencies collapse, physical gold and some silver is the best insurance against a failed system.

History tells us that precious metals is the ultimate method of wealth preservation in order to financially survive what is coming. Remember that you don’t have to be wealthy to save in gold and silver. One gramme of gold is $60 and one ounce of silver is $30. So virtually everyone can afford such important insurance for themselves and their family.

Whether gold reaches my long standing target of $10,000 in today’s money and silver above $600, or much higher in hyperinflationary terms, is irrelevant. Much more important is the protection that it will give investors against the destruction of money and asset prices.

But your most important wealth is not material. In periods of crisis the most important values that we must hold dear are family and friends, as well as free treasures such as nature, books and music…This will link you directly to more fantastic articles from Egon von Greyerz CLICK HERE.