With the price of oil in freefall once again, here is a look on the other side of the global collapse, plus a gold and silver update.

Gold Update
April 27 (King World News) – Ole Hansen, Head of Commodity Strategy at Saxo Bank:  The gold net-long stayed within a 180k to 200k lots range for a fifth week with the oil price collapse and stronger dollar triggering a 10% reduction during the reporting week. 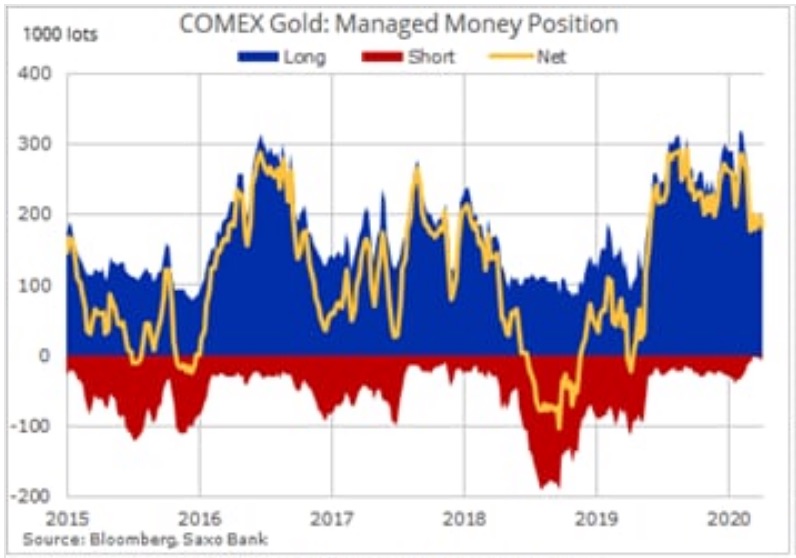 The price briefly dipped to $1660/oz last Tuesday before finishing the week on a firmer footing. Having cut their longs by 36% from the February peak hedge funds seems to be looking for a sustained breakout before adding further length. Investors using bullion-backed ETF’s have however continued to accumulate longs with total holdings continuing to reach new highs.

Silver Update
During the past two months silver has seen its net-long being cut by 80% to just 13.5k lots. 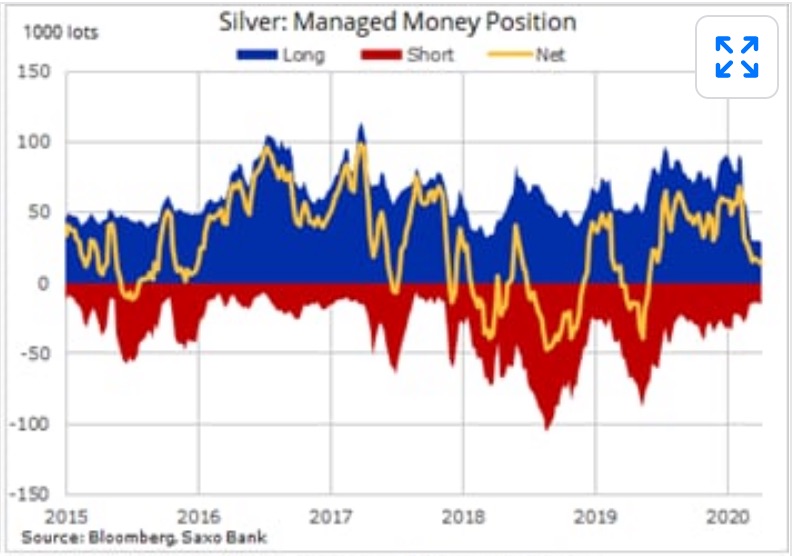 The combination of the global economic slump towards recession raising the risk of lower industrial demand and its often erratic trading behavior has sapped demand. It’s historical cheapness to gold and the risk of covid-19 related supply disruptions are currently two potential positives…

Looking On The Other Side
Peter Boockvar:  The stock market again is looking on the other side of the shutdown as we get more news of things opening up. Whether its the NBA reopening practice facilities or Tesla saying it wants its California factory to open on Wednesday or even NY and NJ saying this week they’ll begin to lay out plans for a May 15th opening of some things or Germany opening some schools today or two states in Australia beginning a partial reopening on Frday, we’ll all see how this goes. Don’t discount the importance and effectiveness of wearing a mask. I will say this, we have to try because we won’t have an economy to go back to the longer we wait. I believe it is most important that medical offices reopen ASAP as we can just imagine the growing danger to one’s health of delayed procedures, delayed check ups, delayed x-rays, delayed CT scans, delayed mammography’s, etc…

Oil Woes Continue
The one thing that is not moving on the hopes of a reopening and more people driving again, it is oil that continues to be overwhelmed by supply and the lack of any place to put it. The front month June contract down 17% seems to want to one to be the next contract that goes below zero. Looking further out to year end however, the December contract is down ‘just’ 2.7% to $27.70.

How Far Will The Fed Go?
With respect to the Fed, I want to hear about how far they will go. They’ve already done a run around the Federal Reserve Act with these special purpose vehicles. How much in corporate bonds will they buy? How much junk paper will end up on their balance sheet? When will a line be drawn as to what more they can do?

BoJ Going Full Monetization And Nationalization
So the BoJ followed thru with the speculation last week and they are going full on monetization and nationalization of the JGB market as they took the 80T yen annual limit on asset purchases. They will also be buying more corporate bonds and commercial paper. As the cost of money and amount of liquidity are not a roadblock to anything, this is pure financing of the fiscal debts and deficits blowing out in response to all the fiscal largess. After falling on Friday by 2.5 bps to back below zero, the 10 yr yield is down another 2 bps to -.035%, the lowest since mid March. Notwithstanding the BoJ again attempting to turn the yen into funny money, the yen is up for a 4th day against the dollar. What’s that then say about the US dollar? The dollar index is down across the board and the euro heavy dollar index is back below 100.

ECB Rigging Italian Bond Prices
Italian bonds are rallying after S&P on Friday did not change its rating and kept them at BBB. The 10 yr yield is lower by 10 bps to 1.74% after trading above 2% last week. You just have to wonder where Italian yields would be, or all other countries in Europe if it wasn’t for the ECB.