On the heels of the Dow breaking back above 20,000 and the U.S. Dollar Index heading above the critical psychological level of 100, today King World News is pleased to present an important update on the war in the gold and mining shares markets from Michael Oliver at MSA. Oliver allowed KWN exclusively to share this key report with our global audience.

By Michael Oliver, MSA (Momentum Structural Analysis)
February 6 (King World News) – Having worked its way in layers through various resistance structures, momentum has now emerged above the zero line/3-mo. avg.  In the January 29th weekend report (page 6), we also noted that a monthly close back over the 3-yr. avg. ($1190.17) would be a reassuring sign.  We got it.  We also said that a daily close in February over $1189 would be a further positive.  That was actually an estimate of where the 3-mo. avg. would be for February, but as it turned out that average rose a bit to $1190.90, and that was overcome on day one of the new month…

Best support now is probably around $1190, not that this emergent momentum situation needs to pull back.  Indeed, if we look at the momentum chart, it seems deserving of more upside post-breakout reward (perhaps to the upper $1250s), before having to engage in a trading pullback. 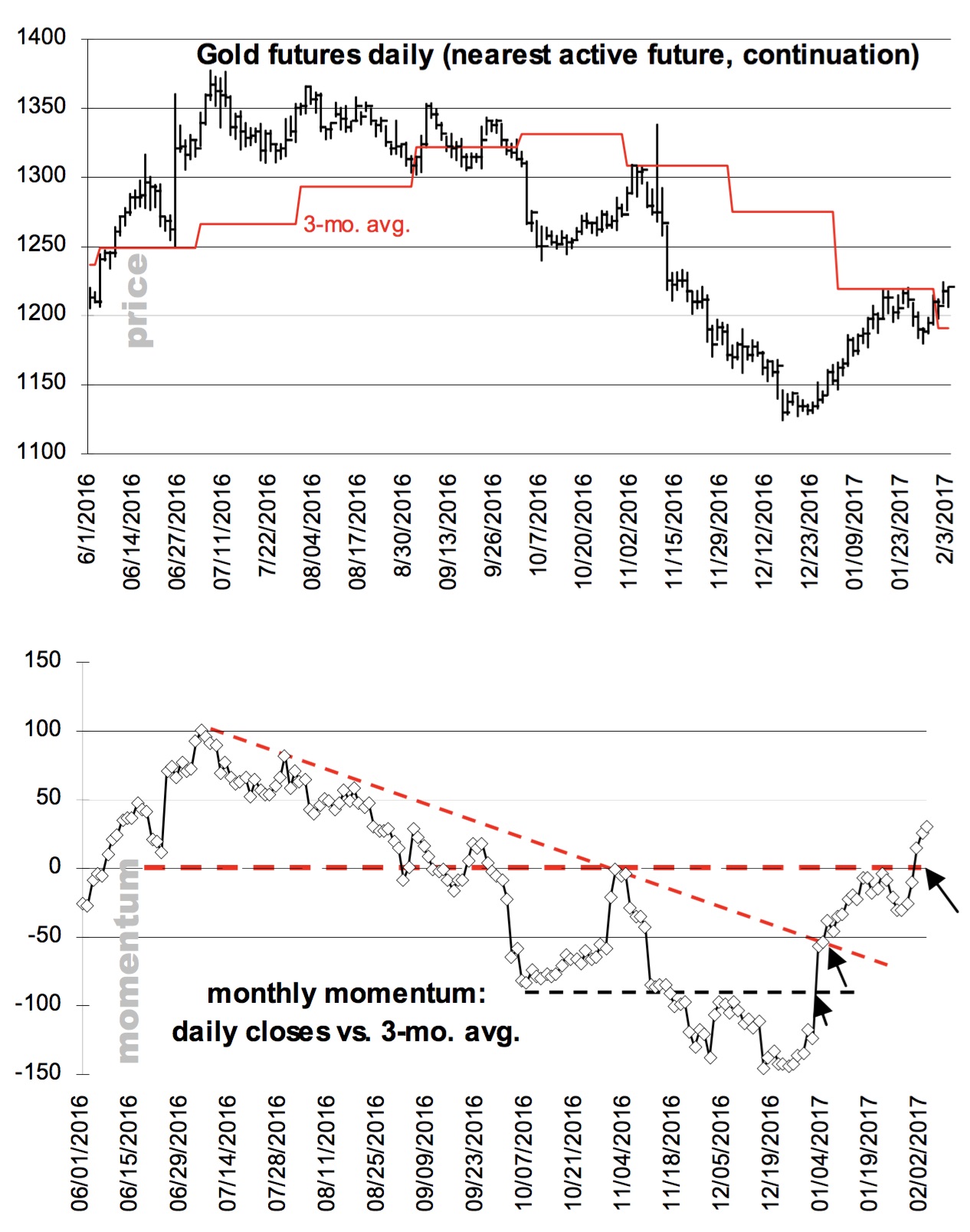 Repeating a number from prior reports: if any time this year gold can touch $1309.18 (to put a fine point on it), that puts gold’s 3-yr. avg. momentum (not shown here) back at last year’s top percentage tick (10% over the mean).  And our experience argues that a return to the top momentum tick in a newly emerged annual momentum trend will likely not pause long at that level, but continue the bull trend.

Relative Performance Of Gold Miners vs Gold
Spreads offer vital technical information, often more important and revealing than other technical features of a market. We don’t rely on simple spread charts, now common on the financial web. A spread is merely a variant of a price chart (one price vs. another) and is equally susceptible to the same deficiencies as price charts. Such as not adequately warning of trend change.

We use the XAU Index as our metric of gold miners here because most gold mining ETFs don’t have sufficient price chart history.

While the spread chart was in its continual state of decline in the latter half of 2015, annual momentum had already begun to shift. It was for this reason, even before gold broke out to the upside in early 2016, that MSA argued that gold miners, despite their long and bedraggled history of underperformance vs. gold, would be a better place to be in a new gold bull trend. This conclusion was based entirely on the momentum of the spread, not on the spread itself, which has since come to life; nor was it based on any fundamental appreciation of the gold miners (see below). 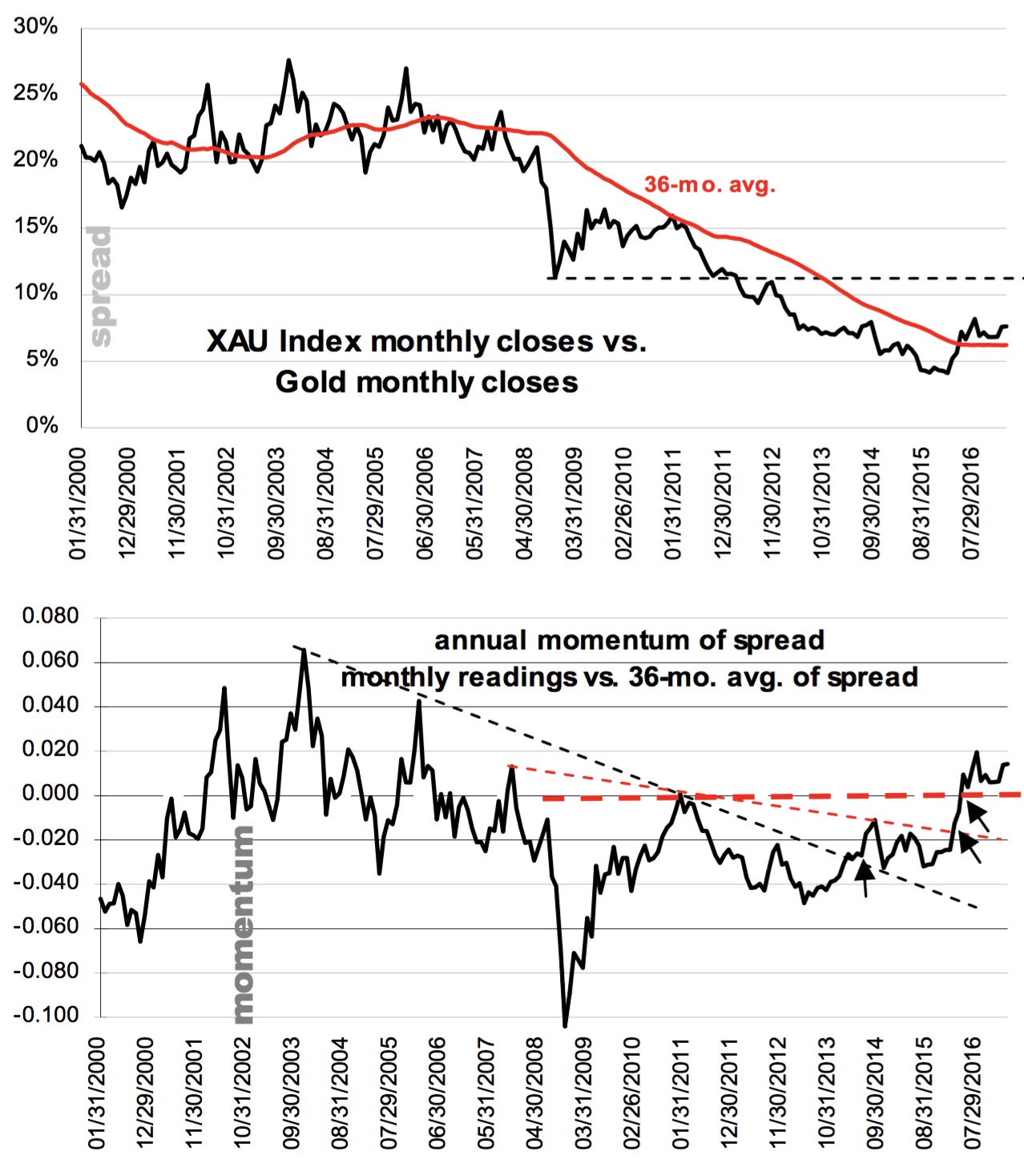 First, a major downtrend on annual momentum (black) came out in that latter half of 2014. Early warning of upside emergence. In late 2015 a gradual three-point downtrend (red) was overcome, and finally a breakout over the zero line occurred in early 2016, thereby moving above all the momentum action going back to 2008! Given the dimensions of the basing action and its upside youth, we think this positive performance by the miners vs. the metal will likely persist for many months if not quarters. We suspect that the next major resistance for the spread (based on the spread chart and referencing prior peak momentum readings) will occur around 12% (XAU’s price rising to 12% of the price of gold). At the lows, XAU was 4.1%; now it’s 7.63% relative to the price of gold.

Profit significance? No, it’s not a mere gain only of a handful of percentage points. If one bought XAU Index (not available as a vehicle, so you bought GDX, but used XAU vs. gold spread as your technical data) in late 2015/early 2016 you would have put on the spread position at 4.5% to 5%. Now at 7.6% you are up by at least 50%, and that’s being long the gold miners while simultaneously short gold. If the spread reaches 12%, then it will have been like buying a stock at 4.5 to 5 and selling it at 12. Not bad for a theoretically “neutral” position which seeks to make money in a positive gold market environment, and yet is short gold.

The point here is not to argue for a position in the spread, but to demonstrate the performance potency of gold miners relative to gold in today’s market.