If We See Some Aggressive Selling Later Today…
June 14 (King World News) – Art Cashin, Head of Floor Operations at UBS:  Today’s Strawberry Super Full Moon appears to be having little impact on helping the bulls.  This morning’s rebound rally was weak and marginal and rolled over was somewhat easy.  Luckily, so far the S&P has stayed above that very minor support at 3725.  We will look to see if the rally fades again.  We could have some problems if the Dow goes below 30,200 and, of course, if the S&P breaks that 3725 and worse, if it breaks through 3700.  The yield on the ten-year looked like there was a minor flight to safety earlier, but that seemed to fade and that brought on new sellers.

Once again, the afternoon will be important.  It will not be helpful if we see some aggressive selling in the afternoon.  So, I guess the fact that it is Donald Trump’s birthday might outweigh the super full moon.

Stick with the drill.  Stay near the newsticker.  Keep your seatbelt fastened and stay safe.

“Blue Horseshoe Loves…”
Peter Boockvar:  Nick Timiraos, a reporter for the WSJ is the new Fed whisperer. It used to be Jon Hilsenrath who was used by both Greenspan and Bernanke to whisper to the markets prior to a meeting the Fed’s intention so as not to surprise the markets. In fact, 10 years ago in a Bloomberg TV interview Stephen Roach said this about Hilsenrath:

“They [the Fed] have gone about their usual pre-FOMC leak frenzy where they talk to this reporter and that reporter. Jon Hilsenrath is actually the chairman of the Fed. When he writes something in the Wall Street Journal, Bernanke has no choice but to deliver on what he wrote…The point is, when they plant a story in the WSJ, and this story has been planted, Jon Hilsenrath is the weed that grows…the guy has a perfect track record.”

Fed Likely To Hike 75 Basis Points
When Nick Timiraos yesterday writes a piece posted at 3:15pm on the WSJ website titled “Fed likely to Consider 0.75 Percentage-Point Rate Rise This Week” and then goes on Scott Wapner’s Overtime show on CNBC an hour later and does not say it was his own personal opinion, you can be sure this was a Jay Powell plant to the press and that the Fed will most likely be hiking its fed funds rate by 75 bps tomorrow. If the case, we should see a sharp rally in long end bonds that will lead to an inversion of the 2s/10s spread but something that is needed for now to control the rapid rise in long rates. Stocks should see a relief rally too if the case.

What will end up happening? The Fed almost has no choice now to hike by 75 after this article I believe as the short end of the curve has now adjusted for it. See the chart below at the 2 yr move after this article was posted. If they don’t, you’ll see another round of long end selling. 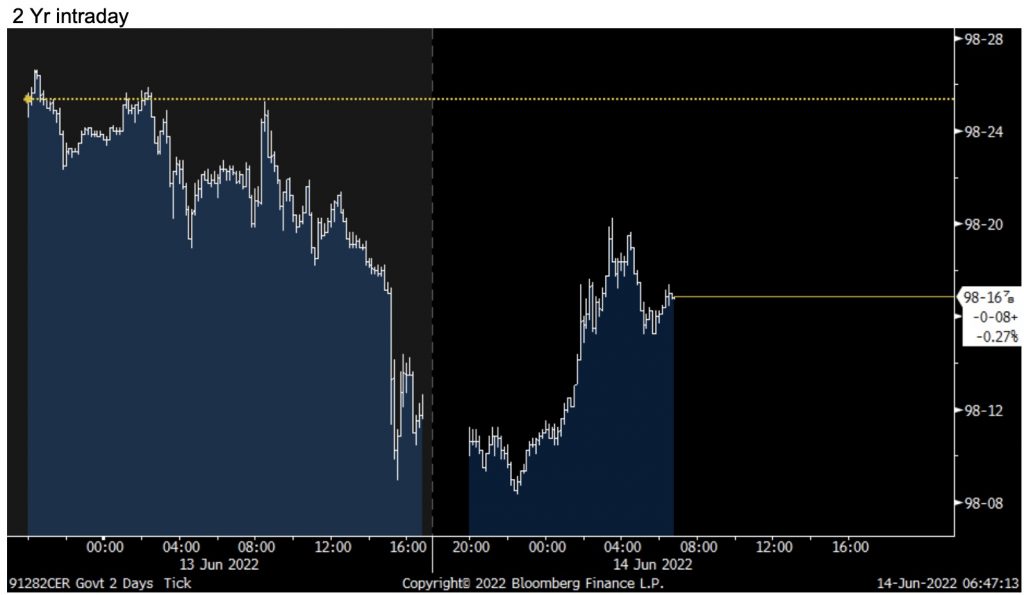 Yesterday the NY Fed said the May median one yr inflation expectation survey saw an increase to 6.6%, up 3 tenths from April. There was no change in expectations for the coming 3 yrs at 3.9% though. With expected earnings growth running below these figures:

After ticking slightly above the .25% yield control curve the Bank of Japan overnight reloaded their QE in a big way and also extended out the maturities of it to 25 years as Kuroda continues to sit on that yield beach ball in the pool. The 10 yr yield fell almost 1 bp in response to .249%. How much longer can this continue is a really important macro question for the world’s bond markets and in turn stocks and something you’ve heard me say before. The yen is lower for an 11th day in the past 12.

The more hawkish ECB member Klaas Knot said today that after they hike rates by 25 bps in July, “If conditions remain the same as today, we will have to raise rates by more than 25 bps” in September. European bond yields are higher again with most of the selling in the peripheral countries. In other words, more ‘fragmentation.’

The May NFIB small business optimism index was 93.1, basically unchanged with the 93.2 print seen for April but that is the lowest since April 2020. 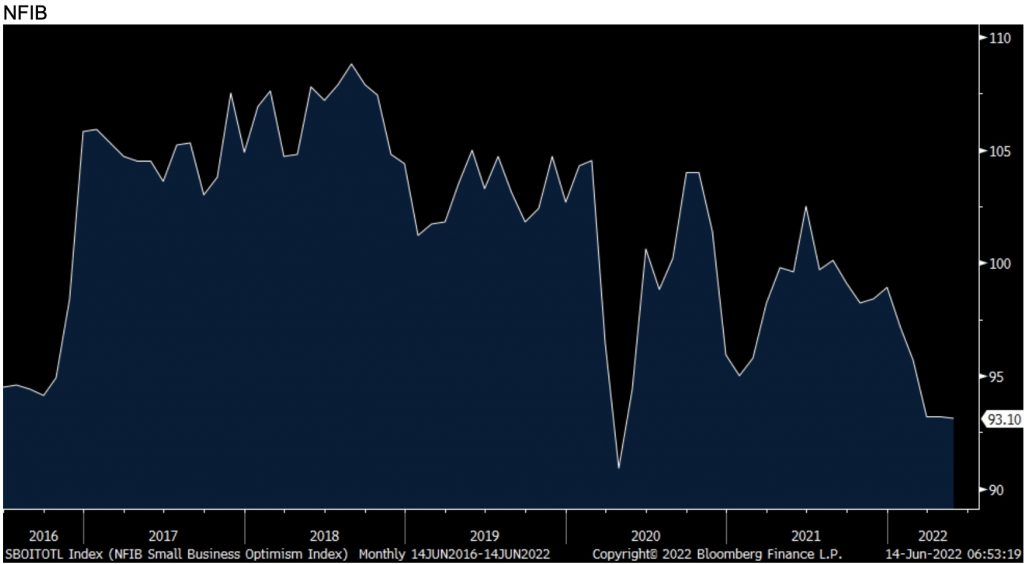 Those that Expect a Better Economy fell to another record low, down 4 pts to -54%. 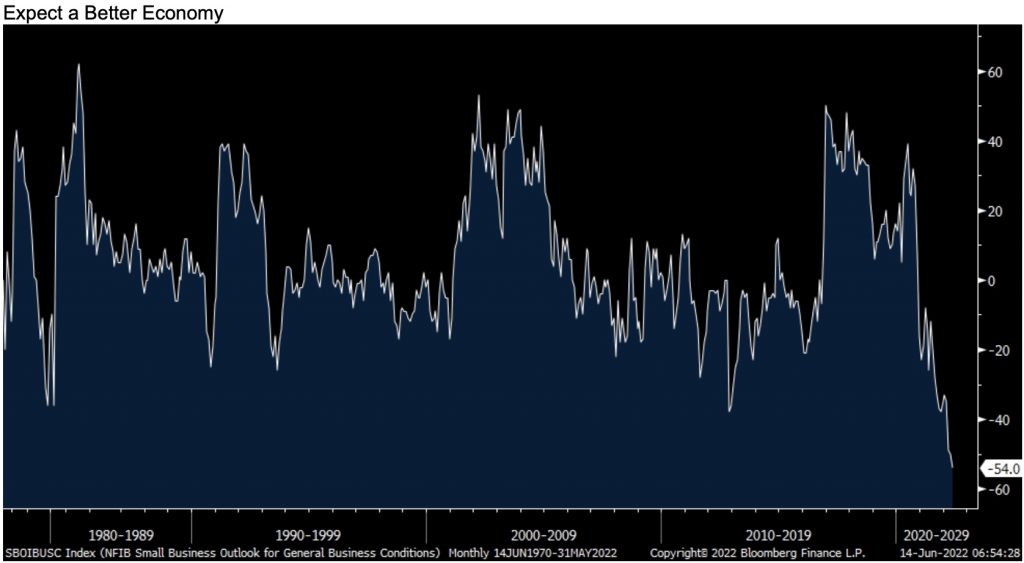 Those that Expect Higher Sales declined by 3 pts to -15. Notwithstanding these responses, there was a 6 pt increase in Plans to Hire even as it was more difficult in filling positions, which fell by 4 pts. Compensation rose to almost back to a high but future plans for comp did slip by 2 pts from April. On pricing, those seeing Higher Selling Prices rose 2 pts to 72 and that is back to a record high dating back to 1974. 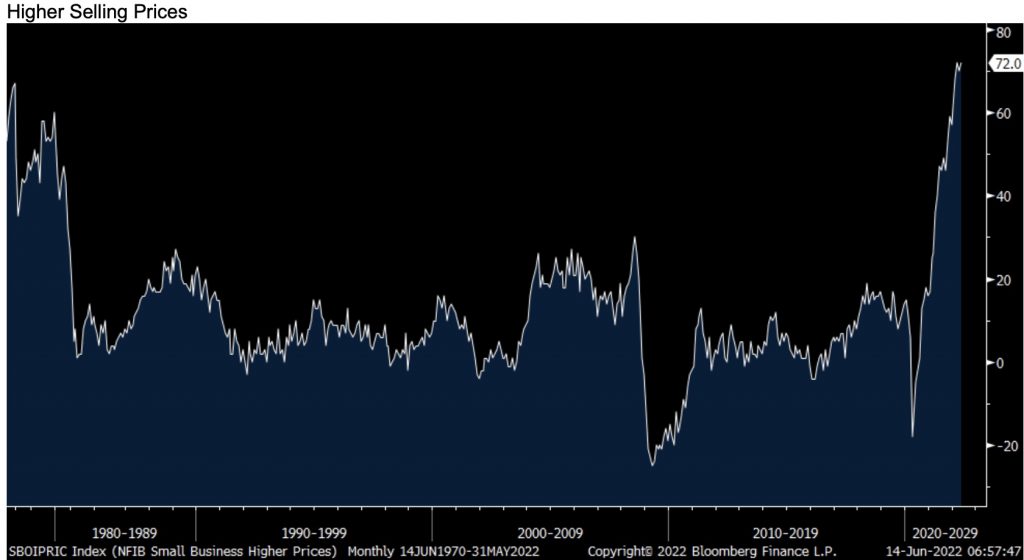 There was a 2 pt fall in Captial Spending plans to 25 which matches the lowest since March 2021. If companies are going to see a squeeze in profits, they have less money to invest in cap ex. On the earnings picture, it softened by 7 pts to the lowest since July 2020.

This deterioration in the earnings picture is the next challenge for stocks generally.

The NFIB’s bottom line says it all but factors we’re all well aware of:

“Small business owners are struggling to deal with inflation pressures. The labor supply is not responding strongly to small businesses’ high wage offers and the impact of inflation has significantly disrupted business operations.”

Germany’s June ZEW investor expectations in their economy improved by 6.3 pts to -28 but -26.8 was the estimate. Current Situations rose by 9 pts to a better than expected -27.6. ZEW said:

“Financial market experts are less pessimistic about the economy. However, the economy is still exposed to numerous risks, such as the effects of the sanctions against Russia, the unclear pandemic situation in China and the gradual change of course in monetary policy. So although expectations have improved, they are still deep in negative territory.”

This number is not market moving but the euro is getting back about 1/4 of what it lost yesterday and the sharp dollar rally.

Stagflation
The UK is also seeing notable negative real wage growth as weekly earnings ex bonuses in April was up by 4.2% y/o/y which compares with CPI that is about 8%. Luckily job growth was better than expected as 177k jobs were added for the 3 months ended April vs the estimate of 106k. Part of this though is the covid reopening. May jobless claims did fall by another 20k after a 65.5k decline in April. With little economic growth and a high level of inflation, stagflation is the word best used here and the pound continues to suffer from it with it falling to the lowest since March 2020.

Gold And Miner Pullback, Plus Up For 13 Straight Years!