GOLD: What More Do You Want? Plus People Worried And Turmoil In The Land Of The Rising Sun

Gold: What more do you want? Plus people are very worried and turmoil in the Land of the Rising Sun.

Gold
March 29 (King World News) – DowGoldEquals1:  Gold with a breakout of a bull flag out of a beautiful cup & handle. All this on a decade+ time scale. What more do you want?

WHAT MORE DO YOU WANT?
Recent Gold Breakout Of Bull Flag
Out Of Beautiful Cup & Handle Formation

Gold
Graddhy out of Sweden:  Right now, that looks like a beautiful Gold reconnection to 50 day moving average, while backtesting close to $1,880 level. 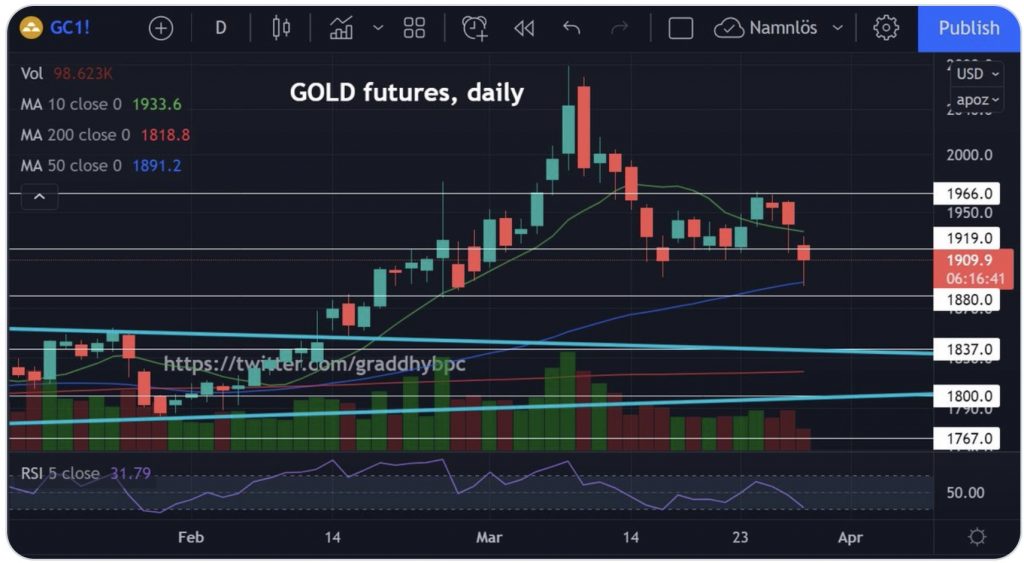 Turmoil In The Land Of The Rising Sun
Peter Boockvar:  While the Bank of Japan held the line on the 10 yr yield at .25% by buying 528.6 billion yen (about $4.3b) in their attempt to maintain their yield curve control, it didn’t stop longer end yields from continuing to rise. The 30 yr yield was up another 5 bps, higher for the 6th straight day and the 40 yr yield jumped by 8 bps to 1.14%. I keep talking about the yen and JGB yields because if the BoJ loses control of its yield curve, it opens a whole new avenue for global bond weakness. Trying to maintain YCC we know, along with spiking energy costs, has driven the yen much lower and the Japanese Finance Minister is again out trying to contain it. Shunichi Suzuki said:

“We need to closely monitor the impact of the yen on the economy with a sense of urgency…We need to keep watching closely to see whether the weaker yen is starting to have a bad impact.”

Well, he’s fighting his own central bank governor in doing so.

He’s trying to contain the yen weakness because it’s only exacerbating their energy inflation problems. Today, the president of Kyushu Electric Power, a major buyer of energy imports in order to power these plants, said:

“The yen becoming weaker is hitting us energy importers because we purchase fuel with dollars. It is extremely worrying.”

The costs of their LNG imports are tied to the price of oil.

Following the selloff in longer term JGB yields, European bond yields are jumping again and why the US 10 yr yield is back to 2.5% while the 2 yr yield is rising by another 9 bps to 2.42%, less than 10 bps away now. The German 2 yr yield in particular is just 2.5 bps from getting back to zero for the 1st time since August 2014.

German 2 Year Yield Back To Zero
First Time Since 2014 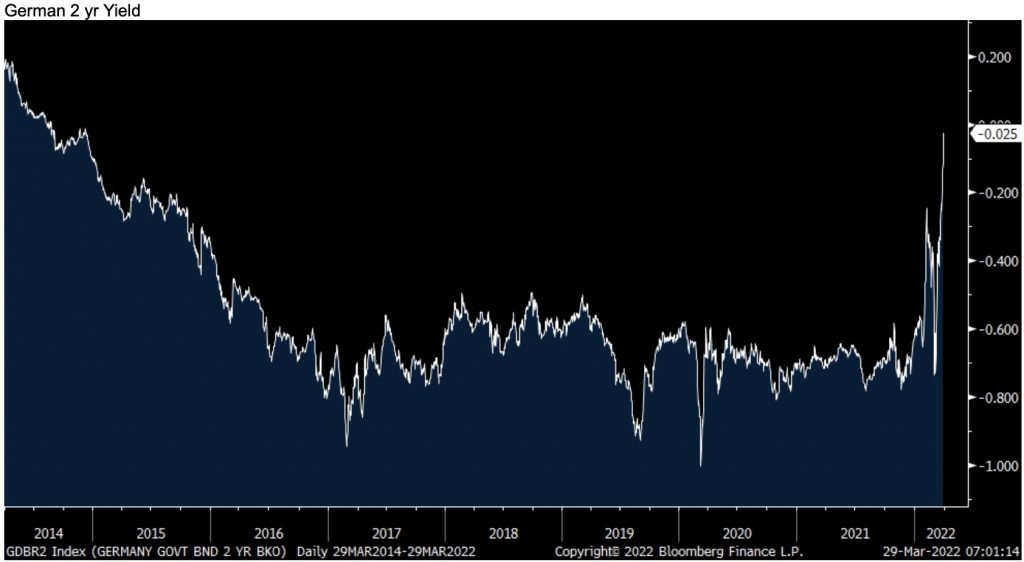 Keep in mind that the ECB first went negative with the deposit rate in June 2014.

We have two former central bankers today that are criticizing the policies of their former employers. Former Bundesbank president Axel Weber, who is currently Chairman of UBS, said in an interview on Bloomberg with respect to the ECB raising rates:

“I really don’t see why it needs to wait till December. Earlier actually can avoid dramatic action later, I think they have to acknowledge the problem and get going.”

We’ve Misjudged The Situation
He specifically honed in on the MAJOR ECB mistake that ‘inflation is transitory’:

“Why does it take nine months to acknowledge there is an inflation problem that is more persistent than they anticipated and to say ‘kudos, we’ve misjudged the situation, we have to act now.’ “

Former NY Fed president Bill Dudley in a Bloomberg Opinion piece called out the Fed’s shift to their inflation symmetry path in 2020 and said:

“The Fed’s application of its framework has left it behind the curve in controlling inflation.”

That’s stating the obvious but he then followed by saying:

“This, in turn, has made a hard landing virtually inevitable.”

The underline is mine. If I had a dollar for every time I said wanting higher inflation to offset a period of low inflation was a TERRIBLE idea I’d be able to buy an ounce of gold…

Vietnam Booming
Vietnam, a growing global manufacturing presence, said March exports rose by 14.8% y/o/y, more than the forecast of up 10.8%. They increased their exports of electronics, fuel, certain foods, plastics, papers and textiles of note. Imports grew by 14.6% y/o/y, just below the estimate of up 16.4%. I remain bullish on Vietnamese stocks. The Ho Chi Minh index was up by 36% in 2021 and is flat this year.

But Germany Imploding
German consumer confidence fell to -15.5 from -8.5 and that was 1 pt worse than expected. 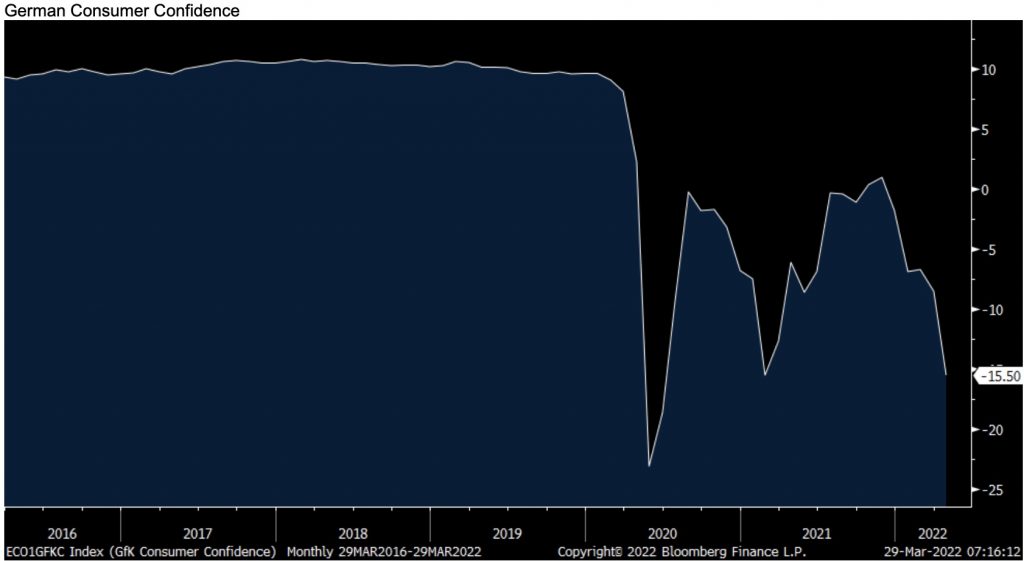 We can of course blame much on the war and the subsequent spike in energy costs. GFK said:

“While the propensity to buy recorded moderate losses compared with the previous month, the economic and income expectations slumped, in part registering new record lows following the 2009 financial crisis.”

How are consumers responding to the jump in their cost of living and what it means for consumer sentiment? “A sharp increase in the propensity to save in March further reinforces the downward trend” in confidence. The ‘income expectations’ component lost 25 pts to the lowest since January 2009.

“Consumers are seeing their purchasing power melt away as a result of the sharp increase in prices when it comes to gas, heating oil and gasoline.”

Not surprisingly French consumer confidence for March was also softer, down 6 pts m/o/m to 91, 3 pts less than expected. The ‘Personal Financial Situation’ component declined by 16 pts to the lowest since 2014. The ‘Standard of Living’ component dropped by 21 pts to the weakest since November 2020. The same worries as the German citizenry obviously apply here but at least the French didn’t shut down their nuclear plants and still get about 70% of their energy needs from them and thus making them much less reliant on the Russians.

Bottom Line: Recession
Bottom line, Europe is headed for a recession, driven by its consumers, and the ECB will still have to raise rates into this because of the poison of NIRP and QE.

Real Estate
S&P CoreLogic said its January home price index rose 19.2% y/o/y. If only a house wasn’t most people’s biggest life purchase, this inflation wouldn’t be that big of a deal. 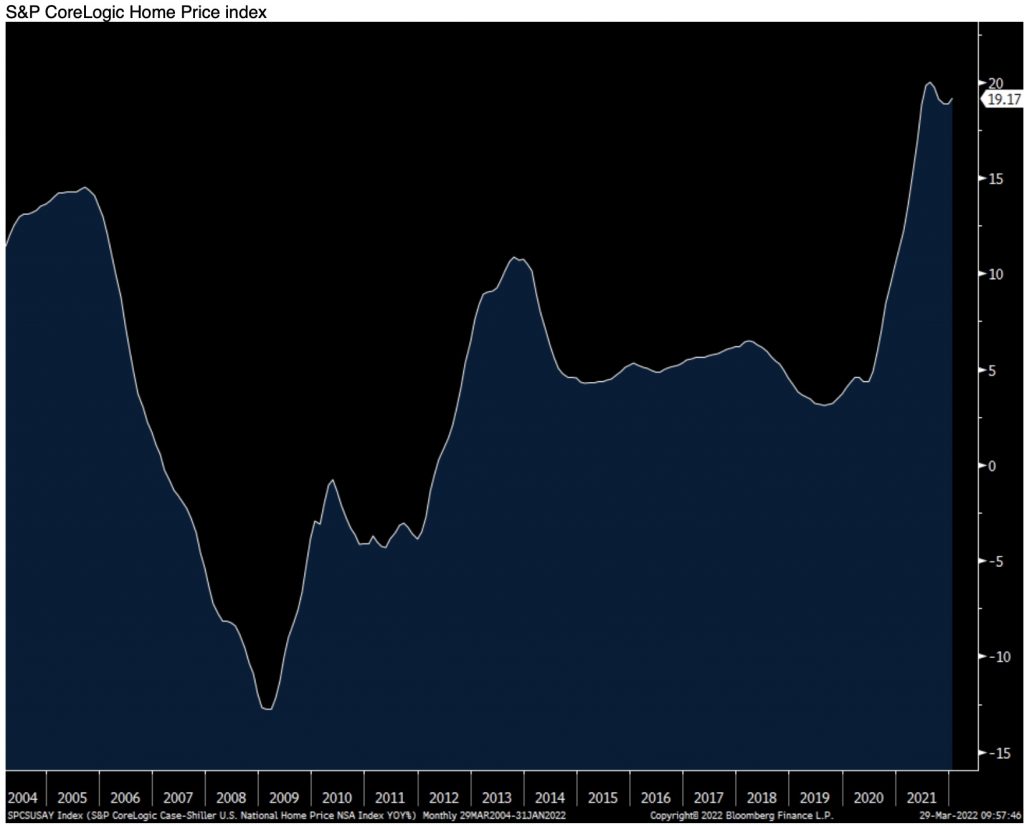 That said, this is likely the peak in the pace of home price gains as in January the 30 year mortgage rate averaged 3.57% vs the 4.86% it stood last night according to Bankrate.com, the highest in 11 years. Quite the rapid move in a very short period of time. 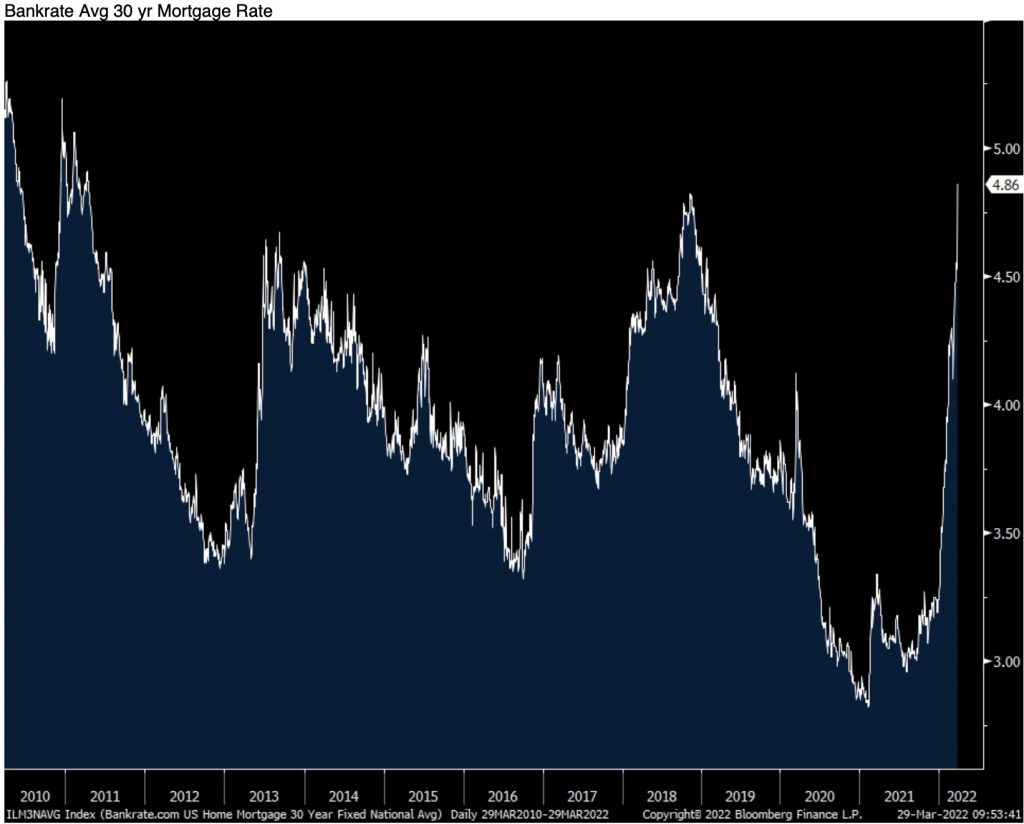 Phoenix, Miami and Dallas led the gains with Phoenix prices in particular up 32.6% y/o/y. DC, Minneapolis and Chicago saw the slowest pace of gains between 11-13%.

The bottom line is obvious, affordability has deteriorated further but hopefully the spike in mortgage rates will dramatically slow this relentless rise in home prices so the first time home buyer can catch a break.

More “Transitory Inflation”
The Conference Board’s March Consumer Confidence index was 107.2, as expected and vs 105.7 in February (revised from 110.5). The components were mixed as there was a 10 pt rise in the Present Situation but a 4.2 fall in Expectations. Of particular note, one year inflation expectations jumped another 8 tenths to 7.9%, the highest since the question was first asked in 1987. 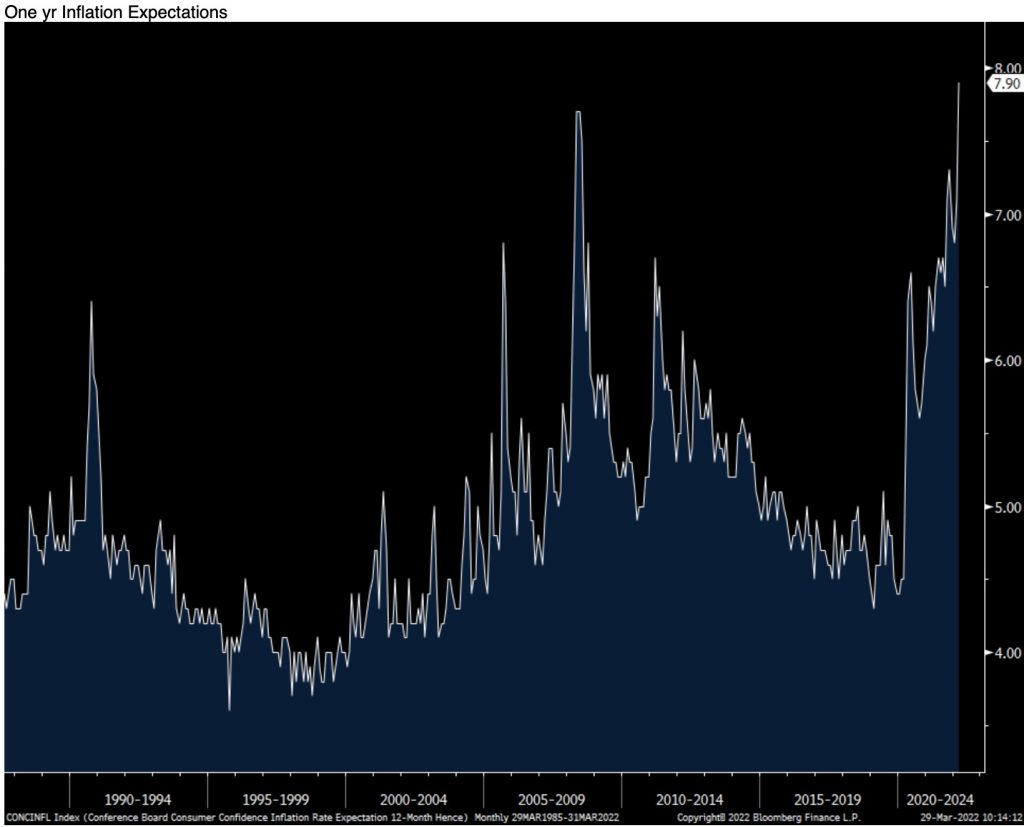 People Are Worried
As seen in other confidence figures, people are very worried about inflation but the positive has been the current state of the labor market. That was seen in this index as well as the answers to the labor market questions got even better for the present situation BUT softened for the outlook. Those that said jobs were Plentiful rose to the highest level on record dating back to 1967. 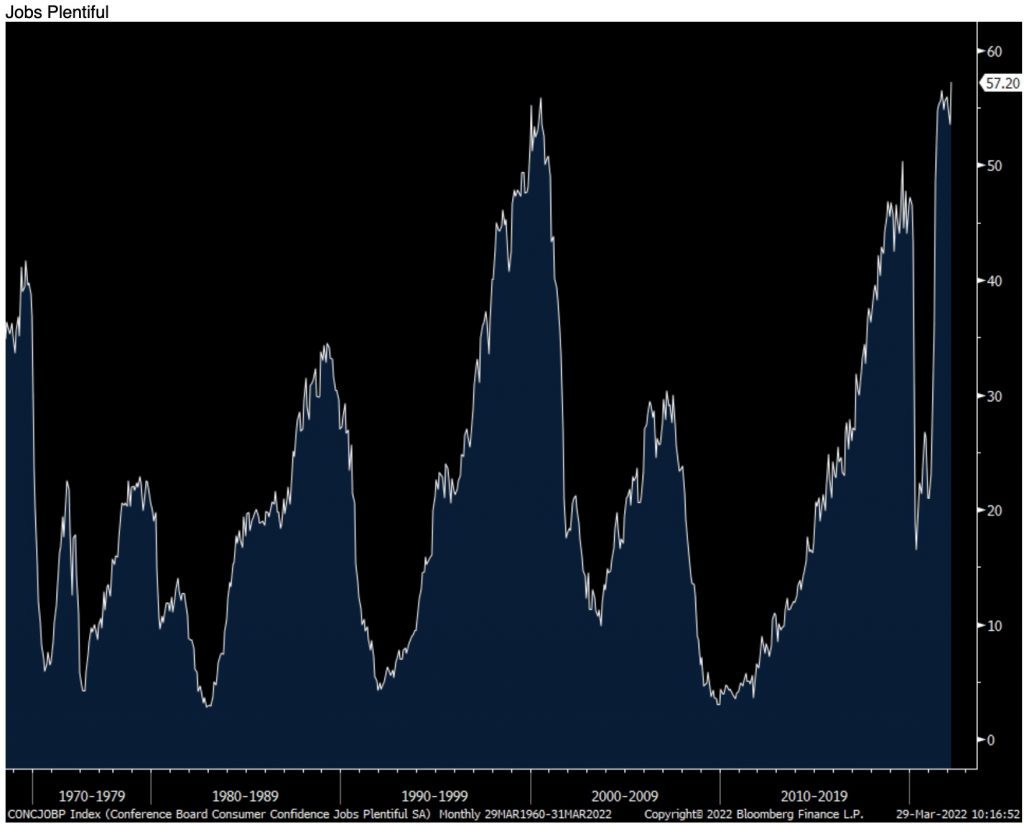 Spending intentions were mixed. Those planning on buying a vehicle fell to a 4 month low but was unchanged for homes m/o/m and rose for appliances after declining last month.