With 2022 around the corner, here is a look at disinflationary propaganda, inflation and real estate.

It’s Tough To Run A Business These Days
December 21 (King World News) – Peter Boockvar:  I’ve argued for a while that just in time inventory management is dead and we’ll be shifting into a new regime where inventory levels for key parts/materials will be higher than before. Here is an anecdote from General Mills (a stock owned by clients and myself) prepared earnings remarks yesterday highlighting the ripple effect from particular pain points in their supply chain:

“When a supplier’s labor shortages limit their ability to deliver a key ingredient to one of our factories, we either need to shut down our lines, or reposition that ingredient from another manufacturing location, both of which increase costs.

Another example, we may be able to procure ingredients, manufacture the product and have it ready to ship. But if our carrier can’t make the scheduled pickup because of a driver shortage, we run the risk of missing our customers’ on-time and in-full deliver window, thus leading to fines and fees. These examples are just a few of the many challenges we and the rest of the industry are facing daily.”

As part of my not transitory argument I’ve also said that companies will be spending at least 2022 and likely 2023 trying to recapture the lost margins due to their spike in costs. They will essentially piece meal out price increases in some form. Walmart for example is not going to accept a sharp increase in price from General Mills in one shot. General Mills said this in their release:

“Already this fiscal year we have announced multiple rounds of pricing across our portfolio, utilizing all four SRM (Strategic Revenue Management) levers: list pricing, promotion optimization, pack price architecture, and mix management. We’re seeing the impact of these actions flowing through in the market, with our average unit prices rising steadily over the course of the year.”

Disinflationary Propaganda
Thus, just because lumber prices go from nearly $1,700 to $1,000 is not an argument for disinflation because it is still up from $300 and builders will still be taking price for a while. Just because copper is down 8% from its May high, it is still up 52% from pre Covid levels. North America hot rolled steel per ton is down 16% from its August high but it is still up 157% from its pre Covid level and auto makers will continue to pass that on. You get my point and higher wages are also a big part of the upcoming price increases, particularly on the services side, that will take time to pass thru. Hopefully transportation prices recede after the holidays but the cost shock relative to where they were pre Covid will still take time to be absorbed and passed on… 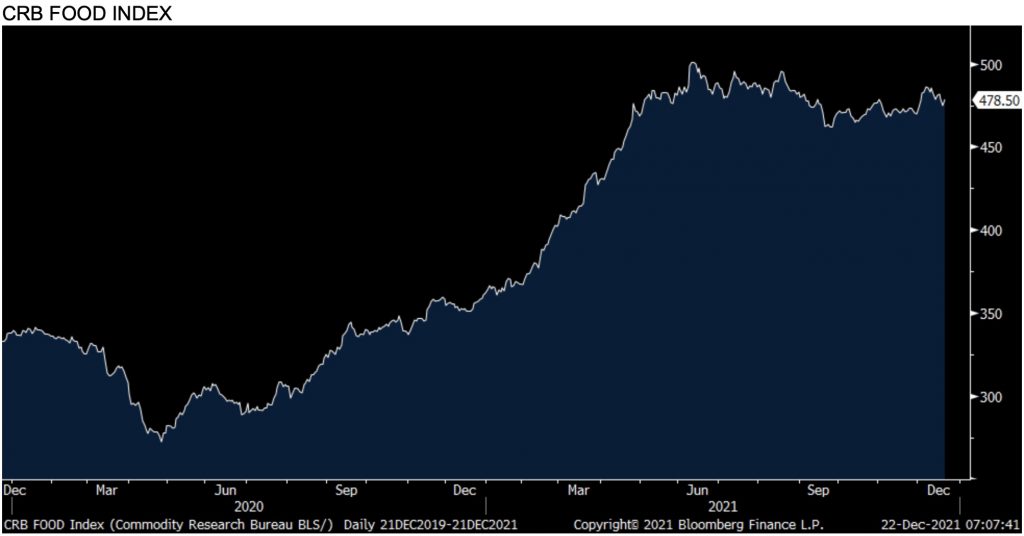 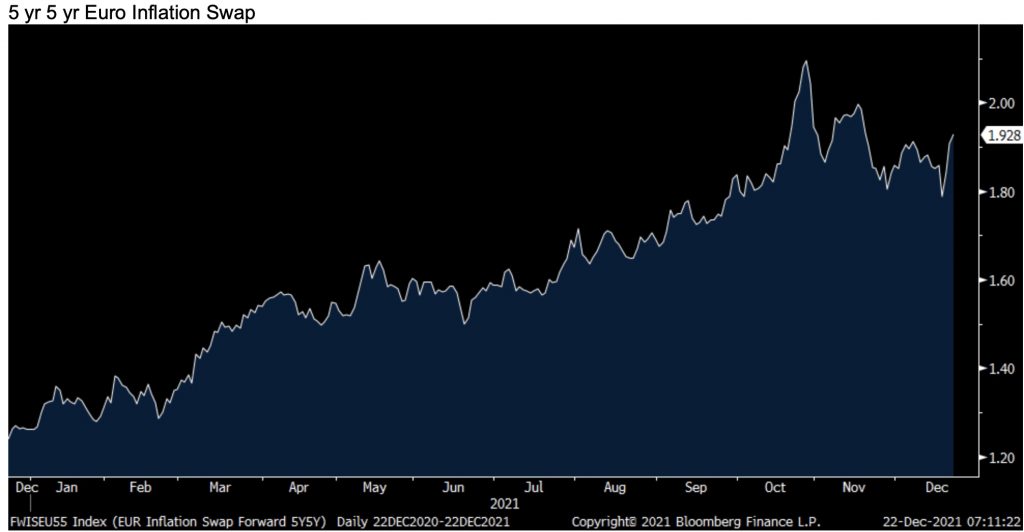 Good luck to Joachim Nagel, the new head of the German Bundesbank in balancing the German repulse to inflation and what is currently going on between the uber dovish stance of the ECB and the inflation reality.

Real Estate
While the MBA seasonally adjusts their mortgage application data, they don’t do a good job and why I ignore the stats around the major holidays. If you still want to see, purchases fell 3.3% w/o/w and are down 8.6% y/o/y. Refi’s rose 2.2% w/o/w but are still down 42% y/o/y. The average 30 yr mortgage rate fell 3 bps to a still historically very low 3.27% but unfortunately the benefits of which have been more than offset by the spike in home prices this year.

Existing home sales in November, mostly capturing contract signings in the August thru October time frame, totaled 6.46mm, up from 6.34mm in October, the highest since January but below the estimate of 6.53mm. 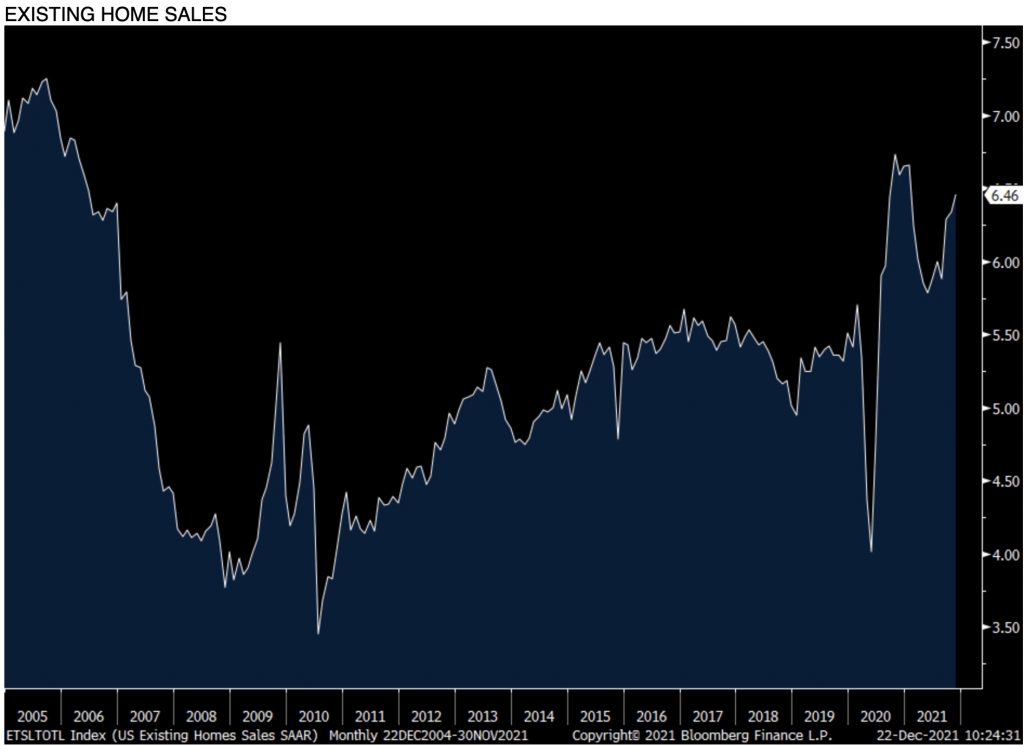 Inventories are still very lean as months’ supply fell to just 2.1 from 2.3 and that is 1/3 the historical average.

Supply Of Homes For Sale Near All-Time Record Low 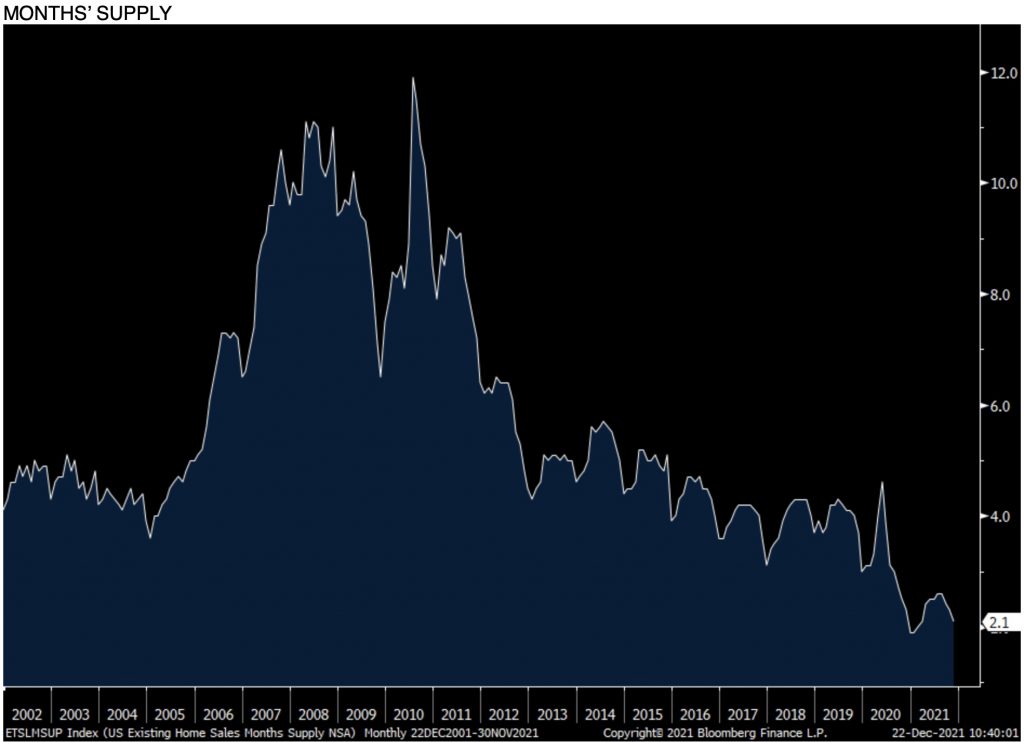 The median home price in turn was up by 13.9% vs 12.7% in the two prior months but this is heavily influenced by mix. I think the S&P CoreLogic metric is better and those are still gaining about 20% but likely topping out.

Unfortunately, those aggressive price increases continue to damage the ability of that first time home buyer to afford something. First time buyers totaled just 26% of purchases, a number I’ve not seen before and it’s no mystery as to why rental prices are spiking too. It was 29% in October and 32% one year ago. Also, natural buyers (those that want to live in the home they buy) are getting muscled out by investors who then plan to either flip it (the iBuyer) or the institution that wants to rent it out.

The NAR attributed the rise in sales to this, “Locking in a constant and firm mortgage payment motivated many consumers who grew weary of escalating rents over the last year.” On the supply side, “Supply chain disruptions for building new homes and labor shortages have hindered bringing more inventory to the market. Therefore, housing prices continue to march higher due to the near record low supply levels.”

While the Federal Reserve and some others like to only blame the supply side for the inflation we have, cheap money via the same Fed has hugely stimulated the demand side for the most interest rate sensitive parts of the economy, housing and auto’s. I don’t think home prices would be up 20% y/o/y if mortgage rates had a 4 handle instead of 3. Tapping on the brakes would better calibrate supply and demand and would allow buyers to afford things again.

Bill Fleckenstein Discusses The Dark Side, What The Fed Is Now Facing, And What To Expect In The Gold Market