For those who are worried about the recent gold and silver takedown, just read this…

Stephen Leeb:  “How high can gold go? I don’t think $10,000 is an outlandish projection – not if gold is the center of a new monetary system, which is where I think we’re headed. Even at $10,000, gold would still be valued at only a relatively small portion of the world’s wealth…

But an even more exciting question to contemplate is how high gold mining stocks can go? As we detail below, over time there have been sharp differences between mining stocks and gold itself. And before reading further, you might want to make sure you have smelling salts on hand, because the potential gains in some miners are dizzying.

The chart depicts the relative strength of gold stocks to gold since the first quarter of 1939, when Barron’s Gold Index of gold stocks, calculated on a weekly basis, began being reported. 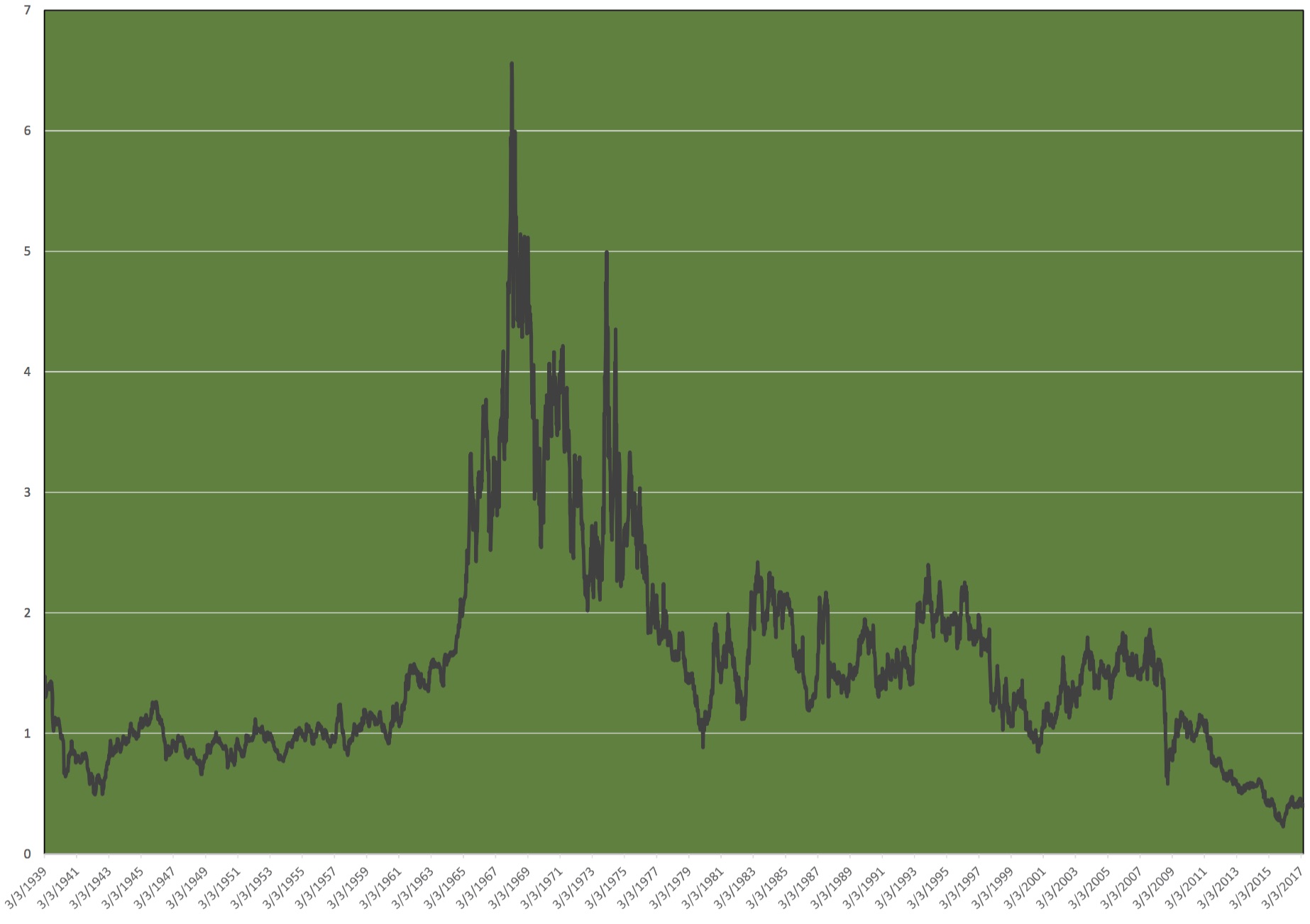 A preliminary observation is that markets are darn smart. Relative strength soared in 1968 when the war in Viet Nam was going strong and President Nixon was urging Fed Chairman Arthur Burns to keep the monetary pedal to the floor to make it possible to pay for both guns and butter. The market clearly understood that when inflation looms, it portends not just rising gold but even greater rises in gold stocks.

Simple arithmetic explains why. If it costs $120 to produce an ounce of gold, and gold climbs 33 percent from $150 to $200, miners’ profits will climb from $30 an ounce to $80 an ounce, a better than 150 percent gain. Generally the higher a miner’s cost, the greater the leverage to rising gold prices.

Other factors also come into play. If investors are not convinced that inflation and gold will continue to rise, miners could fall even though gold has risen. Also, if a mine is positioned to increase its production, that will be positive as long as gold remains above production costs. In 1968, gold prices were fixed but gold mines still soared, rightfully anticipating that crazy money printing would force America to give up on the gold standard. And indeed, in 1971 Nixon abandoned gold as a monetary anchor and currencies were allowed to float. Inflation, which was below 5 percent in 1968, made two trips to double-digit territory during the 1970s as gold soared.

Equally interesting is that when gold made its gigantic leap to $800 in early 1980, the relative strength of gold stocks slumped to what turned out to be a more than generational low, correctly anticipating the zealotry of Paul Volcker that brought inflation down from 15 percent in 1980 to about 1 percent in 1986. While the markets aren’t infallible, they are, as I said, darn smart. 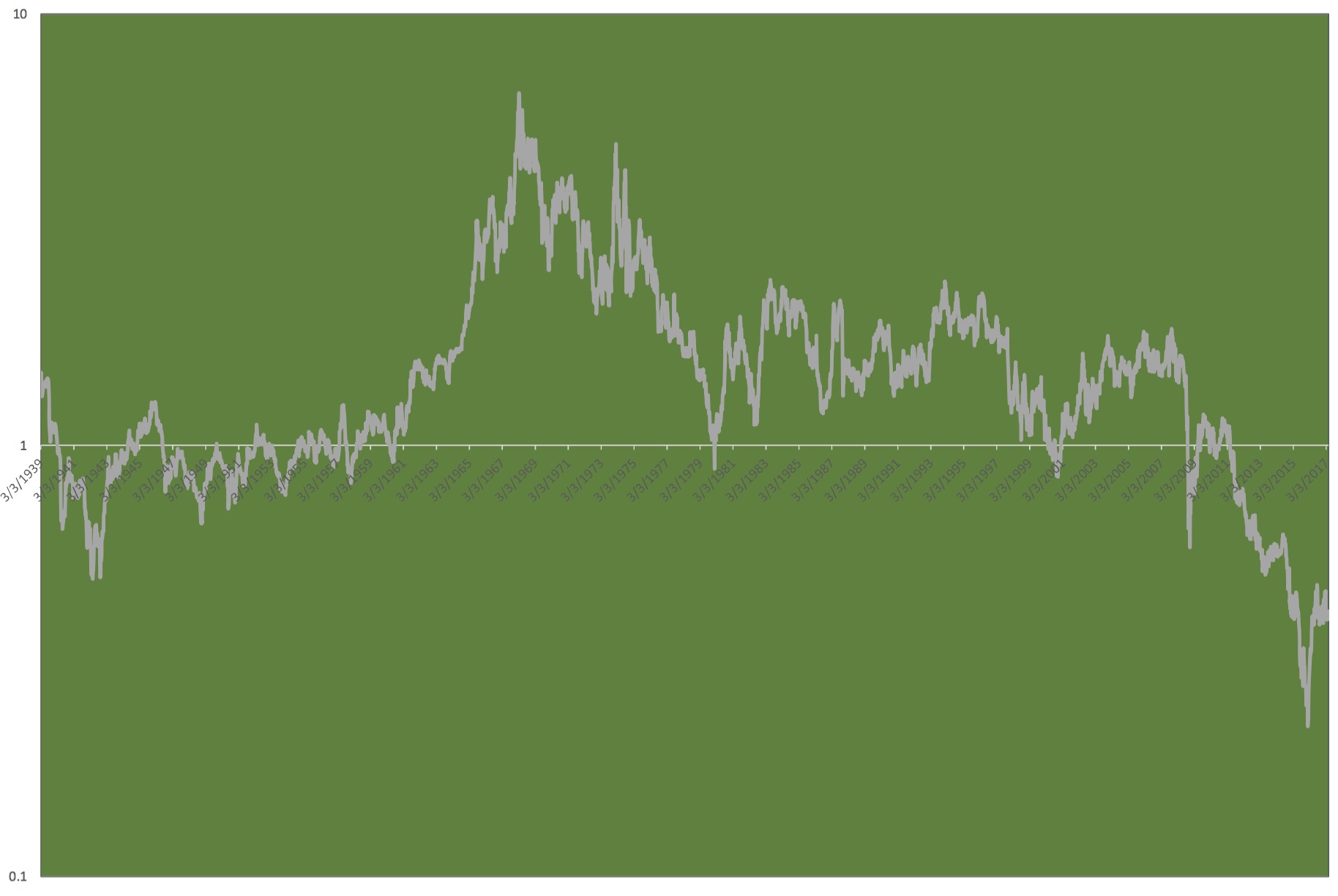 In more recent times, toward the end of 2000, the relative strength of the miners roughly equaled the low point at the beginning of 1980. But this time it coincided with a low in gold – in contrast to 1980, when it coincided with a high in gold – while accurately forecasting declining inflation. Helped by a recession and to some extent 9/11, inflation fell from 4 percent to about 1 percent in 2002. Relative strength continued to rise until the last quarter of 2007 and then started to fall sharply.

Once again, the signal from relative strength was a more accurate forecaster than the stock market or nearly any economist. While stocks and most commodities continued to rise for a few more months as the ratio continued its sharp decline, stocks crashed in 2008, ushering in the Great Recession. About three months before the economy and stocks bottomed, the ratio bottomed, as did gold and gold stocks. The ratio peaked in early 2011 as gold stocks marked a nearly 300 percent gain from their bottom in 2008 but several months before most other commodities made what has proved to date to be an all-time high.

From that brief peak in 2011 the relative strength of the miners plummeted as inflation fell from 4 percent to negative numbers and gold dropped from its high near $1900 to about $1000. From their high in early 2011, gold stocks fell over 80 percent, one of the worst bear markets of any asset in history. But in early 2016 the relative strength of the miners surged. As the price of gold rose, the miners gained more than 100 percent in just seven months, one of the greatest bull moves ever seen.

Gold Stocks To Gain Relative Strength
Since 2017, relative strength has been consolidating with a slight downward bias. I expect this period of consolidation for both gold and the miners will continue a bit longer. In fact, both could fall somewhat from current levels. But I don’t think the miners will lose much in relative strength. If I am right, and gold does start to rally in anticipation both of higher oil prices and of China bringing gold into an Eastern monetary system, gold stocks should gain relative strength. And the gains could be substantial.

To return to its high point of 2011, relative strength would have to triple. To reach the 2007 level, relative strength would have to climb four-and-a-half fold. If gold doubles – a very conservative target – it would mean a six- to nine-fold gain in gold stocks. And if we’re right that gold could reach $10,000, we’re looking at a 24- to more than 35-fold gain in gold stocks. In other words, a stock like Barrick, currently trading at around 16, could climb to 500.

But I’ve been talking so far about the average gold stock. Even those enormous gains could be left in the dust by the junior miners, which have huge gold deposits but no production. Their gains could be truly mind-boggling.

Here Is A Preview Of The Staggering Gains To Come
J. Clark, an analyst for Casey Research, went through past newspapers for examples of how junior golds performed toward the end of the 1970-80 bull market. Starting at yearend 1978, a collection of selected junior gold miners climbed more than 23-fold in less than two years. And that was when the relative strength of the miners was relatively flat. The kinds of gains I envision for relative strength could turn those 23-fold gains into more than 70-fold gains, and in a best-cast basis into 100-fold gains – meaning a $15,000 investment in a collection of top juniors could turn into more than $1 million. Such numbers are why I said you might want to have smelling salts on hand.

But for a cold dash of reality, I have to caution that they are based on assumptions that could go wrong. For instance, while China appears to be on track, it could stumble, pushing commodities shortages and a gold-based new monetary system much further into the future. Even so, it still would likely work out to be positive for gold. For if China stumbles, the world will likely enter a giant deflationary spiral, and more than 500 years of history show that gold invariably gains purchasing power during deflationary periods.

Is 2015 Going To Be The Year Of The Great Inflation?