James Turk:  “As we start 2015, Eric, the key theme for the year ahead will continue to be the financial repression that central planners are wreaking on markets worldwide.  However, there is an important question that remains unanswered and is one that cannot be predicted:  Will the central planners begin to lose their grip in the coming months?  A loss of control is plausible for many reasons.  First and foremost, the credibility of central planners is on the wane….

“For example, over here in London this headline appeared two days ago: 'Economists skeptical ECB bond-buying would revive eurozone.'  It is rare for economists working for mainstream financial institutions to be skeptical of any policy or action coming from central planners.  But we see the same skepticism taking hold in the US.

People are increasingly recognizing that five years of near-zero interest rates and other forms of financial repression have done little to revive the U.S. economy.  If the U.S. economy was really as strong as the bureaucrats in Washington would have people believe, with the falsified numbers they report through the mainstream media, the Fed would have raised interest rates by now.  Instead, the Fed just threatens to raise rates at a future date that keeps getting pushed further into the future.

The Fed’s mind games are just like those used by Mario Draghi.  He keeps talking about launching QE for the eurozone, but nothing happens.  His credibility is sinking even faster than European economic activity.

The point is that the big problem is not being addressed, except in Greece.  The collapse of the Greek economy and meddling by the ECB and IMF — to make Greek debt look serviceable — provide a clear example that the welfare state is no longer a viable political system.  What’s true in Greece is also true for most of Europe, the U.S., and indeed, most other countries around the world.  Economic activity is not going to revive where there are increasing government interventions and escalating taxes.

Politicians have made too many promises that cannot be fulfilled but have borrowed mountains of debt trying to keep their game going.  There is simply too much debt for the economy to handle, even at near-zero interest rates, particularly given the low employment numbers, which is the key measure showing how weak the economy is.  The reality is that over-indebted governments are kept solvent only by the ongoing printing of central banks, which are buying government debt and turning it into currency.

The central planners therefore have two alternatives:  Renege on the debt or destroy their country’s currency.  Those two alternatives have to be kept foremost in mind as we look to the year ahead and decide where to deploy our money.  And it means that gold remains a good place to be, particularly given how undervalued it is.

The fact is that gold had a reasonable year in 2014 as the following table makes clear: 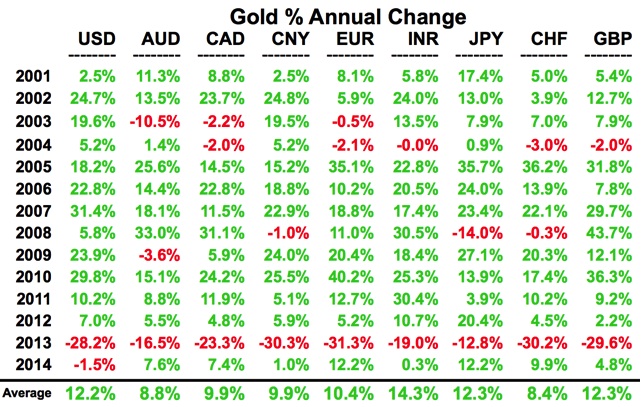 Gold rose against every major currency last year except the US dollar.  And gold only fell against the dollar because of the ongoing price suppression, which was particularly evident the last two days of 2014.

The central planners were there in force at the end of December in order to insure gold closed the year under $1,200.  They managed to achieve their goal because markets are illiquid during the yearend holidays, so it did not take a lot of selling to push gold lower and then keep the price under $1,200.  The strong surge in gold at the start of 2015 shows how contrived the was intervention by central planners.

However, it was a different story last year for silver.  It was down across the board, but that is due to silver’s volatility.  Note the averages at the bottom of the tables.  Since 2000, as good as gold has done, silver has actually outperformed gold (see below). 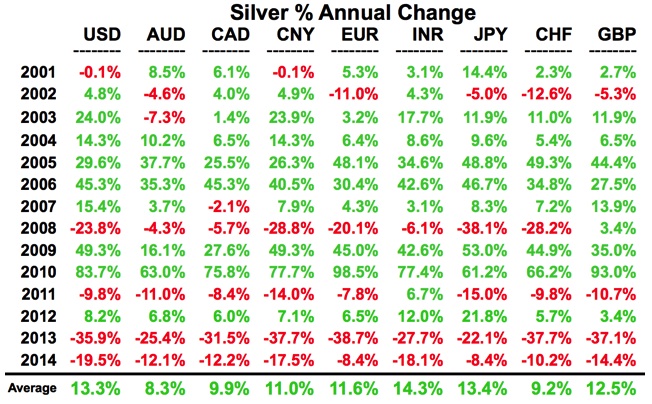 I expect silver's outperformance to pick up momentum in 2015.  The gold-silver ratio will fall as both gold and silver move higher this year.  So as massive as I expect the rally in gold to be this year, silver will climb even higher in percentage terms and continue to outperform gold on the upside.”