Here is a look at gold, bonds, oil, the economy and China shutdown.

Gold & Bonds
June 9 (King World News) – Otavio Costa:  Amazes me how well gold has been holding up despite the bloodbath in global sovereign bonds. Wait until something really breaks in the economy and the Fed is forced to reverse its policy in an already inflationary environment. 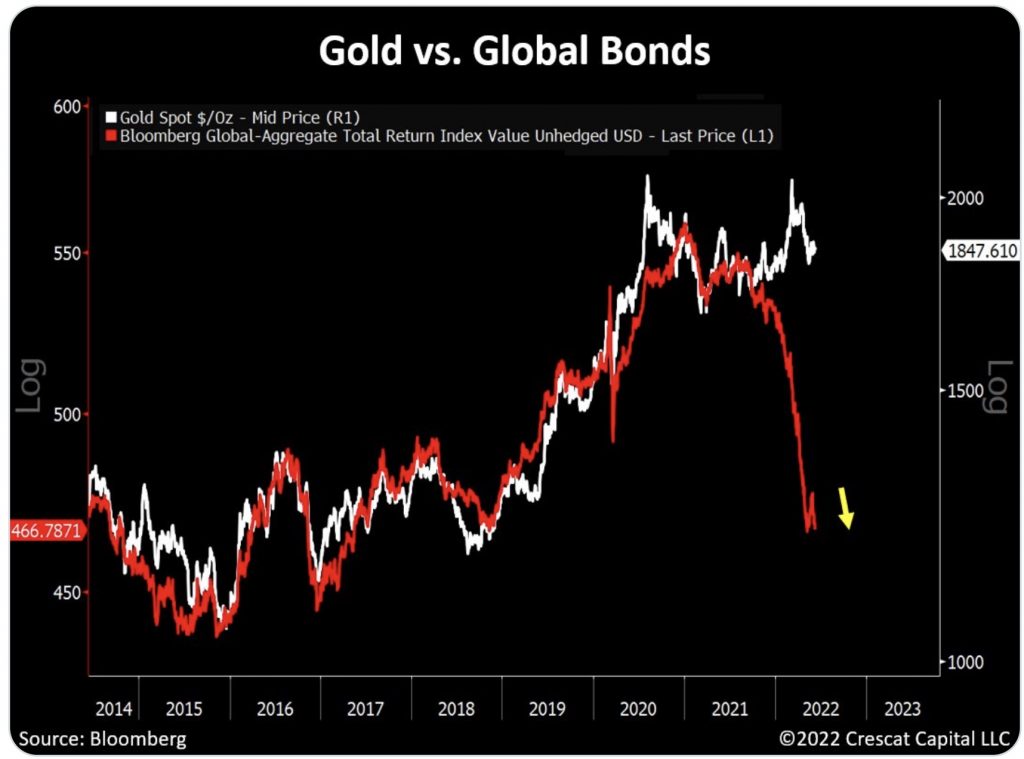 No Soft Landing For The Economy
Peter Boockvar:  If this chart of 2022 earnings estimates is any indication, the sellside assumes not just a soft landing for the economy, but not even a landing as estimates go to a new high. I just don’t see how this possibly can be achieved. 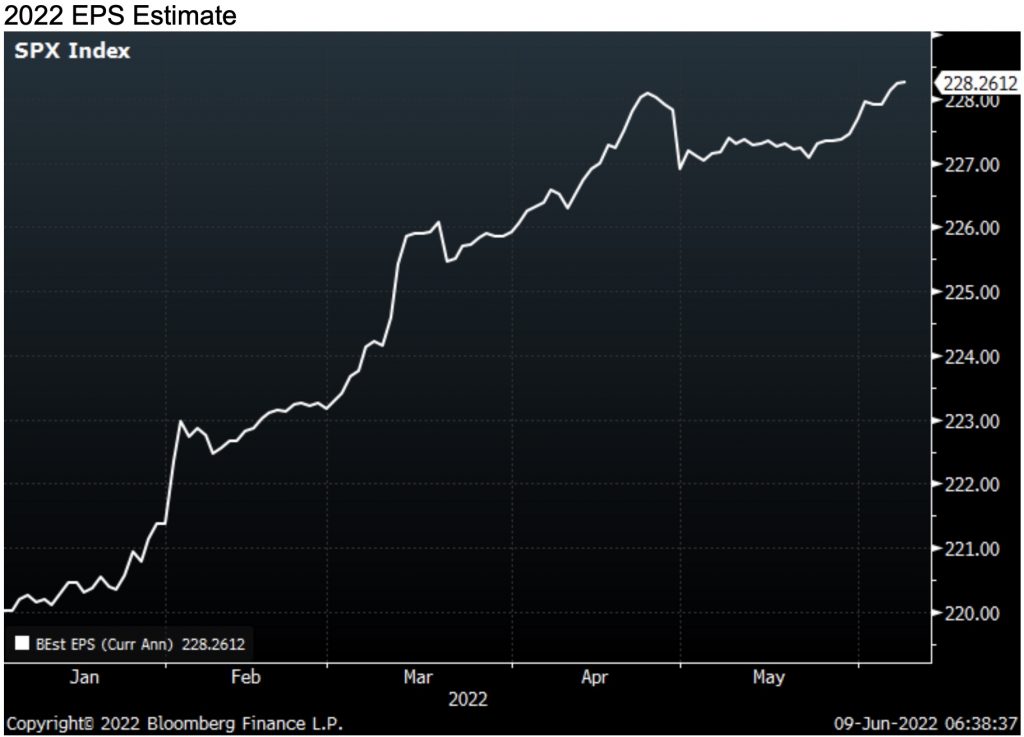 Adding some color to the high level of inventory that many retailers hold of certain goods that consumers overbought over the past two years which in turn retailers continued to over order assuming a continuation in trend, the Logistics Managers Index for May fell to 67.1 from 69.7 in April. LMI said “The downward shift in the index continues to be driven by a loosening in the transportation market, as more capacity comes online and prices decrease…Warehousing and inventory continue to grow at a similar pace to the one we have observed over the last 18 months. Inventory levels are unseasonably high, packing warehouses to the gills and driving costs up for both inventory and warehousing.” Bold is mine.

LMI is also saying that the trucking spot market, where prices have fallen sharply over the past few months, is seeing some stabilization while the contract market still remains firm.

On this excess inventory issue, many are hanging their hat on the expected discounts that are occurring and calling the end to high goods prices. While it likely will market the peak in rate of change, we’ve had Chinese goods production mostly offline for basically two months which means that this inventory clearing could happen rather quickly. And thus I still believe that sticky inflation will last a while, likely settling out at 4-5% y/o/y by year end…

Energy Market Strong
I’ve been bullish and we’ve been long energy stocks since October 2020 (as stated here back then) and when it comes to commodity investing no one ever wants to overstay their welcome and selling early usually is a good strategy. But I just don’t see reason, other than some trimming here and there based on the gains seen, to get out of the energy trade yet. I do grant that sentiment is uber bullish and a correction could happen at anytime but I still believe the surprises will be on the upside, not the downside from here in the next year or two. 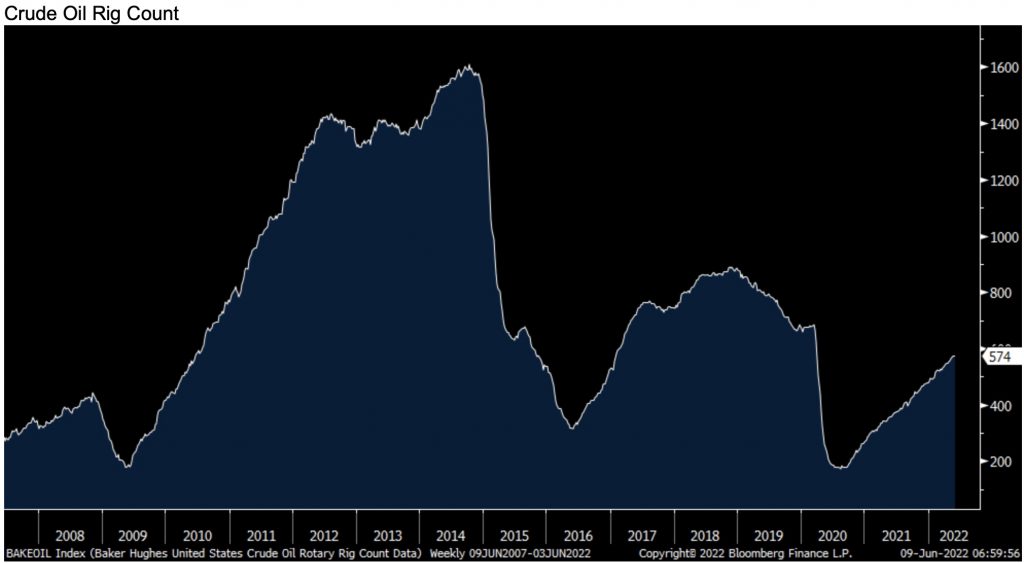 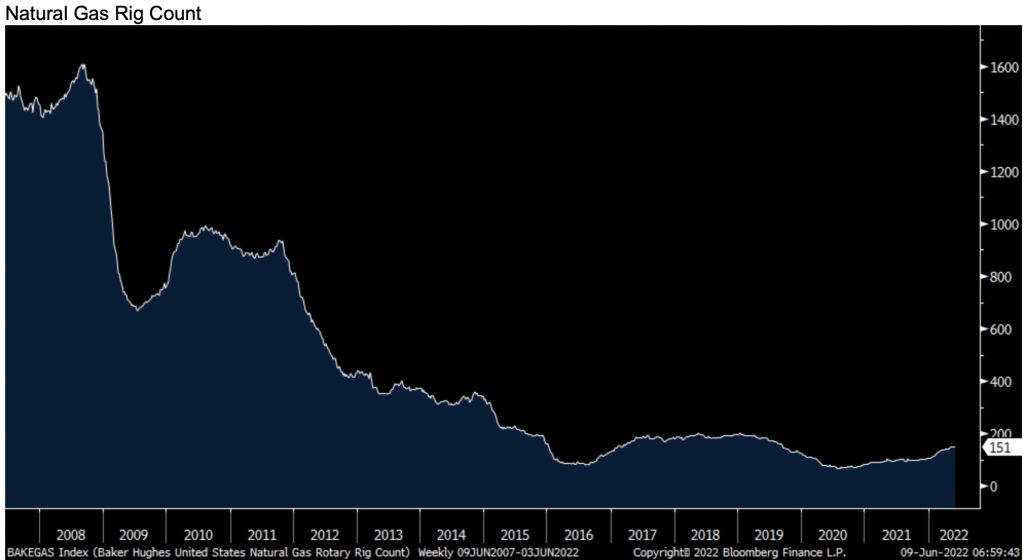 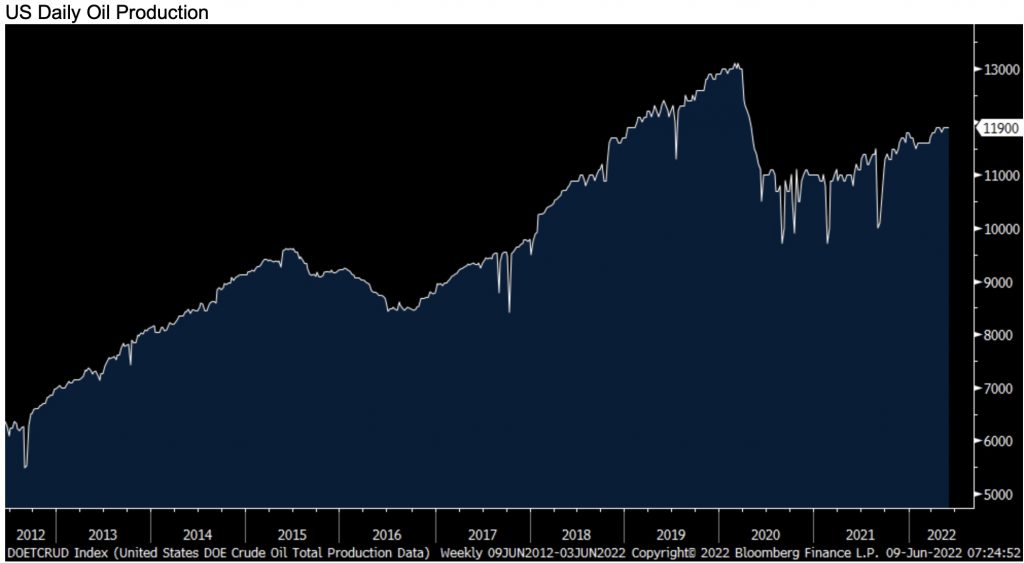 China Shutting Down Some Districts
China did play covid catch up in May with a 17% y/o/y increase in exports, almost double the estimate of up 8%. Let’s emphasize ‘catch up’ here because we know the Walmart’s and Target’s are calling a time out for now on certain items. Imports were higher by 4.1% y/o/y, just above the forecast of up 2.8%. Commodity imports were mostly higher from April. With Shanghai again shutting down some districts, who knows when supply flows fully normalize. Chinese stocks, both mainland and the H shares gave back some of the recent gains overnight.

Bear Still Alive And Well
Market sentiment shifted more bearish over the past week as there was no follow thru to the rally and the 4200ish level has proven to be resistance. While Bulls in the II data did tick up .5 pt to 35.7, Bears were up 2 pts to 40 with a reduction in the number of those expecting a correction. AAII today said Bulls fell 11 pts, giving back almost all of last week’s 12.2 pt rise. They stand at 21. It bottomed this year at 16.4 in late April. After declining by 16.4 pts last week, Bears rose 9.8 pts to 46.9. It peaked at 59.4 in late April. The CNN Fear/Greed index closed at 36, still in the ‘Fear’ category but shifting closer to ‘Neutral.’  Bottom line, sentiment is of course still negative but off the extreme and in the short term I’m in the “I don’t know” camp but still believing the bear is still well alive as we get into the teeth of QT.