This will be the biggest shock for the world in 2016.

Peter Boockvar:  The continued rally in stocks resulted in the highest spread between Bulls and Bears since last August according to II, right before that market selloff. Bulls rose to 47.4% from 41.2% last week and vs 45.4% in the week prior. Instead of coming from the Correction side, those Bulls came from the Bear side where they dropped by 6.1 points to just 21.7%, the lowest since August. I’ve said for weeks that the shift to the bull side made this index no longer a tailwind from a contrarian standpoint but was definitely not a headwind yet. With today’s reading getting stretched again with bulls now 25.7 points above bears, it now becomes so…

Now in the midst of the Spring housing selling season, the MBA said purchase applications to buy a home fell .5% w/o/w but are still up 17.2% y/o/y. Refi applications were up by 2.6% and higher by 13.4% y/o/y. The average 30 yr mortgage rate at 3.83% is exactly where it was one year ago. My definition of a successful Spring for the industry will be defined by a pickup in the buying of homes by first time households above the current level of about 30% of total purchases vs the historical range around 40%. Existing home sales for March will be out today but that will reflect contract signings during the winter.

The Biggest Shock For The World In 2016
With the CRB index yesterday closing at near the highest level in 5 months, I’ll repeat my call again that the biggest surprise of 2016 will be the uptick in the inflation stats in the back half of 2016 and the commodity bear market is over. Oil is of course the daily discussion but metals prices and food are also leading the way. The CRB food index yesterday approached levels last seen in July 2015.

King World News note:  To Peter Boockvar’s point regarding his prediction that the biggest surprise in 2016 being the uptick in inflation stats in the back half of 2016, the charts below are from top Citi analyst Tom Fitzpatrick.  The charts show the clear breakouts on the Continuous Commodity Index (CCI) and the Australian dollar (one of the top commodity producing countries).  This is confirming Boockvar’s inflation shock in the back half of this year and it will be extremely bullish for gold and silver in 2016. 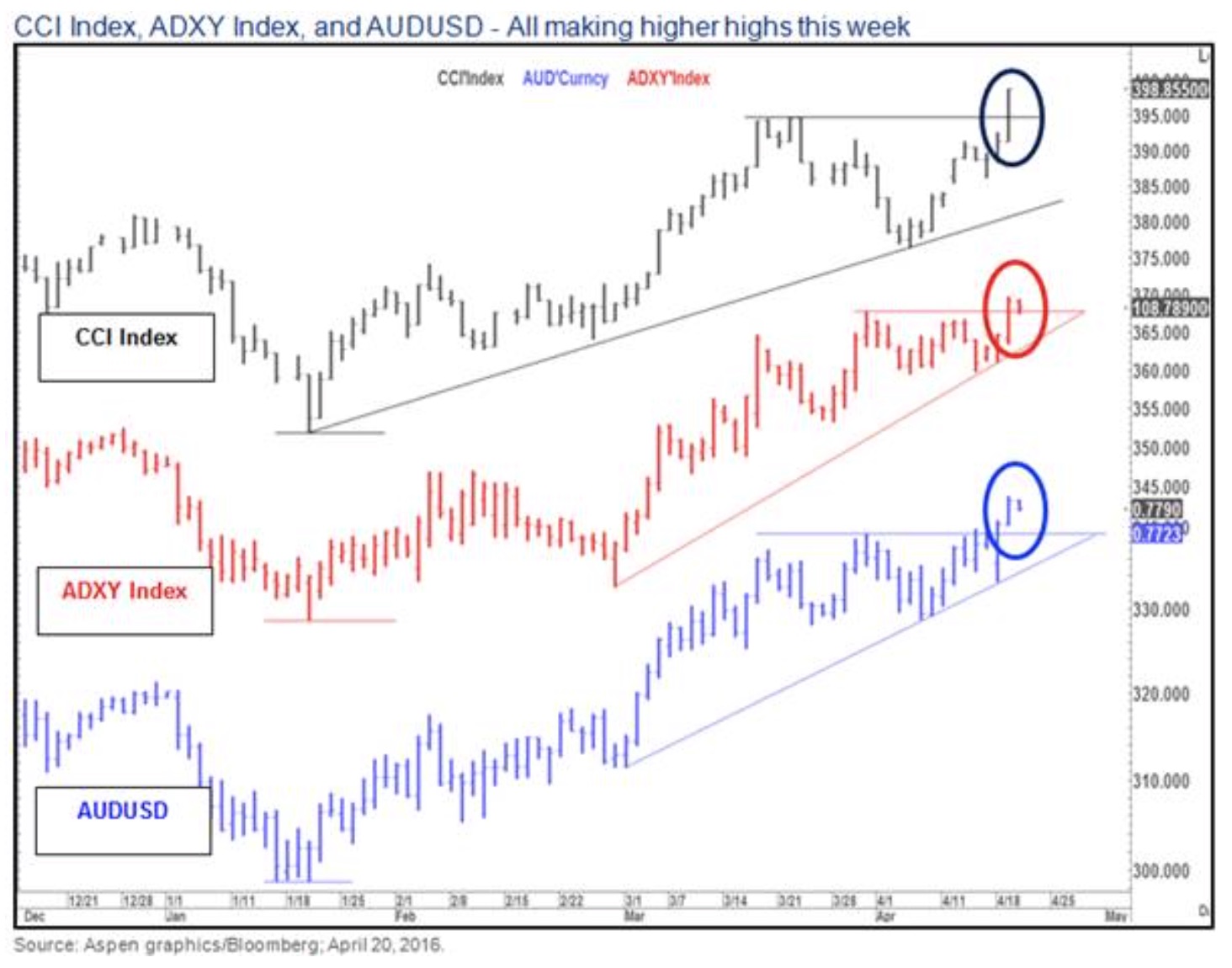 Peter Boockvar continues:  The trade data out of Japan for March were a touch above the estimates but were still weak mostly due to the yen rally. Exports fell 6.8% y/o/y vs the estimate of down 7% while imports dropped by 14.9% vs the forecast of down 16.6%. Looking at volume which takes out the impact of the yen resulted in just a 1% drop y/o/y (but still no growth) in merchandise exports while import volume bounced by 5.2%.

Never one to quit, BoJ Governor Kuroda said to Parliament today that there is “plenty of room” to increase QE or further lower deposit rates and “won’t hesitate” to do so if necessary. Something he said last week. This comment comes as already 70% of Japanese JGB’s have negative interest rates and they already own about 30% of JGB’s. As to the 30% level, Kuroda basically said there is 70% more they can own as he said they own “only about 1/3 of Japanese government bonds” and thus there is “no need to consider limits to BoJ’s QE now.” The BoJ meets again next week but I find it highly unlikely that they move again so soon after the damage done after the last bout of easing. The yen is flat while the Nikkei was up a touch. JGB yields continue to move lower and the 15 yr JGB is just 2.5 bps from joining the other 70% of JGB’s that have yields below zero.

The Shanghai index had its worst day since February 29th as it fell by 2.3%. The H share index was lower by half that. The only thing I saw that was maybe the reason for the weakness was a Xinhua story that while policy “will maintain a certain degree of looseness in the coming months…prudence will feature more prominently than last year.” The underline is mine as the article went on to say that “prudence” means “the authorities will be more cautious when cutting interest rates or RRR and turn to more low profile monetary tools, such as the medium term lending facility, to steer the economy.” The yuan is also lower even after a stronger fix.

As we are now two months away from the UK vote on EU membership and businesses in both the UK and outside of it are saying that the uncertainty surrounding it is resulting in a slowdown in business planning, jobless claims in March unexpectedly rose by 6.7k vs the estimate of a drop of 10k. It’s the biggest increase since May 2012. The ONS who publishes the data said however that they saw no evidence that the weakness was related to the vote but unless they did a questionnaire I don’t know how they would know that.

Also of note, employment for the three months ended February rose just 20k, 40k less than expected and the slowest pace of job gains since June ’15. The unemployment rate though did hold steady at 5.1%. February wage growth ex bonus’ rose 2.2% y/o/y which was unchanged with January and one tenth above the estimate. The pace of gains remain modest but still are running above the .5% CPI print seen for March. In response to the softer labor data, the pound is slightly lower, gilt yields are lower and the FTSE is the only major European stock market that is down.

This is a portion of today’s note from Art Cashin:  Overnight And Overseas – In Asia, Shanghai got dinged badly (down 415 Dow equivalent points). The concern is hints from the PBOC that they may ease up on the throttle. Hong Kong was off a smidge while the rest of Asia was unchanged. Rumors abound that China may package non-performing loans and sell them as asset backed securities. Only way that works is if there are implicit government guarantees. (How do you say Ginnee Mae in Mandarin?)

European markets are mixed, to off a shade. There is a slight backdrop of a “stroll to safety”.

WTI futures expire this afternoon and DOE inventories hit at 10:30 (EDT). I think the probable wind-down of the Kuwait strike and likely reopening of the pipeline argue for fresh supplies and lower prices. Below $40 gets attention. Below $39 moves markets. Gold and metals look a smidge lower.

Consensus – The bulls have a new high in sight and it may be tough to deny them. Crude still important. Stay wary, alert and very, very nimble.