The price of gold just hit a new record high as the US dollar waterfall is accelerating, but here is the major warning signal.

Record High Gold Price, US Dollar Collapsing
July 27 (King World News) – James Turk:  The new record high in the gold price, Eric, means that it’s time to think about the unthinkable. Is the the US dollar in a terminal collapse? And if so, are all the other fiat currencies going to collapse along with it?

Myself and a few others who closely follow monetary events, and are willing to express a non-establishment point of view, have long contended that a collapse in fiat currencies is inevitable. The reason is that there is no discipline in their creation. National currencies can be created at will, and history shows that too much ‘printing’ happens every time. Hundreds of fiat currencies have collapsed into worthlessness because too much currency – bank deposits and paper banknotes – were created by governments and/or their handmaidens, central banks.

Major Warning Signal
The new record high gold price is a red-flag. People across the globe will pay attention to this warning signal.

Rising gold prices mean that more and more people are looking for answers, and they eventually and inevitably come to gold. That means the nature of the buying coming into the precious metals market is changing. I expect the national currency flowing in to buy the precious metals to become a tidal wave, as Pierre Lassonde told King World News, of people seeking the safety of physical gold and physical silver.

Trouble For The Shorts
The long-term accumulators who use gold and silver for savings will still be buying. Another buying force will come from those who are short, which includes the anti-gold forces in governments and central banks. They will continue to spout anti-gold propaganda because it is in their self-interest. They always aim at keeping “The Money Bubble” floating in thin air. This group and others – like specs who do not understand the precious metals and the monetary problems the world faces – have foolishly sold short the precious metals. The last few days is a good example of their panic buying to cover their positions and/or escape their commitments to deliver physical gold or silver.

It probably won’t take too many more months – or maybe even weeks – but I am expecting buying to materialize from a different type of ‘short.’ This group of shorts hasn’t sold anything forward or for future delivery. In fact they don’t yet even understand that they are short. But they are indeed short metal by only owning fiat. That’s what happened from November 1932 (after FDR’s election) to March 1933. Those 5-6 months endured a flight from the paper dollar bill, which happened long after the flight from dollar bank deposits had already begun in 1929. Even though the dollar bill was in theory redeemable, people wanted out of the paper currency because they had finally been awakened to the fraud of fractional reserve banking.

Not Enough Gold
There just wasn’t enough gold back then at the $20.67 per ounce price. Nor is there enough today, even though the gold price is at a record high, from which we can draw two conclusions. First, the gold price is headed much higher in the months ahead. Two, paper currency is not as good as gold. In fact, no national currency can ever be as good as gold because promises are not the same as the real thing, which of course is physical metal.

We need to take a close look at this chart of the US Dollar Index. The dollar is in a waterfall decline.

Waterfall Decline In The US Dollar Is Accelerating 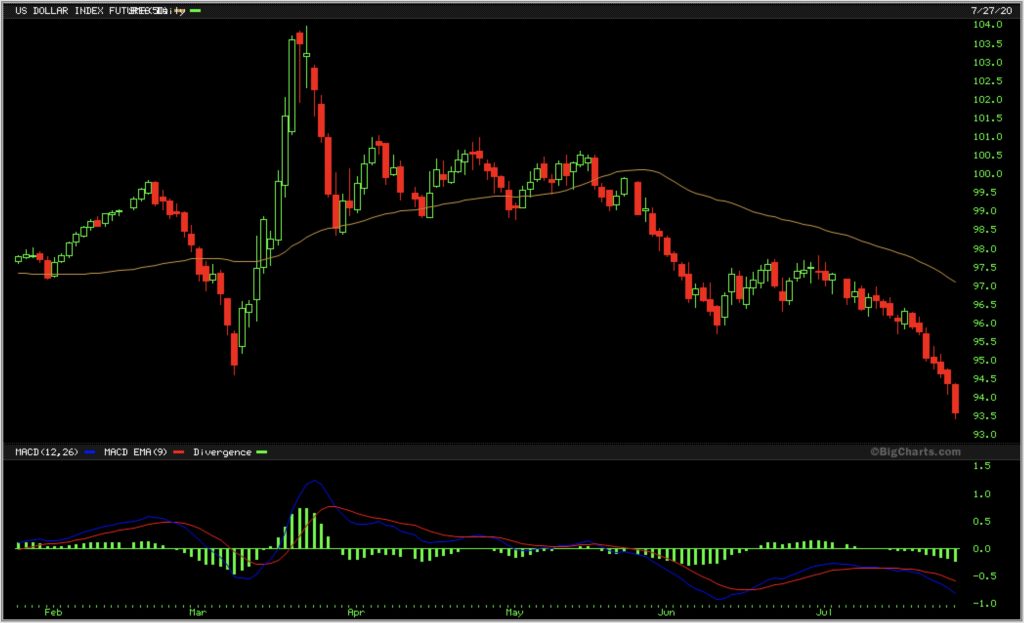 Given this picture of the dollar, we have to ask ourselves two all-important questions. Are we at the beginning of the end of the Federal Reserve dollar? Is the new record high price of gold in terms of dollars telling us that the flight out of all national currencies is gathering momentum? After all, before gold’s new record in dollar terms, gold had already made new record highs against most other national currencies.

Or course no one can answer those questions today because we cannot predict the future. All we can do is reasonably ask ourselves whether or not we are prepared for a collapse in fiat currency, and history has a clear answer. The best way to be prepared is to own tangible assets, and owning physical gold and physical silver is one of the best ways to be prepared and safe for an unpredictable future.

Gold Hits All-Time High, Silver Near $25, But Look At This Surprise
***ALSO JUST RELEASED: Gold Hits New All-Time High As Silver Closes In On $25, But Here Is The Really Big Surprise CLICK HERE.