What a remarkable read on the 4th of July!

“Happy Birthday, America”
July 4 (King World News) – From Jeffrey Saut at Raymond James:  This is my annual “Happy Birthday, America” report, a tribute to Independence Day, because Wednesday our nation celebrates its 242nd birthday. Yet, it was actually on July 2nd when America broke from Great Britain. Two days later, the Declaration of Independence was signed, which is why we celebrate the occasion on the 4th of July. I always commemorate the day by rereading the lyrics from the “Star-Spangled Banner” in honor of our forefathers’ courage. While most citizens know the first stanza of said anthem, few know the other three. Nor do they know the history leading up to the crafting of its words. 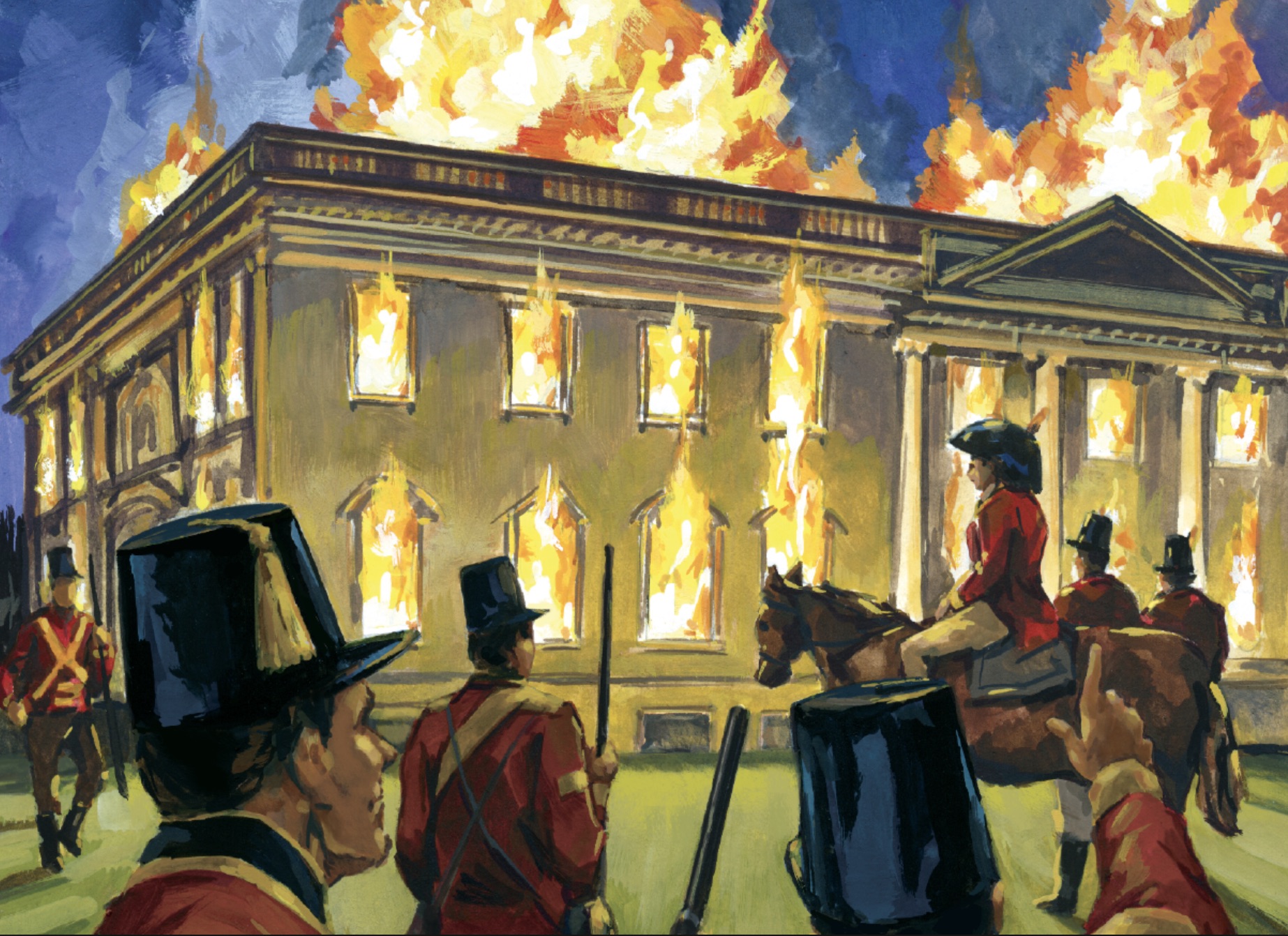 The year was 1812, and the United States was at war with England over freedom of the seas. It was a tumultuous time, as Great Britain was struggling with Napoleon’s invasion of Russia. In 1814, however, Napoleon was beaten and England turned its attention to the United States. While many naval battles were fought, the fight eventually centered on the central part of the U.S. as the British attempted to split this country in half. Washington, D.C. was taken, and then the Brits “marched” toward Baltimore, where a mere 1,000 patriots manned the cannons at Fort McHenry, whose guns controlled the harbor. 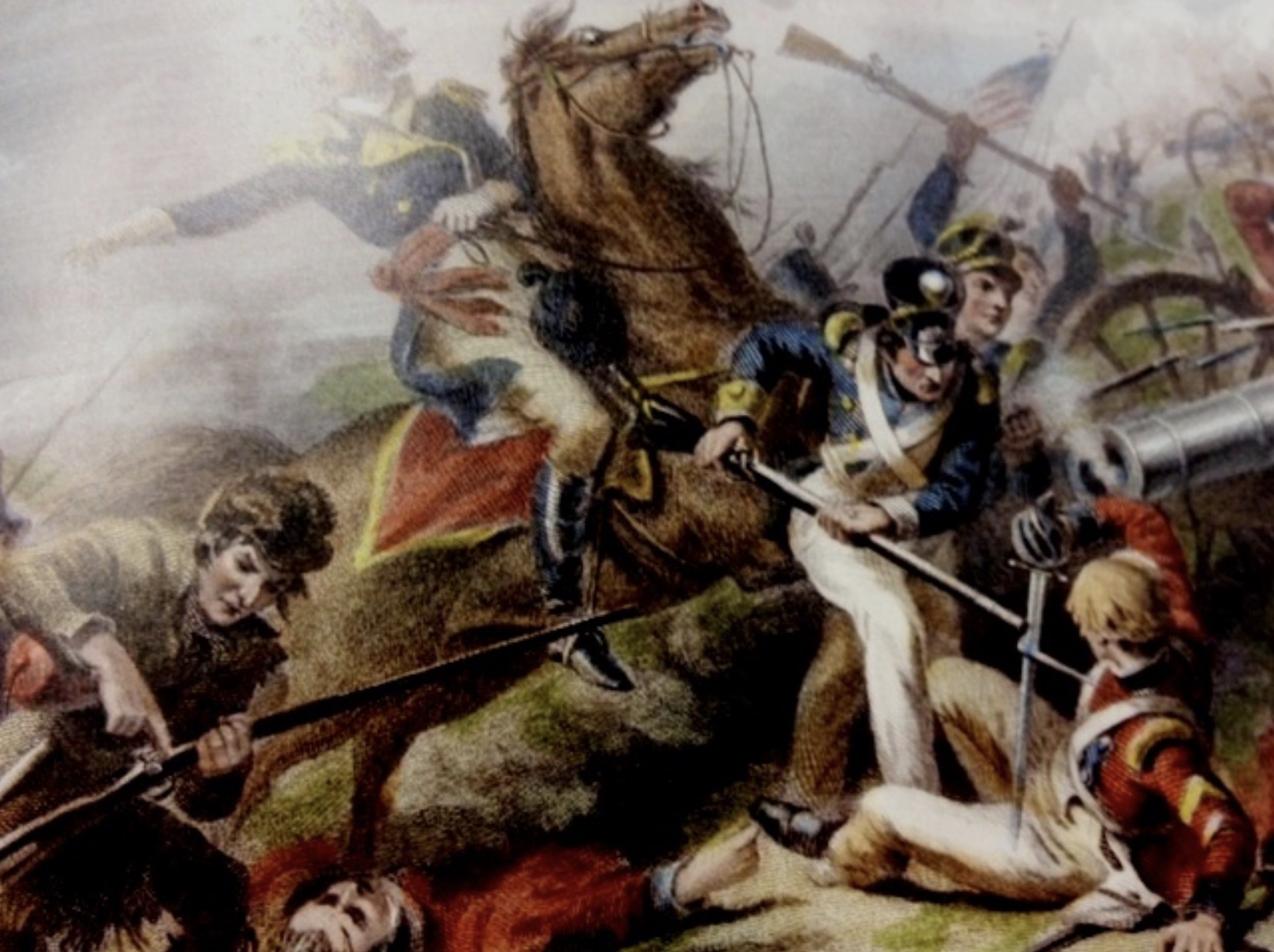 If Baltimore was to “fall,” the British would have to take Fort McHenry. The attack commenced on the morning of September 13, 1814, as 19 British ships began pounding the fort with rockets and mortar shells. After an initial exchange of fire, the Brits withdrew to just outside the range of Fort McHenry’s cannons and continued their bombardment for the next 25 hours. Surprisingly, on board one of the British ships was 35-year-old poet-lawyer Francis Scott Key, who was there arguing for the release of Dr. William Beanes, a prisoner of the British.

Even though the captain agreed to the release, the two Americans were required to stay aboard until the attack on Baltimore was over. It was now the night of September 13 as the bombardment continued. As twilight deepened, Key and Beanes saw the American flag flying over Fort McHenry. 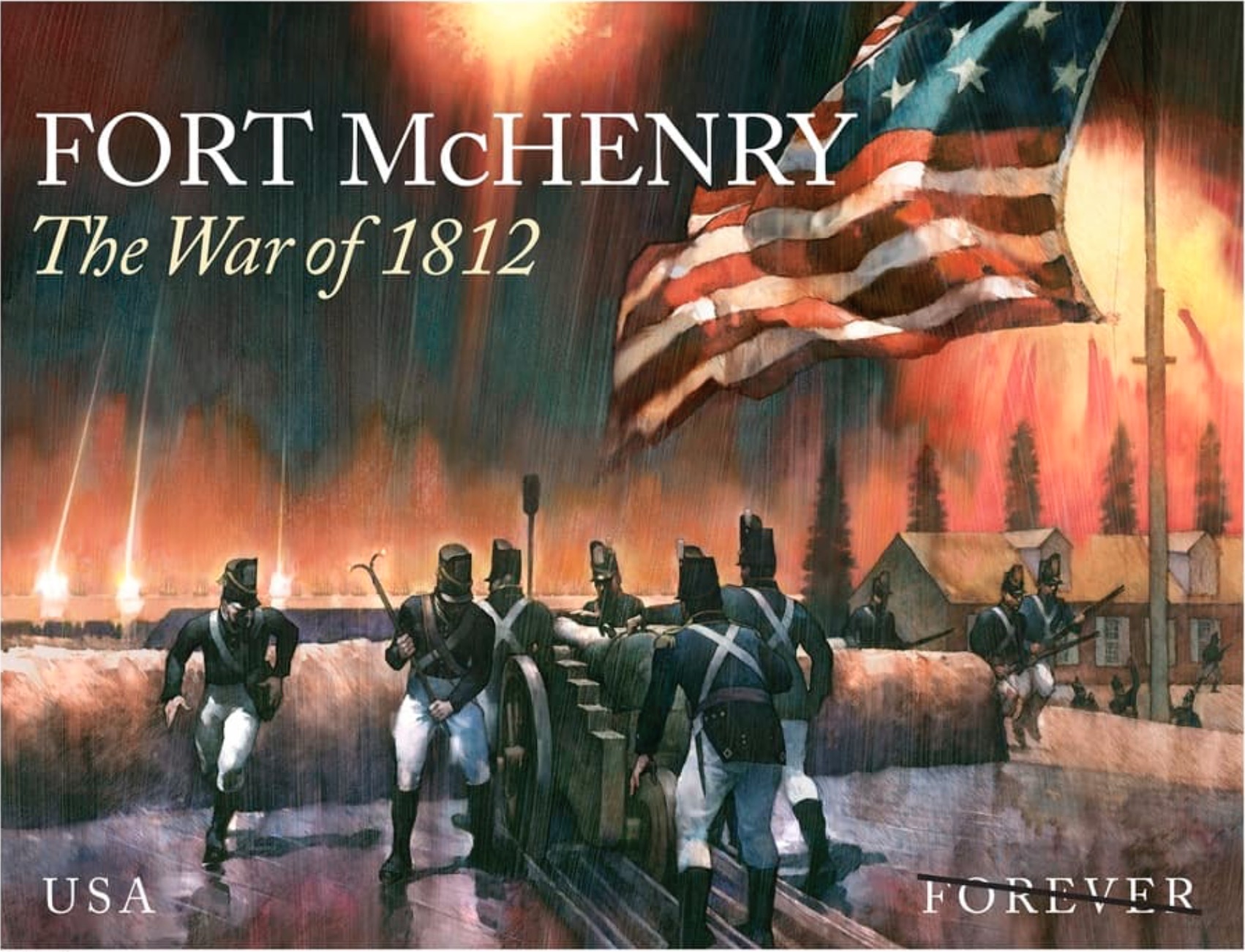 And, as reprised by famed author Isaac Asimov:

Through the night, they heard bombs bursting and saw the red glare of rockets. They knew the fort was resisting and the American flag was still flying. But toward morning, the bombardment ceased, and a dread silence fell. Either Fort McHenry had surrendered and the British flag flew above it, or the bombardment had failed and the American flag still flew. As dawn began to brighten the eastern sky, Key and Beanes stared out at the fort, trying to see which flag flew over it. He and the physician must have asked each other over and over, ‘Can you see the flag?’ 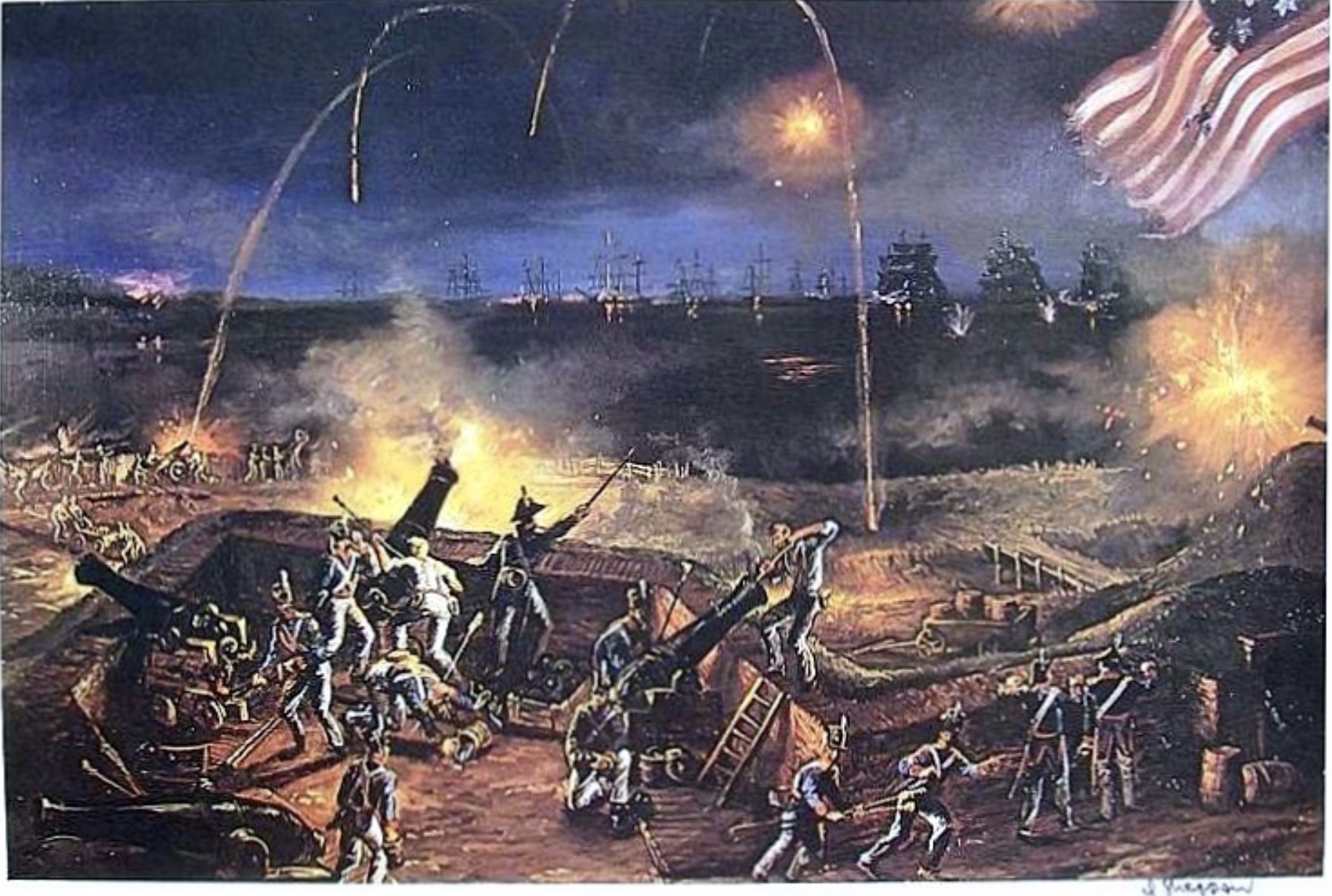 After it was all finished, Key wrote a four stanza poem telling the events of the night. Called ‘The Defense of Fort McHenry,’ it was published in newspapers and swept the nation. Someone noted that the words fit an old English tune called, ‘To Anacreon in Heaven’ – a difficult melody with an uncomfortably large vocal range. For obvious reasons, Key’s work became known as ‘The Star Spangled Banner,’ and in 1931 Congress declared it the official anthem of the United States. 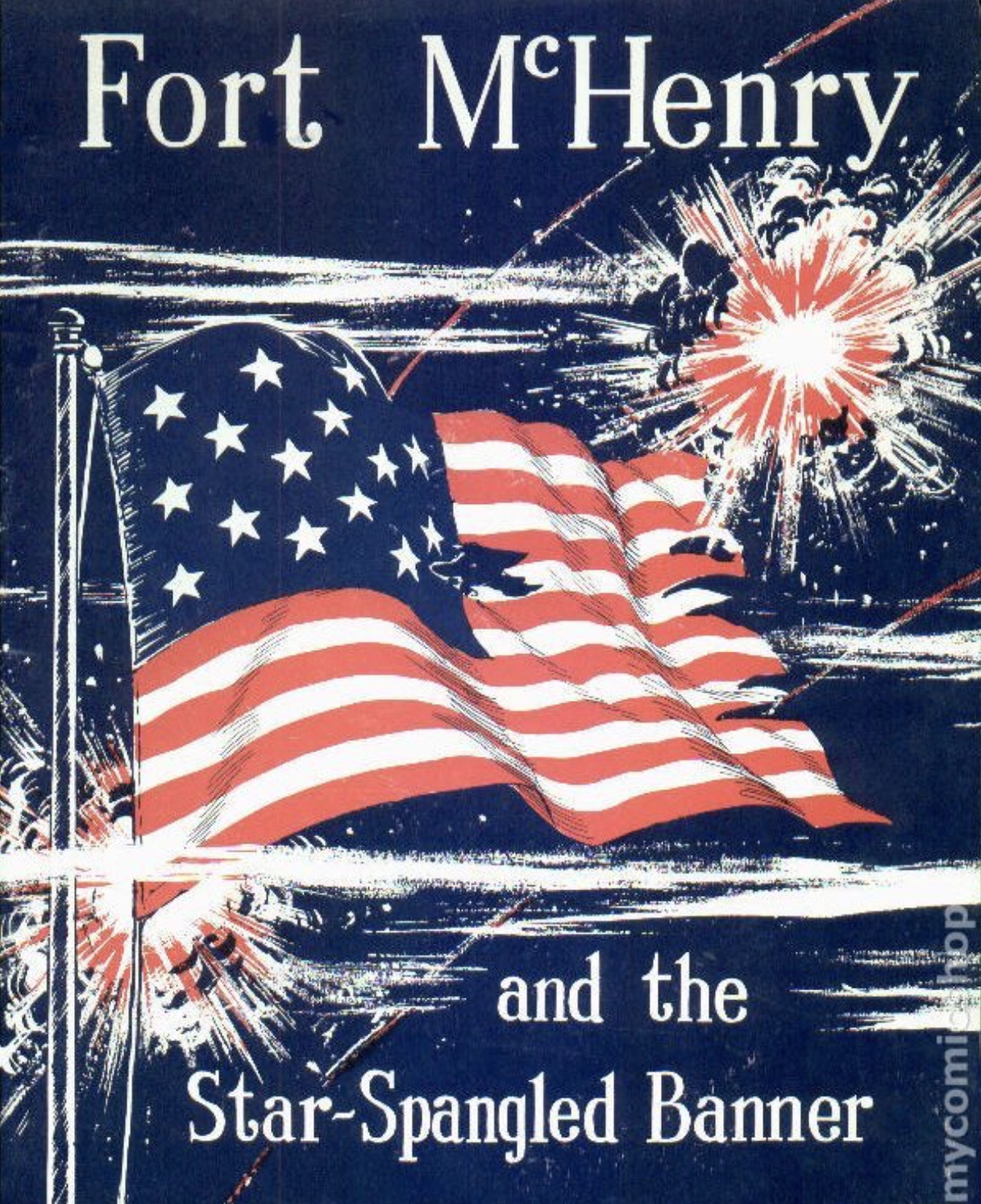 Now that you know the story, here are the words. Presumably, the old doctor is speaking. This is what he asks Key:

Oh! say, can you see, by the dawn’s early light,

What so proudly we hailed at the twilight’s last gleaming? Whose broad stripes and bright stars, through the perilous fight, O’er the ramparts we watched were so gallantly streaming? And the rocket’s red glare, the bombs bursting in air,

Gave proof thro’ the night that our flag was still there.

Oh! say, does that star-spangled banner yet wave,

O’er the land of the free and the home of the brave?

(‘Ramparts,’ in case you don’t know, are the protective walls or other elevations that surround a fort.) The first stanza asks a question. The second gives an answer:

On the shore, dimly seen thro’ the mist of the deep Where the foe’s haughty host in dread silence reposes, What is that which the breeze, o’er the towering steep As it fitfully blows, half conceals, half discloses?

Now it catches the gleam of the morning’s first beam, In full glory reflected, now shines on the stream.

‘Tis the star-spangled banner. Oh! long may it wave O’er the land of the free and the home of the brave!

‘The towering steep’ is, again, the ramparts. The bombardment has failed, and the British can do nothing more but sail away, their mission a failure. In the third stanza, I feel Key allows himself to gloat over the American triumph. In the aftermath of the bombardment, Key probably was in no mood to act otherwise? During World War I, when the British were our staunchest allies, this third stanza was not sung. However, I know it, so here it is:

And where is that band who so vauntingly swore

Their blood has washed out their foul footstep’s pollution. And where is that band who so vauntingly swore

Their blood has washed out their foul footstep’s pollution. No refuge could save the hireling and slave

From the terror of flight, or the gloom of the grave,

(The fourth stanza, a pious hope for the future, should be sung more slowly than the other three and with even deeper feeling):

Oh! thus be it ever, when freemen shall stand

Between their loved homes and the war’s desolation,

Blest with victory and peace, may the Heaven – rescued land Praise the Power that hath made and preserved us a nation. Then conquer we must, for our cause is just,

And this be our motto –“In God is our trust.” 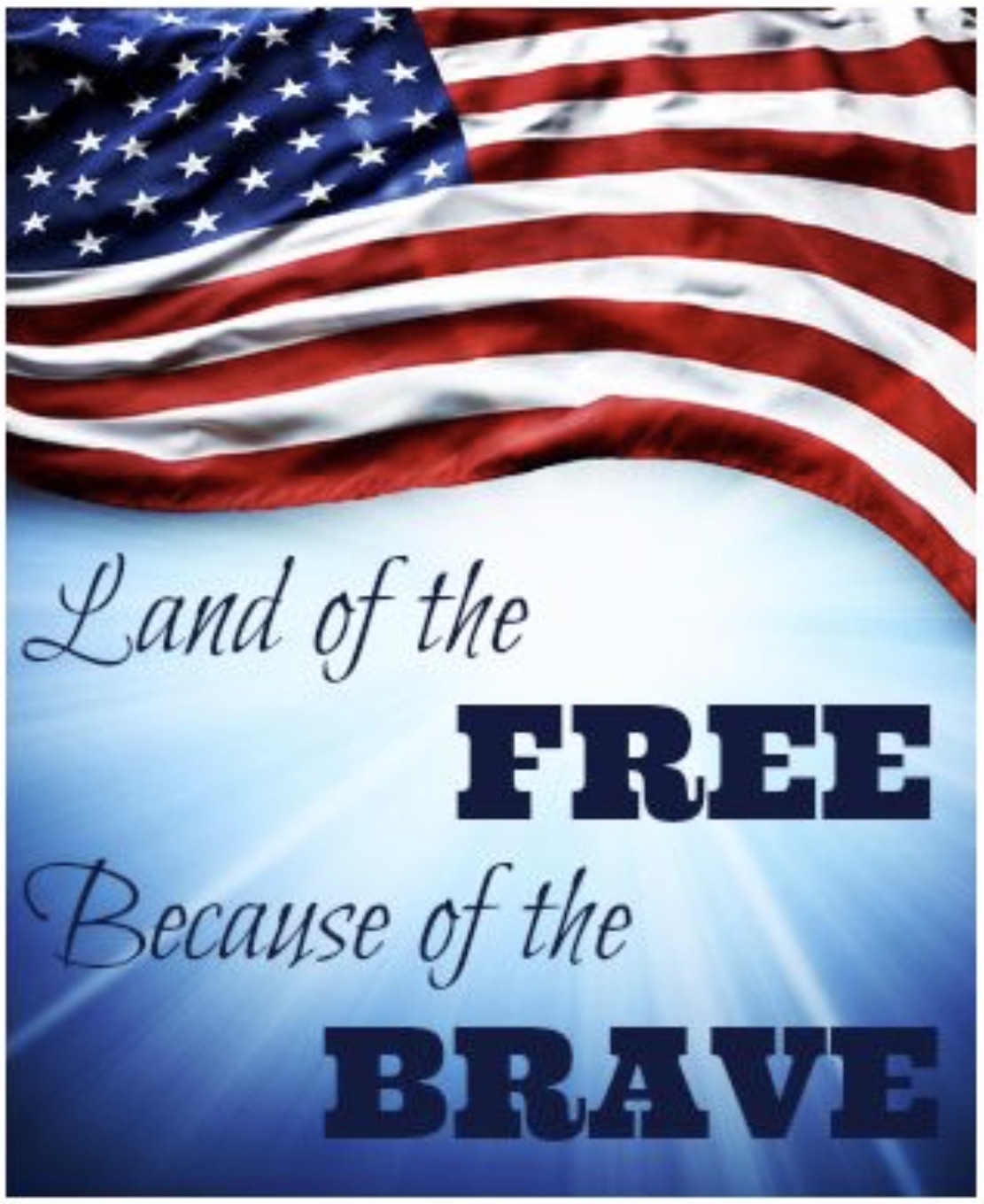 I hope you will look at the national anthem with new eyes. Listen to it, the next time you have a chance, with new ears. Pay attention to the words. And don’t let them ever take it away . . . not even one.

King World News note:  I hope our readers all over the world enjoyed that piece from Jeffrey Saut.  Remember to spend time with your family and loved ones, and if you have freedom, cherish it.

WARNING: This Can’t Be Good…Even More Instability, Plus A Silver Slingshot CLICK HERE TO READ

What A Surprise…This Can’t Be Happening, Plus Silver Close To Being Unleashed CLICK HERE TO READ

SHORT SQUEEZE CONTINUES: Gold Surges Above $1,430 But Gold May Be Set For Even Further Gains CLICK HERE TO READ

WARNING: “Buckle up, folks” – Only 3 Times In History Where Gold Surged While Oil Plunged!