As the world continues to move into uncharted territory, today a 40-year market veteran sent King World News a powerful piece warning that the jig is up for the West and a historic and disastrous transition is now upon us.  He also discussed gold, silver, oil, and what investors should be doing in this dangerous environment.  Below is what Robert Fitzwilson, founder of The Portola Group, had to say in this exclusive piece for King World News.

November 10 (King World News) – Jig Is Up For West, Historic & Disastrous Transition Upon Us

A well-used phrase to signify coming to the end of some illegal activity such as a scam is “The Jig Is Up.” The derivation of the term is murky and old. A lively dance was referred to as a “jig”, and the “Is Up” part of the phrase meant that the music had stopped. In even older times, a “jig” was referred to as a prank or a trick, the phrase signaling an end to those activities.

In markets, the end of a bear market is always accompanied by despair and the panic to sell positions followed by a sudden reversal to the upside. We certainly saw the latter in the past week….

Whether or not the jig is up for the scam known as central bank intervention and manipulation remains to be seen. It would be nice if both were true.

The HUI went on a wild ride being down in the high single-digits leading up to the end of the week, but then staged a huge rally reversing that decline to close ahead 5% for the Friday-to-Friday period. The energy sector also saw tremendous volatility. Natural gas was the big winner for the week, rising a staggering 15%. Perhaps the coming “Polar Vortex” might have helped trigger the move, but no doubt the mechanics of the leveraged markets took over from there.

To us, the triggers for the reversal in the precious metals and energy seemed to coincide with the reported incursion of Russian tanks into Ukraine as well as an attack on a Saudi oil pipeline. Perhaps Vladimir Putin is not going to sit idly by watching the West trash his resource revenues and hard currency accumulations. The pipeline incident was downplayed as a minor event, but it suggests that the recent decline in energy prices is transitory and supplies remain subject to geopolitical risks. In addition, the Saudis reiterated that the $100 price was a fair, long-term level that should dispel any beliefs that the decline in price will be permanent.

OPEC announced this week that total worldwide energy demand will increase 60% by 2040. At the same time, they forecasted supply for crude oil to increase by 20%. That sounds modest, but when you convert it to physical quantities, they project that the world will increase production by close to 21 million barrels per day. It would be a staggering increase, extremely unlikely to be fulfilled in our view. Even if that oil could be found, OPEC is projecting a longer-term price close to $200.

The positive action in the precious metals and mining sector was impressive. The ingredients for a melt up in prices were certainly there looking at volume, sentiment and what one can surmise were massive short positions by some players at the Comex and for those heavily shorting the miners. As Bill Haynes observed about his business in his KWN interview, panic was in the air as some individuals disgorged their gold and silver holdings which were immediately snapped up by other clients.

As to whether the jig us up for the criminal activities of the central planners, it is impossible to know. Prices will have the final say. Technicians will tell us that there is potential for more weakness, but some of those technicians were calling for a 30% decline from what was actually the low in the 2008-2009 stock market meltdown. Just as those touting value in making allocation decisions were hammered by the manipulation, technical analysis must also be viewed with a jaundiced eye. The manipulators are well aware of the traditional levels, beliefs and signals from which technicians make their projections. In markets without price discovery and massive manipulation, both the value investors and the technicians are adrift until the central planners are removed from the equation. If and when that occurs is anyone’s guess. In the meantime, we can only key off of what prices actually do, not an inference from the past.

In the 1970s, we were given the chart below. As you can see, it is called the “Greed/Fear Chart.” 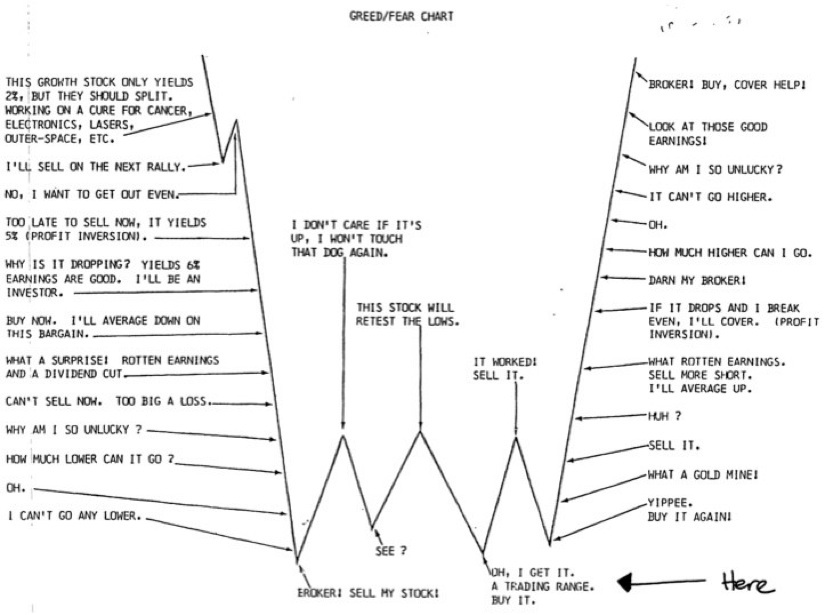 While the chart has a touch of humor, it suggests the emotions and price action traditional seen and experienced in a market cycle. The central planners have distorted the price cycle so far, but it is sometimes useful to revisit the emotional insights from the chart.

We believe that we are bouncing around the bottom and near to the right hand side of the chart. Next week will give us more clues as to whether this is just another false bottom or not, but we are getting close to the real one in energy, metals and the miners. Our job is to find the largest gaps between perceived and actual risks. The gaps in perception regarding those three asset categories are among the widest we have ever seen.

For those holding positions it is not a time to sell if history is our guide. For those with cash to deploy, continuing to accumulate could well be the buys of a lifetime. For those who benefitted from the manipulation by the central planners believing that stocks and bonds are at sustainable levels, beware. You are at the top of the chart. While we are not believers that all stocks are bad by any means, the number that we find attractive from a value standpoint is small. It has been the zero interest rate policy, stock buy backs, central bank purchases and a flood of seemingly cost free liquidity floating the boat. If those conditions go away, the downside will be historic.

UPDATE – KWN has now released the two extraordinary audio interviews with Andrew Maguire and billionaire Eric Sprott and you can listen to them by CLICKING HERE.