In the popular perception of economics, some things are taken to be self-evident. Like the truism that investors should just buy and hold stocks for the long term. Or that prosperity is attainable through hard work, saving and home ownership. Or that a college education is the path to personal empowerment.

But the truth is, our history is limited. The Baby Boomer generation — the 76 million Americans born between 1946 and 1964 — was the first to really live a full lifecycle in the economy as currently structured. Members of the Greatest Generation were paying their mortgages when the value of the U.S. dollar was still tied to gold. Before that, folks remembered what it was like when there was no Federal Reserve — or federal income taxes, for that matter.

Boomers in recent decades benefited from one of the largest increases in household wealth in human history, largely due to factors outside their control, as asset values soared and wages stagnated. For the roughly 80 million members of the millennial generation there is a nagging sense that maybe the boomers enjoyed a one-off boon and that a repeat performance isn't in the cards.

In other words, it's looking like the American Dream — as enjoyed by the boomers — is increasingly unattainable. The evidence is damning.

First, let's look at what the Boomers have enjoyed. 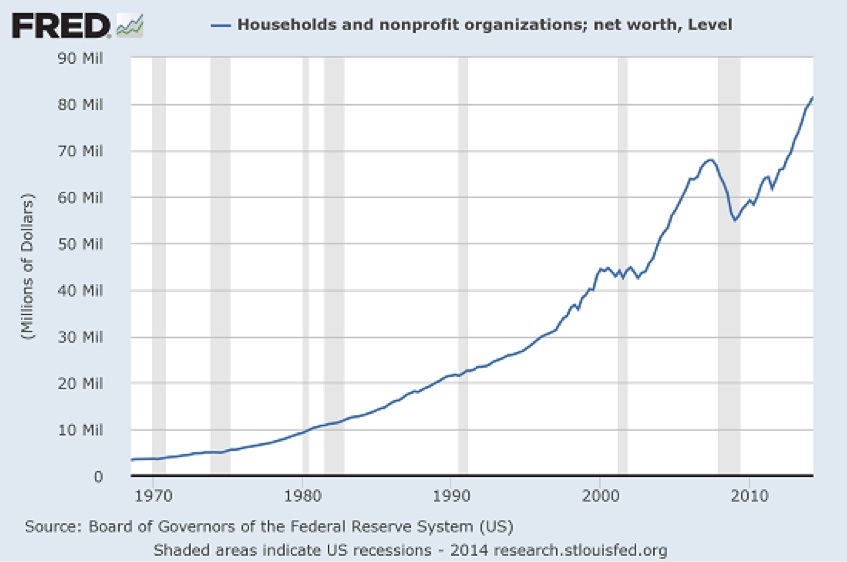 Between 1970 and now, household net worth has more than tripled on an inflation-adjusted basis and now totals $81 trillion on a nominal basis. But this asset price appreciation — both financial assets and housing, the latter of which makes up the bulk of the wealth of Middle America — masks a stagnation in incomes. On an inflation-adjusted basis, average hourly earnings are actually below where they were in 1970. As a result, Americans have grown reliant upon asset price gains to compensate for median household income about 10 percent below the highs reached during the dotcom boom.

The rise has been enabled by the expansion of easy credit terms, a growing share of family budgets dedicated to housing costs, as well as the "trade up" of boomers from one house to another. Consider that in 1984, new homes sold for 3.6 times median household income compared to 5.1 times now.

And this brings us to the pressures hitting millennials as they try to participate in the American Dream as lived by their parents. You may have heard much of this before, but let’s briefly look at the predicament millennials face: For those who are taking the bold step of venturing out on their own, they are faced with trying to buy expensive homes without the benefit of home equity to roll over, and burdened by the stratospheric rise of education costs (which have tripled since the mid-1990s), low starting wages and hefty student loan debts.

Related: Are 401(k) Plans Setting Up Millennials for Pain?

According to the Economic Policy Institute, the wages of young college grads are stuck at levels seen in 1989 on an inflation-adjusted basis. But in 1989, student loan debt totaled roughly $291 billion according to Federal Reserve data. Now, it's over $943 billion, as college is pushed as a way to overcome the financial hurdles young people face. EPI data shows that the share of young high-school graduates enrolled in college or university grew from less than 45 percent in 1989 to a peak of 60 percent in 2012. 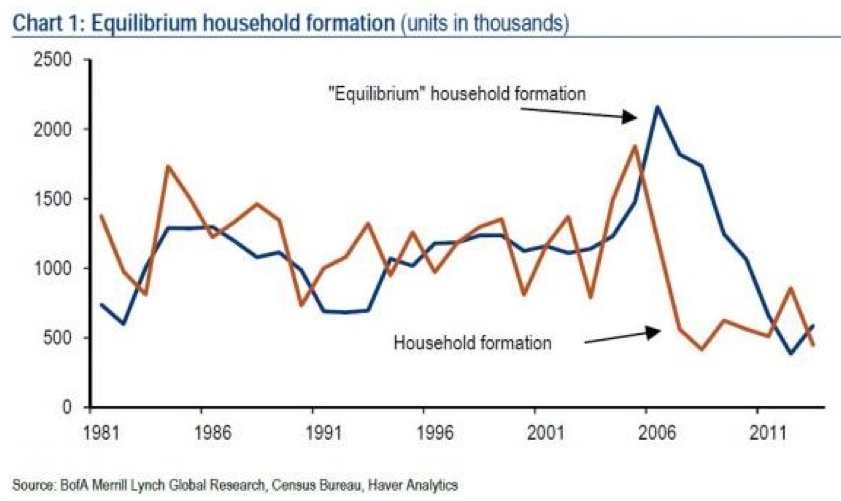 The financial straight jacket has led to a postponement of social maturation. Household formation rates are still down as millennials delay buying a home, getting married, buying cars and having kids — idling instead in an extended adolescence in which they spend on electronic gadgets and vacations while shacking up with friends and family. This generation cares more about experiences than stuff.

Related: Millennials Are Young, Broke and Spending on Luxury

All this is darkening the worldview of young Americans. A separate Pew survey shows they are decidedly less trusting of others. They tend to be independent of political parties and religious institutions. And while they are optimistic that things will get better, their expectations have been lowered: According to an Ipsos Mori Global Trends survey cited by Goldman Sachs, just 25 percent of those under 30 believe they will have a better life than their parents. Compare that to the 80 percent of Chinese youth that believe they will do better.

Before baby boomers dismiss all this as youthful indignation, or engage in some self-adoration, there could be a catch. Remember, asset price gains exist only on paper until the assets are sold. Realizing those gains requires a buyer for every seller.

The trouble is that as more baby boomers approach and enter retirement, they will need someone else — the millennials — to buy their homes and their stocks at a high price. If they don't, those paper gains could disappear.

Indeed, a new study by the Federal Reserve Bank of San Francisco estimates that U.S. stock market valuations could be cut sharply over the next decade because of this: “Our current estimate suggests that the P/E ratio of the U.S. equity market could be halved by 2025 relative to its 2013 level,” the researchers note.

Their study is based on the share of the population in their prime investing years (40-49 years old) vs. their prime selling years (60-69). The ratio of these two age groups is shown in the chart below, and is set to drop not only in the U.S. but in other G7 countries as well. 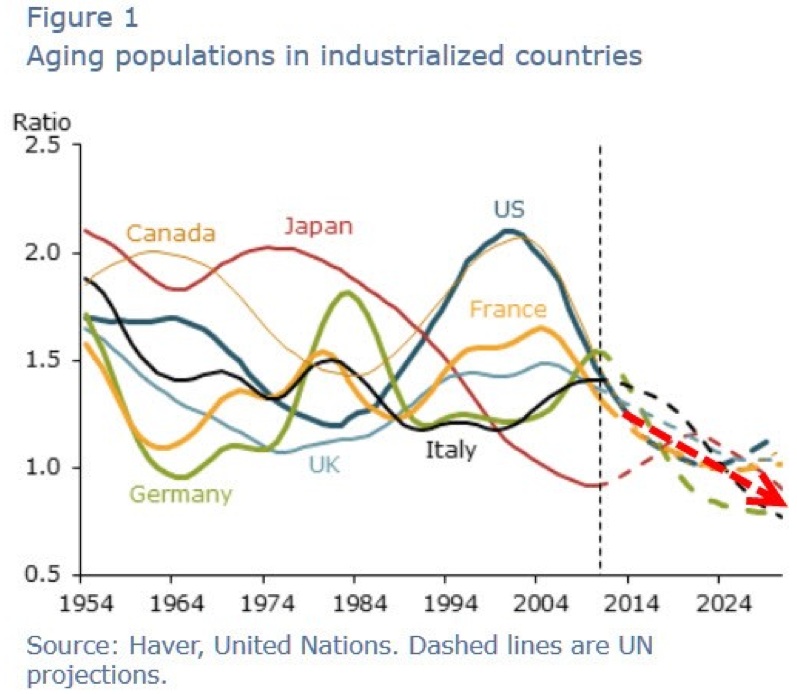 But this troublesome projection could be underestimating the damage. The last time this ratio bottomed in the United States, in the early 1980s, the cyclically adjusted price-to-earnings ratio on the S&P 500 — which takes a 10-year average of earnings to smooth the impact of the business cycle — bottomed at a multiple of 7.2 vs. a current reading of roughly 27. Holdings earnings constant, a return to that level would be worth a 74 percent drop in stock prices.

The good news is that the researchers found that global aging shouldn’t make the demographic headwinds even worse — and boomers living longer may look to draw down their holdings more slowly, shifting the projected balance of sellers and buyers.

Plus, the researchers remind us, “factors other than demographics may play important roles in determining future U.S. equity values.” Private citizens in China, for example, could respond to liberalized policies there by buying more U.S. stocks.

Still, if millennials are too busy buying iPhones, using Uber, taking selfies and sunbathing in Mazatlán, the risks to boomers and the U.S. stock and housing markets are very real.

CLICK HERE TO READ MORE FROM: The Fiscal Times By Anthony Mirhaydari