Today King World News is featuring a piece by a man whose recently released masterpiece has been praised around the world, and also recognized as some of the most unique work in the gold market.  Below is the latest piece by Ronald-Peter Stoeferle of Incrementum AG out of Liechtenstein.

December 21 (King World News) – This Is Why The Price Of Gold Is Surging Today!

An instructive, entertaining and busy year draws to a close and we are given some time around Christmas and New Year to turn inward, gather our thoughts, reflect the past year and think about the coming year. It is a time of contemplation in which we modulate from the rhythm of our fast- paced daily life into a quiet interlude and reflect whether our life still plays in the right tonality, i.e. whether our daily progressing is still consistent with the lofty vision on which we have committed our lives.

This applies not only for our private but also for our professional lives. Concerning the latter, it appears appropriate to gain a little distance from everyday market observations and to try to identify the bigger picture behind the gigantic flood of news and events that we are exposed to everyday. Consequently, we want to introduce you our main ideas on the following pages and we hope that you enjoy reading our first investor’s letter!

Throughout history there have always been periods in which profound political, social and economic upheavals took place. In modern times, the intervals between such events have been becoming radically shorter – the escalation curve of revolutionary events is exponential: things that shape the world today, will already be anachronistic tomorrow. There are many indications that we are currently also right before major upheavals. Since it is particularly important in our industry to be prepared for such changes and to set the course for tomorrow’s success, time diagnosis is a basic discipline to successfully participate in the dynamics that change the world.

The majority of economists and politicians failed in both the anamnesis of the financial crisis and in their diagnosis. Hence, it would be surprising, if they came up with the right therapy. A glance at the current media coverage suggests that the measures taken are far from curative, but on the contrary give an open goal for the next crisis: more quantitative easing, lower interest rates, more government intervention, etc. However, looking at the markets one could come to the conclusion, that things are more or less stable. We do believe that 2015 could make history as the year when myth of central banks’ “infallibility” began to crumble: it began with the SNB abandoning the fixed exchange-rate regime with the euro, then the ECB set a precedent by introducing a quantitative easing program in the Euro zone, then in summer the People’s bank of China devalued the renminbi, which can be seen as a small but symbolic sign for the end of China’s economic miracle.

Ludwig von Mises pointed out the dangers of such a kind of intervention spiral:

“It is essential to realize that what makes the economic crisis emerge is the public’s disapproval of the expansionist ventures made possible by the manipulation of the rate of interest. The collapse of the house of cards is a manifestation of the democratic process of the market. It is vain to object that the public favors the policy of cheap money. The masses are misled by the assertions of the pseudoexperts that cheap money can make them prosperous at no expense whatever. They do not realize that investment can be expanded only to the extent that more capital is accumulated by savings.

They are deceived by the fairy tales of monetary cranks from John Law down to Major C.H. Douglas. Yet, what counts in reality is not fairy tales, but people’s conduct. If men are not prepared to save more by cutting down their current consumption, the means for a substantial expansion of investment are lacking.

These means cannot be provided by printing banknotes or by loans on the bank books. In discussing the situation as it developed under the expansionist pressure on trade created by years of cheap interest rates policy, one must be fully aware of the fact that the termination of this policy will make visible the havoc it has spread. The incorrigible inflationists will cry out against alleged deflation and will advertise again their patent medicine, inflation, rebaptizing it re-deflation.2 What generates the evils is the expansionist policy. Its termination only makes the evils visible. This termination must at any rate come sooner or later, and the later it comes, the more severe are the damages which the artificial boom has caused. As things are now, after a long period of artificially low interest rates, the question is not how to avoid the hardships of the process of recovery altogether, but how to reduce them to a minimum. If one does not terminate the expansionist policy in time by a return to balanced budgets, by abstaining from government borrowing from the commercial banks and by letting the market determine the height of interest rates, one chooses the German way of 1923.”

It defies any imagination what vigorous methods central banks will choose, in addition to those they have already chosen, in order to stand up to deflationary forces. Besides the fact that credit has virtually no price, the Fed has increased its monetary base almost fivefold since 2008. And even though Germany is traditionally a stronghold in terms of inflation concerns, the ECB has recently called for a widening of its QE experiment to at least 1,5 bn euro – and that’s not necessarily the limit!

The market, however, doesn’t seem to regard these developments as very critical. Although they also see worldwide the trouble spots multiply and transform politics into a discipline of constant improvisation, the fact that the monetary system almost collapsed in 2008 appears to be forgotten and they rejoice again at shady risks. Even though politics, and in particular polities, has developed to a permanent breakdown service, the trust in its omnipotence and infallibility seems to be at an all- time high; this is also reflected in highs in equities and government bonds.

They are waiting perseveringly for the much-touted self-supporting economic recovery like Estragon and Vladimir for Godot. The fact that a phase-out “unconventional monetary policies” has so far never succeeded, doesn’t seem to worry the market participants. Anyway the interventions apparently promote short- term thinking even more, which has is meanwhile widespread in the capital markets as the values of financial assets increase and inflation doesn’t appear on the scene (yet), such that an end of these policies would be foreseeable.

What inferences can be drawn for the investment strategy?

While many market participants have been trying to evaluate for years the sustainability of the current recovery, our view in this context is clear: Our belief is that we won’t see any self-sustaining economic recovery in the years to come and that reflationary policy measures of governments and central banks will finally cause a (systematically required) U-turn in the inflation dynamics. We are quite sure that the low in inflation dynamics – and thus the low of the inflation-sensitive investments – will be overcome in the next months.

This view is absolutely contrary to the current consensus and provides excellent opportunities to construct a “macro-contrarian” portfolio.

Rising inflation rates will be the “pain trade” for most traditional portfolios because it catches the majority of investors on the wrong foot. In the light of the currently widespread carefree manner inflation-sensitive assets appear to be extremely undervalued, which makes the hearts of anticyclically oriented investors flutter, who expect an excellent entry point.

With the investment process of our Austrian Economics Golden Opportunities Fund we regard ourselves as well set-up for such an environment. When taking the base effect into consideration, higher price inflation is virtually certain for the next months: 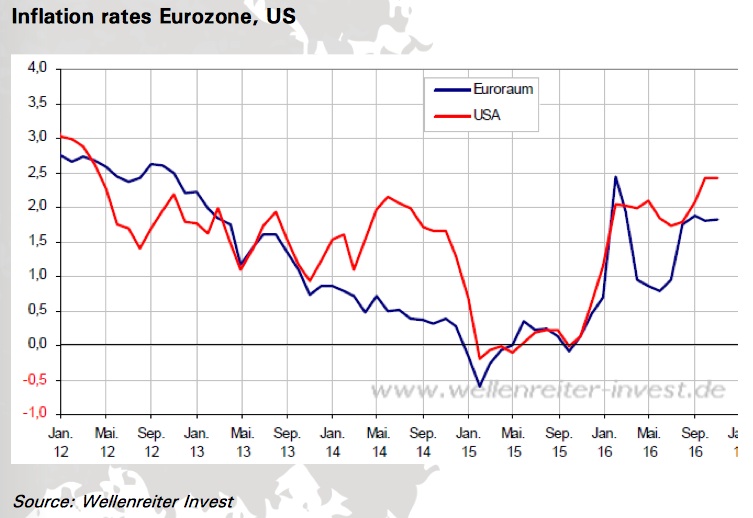 That the Fed is walking on eggshells has become obvious from the complications related to hike rates for the first time in 10 years. This impressively demonstrates that the market is highly dependent on low interest rates. It seems as if the market participants would be conditioned on ever increasing money stimuli like Pavlovian dogs.

Regarding commodities, the fear of the first rate hike could turn out to be a huge “buy the rumor, sell the fact”. Contrary to the common assessment, commodities are the best performers after historical rate hikes of the Fed when comparing different asset classes. 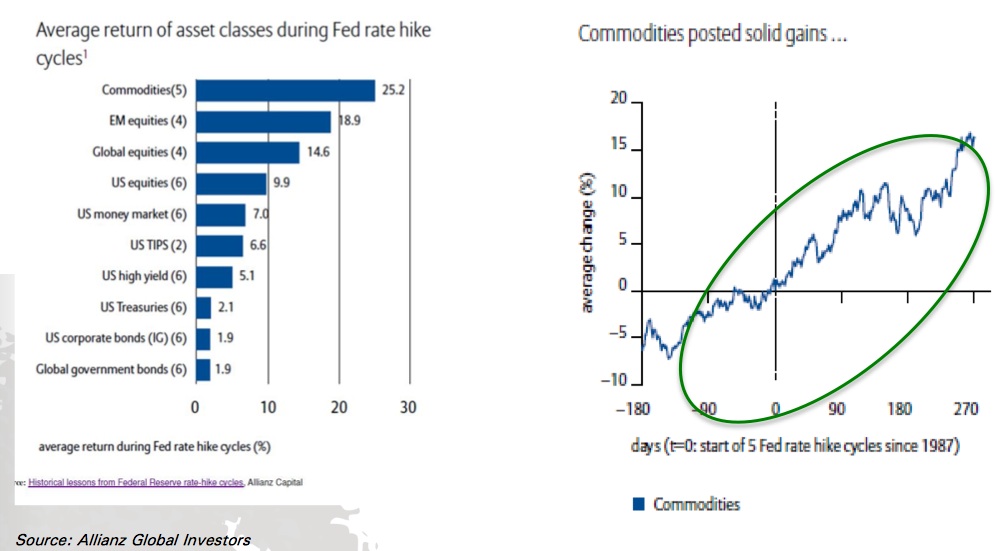 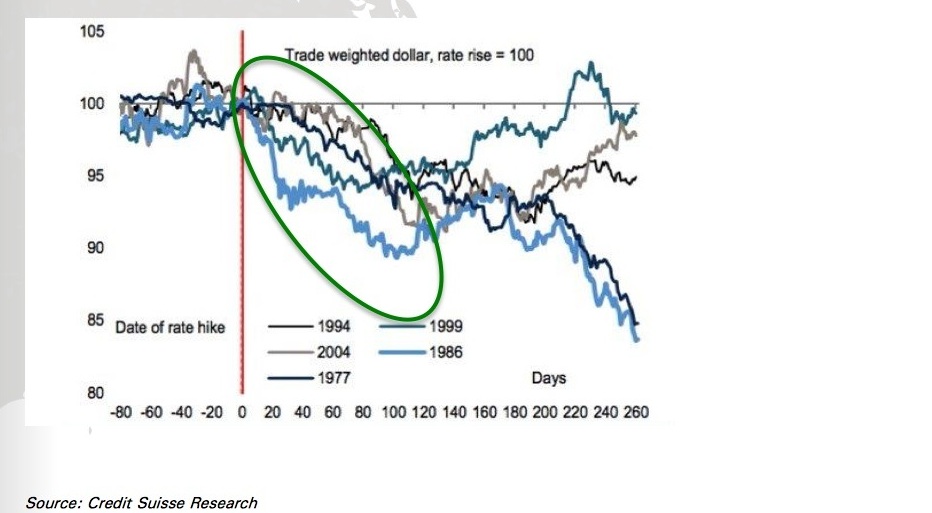 Even though confidence in the equity markets continues to be exceptionally high, the actual performance is anything but formidable. While European stock indices were outperforming American titles, this primarily results from a significantly weaker euro. The term “devaluation boom” hits the bull’s-eye in this context.

With regard to the broad stock market, we think the party is pretty nearly over.

Here are some arguments for this: 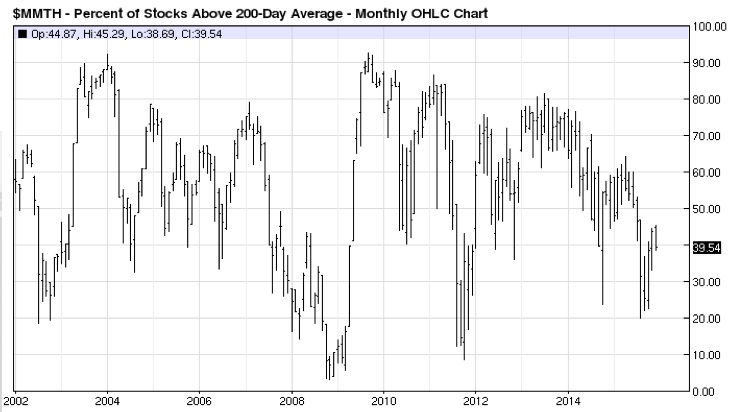 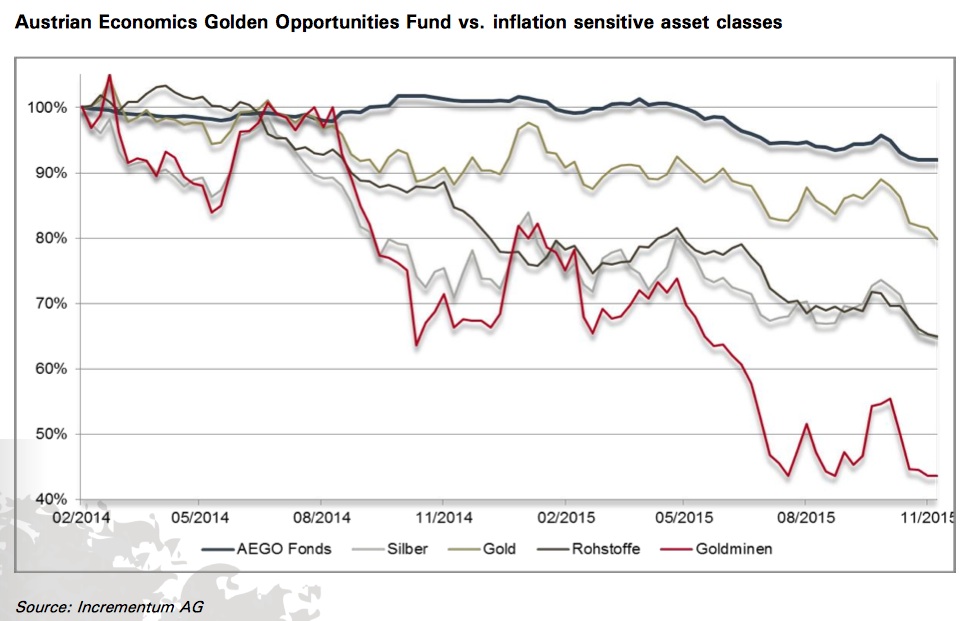 Regarding the development of the Austrian Economics Golden Opportunities Fund, the result is very good on a relative basis. As mentioned before, mining stocks lost between 50% and 80% this year; the same holds true for energy stocks and commodities. We have proven with our investment approach and its consistent implementation that we are capable of significantly mitigating drawdowns of that highly volatile asset class – especially of the mining stocks.

Nevertheless, with respect to our expectations, we have underachieved, and hence are anything but satisfied with the result. We are analyzing the faults conscientiously! Much of the drawdown happened in May and June, when the inflation signal indicated rising inflation and we built up positions in mining stocks. However, the signal proved wrong in that case, as it was misled by silver being relatively strong. In this phase a drawdown of occurred. As the signal turned soon, all positions were liquidated, which was a clear mistake, given the subsequent increase in the segment. Hence, we have learned our lesson!

We would also like to inform you about some internal developments of the past year and about projects for 2016:

An important step for the development of our company has been the inclusion of a new partner, Dr. Christian Schärer, who is a renowned expert in commodity stocks and value investing. He has extended our company’s product range by two new funds, investing in Uranium stocks and Commodity stocks. Another milestone has been the publication of the 9th “In Gold We Trust” report, which has been downloaded more than 1.5 million times. Moreover, we have released our English book “Austrian School for Investors: Austrian Investing between Inflation and Deflation”, for which John Hathaway wrote a wonderful preface. In addition to numerous other publications (including chart books, advisory board transcripts, guest comments etc.) we have held a lot of lectures in Austria and abroad and widely presented our view on the financial markets as well as our investment philosophy.

Furthermore, we are proud of having launched the first Permanent Portfolio Fund in Europe together with Kahlenberg Capital AG. We have adapted the original concept of Harry Browne and adjusted it on the basis of our investment philosophy and the current market conditions. We are confident to hit the spot with this product in Europe.

Although the Austrian school of economics is modest with respect to predicting the future – since market developments are the result of many subjective evaluations and decisions of countless individuals – we would like to formulate some theses for 2016: