Today one of the greats in the business said Maguire is right, China is going to massively revalue gold and make gold part of a blockchain currency.

Maguire Exposed World To Rigged Markets
July 8 (King World News) – Stephen Leeb:  “What a pleasure, Eric, to hear your interview with Andrew Maguire, whose knowledge of the ins and outs of the gold market is unparalleled. He was the first to give solid evidence that major markets can and have been rigged, and his revelations in 2010 about gold and silver made it believable that other major markets could be rigged as well. In fact, I’d argue that without his persistence in 2010, no one would have believed the whistleblowers who blew the lid off the scandals in such major markets as LIBOR and some currency markets. Eric, the bottom line is that Maguire exposed to the entire world the fact that markets are rigged before anyone believed that was possible..

So, I find it very reassuring that my macro approach to analyzing the markets is in sync with Andrew’s view. While Andrew focuses on trading patterns and positioning in the physical and paper markets by various players, my indicators assess a wide variety of big-picture variables, from changes in the S&P to correlations among different commodities and between commodities and paper assets. My indicators, which have a good record, are why in several interviews this year I warned that gold could come down but urged that any dips be taken as buying opportunities.

On Friday, my indicators, which have been bearish since mid-April, turned neutral, and they easily could soon flash a buy signal almost in line with Andrew’s projected time frame for a reset in gold’s price. While my indicators say it is still a bit early to plunge in and buy with both hands, I could easily be printing that advice within the new few weeks or even days. 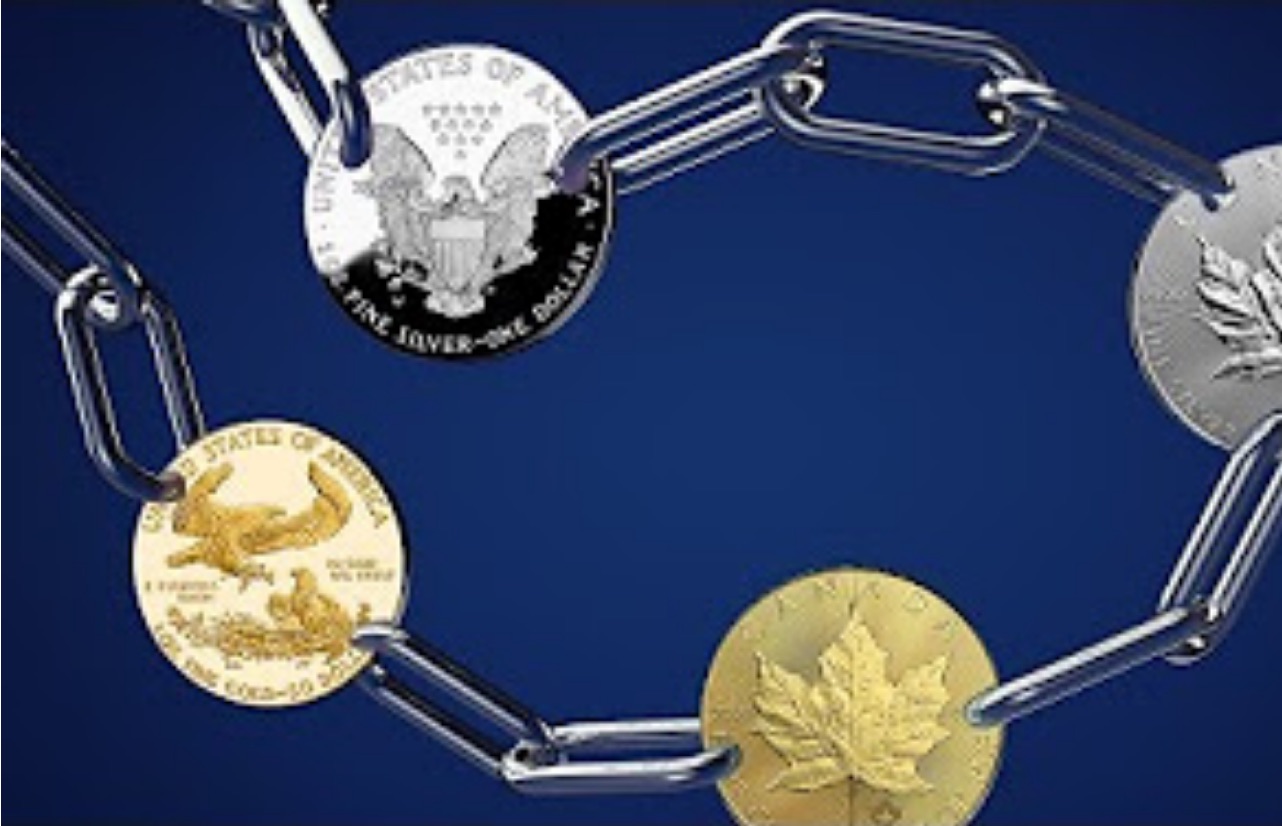 Maguire Is Right, China To Use Gold In Blockchain
I also was struck by Andrew’s points about blockchains that include gold and about the potential for 2017 to be a major bottom for gold. My thinking for some time has been that the Chinese will use blockchains and some form of virtual currency – not bitcoin or anything available today but a currency of their own creation – to replace the dollar. I don’t think anyone can guess point by point what the plan will be, but the currency almost surely will be a basket that includes gold, the renminbi, and perhaps other paper currencies. Whatever its precise form, the goal will be to segue from a dollar-based reserve currency to a gold-centered monetary system. And as I’ve noted previously, this new currency will likely first be introduced as the denomination for trading an Eastern oil benchmark that the Chinese will control.

One question is, why wouldn’t China just use bitcoin and be done with it? After all China by a wide margin has been the largest “miner” of bitcoin. It takes massive amounts of computing power to create bitcoin, which, once created, become part of a blockchain – a database containing the history of all bitcoin transactions. Because of the complexity of the algorithms creating bitcoin, and because copies of the blockchains are distributed to various institutions, the bitcoin market is nearly impossible to hack into as you would have to hack all copies of the blockchains. Creating a phony bitcoin not only is beyond the computing power of almost all hackers, the cryptocurrency would then have to be attached to all blockchains.

Besides their high degree of security, the another reason bitcoin is attractive to investors is that they are limited in number to 21 million. This limit, however, is one of the reasons bitcoin wouldn’t be suitable as a reserve currency. Even at their recent high of $3,000, the total value of all bitcoins was equivalent to a few billion dollars. Not only would it take a Herculean computing effort to break the 21 million barrier, but any effort to create more would dilute the value of existing bitcoin holders and run into fierce resistance by those owners. Moreover, increasing the number would drastically change the underlying fundamentals of the currency.

There’s another and more important reason – bitcoin wouldn’t cut it as a reserve currency, one that can be explained by repeating a story Warren Buffett once told. He asked his audience to imagine an isolated town of, say, 100 people all owning identical homes. The town council decided that each year it would make everyone richer by raising the value of the homes by, say, 10 percent. Eventually the homes, which are pretty ordinary by most standards, carry multimillion-dollar price tags, giving everyone in town a great sense of wealth. Then one day one of the homeowners tries to sell his home to someone from outside the town. And in a heartbeat the residents’ millions of dollars in wealth tumbles by 90 percent.

Similarly, bitcoin’s value resides in the willingness of a relatively small community of bitcoin holders to assign them a particular value. In the case of the homes, it’s the council that determined value. With bitcoins, a small marketplace determines value. But in both cases, there is very little there there.

Just this week Sheng Songcheng, an adviser to the People’s Bank of China, commented:

“Bitcoin does not have the fundamental attributes needed to be a currency as it is a string of code generated by complex algorithms.”

Sheng acknowledged that the technology behind the bitcoin did make it a kind of digital asset, but one distinct from a currency. Most important Sheng also confirmed that the PBOC is studying a virtual currency that could be regulated and function properly.

Now let’s return to Buffett’s anecdote. Suppose each year every homeowner had to add a specified amount of gold to his home’s foundation. That gold wouldn’t merely buttress the physical foundation – it would also would support a minimum value for the house. By the same token, if bitcoin consisted of a notional dollar value plus a fixed amount of gold, it would always have value come hell or high water.

China Blockchain To Include Gold
Creating blockchains made up of baskets of currencies and gold is possible, but to do so – in fact, simply to create the individual cryto-baskets – would require extraordinary computing power. And it would require something else: a trove of gold for which the currency could theoretically be exchanged. Only one country meets these criteria, and no surprise, it’s China.

This year marked at least the third year in a row in which China ranked first as the country with the fastest supercomputers. Indeed, the world’s two fastest supercomputers are in China. Moreover, China has announced that by yearend it will have a prototype of the holy grail of supercomputers: an exascale computer, meaning one that can perform at least a quintillion (a billion billion) calculations per second. Though Chinese technology gets a lot of credit in going from nowhere to king of the mountain in high-performance computing, China also gets an A+ in foresight in realizing that one of the major limitations on how fast a computer can perform is the amount of energy these huge machines consume. By a factor of five or six, China has the most hydropower of any country. As with wind and solar, hydropower requires major upfront expenditures after which the energy it produces is effectively free. And unlike wind and solar, which can be erratic, hydropower is not subject to the whims of weather. It’s ideal for powering computers, the kind of massive computers needed for mining highly complex currencies.

China’s propensity for long-term – in some cases, generations-long – thinking continues to serve it remarkably well. Could 2017 be the year of launch for the near-fantastic bull market in gold that lies ahead? I am not betting my shirt on it, but it wouldn’t surprise me one bit. In my last interview, I said China was likely well aware of the risks America faces and the need to act quickly to avoid being caught up in another meltdown. Even a cursory reading of The Art of War teaches that you should act when no one expects it. And surely with oil prices low (but totally out of whack with what physical oil is worth), 2017 could be the year that China launches its Eastern oil benchmark.

***KWN has now released one of the best audio interviews ever with Dr. Marc Faber that took place on a crystal clear phone line from Asia and you can listen to it by CLICKING HERE OR ON THE IMAGE BELOW.

***KWN has just released the extremely important and timely audio interview with London metals trader Andrew Maguire and you can listen to it by CLICKING HERE OR ON THE IMAGE BELOW.

***ALSO JUST RELEASED: Marc Faber – As The Paper Market Plunges, This Will Be The Big Problem. Also Here Is What I Expect Will Happen To Gold CLICK HERE.