Here is a look at auto market troubles, real estate bulls and bears and more.

Real Estate
December 8 (King World News) – Peter Boockvar:  One more thing on the private REIT story. This is predominantly a net asset valuation issue relative to the sharp adjustments that have taken place in the public REIT sector and the redemptions are just a result of that. Some can blame the Asians for beginning the process but it happens to be rather prudent to sell an asset up almost 10% this year when its public peers are down about 35%. I believe the WSJ yesterday in an article on this said it rather accurately and succinctly, “Real estate funds typically base their valuations on appraisals that can be slow to adapt to changing markets. That has kept fund valuations high even as the real estate market has deteriorated. But eventually, reality will catch up.”

Just some quick back of the envelope math on this and I’m not including all the expenses of owning property but you’ll still get the point. If a fund buys a property for $10,000,000 at a 4% cap rate (which is where many high quality properties were trading at last year), collecting $400,000 of rent and interest rates rise resulting in a new market reality of 5% cap rates, that property is now worth $8,000,000 ($400,000/.05), a 20% decline. What many private REITs are arguing is that rent growth is so strong, particularly in multi-family and industrial, that it is offsetting that cap rate headwind but that has now become a stretch argument as we’re now seeing.

Autos
Let’s talk auto’s, the other very interest rate sensitive sector of the US economy that is now succumbing to the same affordability challenges that housing is. Yesterday Manheim said wholesale used car prices fell .3% m/o/m in November and are lower by 14.2% y/o/y. While this trend is encouraging, prices are still up 39% since February 2020. Most notably out Wednesday was the Cox Automotive Dealer Sentiment Index for Q4 and which fell to the lowest since this survey started in Q2 2017. 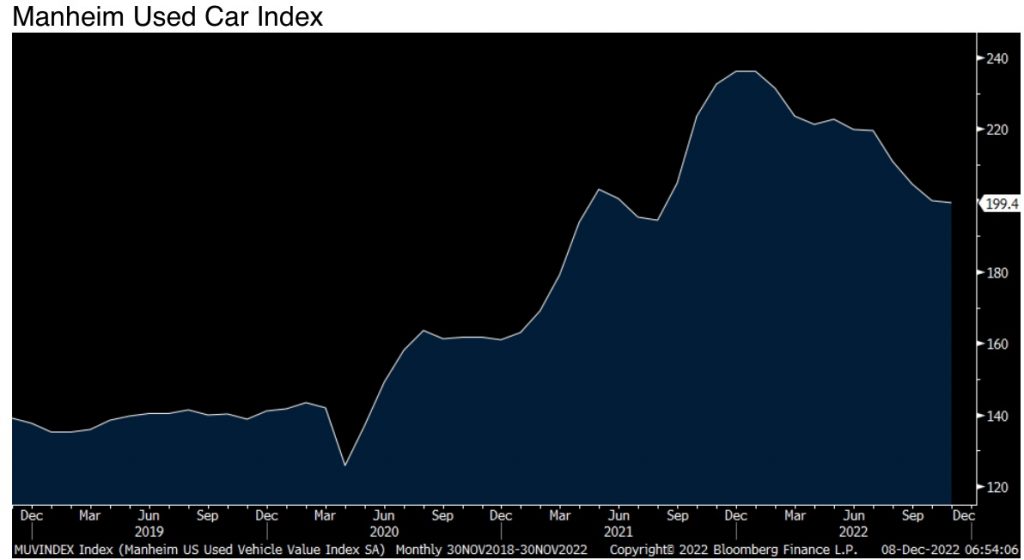 With the breakeven of 50 between expansion and contraction, the index fell to 43, down from 49 in Q3 and lower by 17 pts y/o/y. The Cox chief economist said “High interest rates and a generally slowing economy are clearly weighing heavily on US auto dealers right now. Dealers are normally optimistic, so the drop in the 3 month outlook to a new low in our survey history is particularly noteworthy. As the year began, dealers were telling us about one obvious problem: Inventory. Now, as 2022 comes to a close, it’s all about the economy and interest rates.” 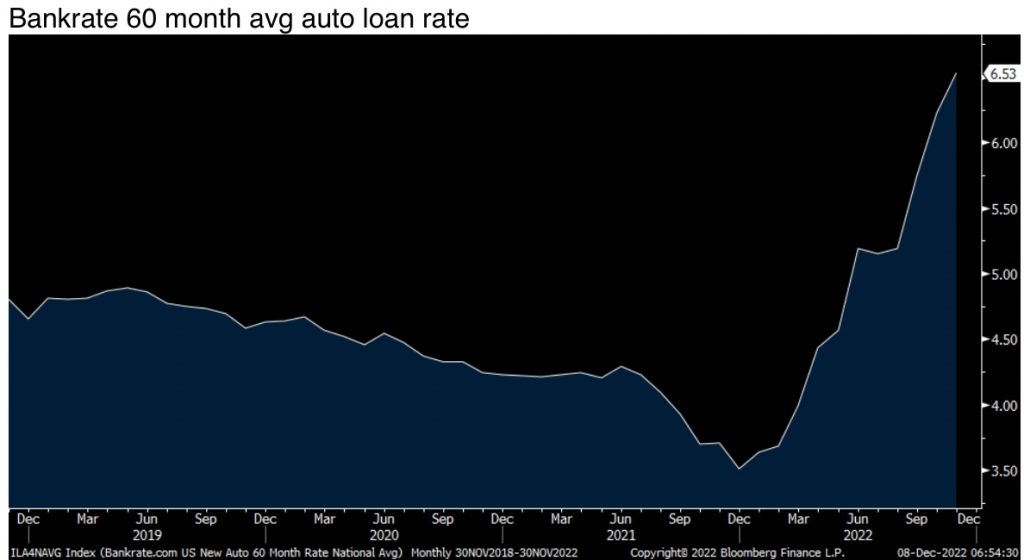 Remember that for many industrial companies, including semi’s, it was the auto sector that was the bright spot in Q3 as inventories were getting rebuilt. That bright light is now fading as inventory levels are closer to normalizing just as consumer demand is now faltering.

Bulls & Bears
A stock market sentiment check saw Investor Intelligence’s data yesterday where Bulls rose to 43.3 from 38.4 and Bears were up a touch to 32.4 from 31.5. That bull figure is the highest since mid August when it got to 45. This data is as of Friday so assume it would be lower if taken today. AAII said Bulls were little changed at 24.7 while Bears were up by 1.4 pts to 41.8. The CNN Fear/Greed index closed yesterday at 58, a few toes in the ‘Greed’ category. Bottom line, while the AAII survey of individual investors are clearly leaning to the Bear side, there is nothing extreme and partly offset by more bulls seen in II. So, I’d call sentiment right now in no man’s land.

As for the stock market broadly this week, if there is a message to glean, it seems it’s now all about the trajectory of the economy and earnings, both weaker, and that we must now deal with the economic consequences of the Fed tightening, not whether the Fed is almost done or not in hiking. Also, QT will continue to be a drag…

Central Banks Still Raising Interest Rates
In the statement yesterday where the Bank of Canada raised interest rates by 25 bps to 4.25%, they are now much more dependent on the upcoming economic data in determining whether to hike further from here. They used the word ‘considering’ in what to do from here while also acknowledging that “Inflation is still too high and short term inflation expectations remain elevated” but also pointing out that the rate hikes to date are working in “restraining domestic demand.” There wasn’t much of a market response as the 2 yr yield and the CAD were both little changed.

For a 3rd straight meeting the Central Bank of Brazil kept interest rates unchanged at 13.75% which is off a level of 2% in early 2021. With their long experience with inflation, they were very quick and aggressive in raising interest rates and that helped the real. Now that the Brazilian government has a new boss, but same as the old boss that likes to spend money, the central bank said “The committee will closely monitor future developments in fiscal policy and, in particular, its effects on asset prices and inflation expectations, with potential impacts on the dynamics of future inflation.”