Today a 40-year market veteran sent King World News an incredibly important piece that says while the war in gold and silver continues to rage, here is a surprising development  This piece exclusively for KWN also covers fascinating developments in the silver market.

The manipulation is founded in economic ignorance and short-term self-interest. Not that history is devoid of such behavior. It was reported that the Spaniards in the New World believed that emeralds were an aphrodisiac. Untold carats were ground up and mixed with everyday beverages. Even today, we “flare” energy resources rather than devise solutions that preserve the fuels for the future.

Infinity is also a problem for the human race. When our ancestors found themselves surrounded by seemingly infinite wildlife, water, forests, oceans and other natural resources, the ignorant belief that uncontrolled consumption would not transform “infinite” into “finite” has resulted in deserts, deforestation, dead water systems, depleted aquifers, species extinction and dying oceans.

Certainly energy is not immune from that debate. There are those who believe in peak oil and those who say that the remaining supply of hydrocarbons is vast. Once again, our ancestors and we have acted as if this resource is infinite, too. Infinity is a big number. The durations of human life and the supply of energy might seem infinite, but really are just subsets of the larger number.

The supply of silver seemed infinite not too many decades ago. The United States alone once had reserves that numbered in the billions of ounces. In recent decades, manipulation of the price per ounce below that which would have been the case in a free market caused those reserves to disappear, sped along with burgeoning new uses in the medical, technology and solar energy areas.

Much has been written about the confluence of an insatiable demand for solar energy production and the current requirement for silver in each installed panel. The chart below shows the growth in worldwide solar generating capacity. 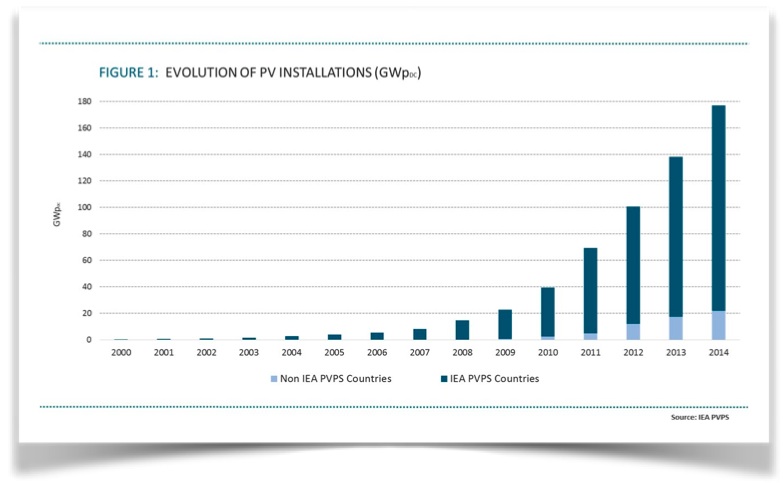 The installed solar power generating capacity has mushroomed since 2003. Believers in free-market economics have drawn the conclusion that the price of silver should have followed the same progression as shown above for capacity. Indeed it did until early 2011. Since then, the price has gone from the high ‘40s to the mid-teens that we see today.

Cui bono? We have tended to focus on the manipulation being driven by the central banks trying to neutralize the historic role of silver as money. While we continue to believe that the manipulation in the price of gold is being driven by that goal, we are now thinking that the ruthless suppression in the silver market is to keep the price low for the solar capacity deployments.

While more solar energy is a noble goal, keeping the price of silver suppressed accelerates the depletion of above and below ground supplies. As we look back and mock the Spaniards for grinding up emeralds, our ancestors will likely look back at our reckless depletion of silver in the same fashion. Instead of a higher price pushing new technology, we are taking the easy route, destroying an incredibly valuable resource for expediency.

Price suppression will continue, one for monetary reasons and the other for solar power considerations. What likely will end the suppressions will be supply disruptions. Russia, China, India and the United States all have an interest in keeping the price of gold contained. The first three want to acquire it, and the United States wants to diminish it. For silver, development of solar generating capacity is a key policy for most of the world’s governments. We expect that to continue, so a blind eye will be given to manipulation at all market and regulatory levels.

What are the implications for investors? It is impossible to predict the outcomes of the war over gold and the dollar as the reserve currency as well as the arrival of supply disruptions. Each investor needs to determine his or her time frame as to these events relative to life expectancies and alternative investments.

For individuals, all one can do is to take advantage of the low gold and silver prices. Energy also fits into that category. Despite the onslaught of mainstream media and Wall Street propaganda, we now know that world demand is accelerating. Patience and perseverance are the watchwords for long-term thinking investors. ***ALSO RELEASED: Greece's Pivot Toward Russia And China And What This Means For Gold CLICK HERE.

Bill Fleckenstein – Global Rout In Bonds Eerily Similar To Period That Lead To 1987 Stock Market Crash, Plus A Bonus Q&A