After a rough start to the summer, gold and mining shares may be set for a major surge.

Gold
By Michael Oliver, MSA (Momentum Structural Analysis)
July 17 (King World News) – There have been three waves of weekly momentum decline, with the third wave not dropping below the low readings of the second wave (red horizontal on momentum). Therefore, momentum did not confirm the price chart violation of the mid-May low (red horizontal on price). 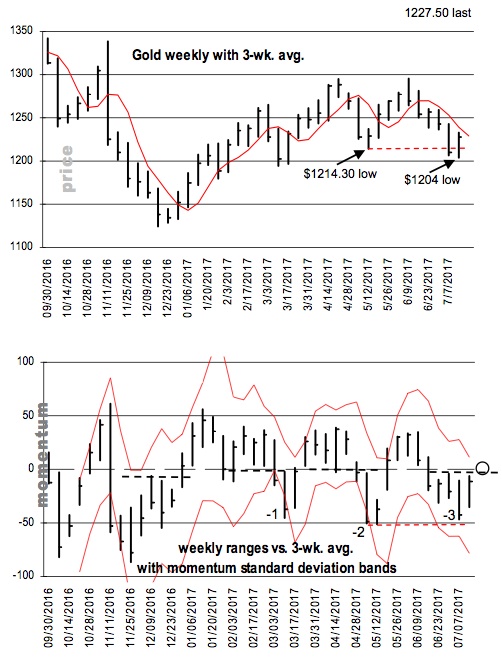 Not out of the woods yet, but last week was a start…

Note that many of the clusters of weekly bar action on the momentum chart establish themselves above or below the zero line, using it as a pivotal support or resistance level. In the case of the past five weeks (below the zero line), there was a rally three weeks ago that crested just short of the zero line, followed by further downside. The ability next week to overcome the zero line/3-wk. avg., especially on a weekly closing basis, will be a good sign that a low is in place. The 3-wk. avg. for next week is $1229. Let’s see if gold can get above it and close the week there. Referencing the August future.

What about a larger signal that this entire process of the past year—of coiling price action—is over and upside is resuming? We identify that signal as a weekly close this quarter in the $1260s. That number is derived from two longer-term momentum charts, not shown here.

(Below is a) GDX (update), which reveals the long-term momentum overhead escape hatch. 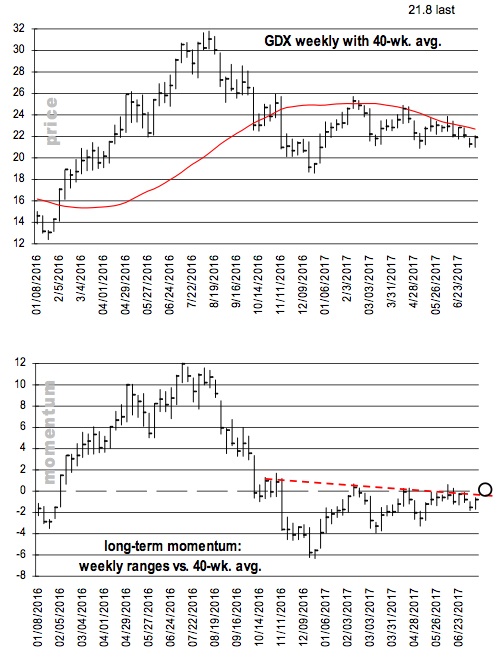 By the way, you’ll notice that 40-wk. momentum has built a nearly flat trigger structure just overhead, while at the same time similar structures on 40-wk. momentum have been built just below the toes of the S&P500, XLY, KBE, etc. An interesting but not surprising juxtaposition.

King World News note:  Watch for the mining shares to lead the charge higher. As Oliver noted, look for a close above the red dotted line on the chart above, especially if it takes place on a weekly closing basis.  That would be an extremely bullish signal for the mining shares as well as gold and silver.

***ALSO JUST RELEASED: Boockvar – What Is Happening In The Gold Market Is Remarkable CLICK HERE.