With crude oil surging nearly $4 a barrel, today one of the top economists in the world sent King World News a powerful piece which predicts the global markets will be taken to the brink and consumers brought to their knees.  Below is the fantastic piece from Michael Pento.

December 19 (King World News) – Will This Take Markets To The Brink & Bring Consumers To Their Knees?

Analysts on every financial news network are screaming about how the lower oil and gas prices will spur on the U.S. consumer and lead to a stronger economy.  It is true that total retail sales rose 0.7 percent in November, beating analysts’ expectations of 0.4 percent.  And the Thomson-Reuters University of Michigan survey of consumers saw its December 2014 “preliminary index of consumer sentiment” soaring to 93.8 — well above last month’s 88.8 reading. Yet, despite this, global markets are throwing off many deflationary signals that should not be ignored.

The first important market signal is the dramatic decline in oil prices.  Since peaking at just over $100 a barrel this summer, prices have since fallen by 45 percent. In fact, the last time we have seen a decline nearing this magnitude was during the financial crisis of 2008….

If this one data point existed in a vacuum, it may be easy enough to attribute it to just an increase in the oil supply.

If happening in isolation, a surge in the supply of oil would lead to less spending at the pump and be a boost to the consumer. However, that is not what is occurring today.  First off, years’ worth of QE and ZIRP have caused massive economic imbalances to occur. Capital spending by the energy industry accounted for 33% of all capital spending in the last few years. States where fracking is prevalent have accounted for all the job growth in the nation. This would never be feasible if oil prices weren’t drive into bubble territory in the first place.

After all, the Fed’s manipulation of interest rates has left investors chasing all kinds of yield traps; such as encouraging investments in Master Limited Partnerships in the oil fracking industry.  The cost to extract shale oil and transport it to a refinery capable of processing it is very high. Therefore, the price per barrel needs to be higher than $65 per barrel just to approach feasibility.

Most importantly, although the U.S. has been able to bring more oil on-line, the rapid decline in oil today has occurred for the same reason it did during the Great Recession. Namely, deflation and a global economic slump. Most of the world outside the United States is either in or near a recession.  Japan is now officially in yet another recession. Germany and France have only managed to narrowly avoid a recession. But Italy has suffered 11 quarters of contraction in the last 13. In fact, growth is nearly 10% smaller than it was before the financial crisis began. Europe’s southern region is leaving the entire EU (18) block of nations teetering on recession.  Then of course we have the BRIC nations– Brazil, Russia, India and China, all with economies either in free fall or decelerating rapidly.

Focusing more specifically on Russia, where the decrease in the price of oil has left the country in dire straits and the ruble in free fall, investors have to wonder about the possibility of a debt crisis a la 1998.  The Russian Central Bank was recently forced to raise interest rates by 6.5 percentage points, to 17 percent. This in an attempt to stabilize the currency.  The sharp decline in the ruble makes international debt payments much more expensive in ruble terms. A credit crunch is looming in 2015 when Russian companies and banks are scheduled to repay $120 billion in debt.  U.S. banks are far from immune, having claims totaling $35.2 billion against Russian entities, according to data from the Bank for International Settlements. Regulatory filings by the top four U.S. commercial banks show they have around $24 billion in exposure to the country.

All this is reminiscent of 1998, when Russia defaulted on its debt and created market dislocations. This lead to the implosion of the hedge fund Long Term Capital Management, which nearly brought markets to the brink before the Federal Reserve stepped in and managed a bail out.

Many are taking a Russian default off the table, as they now have a much improved debt to GDP level.  While that may appear to be the case, we should not take solace in this data point because it is misleading.  Russia has supplanted much of its public debt with quasi-sovereign corporate debt, whose debt levels have been soaring.  The oil-rich nation has seen revenue plummet due to the decreasing oil price. Add in soaring interest rates and the conclusion is easy to reach that Russian GDP will shrink; making the debt to GDP figure far less favorable.

But oil is far from the only indicator that is telling a deflationary story.  Industrial commodities are tumbling along with bond yields.  In fact, the yield on the US 10-Year has dropped 27% this year alone. And sovereign debt yields are at record lows across the planet. Dr. Copper, a barometer for worldwide economic health, has fallen ill, as prices have dropped 15 percent this year.  In addition, the Baltic Dry Index, a global indicator for the cost to move goods by sea, is down 63 percent this year. These are not signs of a booming worldwide economy.

Consumer confidence is indeed at an eight-year high — the highest tally since January 2007 — due to falling oil prices.  But polling the consumer in January of 2007 wouldn’t have been a good prognosticator of smooth times ahead.  The truth is that oil prices, industrial metals, bond yields and risk assets in general are all falling due to a deflationary cycle and global economic duress.

It’s amusing to witness nearly every bobble head in the financial media extolling the virtues of this current collapse in oil prices. WTI crude oil peaked at $147 per barrel in the summer of 2008; and then the stock market and economy spiraled into freefall shortly thereafter. Would it have been prudent for market strategists to claim that the plunge in oil and home prices in 2008 was a harbinger for a robust consumer to appear in short order? Were these same market gurus warning investors of a collapse in consumer spending when oil prices soared from $33 per barrel in the spring of 2009, to over $100 per barrel in July of this year?

Maybe the U.S. consumer knows something the market indicators don’t — and you can throw the Fed and Wall Street into that mix as well. More than likely, economic chaos on a global scale is just around the corner. KWN will immediately be releasing a second written interview with Dr. Paul Craig Roberts. Also, the incredible Dr. Paul Craig Roberts audio interview will be released later today. 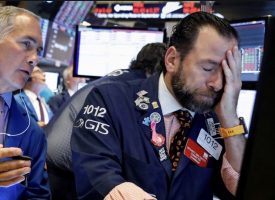