One of the greats in the business just warned investors they must get prepared because we are witnessing extreme currency debasement.

US Money Supply: More Lies from On High
April 14 (King World News) – Matthew Piepenburg at Matterhorn Asset Management (based in Switzerland):  Upton Sinclair famously observed that, “it is difficult to get a man to understand something, when his salary depends on his not understanding it.”

After decades navigating among Wall Street sell-siders or reading the pablum that passes for financial journalism in the retail space, it was always an open secret in the big banks that if you wanted to move up the ladder, don’t rock the boat.

In short: Keep the message bullish, as bears get fired and bulls stay hired.

Such Realpolitik is nothing new; employees, be they working for the New York Times, the Federal Reserve or Goldman Sachs, have a vested interest in staying employed…

This by no means makes self-preserving realists cowards, but it certainly doesn’t make such professionals helpful to those trying to make sense of that oh-so elusive chimera otherwise known as blunt facts and hard truths.

In the halls of financial power, and by extension financial messaging, such self-preservation often entails a bit of open dishonesty, which frequently takes the form of concealing rather than just misreporting the facts.

As the expressions goes: “A man does not sin by commission only, but often by omission.”

The U.S. Fed, like the vast majority of central bankers, has a long history of messaging fantasy over reality in the name of self-preservation and/or maintaining “market order.”

Their most effective lies are typically characterized not just by what they say overtly, but in what they conceal covertly.

Lies of Distortion
The open Charade, for example, of low inflation fictionally published under the U.S. CPI scale is a classic example of omitting certain facts in order to derive at a comforting fiction. We’ve written at length on this topic dishonest inflation reporting.

Such clever distortions of reality are not mere exceptions to Fed reporting and/or Fed speak, but a way of life for policy makers with an Orwellian capacity to be “ministers of truth” despite hiding it from the masses on a daily basis…

Lies of Omission
As for hiding facts, perhaps you’ve noticed something which the main stream media has largely overlooked, namely that the Fed recently decided to suspend the weekly reporting of the M1 and M2 data which typically came out every Thursday at 4:30 PM.

And if you want to know why, the answer is as simple as it is predictable: When policy makers don’t like the facts, they just burry them.

Like a child who tries to hide a bad report card from his parents, the Fed likes to hide bad news from the masses.

Take, for example, the following graph of the rise in the M1 supply, which tracks the level of current hard cash notes, coins, paper money and checking account deposits.

Needless to say, such data represents a pretty bad report card for the Fed’s failed monetary experiment of unlimited QE.

Staggering M1 data like this has many embarrassing and undeniable implications regarding inflationary risk, currency risk, social risk and hence political risk.

The Fed’s solution to the problem? Hide it.

We see the same suspension of weekly M2 data, which comprises the M1 money supply plus the amount of dollars in saving accounts, mutual funds and money market securities. As the graph below confirms, the M2 levels have recently surged by 30% from $15T to just under $20T:

Given that such a dramatic money supply rise points directly to the consequences of extreme money creation which leads to extreme inflation (which, after all, is defined by money supply) and hence extreme currency debasement, the Fed naturally chose to discontinue such weekly reporting of the same.

A Foundation of Lies
Again, such lies of omission are nothing new for a private bank whose very name “Federal Reserve” is itself an open lie, as is the irony of it being headquartered on Constitutional Ave., despite our founding father’s clear and Jeffersonian intent to never allow such a bank within our Constitution…

The Same Ol’ Same Ol’
Be reminded, for example, that as the U.S. was marching straight into the Great Financial Crisis of 2008, (unleashed by Fed Chairman Alan Greenspan’s pre-08 rate cuts), an embarrassed yet truth-challenged Fed decided to fully discontinue M3 reporting in 2006…

In short, we see a familiar pattern: When the data is bad, hide it.

It too was a screaming indicator of trouble ahead, and thus the Fed simply chose to cancel the truth; M3 reporting by the Fed vanished and has never come back.

Cancelling truths, alas, appears to have become a national pastime in a country where even Dr. Seuss is a cultural threat…

The sad truth, however, for those who are willing to report, share and face it, is no great mystery: Grotesque elevations in the money supply mathematically destroys the purchasing power of the underlying currency.

And as for grotesque levels of money printing, just use your own two eyes—The Fed, along with all the major central banks, are trigger happy money printers, and as such are killing all the major currencies with the same QE bullet: 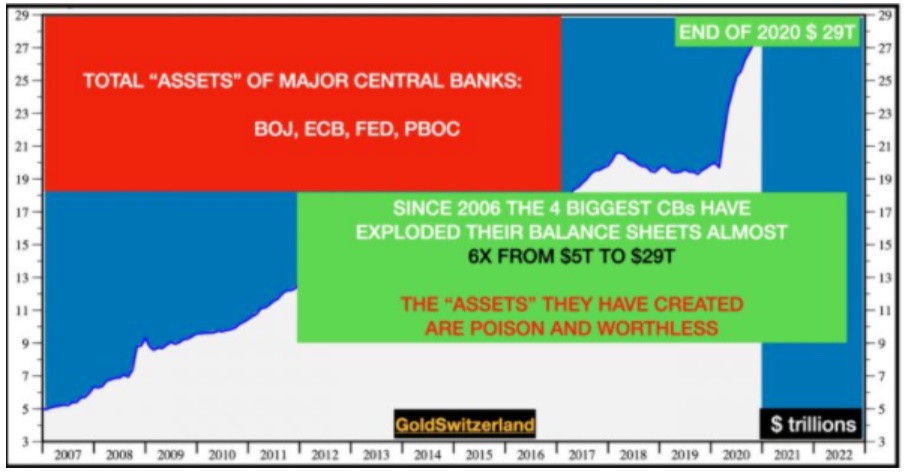 The trillions of U.S. dollars created out of thin air in 2020, as well as the trillions which preceded this printing-frenzy between 2009-2014 (QE1-QE4), have dire consequences on the purchasing power of America’s once sacred but now totally inflated, and hence debased, currency.

By debasing the dollar in your checking account, wallet or portfolio report, this private bank otherwise known as the Federal Reserve is literally stealing money from you by the second, which, of course, is good reason for them to hide the evidence (M1, M2 and M3) of their crime.

Anyone who took a basic econ class in college, for example, knows that exaggerated growth in the money supply is a currency killer.

But apparently the very chairman of our Federal Reserve at the inception of “QE gone wild” must have skipped that class.

At the opening chapters of what is now a money printing nightmare on auto-pilot, former Fed Chairman Ben Bernanke made two promises and two lies in the same breath in 2009.

First, he said the money printing that began in 2009 would only be temporary; second, he promised it would be “at no cost” to the overall strength of our economy.

But as the following graph of the declining US dollar confirmed (while Mr. Bernanke was still in office and preparing for a self-congratulatory book tour), our Fed Chairman was lying.

There was a cost: 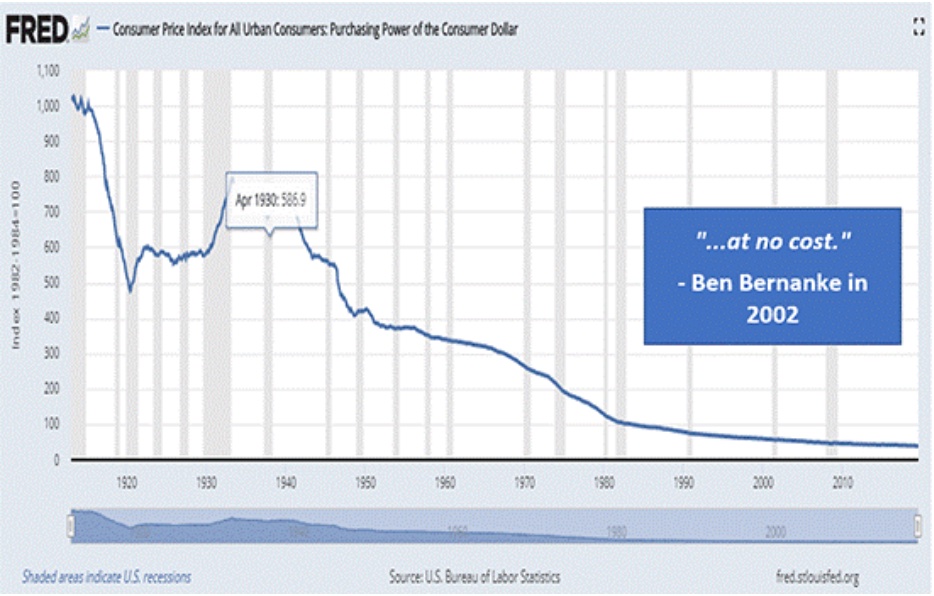 But such lies from on high are no surprise to anyone who can fog a mirror and read a graph at the same time.

Furthermore, the many examples of Fed leaders speaking out of both sides of their mouths (as circumstances demanded) are as disturbing as they are comical. Below are just a few additional highlights:

“You will never see another financial crisis in your lifetime.” — Janet Yellen, spring 2018

“I do worry that we could have another financial crisis. ″ — Janet Yellen, fall 2018

“There’s no reason to think this (bullish) cycle can’t continue for quite some time, effectively indefinitely.” — Jerome Powell –2018

“The US is on an unsustainable fiscal path; there’s no hiding from it.” — Jerome Powell–2019

With the foregoing facts before you, are you still struggling with trusting the Fed? Do you still think their 0 in 10 record for properly forecasting and avoiding recessions is grounds for confidence?

Do you still think the Fed has your back as risk assets rise to bubble levels never seen before in the history of capital markets?

Do you still think this private bank masquerading as a public office and public servant is indeed serving the ever-debasing dollar in your pocket?