Here is the latest Investors Intelligence report along with the all-important sentiment chart:  The strong index rally from mid-October lows continued. Friday's finish showed the primary averages either close to or just above their Sep peaks, with quick rallies of 10% or more in just over two weeks. Indicators also gained more ground with some short term charts reaching overbought territory. Those are not yet broadly shown and prior tops are still above the current levels. They show moves from their worst oversold lows since late 2011. Most newsletter editors are technical oriented and noted that action, with further optimism shown and more buying. The bulls are again nearly lofty readings, pointing to fully invested stances and market tops.

With a second large weekly increase the bulls were 54.6%, up from 47.0% a week ago. That is up 19.3% from the reading before that and nearly back to the 57.6% bulls at the start of Sep. The bulls hit their 2014 high at 62.6% early Jun. The very fast index run back to highs and longer term indicator improvement means we may see another reading above 60% before too long. Bulls above 50% show increasing risk while +60% levels point to near fully invested outlooks that usually precede a stock market top. Their low two-weeks ago showed they had raised cash.

There was also another drop for the bears to 15.1%, from 16.3% last issue. The great majority of both readings are perma-bears- who have steadily maintained a negative outlook this year. Their main mantra was when the Fed bond buying ends the market selloff will begin in earnest. Now that announcement has occurred and they are developing other negative scenarios.

After falling more than 6% the editors projecting a correction were 30.3% from 36.7% last time. The reading before that (46.5%) was a 30-year high. Some of that group expected a broader market retreat but the strong recovery has convinced many to shift back to bulls and suggest new buying. We quote a few shifts below. The modern method of newsletter dissemination means they can change options more frequently and much quicker than years past. 20 years ago print schedules and mail delivery meant opinions were more considered and were defended for weeks/months.

The spread between the bulls and bears surged again, hitting 39.5%, from 30.7% and 17.1% the previous two weeks. That mid-Oct figure was near positive levels, down sharply from late Aug and early Sep. Differences over 30% are a worry and they ended just below that signaling major caution at 40%+. The two-week ago spread was a low since Sep-2013 when it was expanding from the favorable reading of 13.4% that Aug. That was close to the 10% (or less) reading that allows for broad buying. Bears haven't outnumbered bulls (a negative spread) since October 2011. 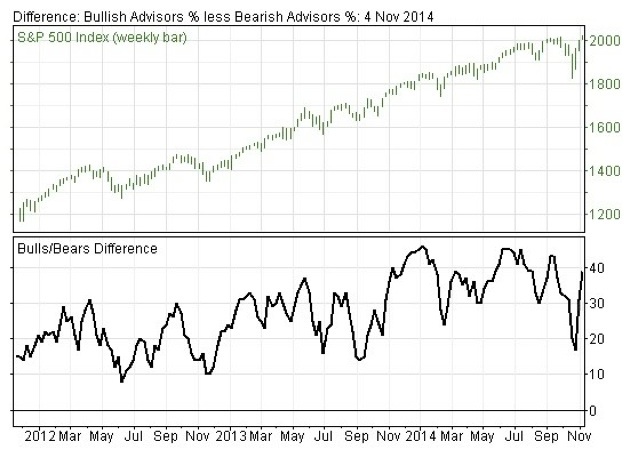 UPDATE – KWN will be releasing interviews all day today.